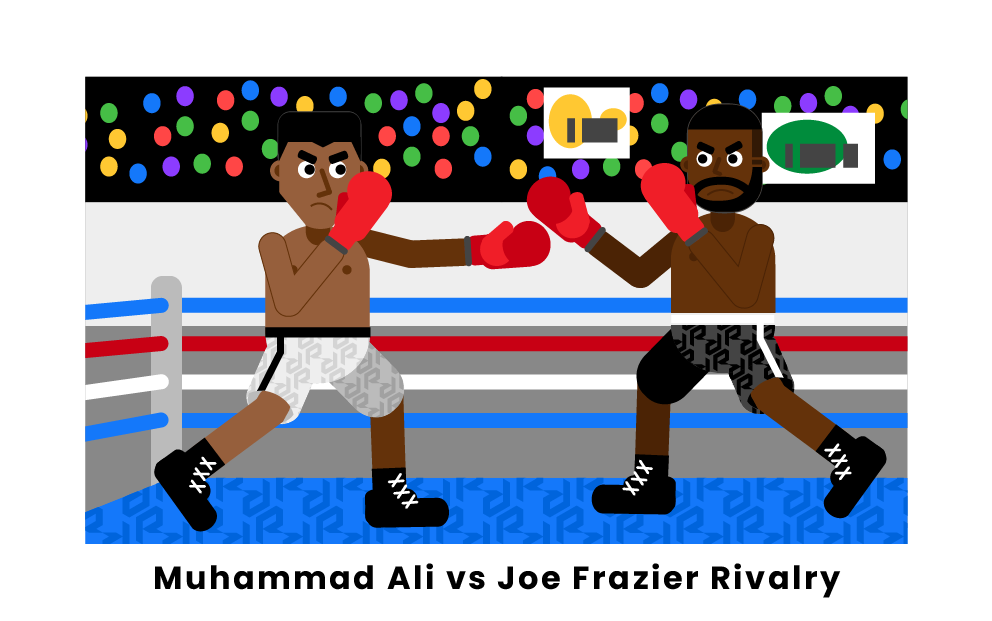 One of the greatest rivalries not only in boxing but in all of sports history, the three-fight saga between boxing legends Muhammad Ali and Joe Frazier would go on to define the careers and lives of these boxers both in and out of the ring.

What started as one massively anticipated battle between two up-and-coming undefeated boxers in Muhammad Ali (31-0) and Joe Frazier (26-0) would eventually become one of the greatest rivalries in boxing and the sports world. The first match for the heavyweight title was held at Madison Square Garden in New York City, 1971 and was one of the most popular sporting events at the time. It featured Muhammad Ali, who, before his rivalry with Frazier, had notably refused to serve in Vietnam after being drafted and winning an Olympic Gold medal for Team USA during the 1960 Olympic Games in Rome. His opponent was rising boxer Joe Frazier, considered the real-life "Rocky," due to his training in Philadelphia. He had won all 10 of his first fights by knockout. The tension leading to the battle between the two boxing giants was palpable.

The first fight between the two legends did not disappoint and was won by Frazier. After a 15-round slugfest, Frazier was declared the winner by decision. Many credit this victory to him knocking Ali down in the 15th round. The fans demanded the second match between the two after the initial fight’s massive success, and in 1974 the boxers yielded to their demands. It again lived up to the hype as, this time before the battle, Ali called out and mocked Frazier for his injuries from the first fight. From there, things got personal. Ali won the rematch after another 15-round war, which set up the trilogy's finale.  This epic showdown saw the boxers sit at 1-1 record-wise head to head, and the tiebreaker that would take place in 1975 in the Philippines, leading to it being nicknamed "Thrilla in Manila." After both fighters' valiant efforts, Ali won the third fight and the series between the two legends after the referees stopped the fight in the 14th round due to Frazier's injuries.

Why were Muhammad Ali and Joe Frazier rivals?

Due to growing up in different backgrounds and the narrative that the media was constantly pushing, the rivalry between Muhammad Ali and Joe Frazier was happening regardless of their decisions. Both fighters made comments outside the ring to help further incite the rivalry between them, including Frazier's comments on Ali's financial ability to get a lawyer and dodge the draft and Ali's words on Frazier's injuries before their initial rematch.

When did the rivalry between Muhammad Ali and Joe Frazier start?

The rivalry started before their first fight actually happened and was initially ignited by Frazier's comments regarding Ali's decision not to participate in the ongoing Vietnam War. Before this, the two were known as friends in a sense, and after the media frenzy and their first fight, which took place March 8th, 1971, at Madison Square Garden in New York City, the rivalry was on. This hatred towards each other would last for quite some time, and it was not until they were both much older that they eventually reconciled.

What was the “Thrilla in Manila?”

The "Thrilla in Manilla" was the massively anticipated finale between Ali and Frazier. Unlike the previous two fights held at MSG in New York City, this one would be hosted in the Philippines; the match was fought in a ring that some claimed was almost 109 degrees Fahrenheit. This hot and humid environment exhausted the fighters quickly, and the fight became a war of attrition. The battle ended with Ali being named the victor after Frazier's trainer called it off due to the injuries sustained to Frazier's eye and its impact on his vision.