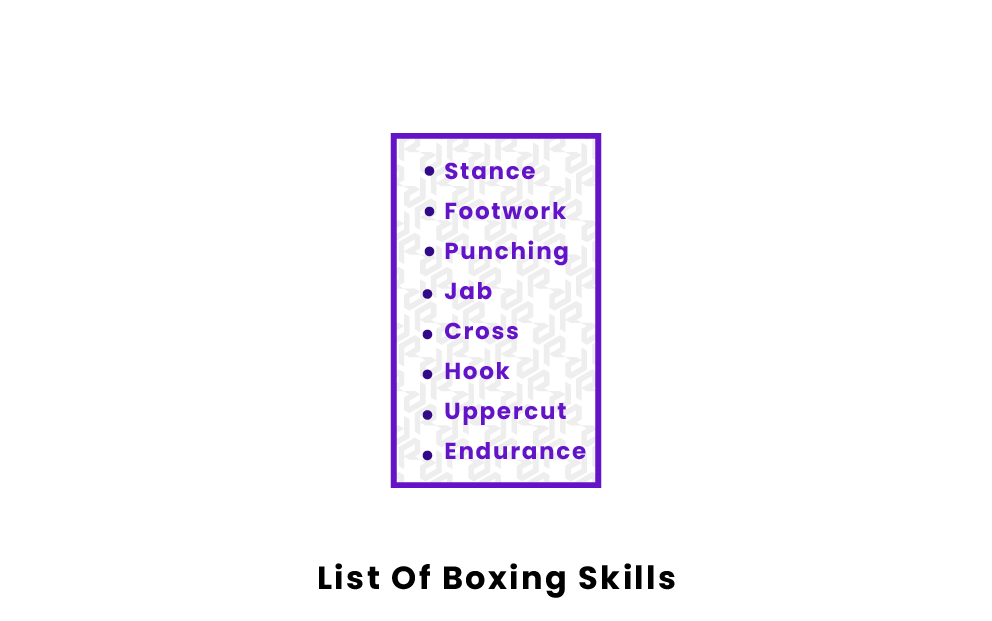 Boxing is one of the world’s oldest and most popular sports. Since its emergence in ancient Greece, boxing has become a global phenomenon. The sport is simple in concept but requires a lot of talent to be successful. Great boxers must possess strength, speed, endurance, and balance. Listed below are a set of skills every boxer needs to master.

Below is a list of the most important skills needed in boxing:

Having a proper stance is key to being a great boxer. A good stance provides balance, which is important in being able to throw quality punches and defend against opponents. In order to assume a good stance, boxers stand sideways to their target so that they lead with the shoulder opposite of their strongest punching hand. Most boxers keep their feet shoulder-width apart and positioned at a 45° angle toward their target.

The speed of a boxer depends on their footwork. Boxers have to stay light on their feet and tend to touch the ground with the balls of their feet rather than their heels to move around more efficiently. Just like having a proper stance, good footwork is critical in enabling boxers to defend or attack from a balanced position. In order to develop good footwork, boxers spend a lot of time jogging, skipping, and jump roping to increase the strength and speed of their legs.,

Boxing is all about throwing punches. There are four basic punches that every boxer must know how to perform: the jab, cross, hook, and uppercut. Each type of punch has its own unique form and situations in which it is best used.

Jabs are the simplest and most frequently used punch in boxing. Jabs are easy, quick punches with your front hand that are useful for a variety of boxing strategies. Jabs are used for both attacking and defending and can be useful to fend off opponents while setting up bigger punches.

The cross is the most powerful and damaging punch in boxing, but it is also the riskiest because it can expose the boxer to a counterattack from their opponent. Also known as a “straight right” or “straight left,” depending on which hand is used, this attack is best used in a combination of punches, usually after the opponent has been weakened by a solid jab.

The goal of the hook punch is to catch opponents unaware by coming from the side, out of their line of vision. Since the hook requires the boxer to arch their body, flexibility is key to successfully delivering this type of punch. The hook can be delivered with either the right or left hand and is often specified as a left hook or a right hook.

Also known as the knockout punch, the uppercut is delivered from underneath and is usually aimed at the jaw. Good uppercut punches are delivered at close range and have an element of surprise. Uppercuts have to be delivered with great power because if they do not knock the opponent out, there is a good chance they will be able to counterattack.

Endurance and the ability to outlast your opponent are hugely important in boxing. It is a highly physical sport, and boxers take a beating every time they compete. While having stamina is important for any sport, it is particularly crucial to boxing. Without proper endurance and durability, it will be hard to complete a boxing match, let alone win one.

What are the most important skills in boxing?

The most important skills in boxing are stance, footwork, and punching. These are considered to be the three most fundamental skills, as they are the base that can be built off of. Footwork and stance are important in putting yourself in an advantageous position, while punching is how you score points against your opponent.

What are the most important attributes of a good boxer?