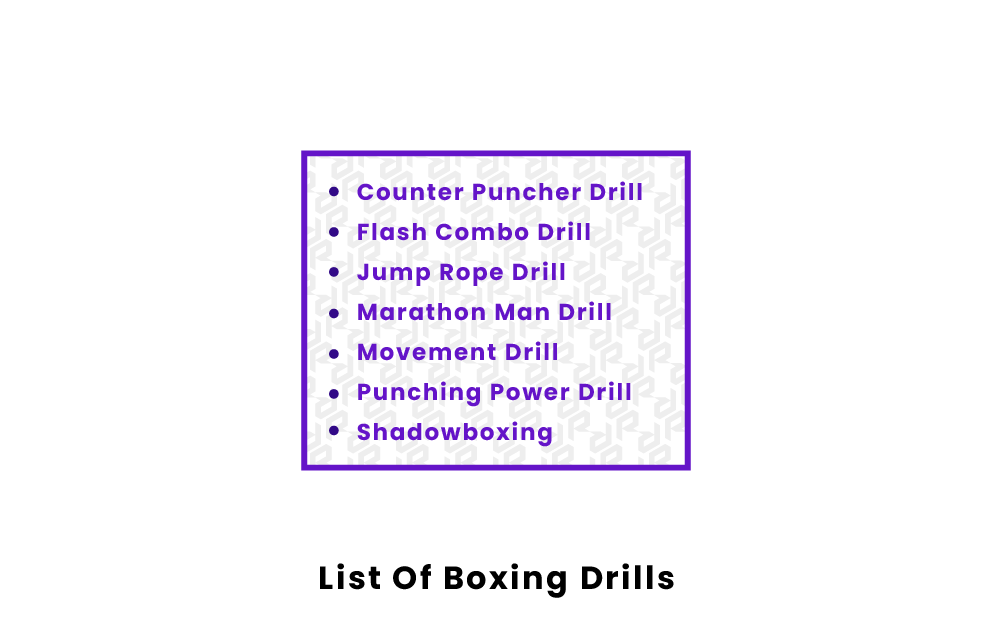 Boxing is dominated by fighters that focus on having the sharpest technique. Some of the best boxers worldwide such as Mohammed Ali and Floyd Mayweather are known to put their aggression aside and rely on their technical boxing skills instead. These top fighters rely on drills to get their technique to the level it needs to be. Boxing world championships may not be in everyone’s future, but some of boxing’s best drills can benefit anyone that dedicates their time to them!

Jumping rope may seem like an activity you’d find on a playground, but there are actually huge benefits for boxers that come with it. The highest level boxers in the world almost all use the jump rope in their daily training. Jumping rope increases stamina and muscle endurance while also sharpening the boxer’s footwork. Setting a timer for 5 minutes and attempting to stay in rhythm for the whole time is a great way to start this drill.

Shadowboxing is used by boxers to visualize themselves in different scenarios. During rounds of shadowboxing, the participant will string together combinations while only hitting at the air in front of them. During this drill, it is crucial that you use proper technique and incorporate movement and defense as well as the punches. Adding weights to your hands while shadowboxing is a great way to make this a more intense workout.

Now that you know basic combinations, it’s time to take them to a heavy bag. A heavy bag is usually a large, hanging cylindrical bag filled with different materials to weigh it down. Boxers use the heavy bag to drill different combinations of punches. Punching a relatively sturdy object like the bag is also very beneficial for strengthening the boxer’s hands, wrists, and forearms. Boxers want to have these body parts well conditioned in order to prevent injury. Boxers will usually set a timer that matches the length of time they will be fighting and then practice all of their different combinations during the time.

A speed bag is a small air-filled bag that is usually hanging slightly above eye level. This bag is hanging from a flat platform that will rebound the bag back towards the direction it was hit from. Using one or both hands, the boxer will hit the small bag at a consistent rhythm slowly building speed as they go. Boxers use speed bags to develop their hand-eye coordination along with hand speed in general.

Sparring is used to drill all of your different skills at once by putting you against a training partner. Unlike a real fight, a sparring session should not be done at full intensity, but there should be enough effort put into it that both boxers feel the pressure of a real fight and use their technical skills to get through. Sparring sessions can focus on drilling different things. You can specify if a round should be more based on defense, movement, striking, or anything else.

Throwing random punches may turn out to be a good workout, but for proper technique to develop it is important to work on functional combinations. A combination is a planned chain of punches thrown one right after the other.

The first important combination to know is called a “1, 2, 3, 4.” This combo starts with a boxer punching straight out with his lead hand. This is also called a jab. As the jab goes back to protect the boxer’s face, they throw their rear hand straight forward which is known as a cross. As the cross goes back it is followed up by the boxer rotating their upper body with their lead hand out at a sturdy angle. This is called a hook. Finally, this combination ends with the rear hand punching from an upward angle, which is called an uppercut.

Another combination that focuses on variety starts with a jab that is followed by a rear uppercut, then a lead hook, then finally a cross to finish it. Variety is important in combinations because you don’t want your opponent to catch on to what you are doing.

The next combination is an example of changing levels. In boxing, level changes are when the boxer switches from hitting the head and the body. This is an important offensive tactic because it is much harder to block. This combination will start with a jab to the head, then go into a cross to the body, and then finishes with a lead hook back up to the head.

This combination focuses on the importance of movement while boxing. If you can successfully move while punching, it makes it much harder for your opponent to track you. This combination starts with a lead hook to the opponent’s head while you are stepping backward. It is immediately followed by a cross to the head once you regain your footing.

Defense is as important as any other part of boxing. This is how competitors win fights, and boxing enthusiasts can continue training without injury. There are different aspects to boxing defense that eventually need to all be combined and used as one by professional level fighters.

Before any other part of boxing defense is worked on, a boxer has to continuously drill their ability to manage distance. Managing distance boils down to knowing your position and range and being aware of what your opponent’s position and range could be in any situation. One of boxing’s most important philosophies is, “Hit and don’t get hit.” Managing distance can help accomplish both of these.

In boxing, head movement is simply moving your head out of the way of a punch that is thrown at you. This is, however, harder than it may sound, and there is a lot of technique that goes into it. Some boxers will use their head movement to lean back away from a punch, but this risks getting hit with a follow-up shot if their opponent is using combinations. A more efficient way to use head movement is to drill “slipping” punches. Slipping punches relies on one’s ability to see the punch coming and then move to one side of it, or duck under it. A common drill used to sharpen this skill is hanging a string from one end of a room to another and then following the string, slipping under it as you go forward.

Sometimes, your opponent will be too fast or throw punches with extra long combinations, making head movement much harder to use. In times like these, it is key to know how to block your opponents’ shots with your own gloves and arms. Blocking generally consists of seeing where the punch is going to land and then moving your gloves in front of the spot to absorb the impact. The zones you will usually need to block are your face, the sides of your head, and your body/ribs. You can drill blocking by simply practicing the simple movements, or by putting your reflexes to the test against a training partner.

Parrying is the most complicated type of defense in boxing. In order to parry, the boxer must see the incoming punch, use their own hand to catch it and redirect it, and then step to a spot that they know to be safe. Parries require a lot of skill, but they are also the most beneficial type of defense because it allows you to choose the position you move to while also putting your opponent off balance. You can drill parries by having a training partner throw lower-powered shots at your face and then practicing parries from those.