How Much Does A Boxer Make? 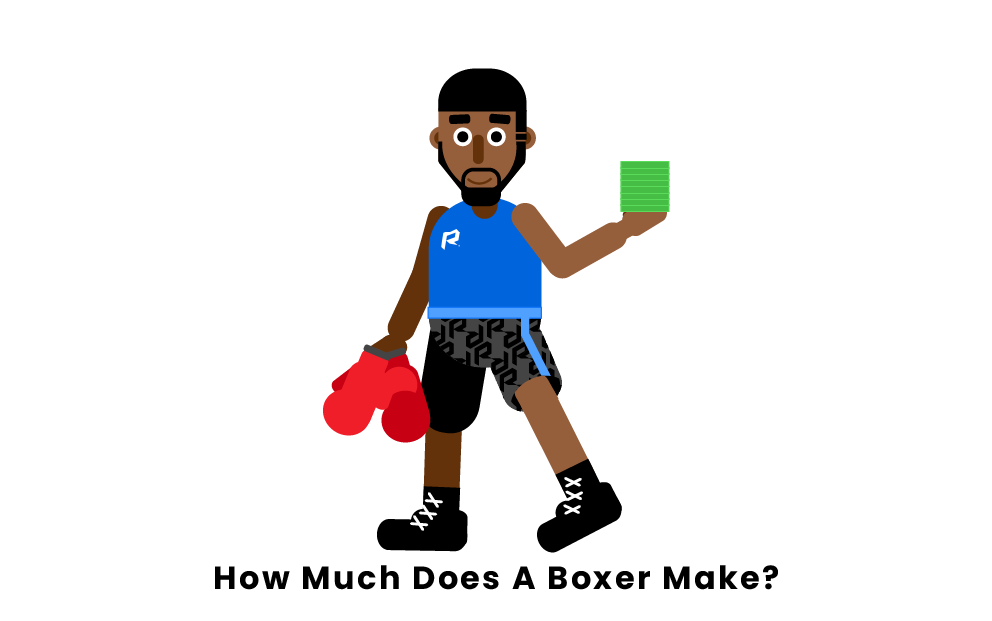 Boxing is the definition of a contact sport. Athletes put their bodies on the line while trying to survive attacks from the world’s most talented fighters. A great boxer combines lightning-fast reflexes with knockout power, all while maintaining elite physical conditioning. It’s certainly not an easy career, and that’s why many top boxers make more money than other professional athletes. Keep reading to learn how much professional boxers make.

How Much Does a Boxer Make?

The average salary for a professional boxer is $35,000. This may not seem like a lot, but this number does not encapsulate the highs and lows of professional boxing. For boxers just starting out and fighting in the lower levels, the pay can be as low as $1,000 per bout, but that number can increase drastically as boxers work their way up through the ranks. Boxers do not actually have a salary per se but are paid on a fight-by-fight basis. The more popular and successful a boxer is, the more they can get paid per fight. Unlike leagues such as the NBA and the NFL, professional boxers are not unionized and must negotiate for themselves when it comes to each event. If the boxer fights in a more well-known division or if the boxer has a large following, they can negotiate for more money.

While the median pay for boxers is relatively low compared to other sports, the upper echelons of fighting see payouts that blow away any contract given out in other leagues. Top boxers can take home millions of dollars per fight, and many only compete in a few matches per year because of these large purses. Floyd Mayweather Jr., one of the best boxers in the sport’s history, has made over a billion dollars during the course of his career from fights, earning him the nickname “Money Mayweather.” Championship fights usually bring in the most money, with each boxer being guaranteed a sum before the fight even begins. The winner then can take home an additional prize, but even the losers in these fights walk away with more money than most could dream of.

Though the payouts can be extraordinarily high in boxing, they don’t come without their costs. During the early stages of a boxer’s career, they usually operate as independent contractors, meaning they have to pay for everything themselves. This includes travel, lodging, training, and management fees. Even as boxers begin to make more money, the sport does not offer the same benefits as other professional leagues. There are no pensions or retirement plans, as boxers are left to their own once they retire. Due to the violent nature of the sport, many boxers suffer numerous injuries throughout their careers and can have lasting damage and chronic pain, and those who do not make it big can struggle with money after their careers are over.

Who is the highest paid boxer ever?

The highest-paid boxer ever is Floyd Mayweather Jr. Mayweather’s nickname is “Money” for good reason. During the course of his career, he took home over $1 billion in earnings, far and away the most ever by a boxer. Some of Mayweather’s highest-profile fights came against the likes of Manny Pacquiao and Conor McGregor, where he earned over $300 million for each fight. Though most boxers do not reach primetime, Mayweather is the poster child for the fame and fortune that professional boxing can bring.

Do boxers get paid annually or per fight?

Boxers get paid per fight and therefore don’t have a true “salary”. There is no union in professional boxing, so athletes work as independent contractors who negotiate for themselves, typically through agents or other representation. Boxers will negotiate a prize for each fight they appear in, and newer boxers usually only earn about $1,000 per match. However, as boxers become more successful and reach the higher levels of the sport, they can begin to negotiate prices in the millions, and primetime fights usually feature guaranteed money for both the winner and loser.

Which boxing match had the biggest purse?

The boxing match that had the biggest purse in history was the 2015 bout between Floyd Mayweather Jr. and Manny Pacquiao. The two are the most prolific boxers in the modern era, and this was the first highly-anticipated match between them. The fight made over $300 million from pay-per-view alone, and both boxers were compensated handsomely. Mayweather took home the win and $240 million, while Pacquiao took home $130 million.

Pages Related to How Much Does A Boxer Make?