How Much Do Boxing Tickets Cost? 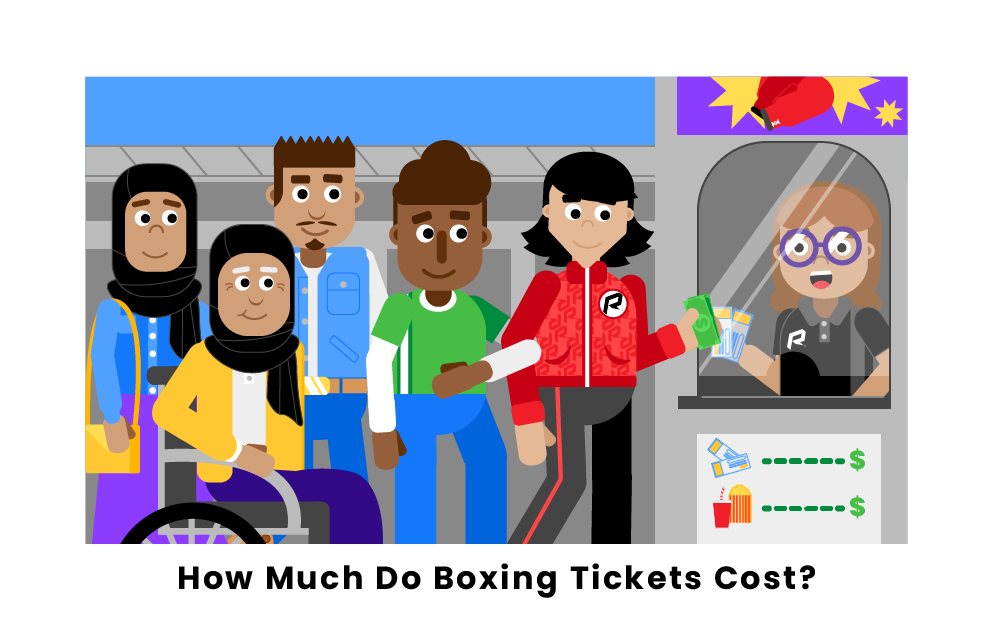 Boxing is a sport with a long history and a huge fanbase, but how much does it cost to attend a boxing match? Ticket prices for boxing have long been some of the most prized in the sporting world, and oftentimes, they can reach insane costs depending upon who the fighters are and what history they have between them. Here is a comprehensive breakdown of the cost of boxing tickets, including some of the most expensive tickets in the history of the sport.

On average, boxing tickets are fairly reasonably priced compared to the cost of tickets for other modern professional sports. Most boxing matches and events are between up-and-coming fighters or average fighters with solid records, and these events will cost a relatively standard amount to attend. In general, boxing tickets can sell for around $130 on average. Some tickets may cost less than this figure, while others cost more, ranging from as low as $80 to as high as $360, depending on the event and the fighters being showcased. Some boxing events may even sell tickets at prices as high as $900 to $1,000, especially if major titles or championships are involved.

Another popular method of paying to watch a boxing match is through Pay-Per-View (PPV) Television, where viewers pay an upfront cost ahead of time in order to get access to a boxing event on television. An average PPV pass for a boxing event (which can be purchased through the network or channel airing the fight) generally ranges from $65 to $75 but can go as high as $90 or $100 depending upon the fight, if not higher.

In addition to the varying costs based upon the quality of the event and the fighters themselves, boxing tickets can also vary in price depending on the seating area, as is the case with many other professional sports tickets. Boxing arenas such as the famous MGM Grand Garden Arena in Las Vegas, Nevada, and Madison Square Garden in New York City typically seat between 16,000 and 20,000 fans, and the closer these seats are to the boxing ring, the more expensive the tickets will be. Generally, the cheapest boxing tickets at any event will be those in the upper parts of the arena, where views are not as good due to distance, and crowds may be closer together. Seats closer to the ring are more expensive, and ringside seats, which are the closest to the action, are the most exclusive of all and can often sell for thousands of dollars at even minor events.

While the price for tickets to an average boxing event may not break the bank, tickets to attend a major fight between two famous boxers are often incredibly expensive. If a fight is being held for a major boxing title, such as the Heavyweight Championship Belt, ticket prices may range from $1,500 on the low end to as high as $7,500 or more, even for lesser seats. Ringside seats at these events are often astronomically expensive, with some selling in the tens of thousands of dollars. Many of these tickets are often sold on the resale market, and some tickets for major fights have been resold at costs in excess of $100,000.

Most Expensive Boxing Tickets of All Time

Among the long history of expensive boxing tickets, many major fights have drawn in large amounts of cash through ticket sales. In recent years, two boxing matches have achieved history for the record selling price of their tickets: Floyd Mayweather vs. Manny Pacquiao and Floyd Mayweather vs. Conor McGregor.

In 2015, Floyd Mayweather and Manny Pacquiao were scheduled to fight on May 2nd at the MGM Grand Garden Arena, drawing millions of eyes from around the world. Within ten minutes of the tickets going on sale, the event was sold out, as only 1,000 tickets were available to the public. The cheapest ticket for the Mayweather-Pacquiao brawl sold for $5,270, while the most expensive sold for a whopping $141,000, over ten times the cost for a Super Bowl ticket that year. The average cost for tickets to the fight was $11,000.

In 2017, Floyd Mayweather fought in another famous match against Irish MMA fighter Conor McGregor, who was not a boxer by trade. The fight drew major attention, sending ticket prices soaring. On average, the basic cost for a ticket to the Mayweather-McGregor fight was $2,000, but the most expensive ticket to the event sold for $110,763.22.

Boxing tickets are highly-prized in the sporting world. While tickets to average events are not outrageously expensive, fans who wish to see a notable fight between two big names will have to shell out a good amount in order to see the action in person. Without a doubt, though, some fans consider the astronomical prices for good seats in the boxing ring to be more than worthwhile due to the once-in-a-lifetime excitement of seeing two greats duke it out in the ring.

Pages Related to How Much Do Boxing Tickets Cost?