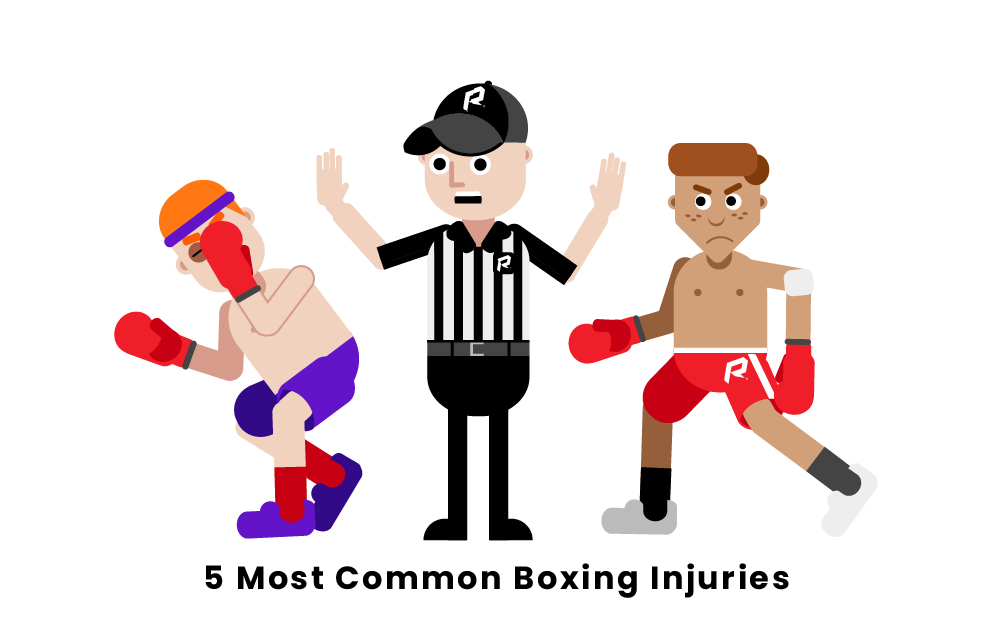 What are the most common boxing injuries?

This entry on the list comes as no surprise. Among the most common of boxing injuries, cuts and bruises happen to pretty much every boxer that steps in the ring to fight. Bruises can appear anywhere a boxer is hit. There are a few common ways cuts and lacerations happen: when a boxer is hit with such force that their skin crumples too quickly and tears, getting hit by a glove from a non-direct angle, or from some irregularity on the glove itself. Cuts are less common in amatuer boxing because of the use of headgear, but they do still occur regularly. Once cleaned and covered, these injuries can only be healed by time.

Boxer’s Fracture is a term used for when the small bones under one’s ring and pinky finger break. This can happen from incorrect punching technique or from punching a solid or immovable object with great force. The more durable bones of the other fingers typically survive the shock, but the smaller bones cannot take the same force. The injury is immediately followed by sharp pain, swelling, and the inability to properly move one’s fingers. Soon, bruising will set in as well. If lucky, the boxer’s bones will stay aligned, and their chance at a full recovery is high; however, surgery may be required if the bones become misaligned during fracture. It is estimated that 20% of boxers’ will experience this injury over their careers.

Carpal Bossing is a relatively non-serious injury that affects boxers. Carpal Bossing occurs when the bones in the back of one’s hand overgrow, causing annoying and painful masses to form. It is most often caused from trauma to the back of the wrist. While common, this injury can be prevented with proper technique, gloves, and the use of hand wraps. Typically, the injury is not very serious, and can be curtailed with the use of wrist guards after-hours and anti-inflammatory medication, but more serious cases may require surgery. The most unusual thing about this injury is that it has an age group that it prefers to target, showing up mostly within the age range of people twenty to forty years old.

Shoulder dislocation is an injury that can come out of nowhere in an instant. Usually occurring from taking a massive blow to the shoulder, shoulder dislocation is when one’s humerus bone is torn out and away from their shoulder socket. It tends to be extremely painful and causes immobility of the arm. A dislocated shoulder should be treated immediately by a trained professional. One should never attempt to pop their own shoulder back into place as they may do it improperly. Time is of the essence in this situation because the longer the shoulder is dislocated, the greater a chance there is of improper healing and further complications. Once popped back into place, the pain should lessen a great deal; however, it can take up to several weeks rest to fully recover.

Concussions are perhaps the most dangerous injury in all of professional sports, or at least among the top. Concussions are when the head takes a blow, causing the brain to knock around inside of the skull. In a sport like boxing, where blows to the head are common and encouraged, concussions are a big concern. When a person gets a concussion, they usually enter a confused, daze-like state; they may have headaches, nausea, and/or short-term memory loss. If a boxer is suspected to have a concussion, medical attention should be seeked immediately. In minor cases, competitors can usually heal in a matter of days while more serious cases may take weeks-to-months with doctor observation. The more concussions accrued over a career, the more serious each successive concussion becomes as they can cause permanent damage to the brain.