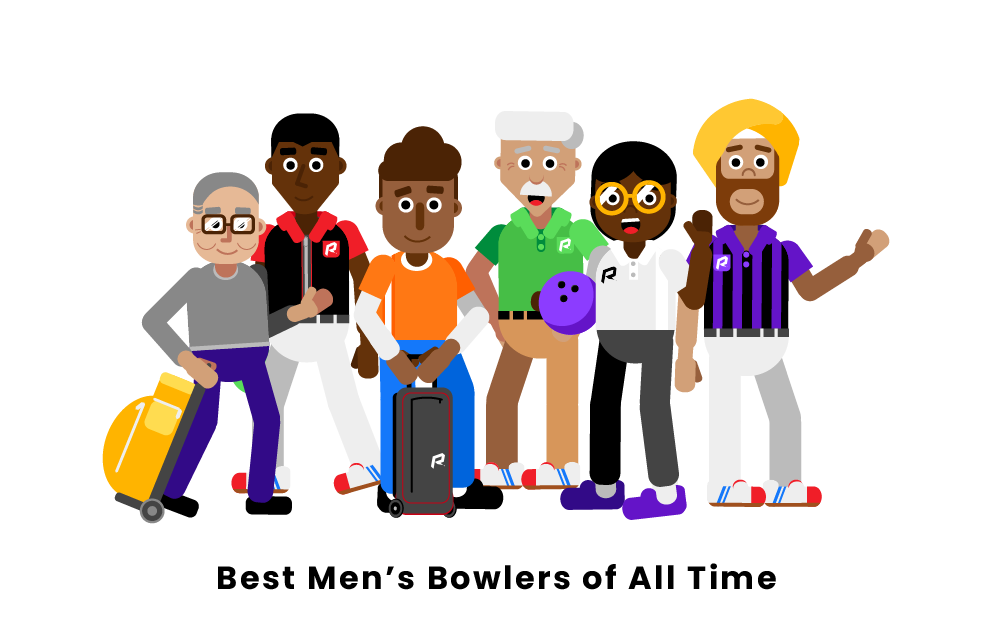 While bowling is a game enjoyed recreationally by many around the globe, it is a difficult sport that requires intense concentration, skill, and a high level of finesse to play professionally. Making it onto the Professional Bowlers Association (PBA) tour is a challenging process, but a select number of bowlers thrive on the tour and showcase why they are the best of the best.

Who are the best men’s bowlers of all time?

Pete Weber is considered to be the best men’s bowler of all time, known for his strong personality and rowdy celebrations. He was introduced to bowling at a young age by his father, Dick Weber, who was inducted into the PBA Hall of Fame. Weber entered the PBA in 1979 at the age of 17 and was awarded Rookie of the Year in 1980. Two years later, he won his first title and had won ten titles by the time he was 24 years old. In 1989, Weber completed his first Triple Crown through three title victories: the 1988 U.S. Open, the 1987 Tournament of Champions, and the 1989 PBA National Championship. He completed his second Triple Crown run in 2013.

Jason Belmonte is another of the best men’s bowlers of all time. Belmonte was introduced to bowling when he was a toddler, needing to use two hands to push the ball down the lane. He still uses this “shovel” technique today, earning him extensive media coverage. Belmonte started his career early, entering his first competition at only three years old and earning his first win at age four. At age 17, he became the first Junior Australian to bowl a score of 300 abroad and earned five gold medals at the 2000 Junior National Championships. Since then, Belmonte has continued to dominate, winning a total of 14 PBA major titles, six Player of the Year awards, four ESPYs, among other accolades throughout his career.

Earl Anthony is known for his contribution to making bowling a notable televised sport in America during the 1970s. Anthony did not begin to bowl until he was in his 20s, after an ankle injury prevented him from pursuing a professional baseball career. In 1963, he attempted to join the PBA Tour but quit after competing in seven tournaments without winning any prize money. After six years of practice in local tournaments, Anthony was ready for the PBA Tour and won his first PBA Tournament title in 1970. Following his first title, he continued his success, winning six PBA National Championships and two Firestone Tournament of Champions titles throughout his career.

Walter Ray Williams Jr. is known for his impressive prize earnings throughout his career, as he was the first bowler to surpass $4 million in winnings. Williams entered the PBA Tour in 1980 but did not win his first PBA Tournament title until 1986. This would be his first of many, as Williams won a total of 47 career PBA titles and holds the record for most titles of all time. His outstanding performances each year also earned him Player of the Year honors seven times. After winning his 47th PBA title in 2010, Williams began to bowl on the PBA50 Tour, designated for senior competitors.

Norm Duke joined the PBA Tour in 1982 and immediately saw success, winning his first tournament title less than a year after and becoming the youngest player to win a PBA Tour event at 18 years old. After his initial title, Duke hit a rough patch and did not win another title until 1991. Moving forward, he returned to his winning ways and had a particularly outstanding year in 1994, where he won five tournament titles and was awarded PBA Player of the Year honors. He was named Player of the Year for the second time in 2000 and was inducted into the PBA Hall of Fame in 2009.

Mark Roth was known for his forceful, crank-like style of bowling that is used by many bowlers today. Roth earned his first PBA title in 1975 at the King Louie Open and never looked back. From 1975 to 1979, he won 22 titles, including an impressive eight titles in 1978. He also was named PBA Player of the Year four different times in 1977, 1978, 1979, and 1984. Beginning in 1976, Roth averaged 215-plus points over a span of 8,000 games, which is the highest long-term pace in league history. After a very successful career, he was inducted into the PBA Hall of Fame in 1987.

Mike Aulby was an elite bowler in every way imaginable during his prestigious playing career. Most notably, Aulby secured 29 PBA titles and was the first bowler to ever complete the Super Slam. In order to complete the Super Slam, a bowler must win all five major bowling tournaments in their career. Outside of this remarkably wide range of success in major tournaments, Aulby was also a two-time PBA Player of the Year, is an inductee in the PBA Hall of Fame (Class of 1996), and is also a member of the USBC Hall of Fame.

One of professional bowling’s trailblazers, Don Carter began bowling as a boy while being employed as a pinsetter for his local alley, and even built his own bowling lane in his family’s basement. When he began bowling professionally in 1953, he exploded into quick success, becoming Bowler of the Year six times. He was also the first bowler ever to win the All-Star, the World’s Invitational, the PBA National Championship, and the Masters in a single year. Known for his unusual right-handed backswing, Carter was undoubtedly one of the pioneers of professional bowling, and though he does not have as many titles to his name, he is more than worthy of an honorable mention.

The father of legendary bowler Pete Weber, Dick Weber was a legend in his own right, and is widely-considered to be one of the first true “stars” of professional bowling, along with Don Carter. In a career that spanned 50 years, Weber dominated the airwaves throughout the 1960s, when bowling was a commonly-aired sport on national sports television. He was known for his amicable and professional demeanor on the lanes, but also for his impressive skill, which led him to 26 PBA Titles. Weber was also famed for his role as one of professional bowling’s most earnest ambassadors, and his legacy lives on through his son Pete’s extraordinary success.

Who is the greatest men’s bowler of all time?

Pete Weber is the greatest men’s bowler of all time. Throughout his career, Weber won an impressive 37 PBA Tour titles, 10 major championships, and even six titles while competing on the PBA50 Tour. Throughout his lengthy career of over 40 years, he successfully completed two Triple Crowns in 1989 and 2013. Weber retired in 2021 and will go down in history for his unmistakable personality and talent.

Who holds the record for the most men’s PBA major titles?

Who has bowled the most perfect games in bowling history?

Pages Related to Top 6 Best Men's Bowlers of All Time