The general strategy for bowling centers around trying to get spares, though a strike is the ultimate goal, of course. This is because the score of the shot after a spare counts for double. To get spares, players try to knock down as many pins as possible on their first shot. On the second shot, they strategically aim for the remaining pins. 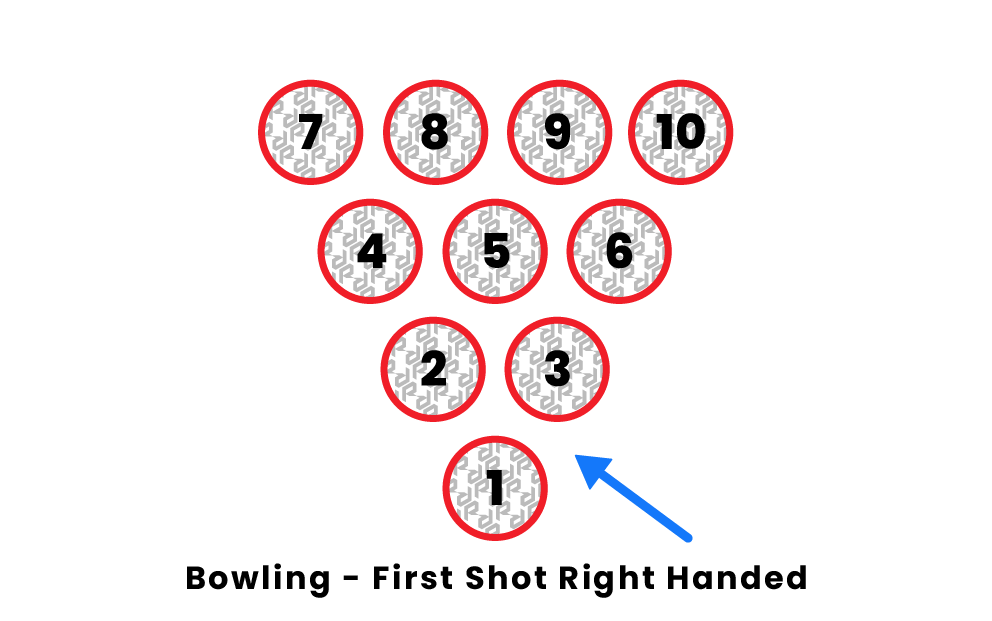 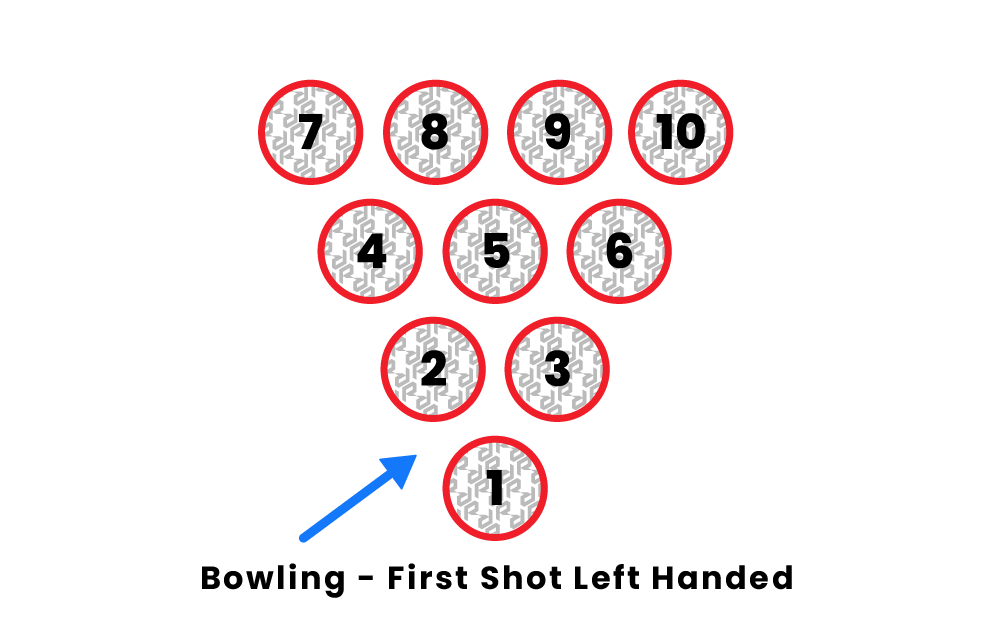 On the second shot, the strategy is dependent on which pins are left up. If there is not a split, the strategy is similar to the first shot. Players take a few steps to their dominant side and try to hit all the pins with the ball. An example of a second shot where there is not a split is if the two, four, five, seven, and eight pins are left remaining (shown below). The bowler would stand far to the right side of the lane and shoot from right to left, hitting the pins between the two and five pin. Note that the point of contact is similar to a right-handed player's first shot, which hits between the one and three pins.

When there is one pin remaining, players shift to wherever the pin is. They aim across the lane with their shot. For example, imagine only the 10th pin remains. The bowler would move all the way to the left side of the lane, and shoot from left to right.

Candlepin bowling, popular in the Northeast of the USA, uses smaller bowling balls. However, each bowler shoots three balls per frame rather than two. Because the balls are smaller, it takes more throws to knock down the ten pins. As a result, bowlers focus less on going for spares and instead try to knock down all ten pins in their three shots. The mechanical strategies stay the same.

In team bowling, players have to keep track of not only their scores, but the whole team's score. Knowing the score influences how conservative or aggressive a bowler is. For example, if a bowler knows they need two points to tie the game, they may take a riskier shot. This may mean going for both pins in a six-seven split, rather than just aiming for one, which may be easier. Going for both pins is risky, because the extreme precision required may result in missing both of them.

Accounting for the oil pattern, shape, and structure of the lane can lead to a much higher score when it comes to a bowling game. Adjusting where the ball is thrown or where your feet are positioned is an important part of reading the lane. Even adjusting the weight of the ball being used can have a major impact on your score!

The "breakpoint" is where the bowler needs to throw the ball in order to hook it perfectly into the head pin for a strike. Identifying this spot depends on the ability to read the lane, as wider lanes tend to have breakpoints closer to the center of the lane than thinner lanes.

In league games, oil is placed on the bowling lane. When the ball passes through the end of the oil, it will hook more extremely. Professional bowlers are able to observe the effects of the oil throughout the match and adjust accordingly.