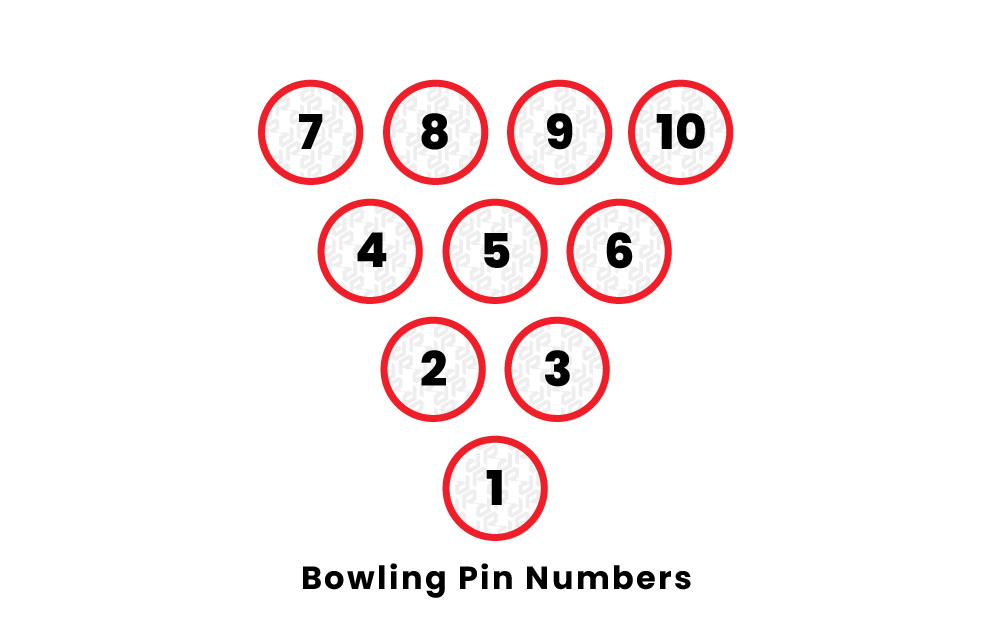 What is a split in bowling?

A split in bowling refers to the arrangement of pins left standing after some or all of the original ten pins have been knocked down by the bowler's first shot. Below is a diagram of the starting pin formation and the number that is assigned to each pin.

A split in bowling is a situation that occurs when a player throws a bowling ball and knocks down all of the pins, except for two or three pins which are left standing. These balls will be left adjacent from each other with a gap in between them. The most common split is a 7-10 split, which leaves only the back left and back right pin standing, but there are many different situations where a split can occur. A split is the hardest set up to knock because the pins are not close enough for a ball to hit both of them down in one roll.

How do you knock down a split?

The results of a bowler's first shot often dictate the bowler's strategy on the second shot. Ideally, a bowler would like to knock down all ten pins with the first shot, negating the need for a second shot. This is called a "strike" and results in ten points being added to total the number of pins knocked down during the bowler's next turn.

More often than not, a bowler will fail to achieve either a strike or a spare due to the remaining pins left in a split. In this case, the bowler will look to salvage as many points as possible, often aiming for adjacent pins in situations where there might be two or more pins next to each other while a single pin stands alone on the other side of the lane. The bowler is awarded a point for each pin that is successfully knocked down. For example, if the bowler manages to knock down eight of the original ten pins over the course of two shots, a score of eight will be recorded.

The "Baby Split" (2 and 7, 3 and 10 pins) and "Double Wood" (2 and 8, 3 and 9, 1 and 5 pins) are generally the most easiest splits to aim at, as the pins are aligned relatively close to another and thus provide the opportunity for the front pin to knock down the back pin as it falls. The "Tap" alignment is also a relatively simple shot, requiring the bowler to worry about aiming at only one pin.

The "Greek Church," (4, 6, 7, 9 and 10 pins remain) "Bed Post," (7 and 10 pins remain) and "Lily" (5, 7 and 10 pins) are widely considered to be the most difficult splits in bowling, as each alignment leaves a significant amount of space between the pins left standing and thus requires a masterful shot with lots of spin placed on the ball.

The 3-10 split is the most commonly bowled spare type. This occurs when the bowler knocks down every pin except for the number three pin, which is located on the right-hand side of the second row of pins (from the bowler), and the number 10 pin, which is on the far right of the last row of pins.

Because of the way the ball rotates, this is more common for right-handed bowlers.

In a 1-7 split there is the one pin and the seven pin remaining. In this example, a player would move to the far right, and throw the ball through the first pin, trying to hit both pins with the ball (shown below).

There are also more difficult possible splits. With these splits, the bowler must hit one pin into the other pin. For example, consider a six, seven split. The bowler must stand all the way to the right, and hit the right side of the six pin. Hopefully, they will hit the pin at the right angle to launch it towards the seven pin.

Impossible splits are splits in which the remaining pins are in a horizontal line. An example of this is if the seven and nine pins are remaining. While it is not impossible to hit all the remaining pins, there is no specific strategy for these splits because it takes a lucky bounce to hit the shot. An example of a lucky bounce would be if one of the pins ricocheted off of the back wall and hit the other pin. These types of bounces are extremely unlikely, thus leading to the name impossible splits. 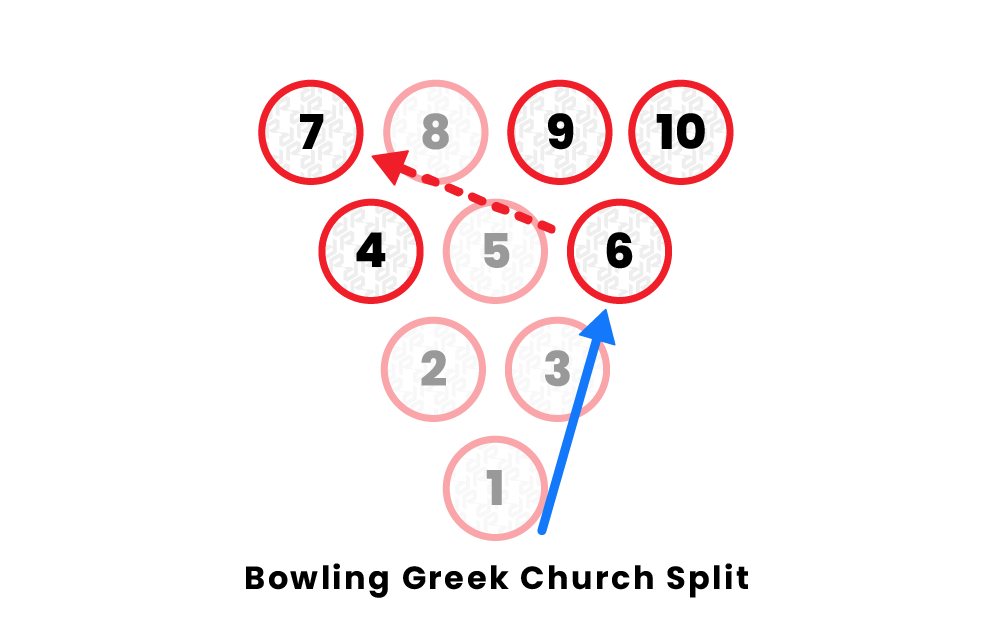 This type of split occurs when there are three pins on one side of the formation left standing and two pins on the opposite side left standing.

This is often referred to as one of the most difficult spares to achieve in bowling, with a .3% spare rate.