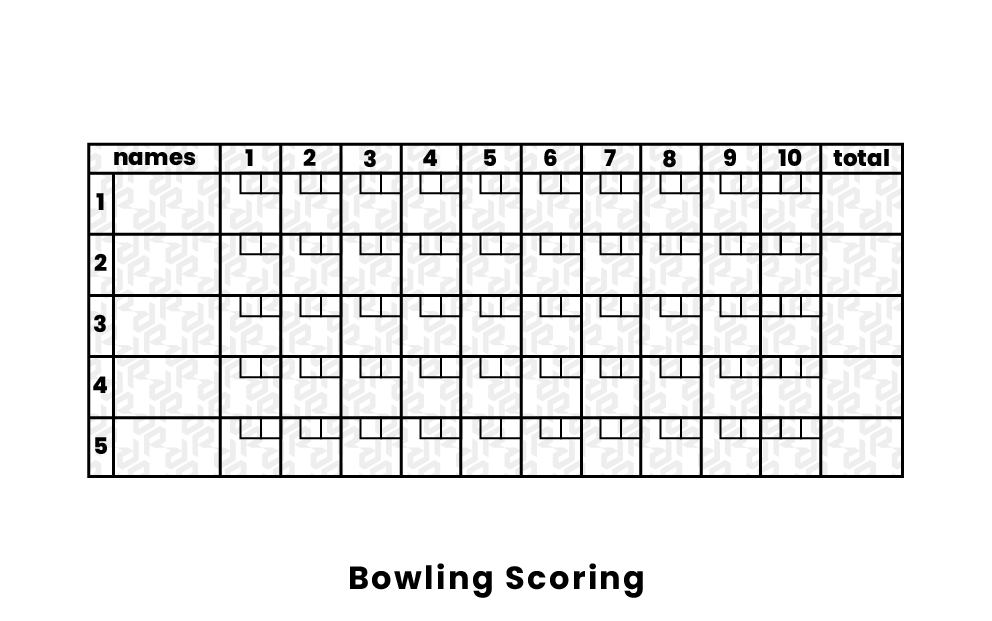 Scoring in bowling is calculated on a rolling basis and based on each frame’s outcome. In bowling, there are 10 frames. A frame is made up of two bowls, so the bowler gets to throw the ball down the lane at the pins twice per frame, unless they knock all 10 pins down on the first throw.

When you're bowling, you will see the following symbols appear on the screen that indicates the total running score on the current frame. 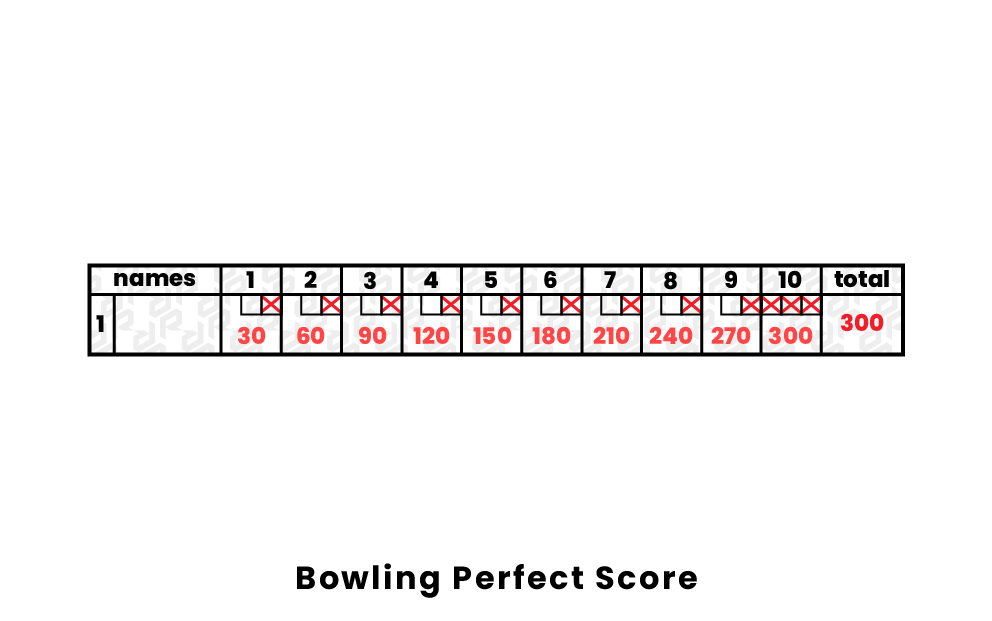 The minimum score for a single bowling game is 0, and the maximum score is 300. For each frame, a person gets two attempts to knock over all of the pins. A perfect score would be a strike for every frame.

An open frame is when the bowler fails to knock down all 10 pins with both bowls, making neither a strike nor a spare. An open frame is most common for amateur players and is scored by adding up the number of pins that were knocked over on both bowls.

Scoring for a match where just open frames are scored is pretty simple, but scoring gets a little more complicated when there are spares and strikes involved.

A spare, indicated by a slash “/” on a scorecard, happens when you knock down all 10 of the pins on your second attempt for the frame. When a spare is earned, it is used to calculate the score on the next frame. A spare will award you ten points plus a bonus of whatever you roll on your first shot of the next frame.

For example, suppose a player earns a spare by knocking down the remaining pins in a frame. The score will not be counted just yet. In the next frame, the player’s first roll knocks down six pins. Those six pins are added on to the ten earned from the spare, giving the bowler a score of 16 in the frame that they earned a spare.

A strike, indicated by an X on the scorecard, happens when you knock down all ten pins with your first roll of the frame. It is worth 10 points plus the number of pins on your next two shots. The maximum score you can receive for a strike is 30 points (10+10+10), and the minimum score you can receive from a strike is 10 (10+0+0). Your score will not be calculated directly after bowling a strike because you must wait for the score of the next two rolls.

Let’s walk through the above scoring example step by step:

Frame #2: The bowler knocks down 4 pins and then the remaining 6 pins for a spare. We wait to calculate the running score until the first roll of frame #3 is done. The bowler’s total score is 9.

Frame #4: The bowler knocks all 10 pins down for a strike. We wait to calculate the running total because the next two rolls are added to the score after a strike. The bowler’s total score is 33.

Frame #5: The bowler earns another strike. We still need to wait to calculate the running score for frame #4 and frame #5. The bowler’s total score is 33.

Frame #6: The bowler earns another strike. We can finally calculate frame #4 - we take 33 from frame #3 and add 10 for the first strike and 10 for the second strike, and finally 10 for the third strike for a total of 63. On a strike, we always add the next rolls. The bowler’s total score is 63.

Frame #8: The bowler rolls a 6 and then a 4 for a spare! We wait to calculate the running total until the next roll is done. The bowler’s total score is 114.

What is a perfect score in bowling?

It is possible to score a maximum of 300 points in a game of bowling. A score of 300 is known as a “perfect score” in bowling. A perfect score is achieved by bowling a strike on every turn.

How many points is a strike in bowling?

A strike in bowling is worth 10 points plus the number of pins knocked down for the next two rolls. For example, if a player bowls a strike in frame #1, followed by a 5 and a 3 for their next rolls, their frame #1 score will be 18. This is added to the 8 points scored in frame #2 for a total score of 26 at the end of frame #2.

How many points is a spare in bowling?

A spare in bowling is worth 10 points in addition to the number of pins knocked down on the bowler’s next roll. For example, if a bowler gets a spare in one frame and knocks down eight pins on the first roll of their next frame, they will have gotten 18 points recorded for the original frame.

How does scoring work in bowling?

Bowling is scored based on the number of pins a player knocks down during a frame. It is scored on a rolling basis, meaning the scores of each frame are added together to get the final score after ten frames. The three different results of a frame are strikes (all 10 pins knocked down on the first roll), spares (all 10 pins are knocked down after the second roll), and open frames (all 10 pins are not knocked down). A strike counts for 10 points plus bonus points equal to the amount of the next two throws a bowler makes. A spare is worth ten points plus bonus points equal to the next roll a bowler makes. An open frame is scored based on how many pins are knocked down during that specific frame.