How Do Bowling Tournaments Work? 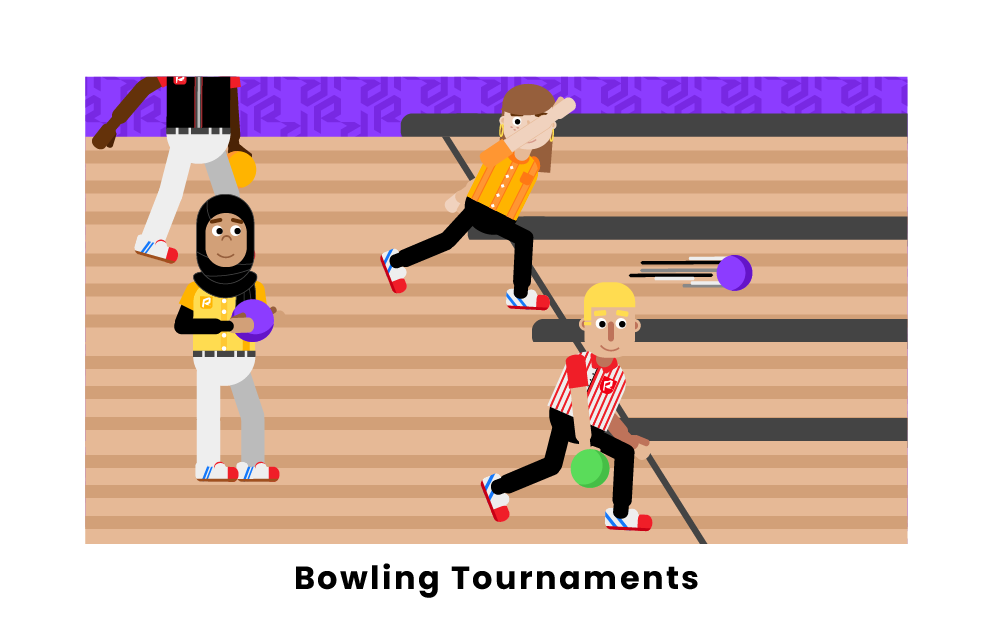 Bowling is a beloved sport that is inclusive for many and allows their competitive side to shine through. There are many levels of tournaments when it comes to the bowler's skill; the three main categories are the Amateur, College, and Professional groups. Each of these categories of tournaments has different requirements and rules.

A tournament is classified as a competition held outside of a league. Tournaments are played by multiple competitors and include one or more bowling matches played throughout a day or over a set period of days, according to the USBC Official Rulebook. The most common scoring method used in bowling tournaments is the total pin count, with the bowler that knocks down the highest total number of pins winning the tournament.

All officially recognized tournaments are sponsored and regulated by the USBC, which is the governing body for the entirety of the sport. They have specific guidelines for who may and may not participate in any recognized tournament; this means that all youth tournament players are not required to have a prior existing USBC Youth Membership or pay the tournament fees to participate. The tournament must consist of two or more teams, and if it is a singles tournament, there must be at least two or more individual entrants. Teams may consist of at most five members.

Youth participants cannot wear any kinds of apparel or use bowling equipment depicting alcohol, tobacco, or an illegal substance and perform or use any inappropriate language or gestures during competition. If these rules are broken, they are given a warning, and if they are broken again, the player is disqualified. The scoring is done using standard USBC rules, and each youth member may play no more than two matches. Youth tournaments typically are shorter, only a single or few days on average, and only consist of 4-5 games. The tournament winner may not win more than $500 in prize money.

The main differences in adult tournaments are the requirements for all bowlers to have an Active USBC membership, pay associate member fees, or pay a participation fee, according to rule 300c. All USBC rules are mandatorily followed regarding the rules and scoring and the two-match maximum per competitor. Each team participating can consist of no more than five total members. Prize money for these tournaments has no limit and depends on each tournament. Winnings for adult amateur tournaments can range anywhere from $1,000 to $25,000, depending on the size of the tournament.

When it comes to the Collegiate-style bowling tournament, there are two main tournaments, the ITC and the ISC. The first competition we will cover, the Intercollegiate Team Championships or ITC, brings together the top 16 men's and women's teams in the country to compete for a national title. To qualify to compete, the team must have won a conference or been one of the top-ranked teams in the country that year. The Intercollegiate Singles Championships or ICS includes the top 24 male and female collegiate bowlers competing for national singles titles and are only allowed to participate by advancing to the ISC through sectional qualifying matches.

The tournament’s style is also different in collegiate tournaments, with a three-day event. The three days consist of five Baker matches with five games in each game. Baker format games differ from a typical match in that each doubles team member bowls five frames, and the score is the total of their frames, rather than each member of the game bowling ten frames individually. This is then followed by a day of five classic matches and a final day of a best-of-seven Baker championship bracket, based on the previous two days' results for a chance at the national title. The winners of both the ISC and the ITC are both awarded National Titles as a prize for winning their respective tournaments.

Professional tournaments have their own set of rules as well. To even qualify to participate in a PBA tournament, the bowler must either be a PBA member or average at least 200 in a USBC sanctioned league or 190 in a sanctioned Sport or PBA Experience league. The format for professional tournaments has each bowler rolling eighteen qualifying games in three blocks of six games. The field is then roughly cut in half based on the top scores, and an additional eight qualifying games are played, culminating in the top twenty-four moving on for match play. Match play, where the bowlers play ten frames individually, and tie-breakers, which involve each player tied to have one throw each and the one who knocks down the higher number of pins awarded a win, follow the same format as a regular tournament. Prize money is awarded based on finishing place and can be as high as $250,000, which was the first place award for the 2021 PBA Players Championship Tournament.

Pages Related to How Do Bowling Tournaments Work?