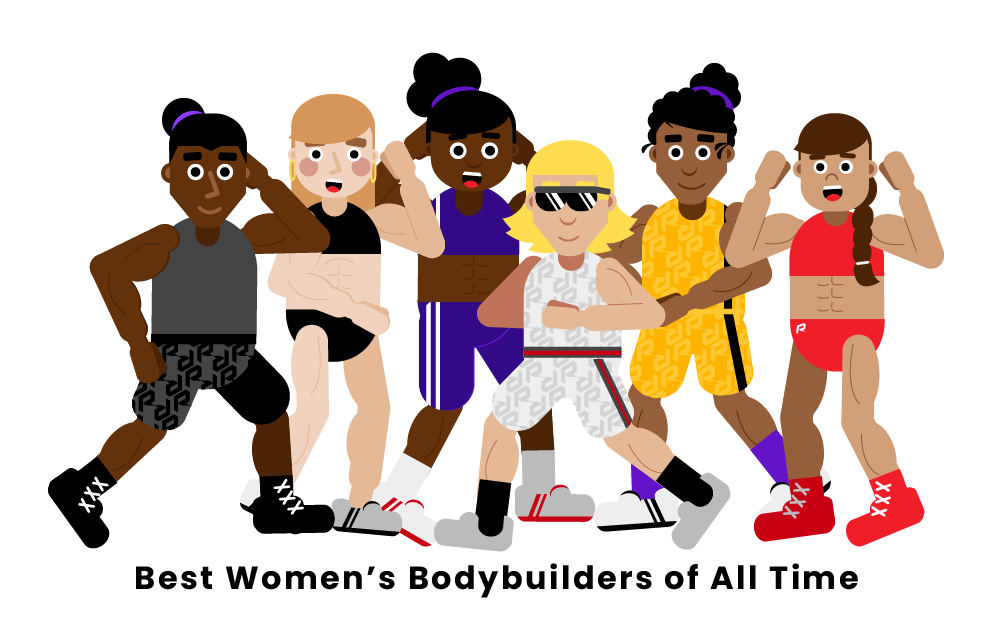 In the 1970s, women’s bodybuilding became popular alongside a new wave of feminism and the female powerlifting movement. Bodybuilding requires strength, discipline, and determination; these women have what it takes. Here are the six best women’s bodybuilders of all time.

Who are the best women’s bodybuilders of all time?

Iris Kyle was born in Benton Harbor, Michigan, in 1974 as the youngest of six children. She was always very involved in sports and received a scholarship to Alcorn State University. Kyle was inspired by Lenda Murray and entered the world of bodybuilding in her 20s. She won her first show at the NPC Long Beach Classic in 1994. Kyle began participating in more shows, despite facing a lot of racism and discrimination. Once her role model, Lenda Murray went on to be Kyle’s rival. Murray beat Kyle at Ms. Olympia competitions in 2002 and 2003 but lost in 2004.

Lenda Murray was born in 1962 in Detroit, Michigan. As a childhood cheerleader and track star, she became the second Black homecoming queen at Western Michigan University. After she was rejected from the Dallas Cowboys cheerleading squad, Murray hit the gym. Strength training quickly became a lifelong passion. She won 4th place at her first show, the 1985 Michigan State Championships. She made pro at the 1989 North American Championships, where she won first place. Lenda Murray has won the Ms. Olympia competition eight times, making her one of the greatest bodybuilders of all time.

Andrea Shaw was born in 1983 and raised in Detroit, Michigan. As a kid, she practiced gymnastics and cheer until her mom’s trainer encouraged Shaw to try bodybuilding. She had no interest in competing professionally and instead wanted to be a model. She started competing in 2008, then took a hiatus to go to Wayne State University, where she majored in sports and exercise science. After, she became a physique competitor and won 2nd place at the 2019 Nationals. She won the 2020 and 2021 Ms. Olympia competitions. Andrea is also a personal trainer and plans to earn her doctorate.

Yaxeni Milagros Oriquen-Garcia is a Venezuelan-American bodybuilder who was born in Cabimas, Venezuela in 1966. She is the youngest of nine children and began her career on stage in the world of modeling and theater. In 1989, she started bodybuilding. She started competing in 1993 and won four amateur contests. Then, she won the Ibero Central American Championships, which marked her entrance into professional bodybuilding. She moved to the United States shortly after. She won the Ms. Olympia competition in 2005, the only Venezuelan to ever do so. She holds five Ms. International titles from 2002, 2003, 2005, 2008, and 2012.

Born in Fort Knox, Kentucky, in 1979, Monique Jones started strength training with her father’s weights when she was just 13 years old. By the time she was 15, she was training seriously. At age 18, she started entering competitions. Jones couldn’t decide between figure and bodybuilding, so she entered both and won both titles. She decided to compete in figure for a few years, then switched to bodybuilding. She entered the IFBB North American Championships in 2010 and earned first place in heavyweight, officially becoming a pro. Jones is ranked 7th best bodybuilder in the IFBB Pro Women’s Bodybuilding Ranking as of 2022.

Melina was born in 1996 in Finland. As a kid, she loved gymnastics, dancing, skating, and cheerleading. She started training at the gym when she was 17. She started as an amateur bodybuilder in 2016, where she won the Spring Finnish Junior Championships. The following fall, she earned the Over title in the open category and also won the Ben Weider Legacy Cup. She competed in the inaugural IFBB Elite Pro in Finland. She holds the title for the first-ever IFBB Pro World Bikini Champion. Melina values her personal time and ensures to take proper rest between all of her competitions.

Who is the greatest female bodybuilder of all time?

With 17 titles, including ten Ms. Olympia titles, Iris Kyle is the greatest female bodybuilder of all time. She went pro at the age of 23 and has now earned seven Ms. International competitions. The IFBB Pro Women’s Bodybuilding League ranks Kyle at number one. Though Kyle’s role model and rival Lenda Murray beat her in the 2002 and 2003 Ms. Olympia, Kyle beat Murray in the overall and heavyweight categories at the 2004 competition.

Who holds the record for the heaviest deadlift by a female?

At the 2021 World Raw Powerlifting Federation’s Showdown in Kansas City, Tamara Walcott broke the record for heaviest deadlift by a woman. She lifted 636 pounds (288.5 kilograms) and beat the previous record-holder, Sara Schiff, by 3.3 pounds. Wolcott attributes her success to intensive back strength training. She has now participated in six competitions and only lost one.

Who holds the record for the most Ms. Olympia wins overall?

As the best woman bodybuilder of all time, Iris Kyle has the most Ms. Olympia wins overall, with an astounding record of ten titles. Ms. Olympia is the most respected competition for the International Federation of Bodybuilders (IFBB). Lenda Murray is the runner-up to the record, with eight Ms. Olympia titles. Lenda Murray beat Iris Kyle in 2002 and 2003, but lost to her in 2004.

Pages Related to Top 6 Best Women's Bodybuilders of All Time