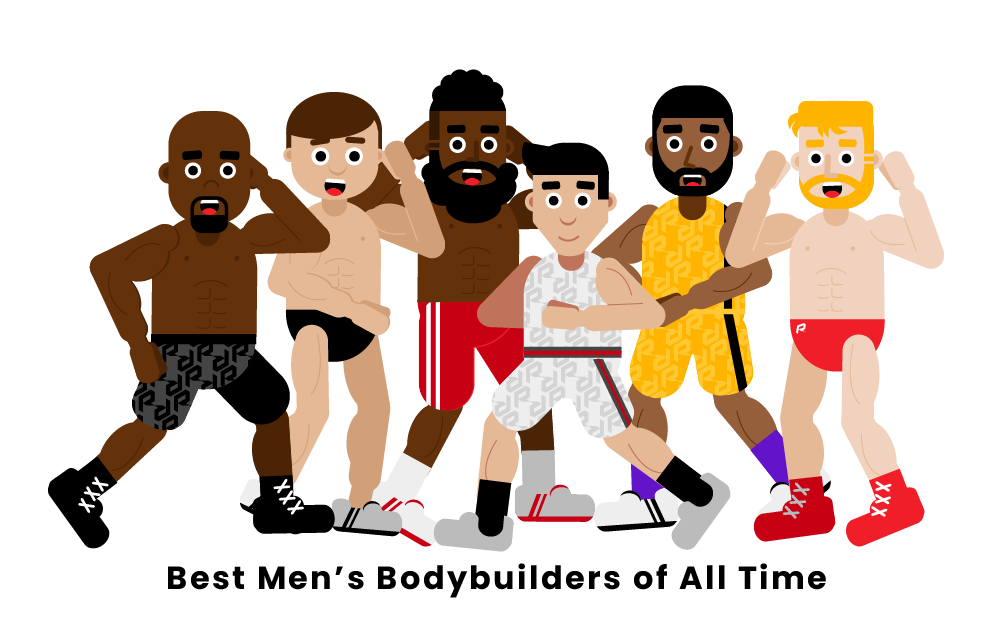 Bodybuilders are a special breed of athlete. It takes incredible dedication and years of hard work to compete professionally. There are a few bodybuilders who were so amazing, impressive, and gigantic that they changed the sport forever. Read on for a list of the best men’s bodybuilders ever to step on a stage.

Who are the best men’s bodybuilders of all time?

Many people know Arnold Schwarzenegger for his Hollywood acting career or his time as governor of California. However, Schwarzenegger started out as a bodybuilder and was one of the best in the sport. Born in Austria, a teenage Arnold was introduced to weight training by his football coach and inspired to build his physique by watching Steve Reeves films. He started competing in bodybuilding while in the army, winning Junior Mr. Europe at 18 and Mr. Europe at 19. The next year he took home the 1970 Mr. Olympia, the first of seven titles. After moving to America, Schwarzenegger trained with Joe Weider and Ric Drasin. Arnold remains active in the bodybuilding community, overseeing two fitness magazines as well as the Arnold Classic and the Arnold Sports Festival.

Ronnie Coleman is one of the most successful bodybuilders of all time and the face of the sport in the modern era. Coleman attended Grambling State, where he played football and excelled academically. He struggled professionally until local gym owner Brian Dobson offered to train him for the upcoming Mr. Texas competition. Coleman agreed to compete and won the overall and heavyweight titles. He quickly added other championships, winning the 1995 Canada Pro Cup and the 1997 Russian Grand Prix. After six years of trying, Coleman won Mr. Olympia, a title he successfully defended for eight consecutive years. This tied Lee Haney’s record for most Mr. Olympia titles.

One of the best and most dominant bodybuilders in history, Dorian Yates went undefeated in major contests during his brief five-year career. Born in England and in trouble as a teen, Yates started training in juvenile detention. He began competing, first winning regional amateur competitions, then the 1986 EFBB British, his first major title. Yates took a few years off to train, got his pro card, then won the 1992 Mr. Olympia. This sudden return earned him the nickname “The Shadow.” Yates won every competition he entered for the next five years, including five consecutive Mr. Olympia titles. Injuries forced Dorian to retire early, but he remains active in bodybuilding, running a training and supplement company as well as a chain of gyms.

Phil Heath is one of the most successful bodybuilders in recent history, as well as one of the greatest of all time. Heath grew up in Wisconsin and played varsity basketball. He attended the University of Denver, where he studied IT and business administration on an athletic scholarship, playing guard for their Division I basketball team. Heath started bodybuilding after graduation and three years later earned his pro card by taking home the 2005 NPC USA Championships overall title. He won the Iron Man show in 2008 and, after years of trying, Mr. Olympia in 2011. Heath went on to win seven consecutive Mr. Olympia titles, tied for the second-most of all time with Arnold Schwarzenegger. Phil Heath is still competing today.

Lee Haney is a legend from the golden era of bodybuilding. With eight Mr. Olympia titles, he holds a record that only Ronnie Coleman has tied. While growing up in South Carolina, Haney played football and developed a love of weightlifting, training at his local YMCA. Haney started bodybuilding, winning Teen Mr. America in 1979. Meanwhile, he attended Spartanburg Methodist College for youth counseling, playing on the football and basketball teams. Haney won his first Mr. Olympia title in 1984 and successfully defended it for the next seven years.

Frank Zane is one of the greatest bodybuilders of all time. He revolutionized bodybuilding in the late 1970s by shifting the sport’s focus away from bulk and mass and onto aesthetics and proportion. Zane grew up in Pennsylvania and was inspired to start bodybuilding as a teenager by reading Muscle Magazine. He went to Wilkes University for a Bachelor of Science, then taught high school math and science. He later earned additional degrees in psychology. Zane was known for his wide shoulders, thin waist, and overall symmetrical and proportional physique, which stood in contrast to the bulky bodies of prior champions. Zane won Mr. Olympia in 1977 and defended the title for two more years, making a lasting impact on bodybuilding.

Who is the greatest male bodybuilder of all time?

Arnold Schwarzenegger is the greatest male bodybuilder of all time. He fell in love with the sport at a young age and dominated the world of professional bodybuilding while he was competing, winning six consecutive Mr. Olympia titles. After five years away from the contest, he returned in 1980 to nab a seventh title, starring in the documentary “Pumping Iron” in the process. Schwarzenegger had one of the best physiques of all time and was one of the best competitors in the history of bodybuilding.

Who is tabbed “the king of bodybuilding?”

Which men’s bodybuilder holds the record for the largest chest?

Greg Kovacs holds the record for the largest chest. Kovacs was a Canadian bodybuilder who stood 6’4”, and his massive yet proportional chest measured an incredible 70 inches. One of the tallest and largest bodybuilders ever, his biceps measured 27 inches. Kovacs weighed an impressive 420 pounds in the offseason, cutting down to 330 pounds for competitions. He was also one of the strongest bodybuilders of all time, known to incline bench 675 pounds for several reps.

Pages Related to Top 6 Best Men's Bodybuilders of All Time