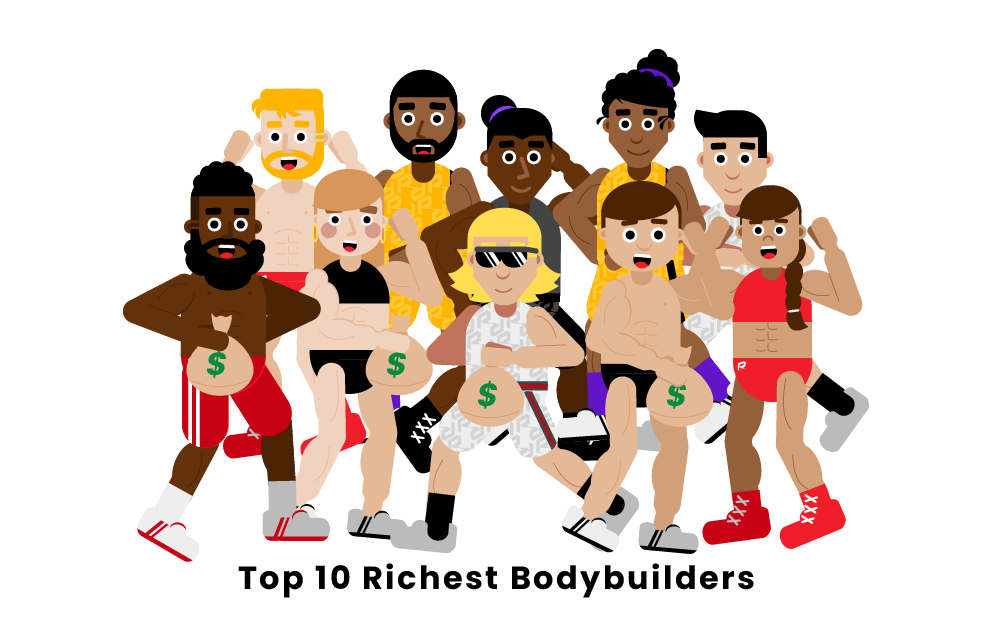 Who Are The All Time Richest Bodybuilders?

First on the list of richest bodybuilders is the infamous Arnold Schwarzenegger, with a net worth of $400 million. Arnold takes the top place with a net worth of more than double his runner-up’s net worth. Although he started bodybuilding at the young age of 15, Arnold earned his large net worth from various other professions throughout his life. Some of these include being an actor, politician, author, and business investor. What started this diverse career was when he won Mr. Universe when he was only 20 years old. This caused his career to take off and allowed his popularity as a public figure to grow immensely through many magazine features and producing his own workout videos.

Next on the list of the richest bodybuilders is Triple H, who has a net worth of around $150 million. Triple H’s real name is Paul Levesque, and aside from being one of the most well-known bodybuilders, he is also considered one of the greatest wrestlers of all time. Most of his wealth comes from the fact that he is so involved in WWE, as both the Chief Content Officer of the organization and a former wrestler himself. In total, proving his success as a bodybuilder and wrestler, Paul has won 23 professional wrestling championships, including 14 world championships.

Rich Gaspari has a net worth of approximately $90 million. Rich’s career was at its peak during the late 1980s and 90s, and many know him by the nicknames “The Dragon Slayer” and “The Itch.” Although he was a very successful bodybuilder during his career and was even inducted into the IFBB Hall of Fame in 2014, he has earned the majority of his net worth through the nutrition supplements company he started, “Gaspari Nutrition.”

Jay Cutler has a net worth of $30 million. Jay is from Massachusetts, and his career took off in the mid-2000s, when many considered him the best bodybuilder in the IFBB. Cutler is famously known for winning the Mr. Olympia contest, and what makes him stand out is that he didn’t just earn this title once, but four times in total throughout his career. In addition to his successful career as a bodybuilder, Jay has earned a lot of his wealth from the company he started called Cutler Nutrition.

Lou Ferrigno is a famous bodybuilder and actor who has a net worth of around $12 million. Lou earned three of the most prestigious competition titles during his bodybuilding career, including Mr. America once and Mr. Universe two times. Lou competed as one of the top IFBB competitors of all time. In addition to this professional bodybuilding career, he earned a living as a fitness trainer and actor. His popularity and earnings also came from the famous 1977 documentary in which he was featured called Pumping Iron, which was what kicked off his acting career.

Ronnie Coleman has a net worth of close to $10 million. Although he is now retired, Ronnie won the Mr. Olympia competition for eight consecutive years during the peak of his career, from 1998 to 2005. During the years in which he competed as a bodybuilder, Coleman also served as a police officer in Arlington, Texas. One of his fellow officers was the first person to convince Coleman to start working out at Metroflex Gym, and his workouts there led him to become part of the Mr. Texas competition. From there, the rest was history. Coleman’s eight Mr. Olympia wins are some of his many awards, including a total of 26 IFBB professional titles, and he is known as the strongest Mr. Olympia of all time. He has also made most of his fortune, like the ones before him, by starting his own nutrition company called Ronnie Coleman Nutrition.

With a net worth of $8 million, Phil Heath is one of the wealthiest bodybuilders still competing today. Phil is currently tied with Arnold in terms of winning the title of Mr. Olympia on seven different occasions throughout his career. He has famously held this title beginning in the year 2011, and this early success is why he has earned the nickname “Gift” throughout the bodybuilding and fitness community. In addition, Phil has earned a lot of his wealth through a variety of magazine features and movie or documentary appearances.

Gary Strydom has a net worth of around $8 million. Gary was born in Durban, South Africa, but he is considered one of the best American IFBB bodybuilders. Although he has retired, Gary is still one of the wealthiest bodybuilders. Gary has had one of the longest bodybuilding careers lasting over 20 years in the business. He was most popular in the 1980s and 90s, but his last competition was actually much later, in 2006.

Lee Haney is famously known for his successful bodybuilding career as a professional in the IFBB and has a net worth of $5.5 million. In addition, he is known for being tied for the most Mr. Olympia titles by an individual in history. Haney is tied for this record with Ronnie Coleman for winning Mr. Olympia in eight consecutive years from 1984 to 1991. Haney was inducted into the IFBB Hall of Fame in 2014. Under Bill Clinton, Haney served as chairman of the President's Council on Physical Fitness and Sports. Also known by his nickname, “Total-Lee Awesome,” Haney sells bodybuilding supplements under his Lee Haney Nutrition brand and  operates a coaching business which offers a transformation program called “I Train with Lee.”

Dorian Yates is a legendary British bodybuilder with an estimated net worth of $4 million. Although he is retired now, Yates was highly successful during his time as a professional bodybuilder. In fact, he holds the fourth-most Mr. Olympia titles with six. Outside of his dominant career as a bodybuilder, Yates has accrued a large personal wealth through business ventures. He is a published author with his autobiography Blood and Guts and his co-authored biography A Warrior’s Story. Additionally, he owns the Temple Gym franchise, DY Nutrition, and has participated in a variety of other business ventures since his retirement.

Dexter Jackson is an accomplished bodybuilder with a net worth of around $3 million. He is famous for competing in and winning more competitions than any other bodybuilder ever. Although he is now retired, he participated in more than 80 competitions professionally, which is an impressive number when looking at his other competitors. In addition to winning the title of Mr. Olympia and winning the Arnold Schwarzenegger Classic a record nine times, Dexter has also earned income by being featured in various magazines.

Mike Rashid is an accomplished investor, entrepreneur, and bodybuilder with a net worth of almost $4 million. He has amassed his fortune through several successful ventures, ranging from being a professional boxer to investing in cryptocurrencies and NFTs. He also has a popular YouTube channel where he shares videos of workouts, nutritional tips, and motivational advice.

Who makes the most money as a bodybuilder today?

On average how much do bodybuilders make?

The average amount that bodybuilders make annually is all dependent on their success in various competitions and overall popularity. That being said, the amount that winning bodybuilders make on average is between $50,000 to $80,000 each year. For the bodybuilders competing at the highest levels, their annual income is higher because they will add in better and more expensive endorsement deals and more public appearances.

How do bodybuilders make money?

Why is Arnold Schwarzenegger so much wealthier than any other bodybuilder?

Arnold Schwarzenegger is so much wealthier than the other richest bodybuilders of all time because of the wide variety of business ventures he has taken on. In addition to being a very successful bodybuilder, his acting career is what earned him a lot of his net worth. With a net worth of around $400 million, he is one of the most recognizable faces around the world. This is largely due to his acting roles in blockbuster hits like the Terminator franchise and Predator.