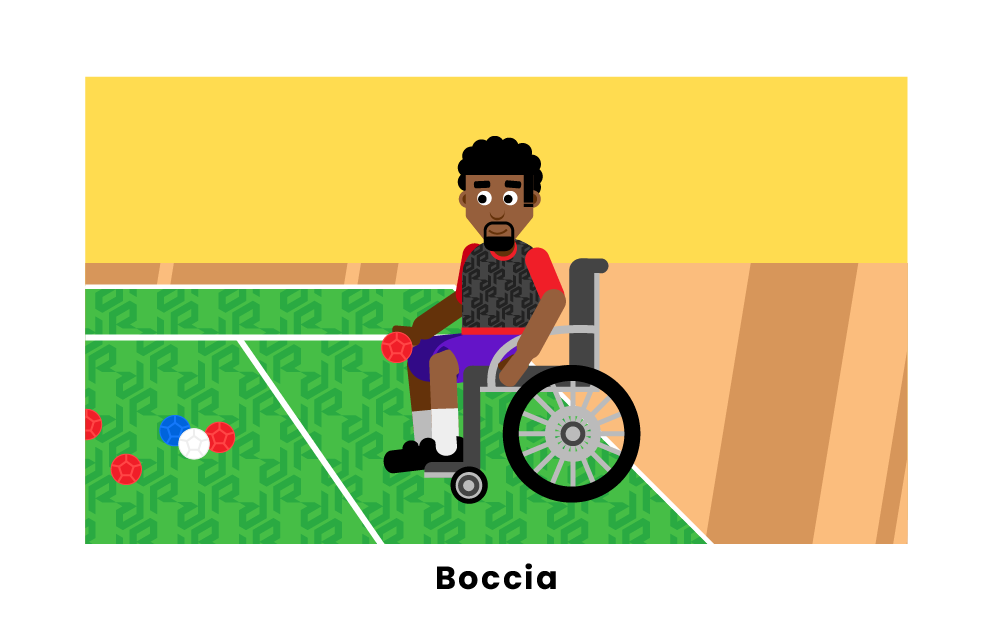 Boccia is a ball and target sport played by paralympic athletes. Players take turns throwing balls as close as possible to the white “jack” ball. Boccia closely resembles other sports in the boules family; such as bocce, bowls, and pétanque.

Boccia can be played by anyone, but official competitions are restricted to those with certain disabilities. Boccia competitors must have either cerebral palsy or another severe hindrance of their locomotor abilities. The only other Paralympic sport without an Olympic counterpart is goalball. 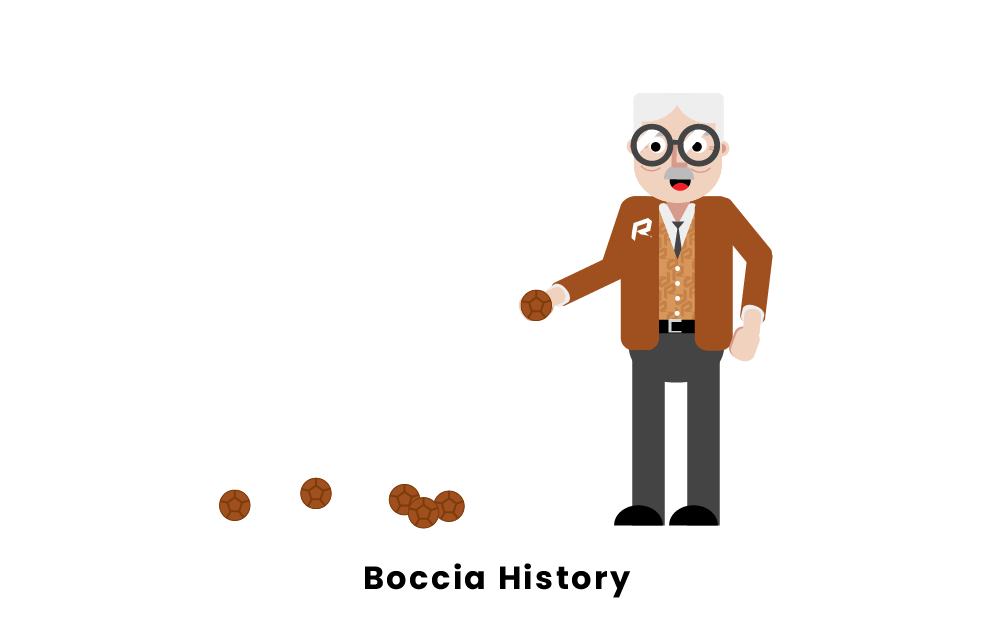 Boccia was originally developed as an alternative to bocce for those with cerebral palsy. Although played for many years, boccia first became an official Paralympic sport at the New York 1984 Paralympics.

Boccia was designed to be played by athletes with cerebral palsy, but today’s competitions include athletes with a wide range of locomotor disabilities. Unofficial boccia matches are sometimes played by able-bodied individuals as well.

In 2007, a classification system was introduced to distinguish players with different abilities. 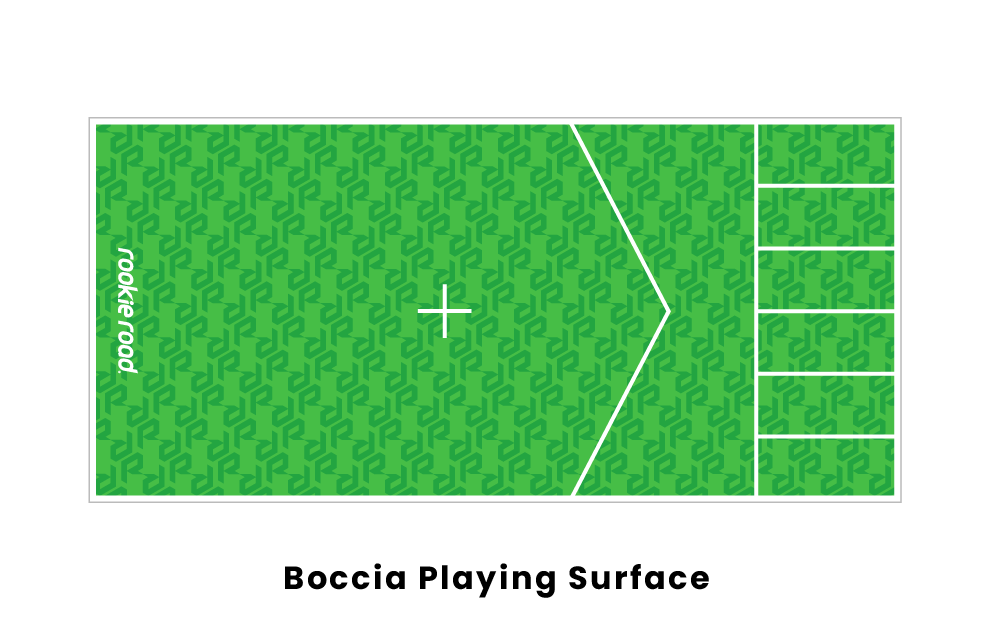 Typically an indoor sport, the boccia court must be 12.5 x 6 meters with 2 meters of empty space surrounding this area. The playing surface must be smooth and flat, although a specific surface is not required. The Bocce International Sports Federation (better known as “BISFed”) recommends that playing surfaces be made from concrete, wood, or rubber.

Regardless of its playing surface, a boccia court must be completely clear of all obstacles, including powders. 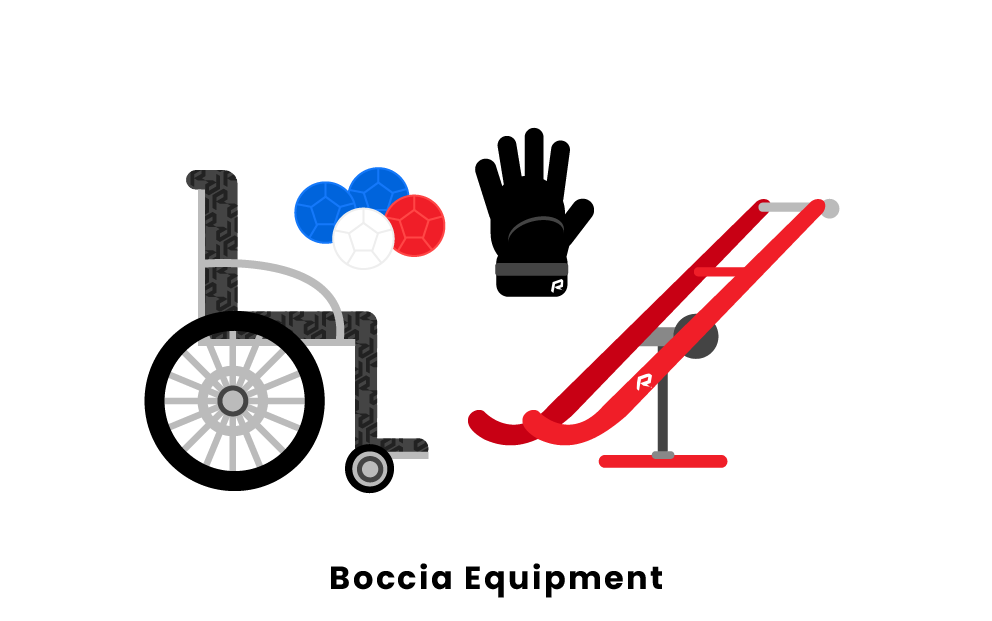 There is not a ton of equipment required to play boccia. All that is really needed for a recreational game is 13 balls (one jack and six balls per team) and a playing area that is big and flat enough.

In official matches, players may be required to wear a uniform. They may also use items such as ramps and splints to assist with their delivery. Important equipment includes: 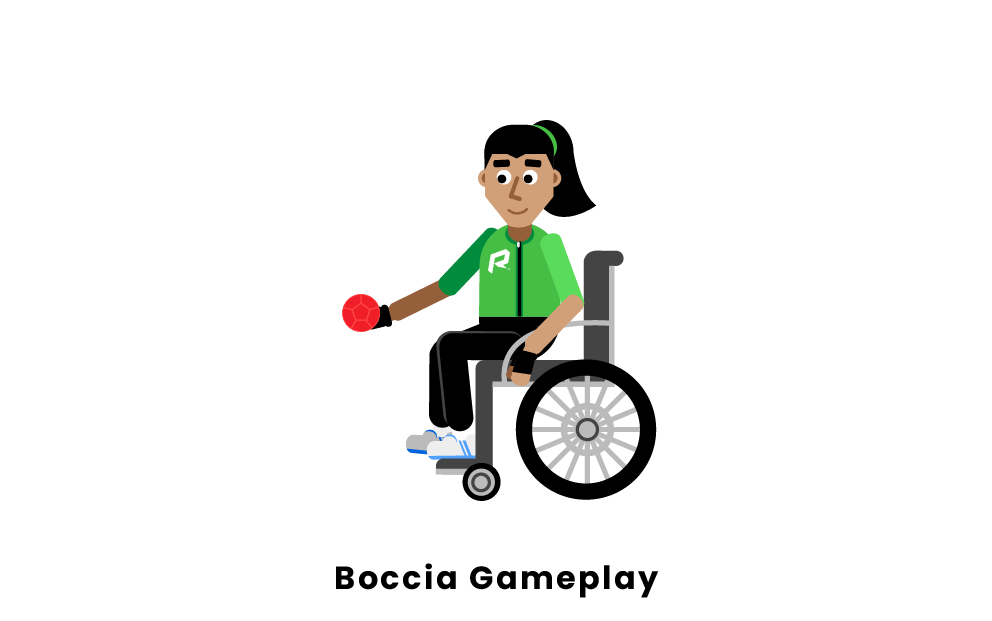 After the second colored ball is thrown, players will throw the rest of their balls. The team which does not have a ball closest to the jack throws until they do. This continues until one team is out of balls, and then the other team throws their remaining balls.

An end is finished once all the balls have been thrown. The official then measures balls from the jack. A point is awarded for every ball that is inside the opponent’s best ball. 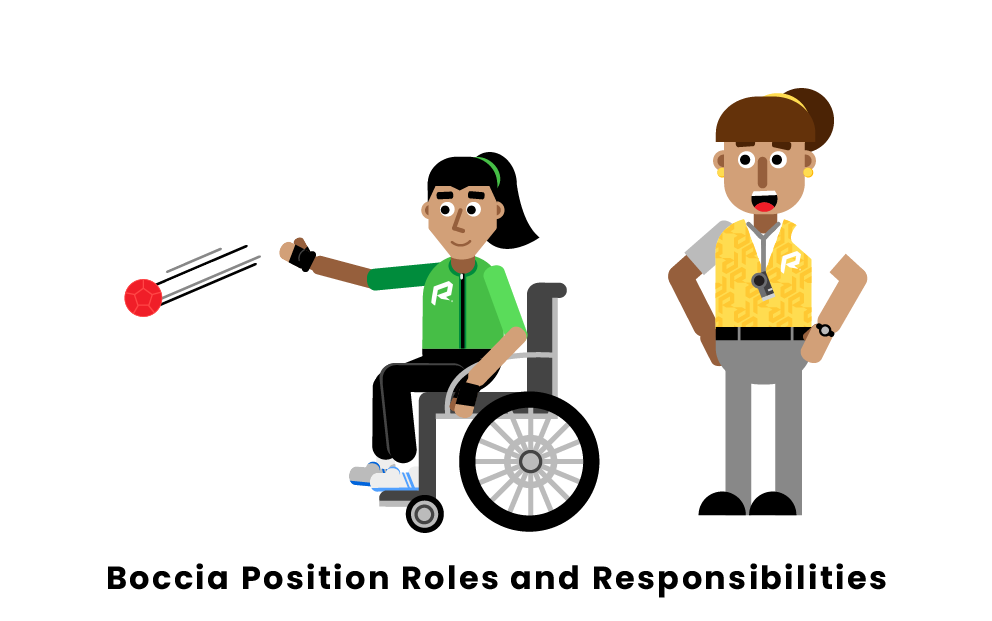 There is very little variation between teammate roles in boccia. Every athlete has a similar goal in mind when playing boccia: toss the ball as close to the jack as possible.

The only clear difference between teammates is that each side has a team captain. This is a player who takes more of a leadership role by participating in the pre-match coin toss to determine each team’s color. The winner of the coin toss chooses their team’s color first.

The team captain also chooses which teammate will perform any given throw and initiates any medical timeouts, protests, substitutions, or technicals. The team captain is responsible for their team’s communication with the referee.

There are six different types of violations in boccia, sorted according to their severity.

One Ball Penalty: The non-violating team is awarded a penalty shot after the rest of the balls are removed at the conclusion of the end.

Retraction: The ball in violation is removed from the court. Retractions penalize certain throwing violations.

Yellow Card: Player is cautioned for a more serious offence. Two yellow cards in one match results in disqualification.

Red Card: A player is immediately disqualified when they receive a red card. Their remaining balls are discarded and the rest of the team continues without them.

These five violations can be combined to discipline specific violations. For example, deliberately interfering with an opponent’s throw results in a yellow card and a one ball penalty.

Multiple violations may be assessed at one time. Assistants are also vulnerable to committing violations. 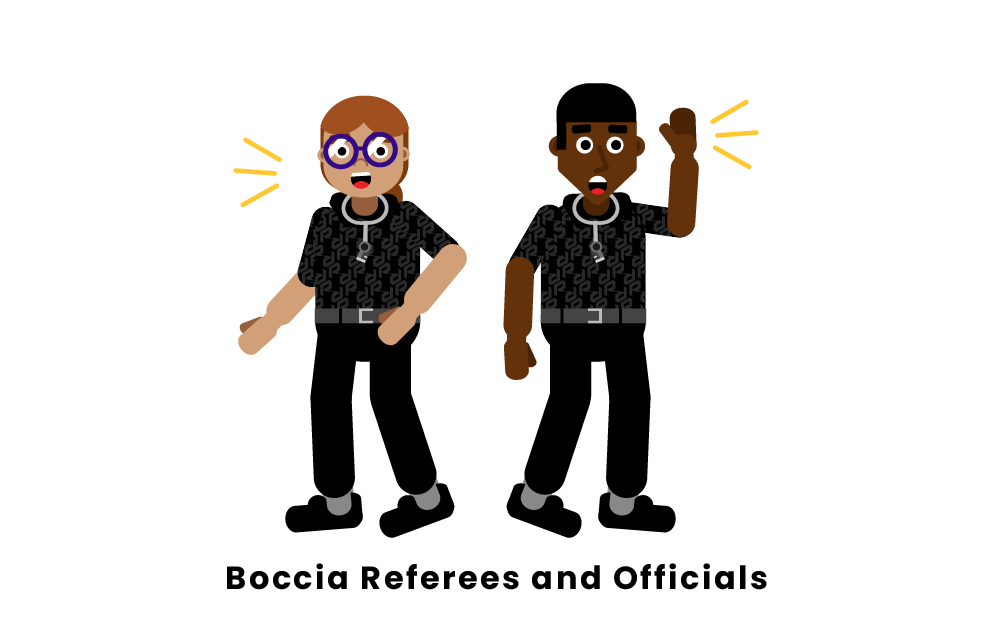 Boccia referees have many responsibilities throughout a match. As the presider over the match, the referee is responsible for scoring the game, controlling the players, dishing out consequences for violations, and much more. Every individual that is a part of a boccia match is subject to the referee and their rulings.

Any discrepancy that arises during the match is sorted out by the referee and both team captains. Generally, only team captains are allowed to communicate with referees.

Boccia players and fans have some common terms that they use to talk about boccia games. Some describe the use of equipment, while others refer to scoring or other elements of boccia.

Throwing is the most important skill to practice in boccia. Boccia players refine their skills by mastering different types of throws. Some of these throws require power to reach their intended outcomes, while others rely on extreme accuracy. 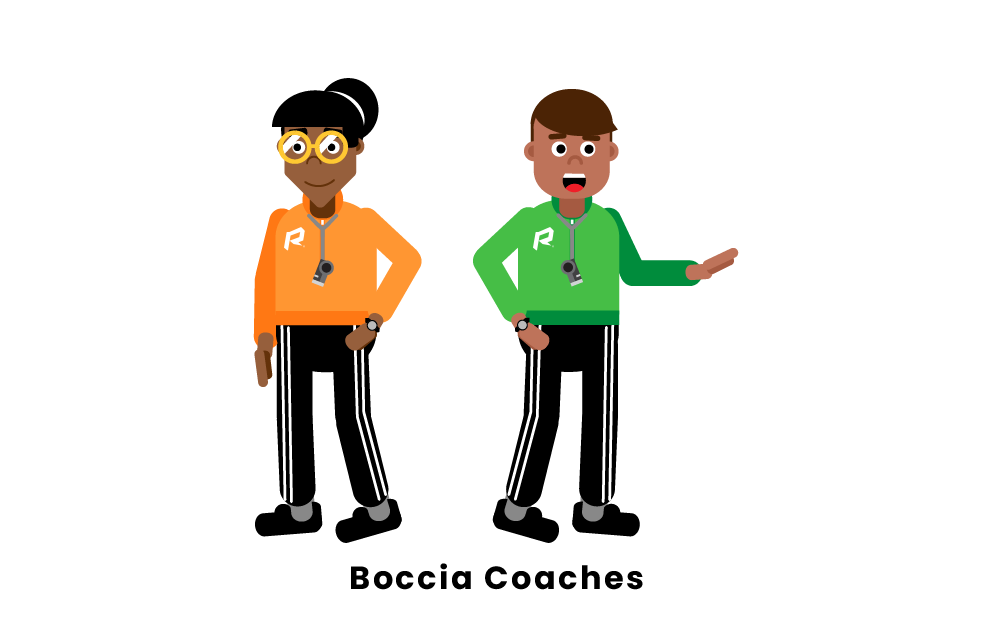 Unlike many other sports, boccia coaches are not allowed into the field of play. The idea is that players and teams should do their own strategizing between themselves, without the help of their coaches or assistants.

Boccia coaches and assistants are only there to assist players by handing them balls, adjusting chairs, etc. They are supposed to have as little effect on a match as possible.

In some competitions, boccia assistants are not even allowed to look at the court.

Being a good boccia coach includes knowing when to correct and when to step back and let players play. Improvement comes when players can demonstrate and repeat quality shots. This also means knowing when and where to throw a certain type of shot. Because the players have so much control over the game, coaches must mentally prepare their players to identify and use successful strategies.

Boccia coaching is also about organization, especially at youth levels. Coaches are often tasked with bringing equipment to matches or setting everything up.

Boccia strategy revolves around knowing which types of shots to make, when to make them, and how to make them. Players will often coordinate these shots into a sequence which is designed to earn the most points possible in each end.

Refer to the shot chart from the “Skills and Techniques” section to remember different shot types and their intended effects.

Strategies are most often reactionary, though. Sides choose how to play an end based on what their opposing side is doing (or trying to do).

The most common boccia drills are simply set scenarios in which a player has to make a difficult shot. Drills are supposed to mimic scenarios from games, so these setups can be derived from real game situations or just common occurrences.

For example, one common boccia drill is the Knock-Off Drill, in which an opposing ball and a jack are placed next to each other, touching. The practicing player must try to knock the ball away from the jack, replacing it with their own ball. This drill is simple and effective, in part because it mimics a common in-game situation.

Great boccia players are found on every corner of the planet. Players and teams from North America, South America, Europe, Africa, and Asia have competed in boccia at the Paralympic Games.

One of boccia’s most consistent players is David Smith from Great Britain. Smith has earned a total of 12 gold medals from the European Championships, World Championships, and Paralympic Games.

Many boccia leagues are purely recreational. Part of what makes boccia so appealing is its ability to be played by almost anyone, including those who would otherwise be left out of other sports that require full body movement.

Usually, a national boccia league will be run by its national boccia federation or a nonprofit charity to promote the growth and improvement of the sport across the country. This is the case with Boccia England, which runs two domestic leagues: the best teams from the National Boccia League are promoted to the Super Boccia League.

Youth boccia organizations usually compete on a very small, localized scale. Most youth boccia matches are between multiple members of a paralympic-centric club or group.

However, BISFed has been sponsoring an increasing number of youth competitions across the world, such as the CPISRA Multi-Sports Development Games and the EuropeanPara Youth Games.

Most boccia competitions take place throughout a series of “opens” or tournaments. The most important tournaments, of course, are at the Paralympic Games, which occur every four years.

There are relatively few books about the sport of boccia compared to other sports. Boccia is still a young sport, having only graced the highest international stage since the 1984 Paralympics. Most boccia books are about how to maximize one’s potential in boccia through using proper training techniques and strategies. Some books, like Paul Mason’s Paralympic Power, cover paralympic sports generally, focusing on boccia in one section.

The internet is a great resource to learn about, connect to, and watch boccia. Whether these websites are federations, organizations, educational sites, or otherwise; there are plenty of online resources to pique your boccia interest!

The majority of major boccia sites are dedicated to promoting the sport as a whole along with their competition or organization. Boccia organizations seek to grow the game generally, not just for themselves.

How is boccia played?

Boccia is played by pushing, rolling, kicking, or throwing a ball toward a common target (the “jack”). Points are scored by having more of one team’s balls closer to the jack.

Is Boccia a Paralympic sport?

Yes, boccia is a paralympic sport. Although it was originally designed for those with cerebral palsy, many boccia organizations welcome almost anyone with a disability.

It is unknown who specifically invented boccia, but it has roots in ancient Egypt and Greece.

Pages Related to What is Boccia?