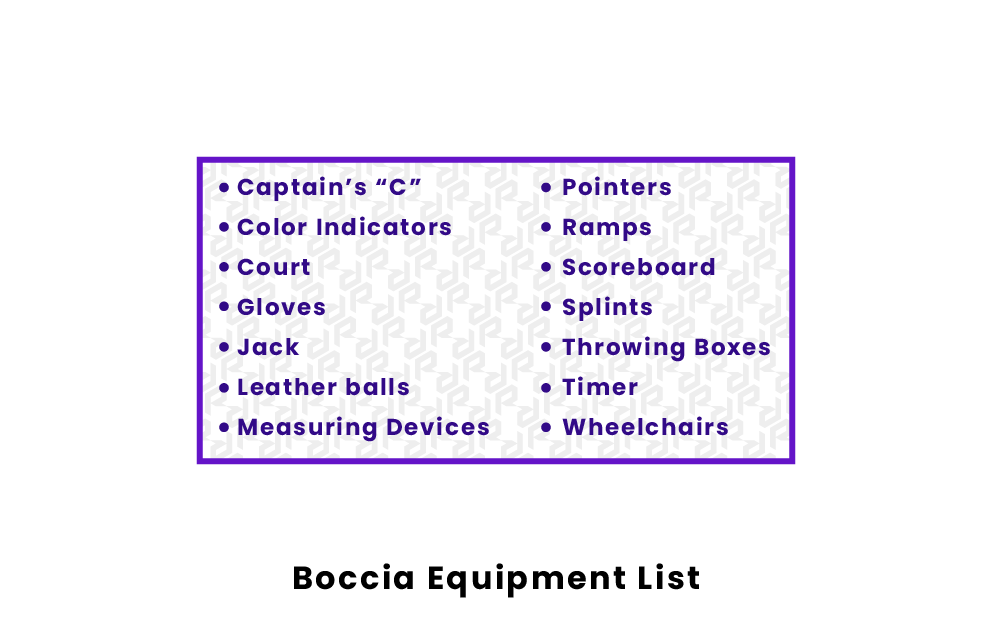 The following is a comprehensive list of equipment that is needed to play the game of boccia. While some equipment is essential for play, some is not. Other equipment is only necessary in official competitions, while certain assistive equipment is only available for use by boccia players who possess certain types of disabilities. 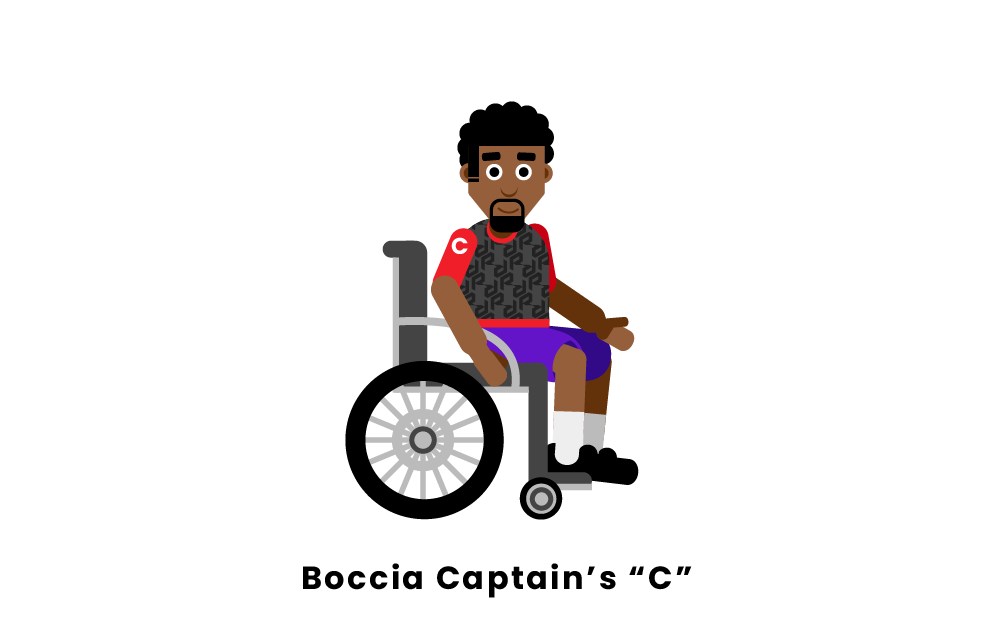 Per official boccia rules, whichever player is the designated captain of their team must clearly wear a “C” patch somewhere on their jersey. This is done during a pre-match meeting between the referee and team captains. The “C” is only required in pairs or team competitions, but not singles. Any discrepancies that might arise during a match will be talked over by the referee and team captains. All official referee communications will occur through each of the team captains, making them a very important player on each team. 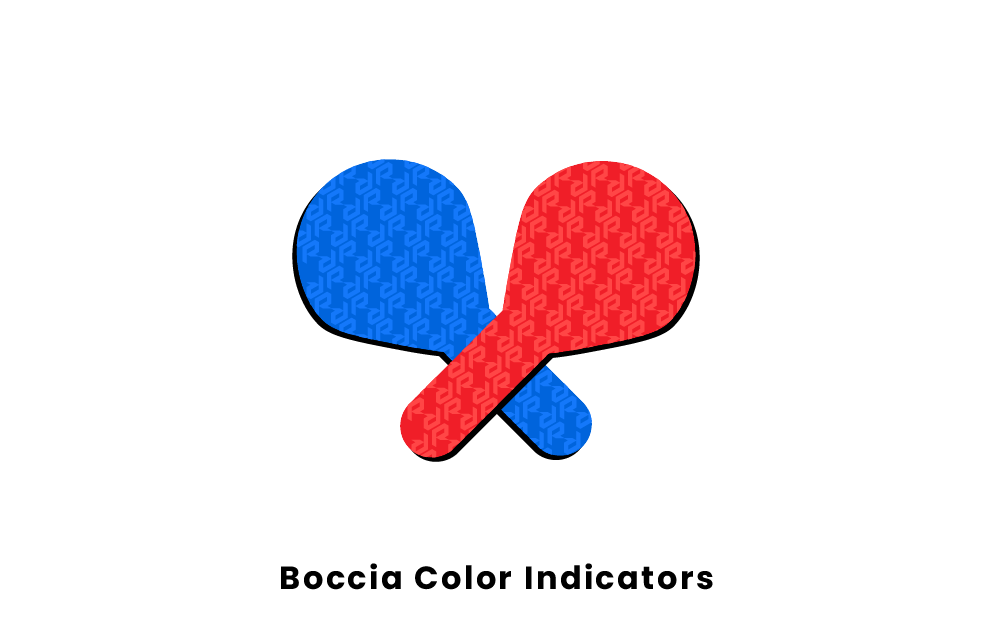 Part of the job of a boccia referee is to keep the game flowing smoothly. They can partially do this by using a color indicator, which is a two-sided paddle with one color on each side. The colors on the paddle correspond to the colors of each team’s balls. The referee will hold up the paddle and face one color to the throwers, indicating which team’s turn it is to toss. These indicators are also commonly called paddles. 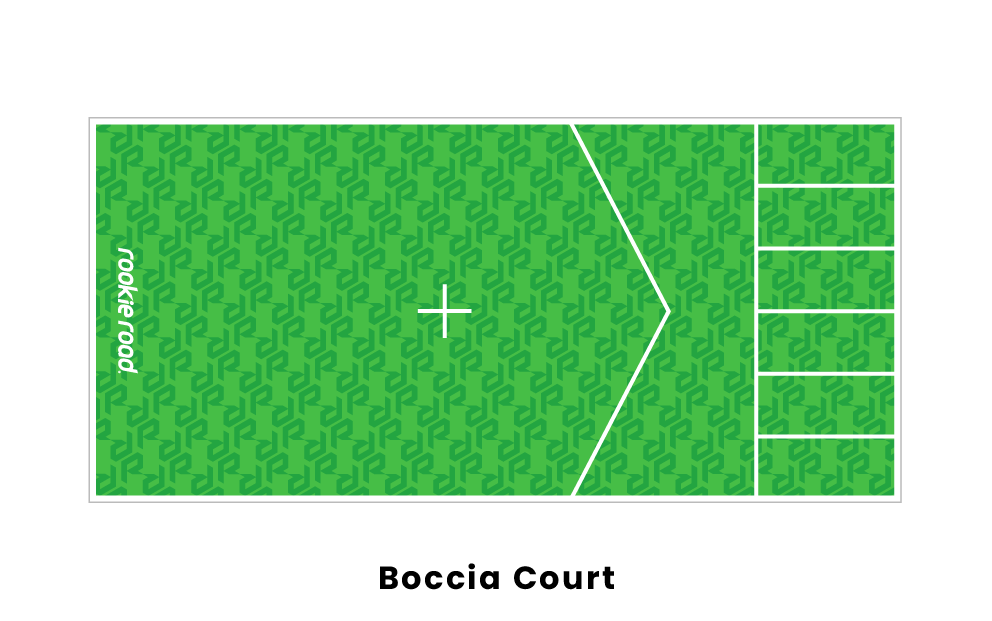 The boccia court is unique, and it is much less common to find an official boccia-specific court than, say, a basketball or tennis court. The boccia court includes throwing boxes, the “V” or non-valid jack area (if the jack lands in this area, it must be re-thrown), and the field of play. In all, the area of the court is 12.5 meters long by 6 meters wide. The non-valid jack area is located closest to the throwing boxes, while most of the space is taken up by the playing area. 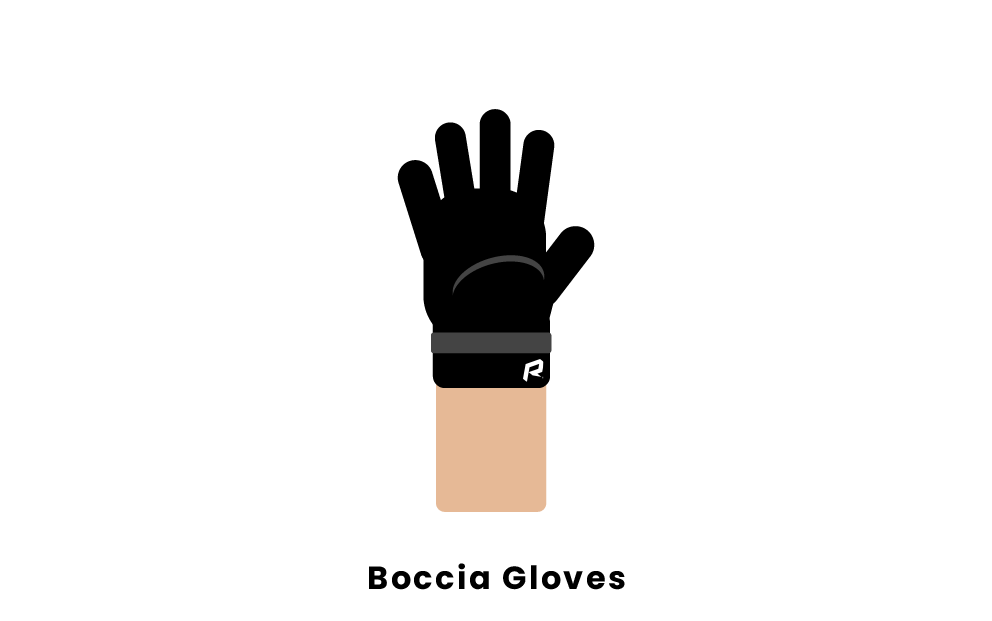 Boccia gloves are used by boccia athletes to help them make throws. Boccia gloves are thicker and stiffer than regular fashion or athletic gloves, and are designed for athletes who may have a difficult time controlling the precise movements of their hands. When an athlete is able to keep their hand steady with the use of a glove, they have more control over their hand movement, and can therefore make more precise tosses. Gloves are subject to the pre-match equipment check that is administered by the match referee. 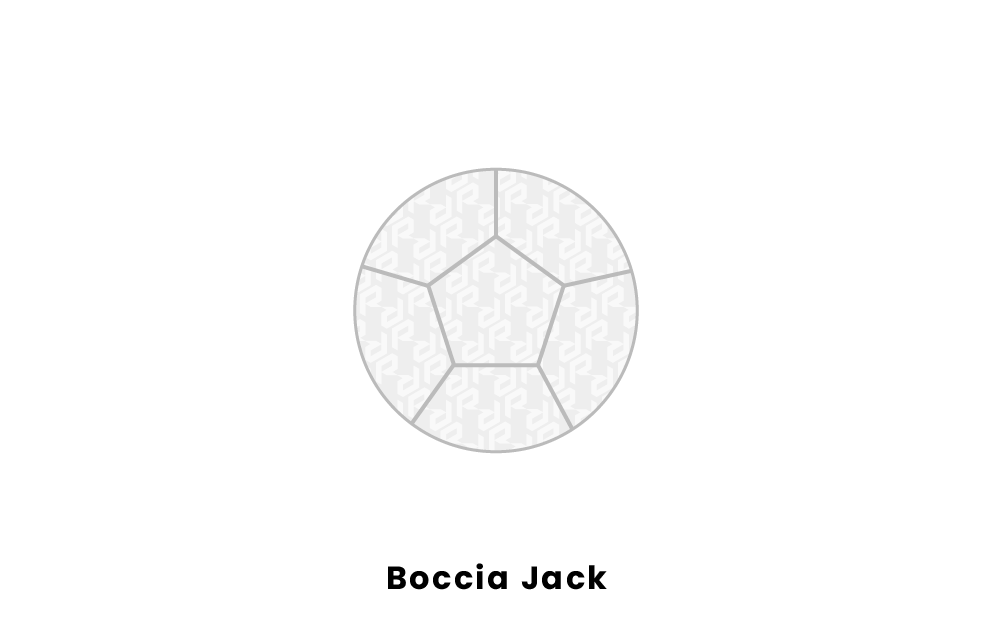 In boccia, the jack is a white ball that is thrown first to start the round. This is the target ball that competitors from both teams will aim at for the rest of the round. Each team will try to get their tosses as close as possible to the jack. Unlike other similar sports, the boccia jack is generally the same size and material as the other balls, whereas in bocce ball, for example, the jack is a smaller, harder ball. 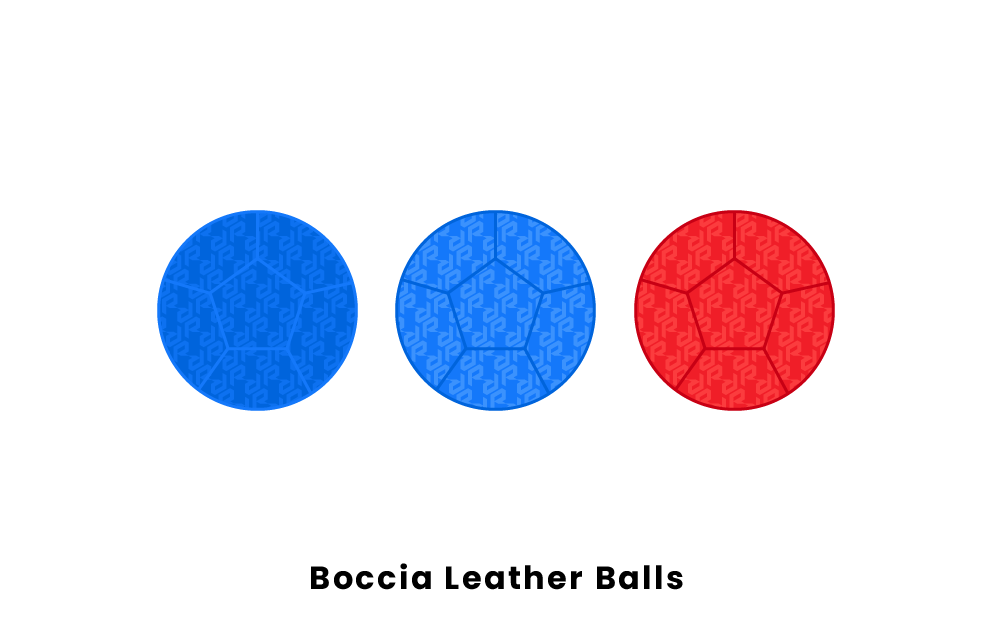 In boccia, each team receives six balls. These six balls are divided evenly among all the players in the game. Boccia balls are made of leather and must weigh around 275 grams (within 12 grams of this number). They must have a circumference of about 270 millimeters (or within 8 mm of this number). The absolute final say on whether or not a ball is legal is up to the match referee, who performs a thorough equipment check before each match.

While in similar sports, the jack is often a smaller ball, in boccia the jack may be just as big as the regular team balls. The only difference between a jack and the regular balls in boccia is the color; the jack is always white, while the other balls are colored. Typically, red and blue are the two colors used for this. 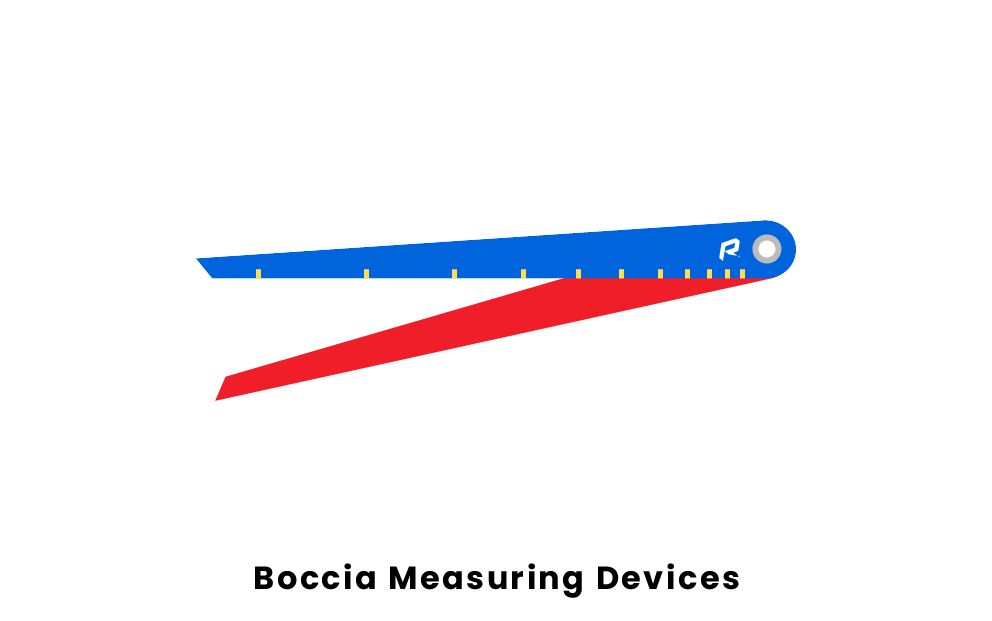 When two or more balls are too close to the jack to determine who earns points in a given round, the referee may need to utilize certain measuring devices to find the distance between each ball. These may include, but are not limited to, tape measures, calipers, and feeler gauges. Flashlights are also sometimes used to get a better look at the situation. 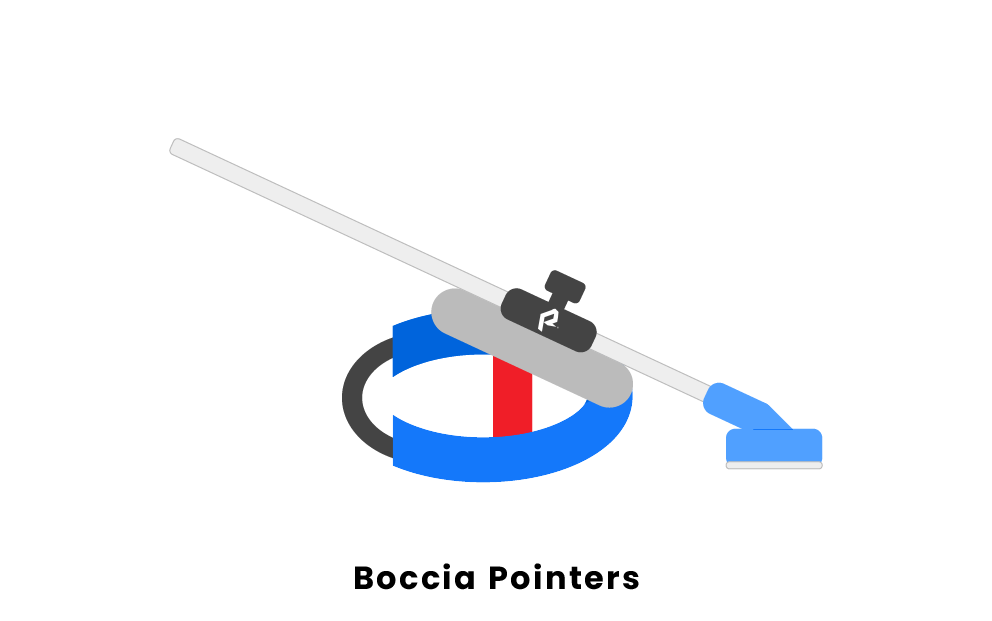 A head pointer is an assistive device used by boccia athletes to help make a more accurate throw. It allows the athlete to align themselves and orient their vision in order to make better decisions when throwing. Like other pieces of assistive technology used in boccia, head pointers are subject to the pre-match equipment check. 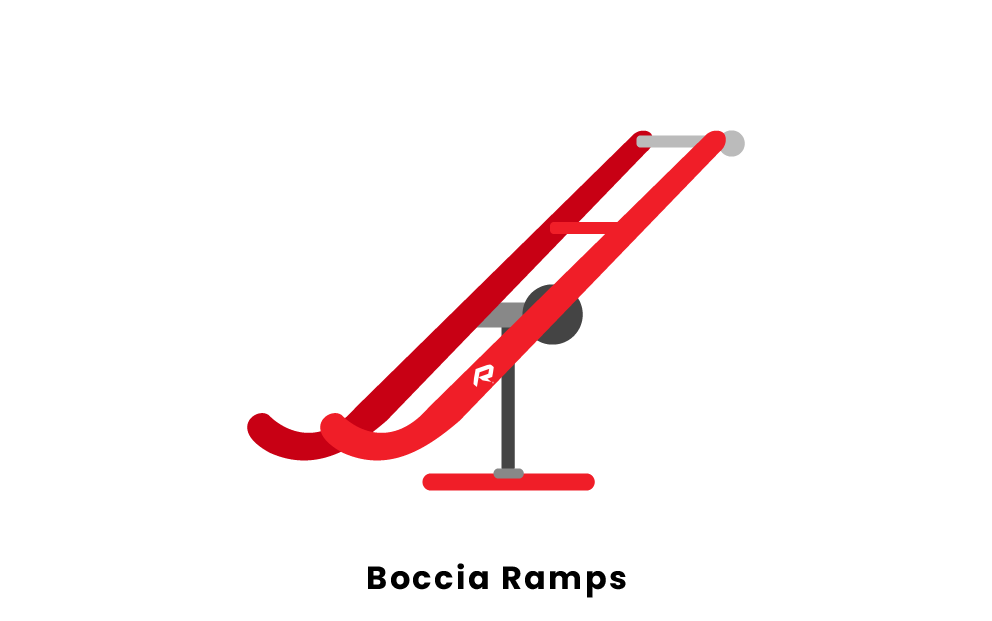 Assistive ramps are used by BC3 competitors to release the ball. These ramps, often made of plastic or a similar material, allow athletes to specify how they want to launch the ball without much physical movement. Consistent with the spirit of the sport of boccia, even athletes who are not able to move enough to throw are still encouraged to participate. Each ramp is subject to inspection by match officials and must fit into an area of 2.5 meters by 1 meter, the same size as a throwing box. Boccia ramps are subject to the equipment check prior to the start of a match. 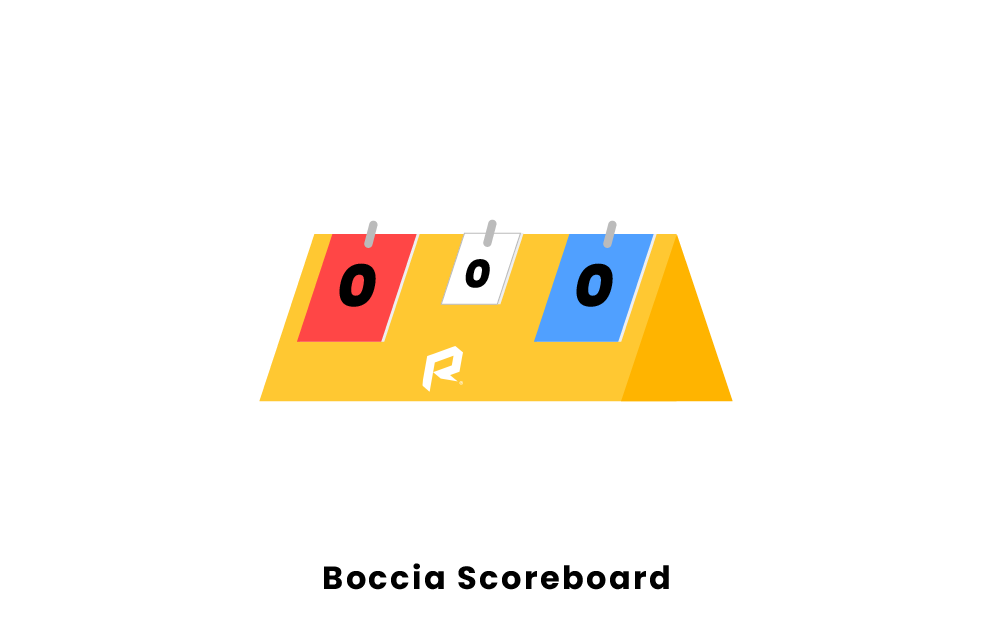 The boccia scoreboard can be as simple or advanced as the organizing competition allows. The only regulations about the boccia scoreboard is that it must be clearly visible to all competitors during play. This is important because players and teams will form strategies based on the current score of the game. For example, if a team only needs one more point to win, their opponent may focus on knocking the opposing balls away from the jack. 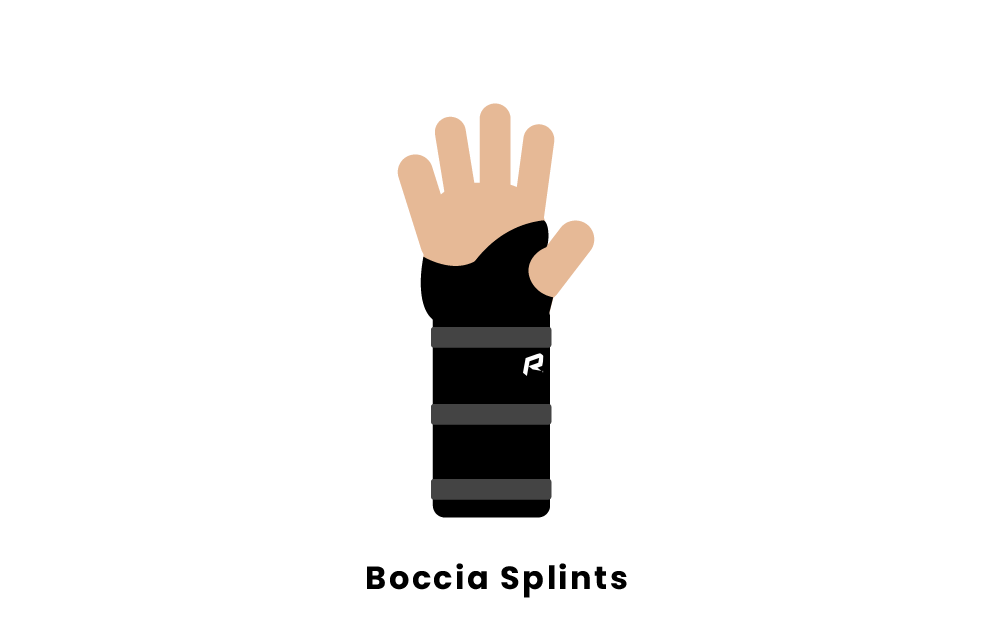 Some boccia players will wear a splint to help steady their arm while throwing. This piece of equipment is considered an accessory and not a necessity. Similar to boccia gloves, the main function of boccia splints are simply to assist the athlete in throwing the ball. They are also subject to an inspection by the referee at the beginning of a match. 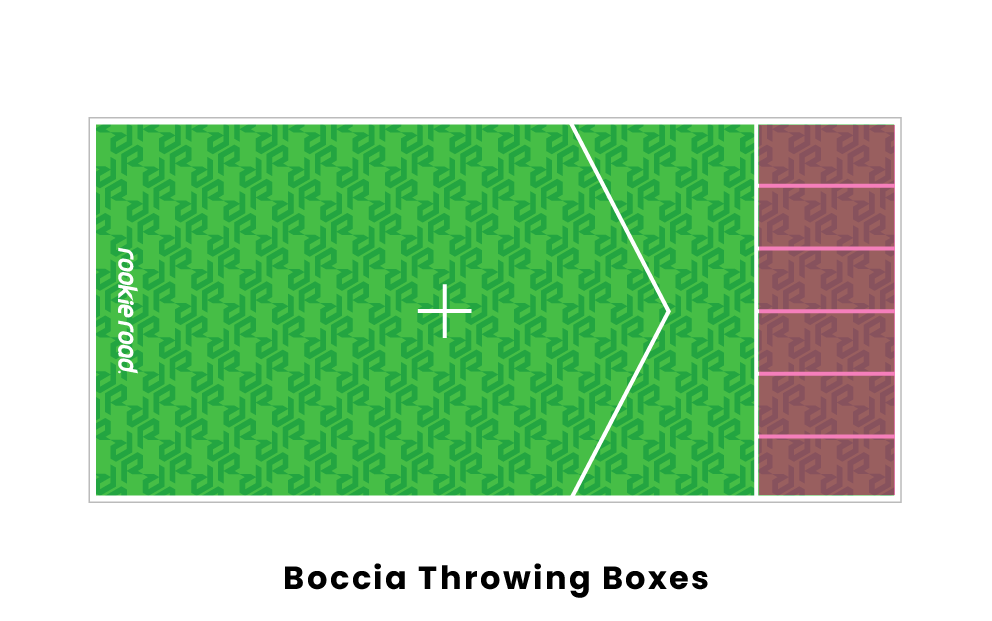 In boccia, each throw must be made from inside one of six throwing boxes. Athletes are not allowed to leave these boxes during their turns. Boccia boxes are either painted or taped on to a court made of hardwood or felt. According to the official BISFed boccia rules, all internal court markings, including the throwing boxes, should be 1.9 to 2.6 centimeters in width. The boxes themselves measure 1 meter by 2.5 meters in size. 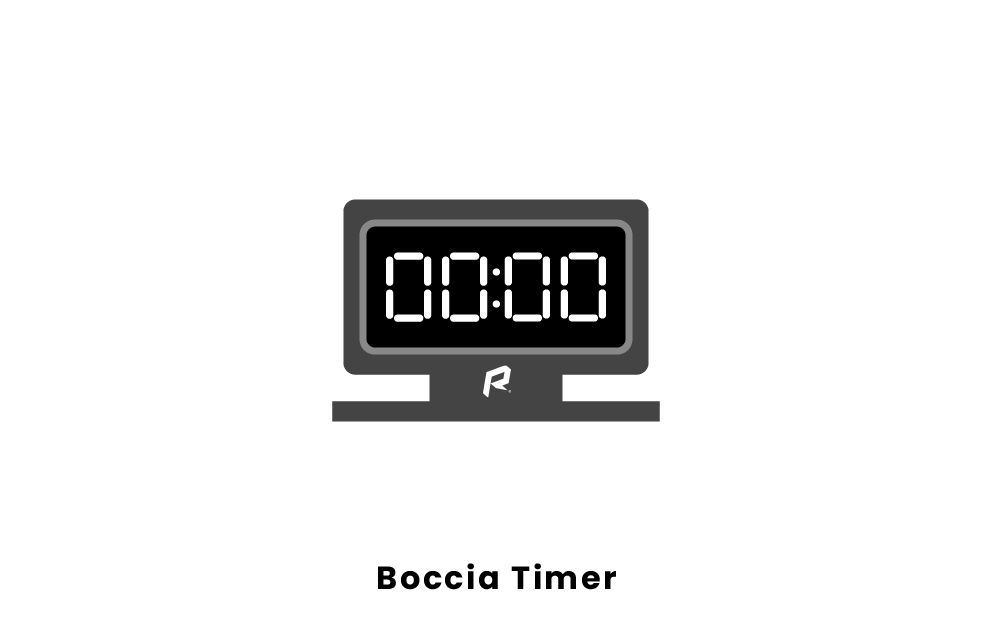 Boccia players only have a certain number of seconds to make a throw each turn. This time is kept by the referee. The only official regulation about this timer is that it must be electronic. There are even boccia timer apps that can be downloaded onto a smartphone. Some scoreboards may also have timers built-in. 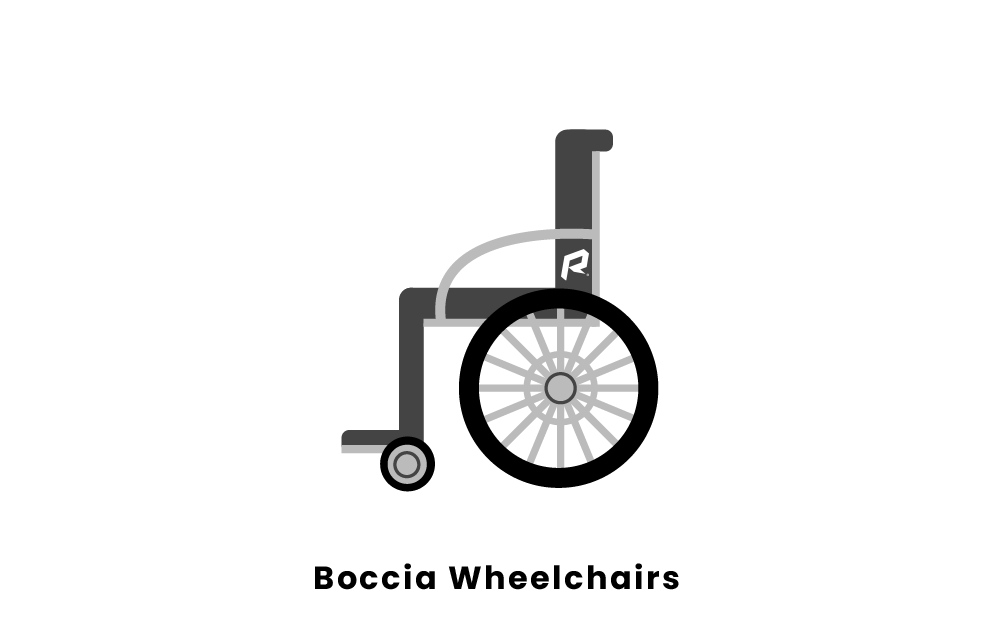 Because boccia is a sport played by athletes with disabilities, competitors are almost always seated in wheelchairs or electric scooters when playing boccia. Each wheelchair is subject to inspection by match officials, and there are a few regulations concerning the use of wheelchairs. For example, only BC3 classified competitors are allowed to have their wheelchairs as low to the ground as they want. All other classifications of boccia competitors must be seated 66 cm or less to the ground. This ensures that no player will be sitting higher up and therefore have a slight advantage over their opponents.