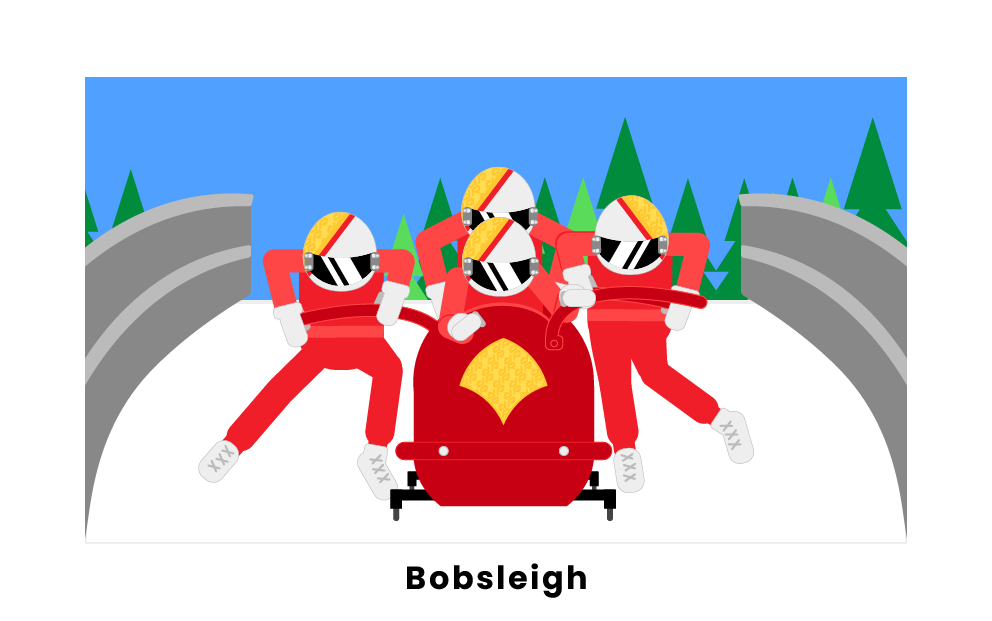 Bobsleigh, also called bobsled, is a team winter sport that has teams being timed as they ride down narrow and twisting iced tracks in a sleigh. The bobsleigh sleds carry either two people or four people. Bobsleigh is most popular around the world, during the Winter Olympics. Germany and Switzerland dominate the bobsleigh world in all three events (two-women, two-men, four-men). The United States of America are a solid team. The Jamicain team had a great story in the 1988 Winter Olympic Games. 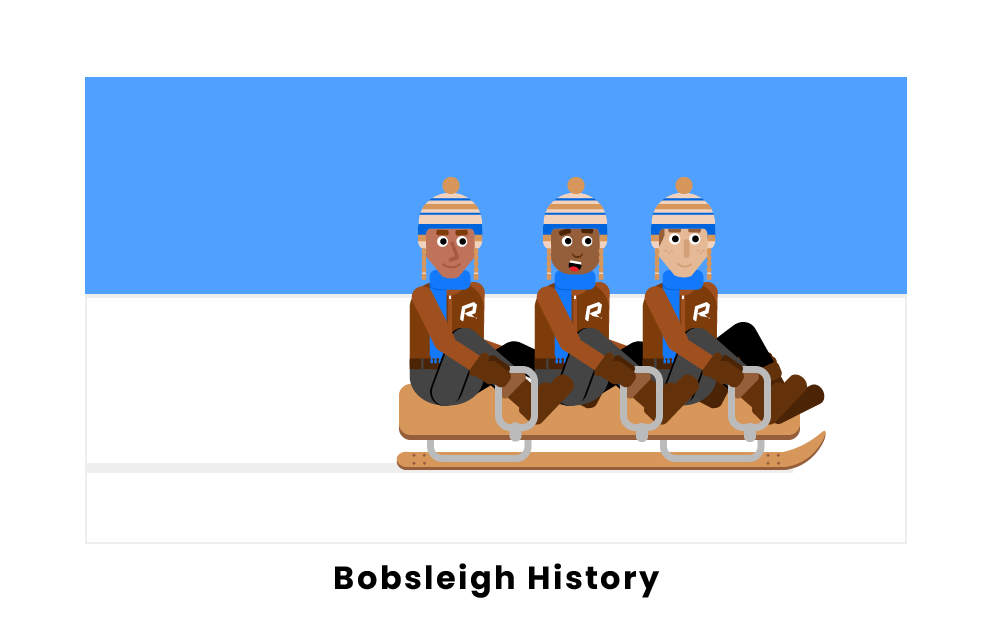 Bobsledding developed into a sport in the 1880s in both New York and the Swiss Alps. The first organized competition was held in 1898 in Switzerland. The teams consisted of three men and two women each. The name of the sport came from competitors bobbing back and forth, in sync, to increase the speed of their sleighs.

Bobsleighing was first recognized internationally as a sport in 1923 and it became an Olympic sport the following year in Chamonix, France. Bobsledding has had world championships every year since 1931, except for during World War II. International competition for women did not begin until the 1990s and the women’s two-person bobsledding event first was in the Olympics in 2002.

The slopes used in international competitions are between 1,200 meters and 1,600 meters with a slope between 8 and 15 percent. There tend to be 15 to 20 turns per course.

Early bobsleds were mostly made of wood. Steel sleighs were adopted by the middle of the 20th century and steel and aluminum sleighs have been used ever since.

As bobsledding began to take off in the 1930s, the United States were a powerful force due to innovative sleigh designs. Since the 1960s, Germany and Switzerland have dominated international competition.

There are 18 bobsleigh runs across the world and 16 of them have been International Bobsleigh and Skeleton Federation (IBSF) approved. The IBSF regulates the length, the curves, the turns, the vertical drop, and more of the courses. They aim to make the race tracks safe yet challenging and competitive. Only one course in the world uses all natural snow and ice. That track is located in St. Moritz, Switzerland.

At the top of each track there is a straight-away to allow the racers to begin their run and push-off before the hop in the sleigh. The push-off and beginning of the race is instrumental to doing well in competition. 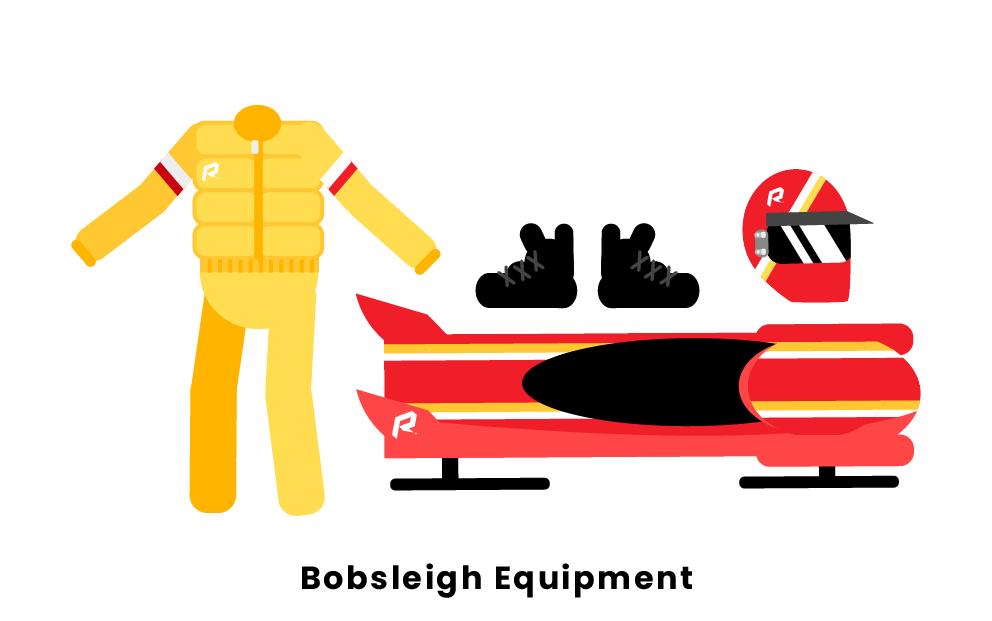 Bobsleigh is a sport very dependent on its equipment. The equipment helps to make sure the athletes are safe and secure and essentially is a huge part of success (when considering the sleigh).

The pilot of a team sits in the front of the sleigh and steers it. The brakeman sits in the back of the sleigh and uses the brakes when deemed necessary. In a four-person sleigh, the middle two athletes are pushers who add force and weight, resulting in quicker speeds down the race track.

Either two or four athletes are on a team together, depending on the event (two-person or four-person bobsleigh). The athletes start at the top of an icy race track that twists and turns down about 1.5kilometers. The athletes start by pushing their sleigh and then hopping in it after they have gained speed and start to go down the slope. The teams are timed and the times are compared to other teams racing down the same icy race track. 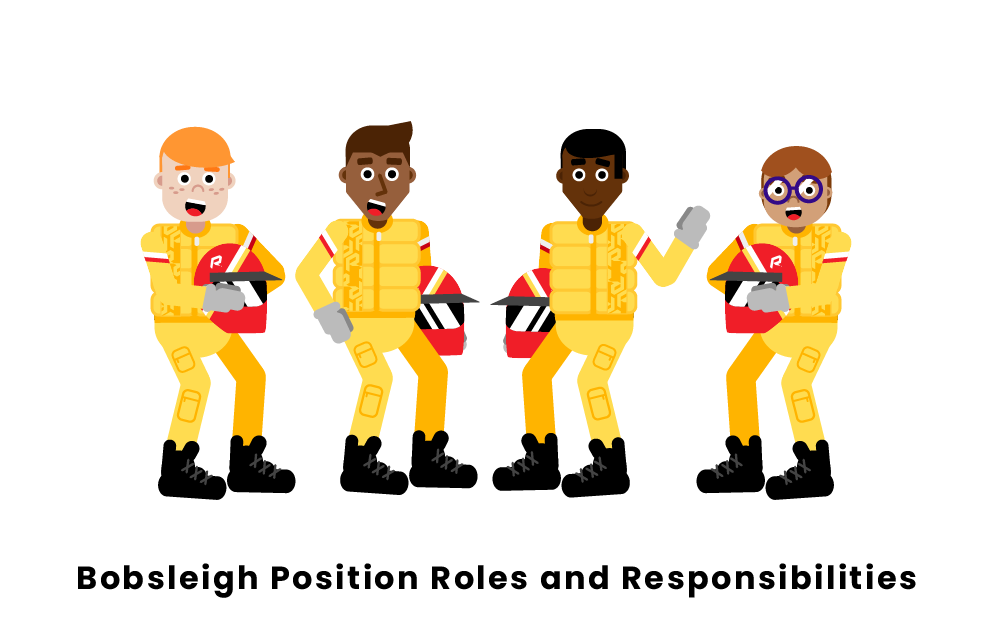 The beginning of the race is also crucial to success, as the athletes must push the sleigh with quick, strong force to get off to a great start. The pilot has to be able to steer the sled with precision to avoid crashes and stay fast. The brakeman must also know when to brake to avoid losing speed, but also to stay upright.

Below are the main rules and regulations of bobsleigh that keep the sport safe and competitive.

Athlete Safety: All athletes must wear helmets, eye protection, uniforms, spiked shoes, and Kevlar vests (for brakemen to prevent friction) for their safety.

Bobsleigh officials have the job of making sure the race tracks are under regulation and ready to hold safe competition. They also make sure that teams are following equipment and weight rules. Bobsleigh officials make sure the start and finish areas are run smoothly and safe for teams to compete in. They also track times, with assistance, of each team and declare the winners of the event.

Below is commonly used lingo and terminology in the sport of bobsleigh.

Below are some of the top bobsleigh leagues across the world. The most competition is definitely with the IBSF and international competition at the yearly World Championships and the Winter Olympics.

Bobsleighing is a very high-speed sport in which the fastest bobsleigh to cross the finish line is the winner. Each sled travels along curvy, iced tracks. At the beginning of the race, which is vital to a team’s success, team members will run alongside the sled until it picks up speed, which is when they hop into the bobsleigh. A four-person bobsleigh can reach speeds of nearly 100 miles per hour. The two-person bobsleigh runs somewhat slower but still achieves a high speed.

Is bobsleigh an official sport?

Yes, bobsleigh became an official sport in 1923. There are Bobsleigh World Championships held every year along with many other tournaments. Bobsleigh is also a Winter Olympic sport.

What are the different types of bobsleigh?

Pages Related to What is Bobsleigh?