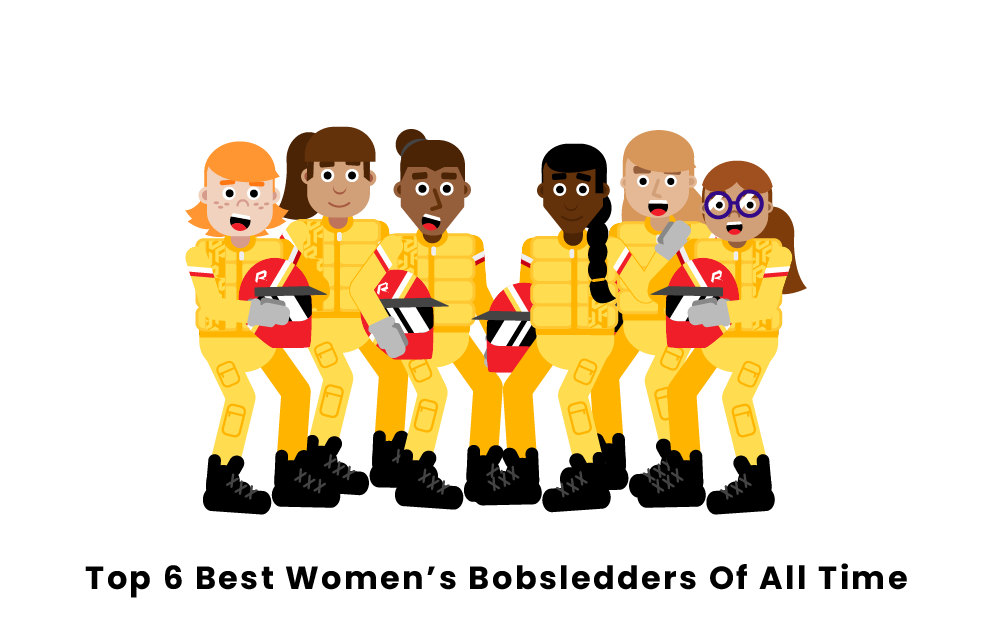 First included in the Winter Olympics in 1924, bobsleigh was initially only a men's event. It was not until 2002 that a women's event was added to the Winter Games, with a second women's event scheduled to be added in 2022. However, in the short time that women's bobsledding has been part of the Olympic Games, it has grown in popularity and highlighted the accomplishments of many great athletes in the sport, the top six of whom are listed below.

Who are the best women's bobsleigh athletes of all time?

A Canadian athlete in women's bobsledding, Kaillie Humphries is notable for being one member of the two-person team to be the first Canadian women bobsledders to win Olympic gold, along with her partner, Heather Moyse. Growing up in Western Canada, Humphries initially pursued alpine skiing as her sport but switched to bobsledding at 16. In the first few weeks of her bobsled pilot training, she suffered a broken collarbone in a dangerous crash but recovered and resumed her training as a brakewoman. Her growing skill in that position led her to the 2006 Turin Winter Olympics, where she qualified as an alternate but was not selected to compete. After this, she turned her attention back to piloting a bobsled and gained skill in that position as well, winning impressive victories in the Europa Cup between 2006 and 2010.

In 2010, Humphries entered the 2010 Vancouver Winter Olympics, winning her first gold medal in bobsledding with her partner, Heather Moyse. However, Humphries struggled in her career over the following two years, only placing third and fifth in the World Cup standings. In 2012-13, she resurged, becoming the first Canadian woman to finish first overall in the World Cup, and she repeated the same victory a year later, becoming a favorite for the 2014 Sochi Winter Olympics. In Sochi, Humphries and Meyers initially struggled to defend their gold, coming in second in their first two runs. However, after successful third and fourth runs, they managed to win gold again by a margin of 0.1 seconds. In the same year as the Sochi Games, Humphries made history by joining Elana Meyers Taylor in the first-ever Women's vs. Men's Bobsledding Competition. Humphries repeated her success in the 2015 World Cup, winning overall once again, and participated in a second Women's vs. Men's race in 2016. She also won bronze at the 2018 Pyeongchang Winter Olympics with her new partner, Phylicia George.

Growing up in a small Canadian town, Heather Moyse was a natural athlete throughout her youth and decided to pursue bobsledding professionally. By age 27, she had Olympic coaches asking her to perform at the 2006 Turin Games, and she joined the team only five months prior to the opening ceremony. She did not medal in 2006 and faced a number of challenges afterward, including hip and ankle injuries that required surgery, but her perseverance led her back to the Olympics in 2010, this time held in her home country, in the city of Vancouver. There, she joined her partner, Kaillie Humphries, in becoming the first Canadian women's bobsled team to win Olympic gold.

After the 2010 Games, Moyse briefly switched sports to compete in the Rugby World Cup but eventually returned to bobsledding for the Sochi 2014 Games, where she and Humphries narrowly defended their Olympic gold, winning their second medal. Moyse competed in other sports throughout her professional career and returned to the Olympics for the 2018 Pyeongchang Games, competing alongside a new partner and placing 6th in the two-woman competition.

An American bobsledder born in Oceanside, California, Elana Meyers Taylor played professional softball for years before she began bobsledding in 2007, at the age of 23, and joined Team USA for the Winter Olympics in Vancouver in 2010. There, she served as brakewoman for pilot Erin Pac, and together, they earned a bronze medal in the two-woman bobsledding event. After Vancouver, Taylor began to train as a pilot herself, and returned twice more to the Olympic Games, once in Sochi in 2014 and again for the 2018 Pyeongchang Games. She won a silver medal in both of those Olympic outings. In addition to her Olympics experience, Taylor has a number of World Championship medals in various bobsledding events, including golds won in 2012, 2013, 2015, and 2016, silvers in 2009 and 2013, and bronzes in 2012 and 2016. Taylor has achieved many other accomplishments in bobsledding, including joining fellow bobsledder Kaillie Humphries as part of a Women's vs. Men's bobsledding competition, where both were part of bobsledding teams composed of both men and women.

Originally a sprinter and long jumper for the University of Alabama at Birmingham, Vonetta Flowers turned to bobsledding in the early 2000s, making it onto the first-ever women's bobsledding team for the United States of America. At the 2002 Salt Lake City Winter Games in Utah, Flowers made history on her home soil when she served as brakewoman alongside pilot Jill Bakken. The pair won the first-ever women's bobsledding event at the Winter Olympics, taking home the gold medal. The win was also special for Flowers, as she became the first-ever black athlete to win gold at the Winter Olympics.

Flowers returned to bobsledding in 2003 with a new pilot, Jean Racine-Prahm, whom she also competed alongside in the 2006 Turin Games, finishing in 6th place. At the 2004 World Championships, Flowers and Racine-Prahm won a bronze medal. Flowers retired from bobsledding after the 2006 Olympics to raise her twins.

Born in 1994, German bobsledder Lisa-Marie Buckwitz is a rising star in bobsledding and has achieved a number of notable victories in recent years. In 2016, shortly after graduating from secondary education, Buckwitz was named to the German Olympic squad, which she remains on to this day. In the 2016-17 bobsledding season, she participated in both the IBSF World Cup and the World Championships, winning a silver medal in the latter. She also took home a bronze medal in the 2016 European Championships and a silver medal in the 2018 European Championships.

In 2018, Buckwitz made her Olympic debut at the Pyeongchang Winter Games in Korea. There, she served as brakewoman for pilot Mariama Jamanka in the two-woman event, which they won, earning a gold medal. After her Olympic victory, Buckwitz began training to be a bobsled pilot. In 2021, Buckwitz came in second place in the Junior World Championships at St. Moritz, Switzerland, and also came in first place overall in the European Cup bobsledding season.

When was women's bobsleigh first introduced in the Winter Olympic Games?

What is the best two-woman bobsleigh team of all time?

The best two-woman bobsleigh team of all time was the team of Canadians Kaillie Humphries and Heather Moyse. After winning gold in the bobsledding event during the 2010 Vancouver Games, in which they became the first Canadian female bobsledders to win gold at the Winter Games, Humphries and Moyse sought to reclaim their title in 2014 at the Sochi Winter Games. Though they started off rough, drifting behind in their first two runs, the pair managed a miraculous 0.1-second victory after their third and fourth runs, holding onto their gold medal.

Who has won the most IBSF World Championship wins in women's bobsleigh?

Pages Related to Top 6 Best Women's Bobsledders Of All Time