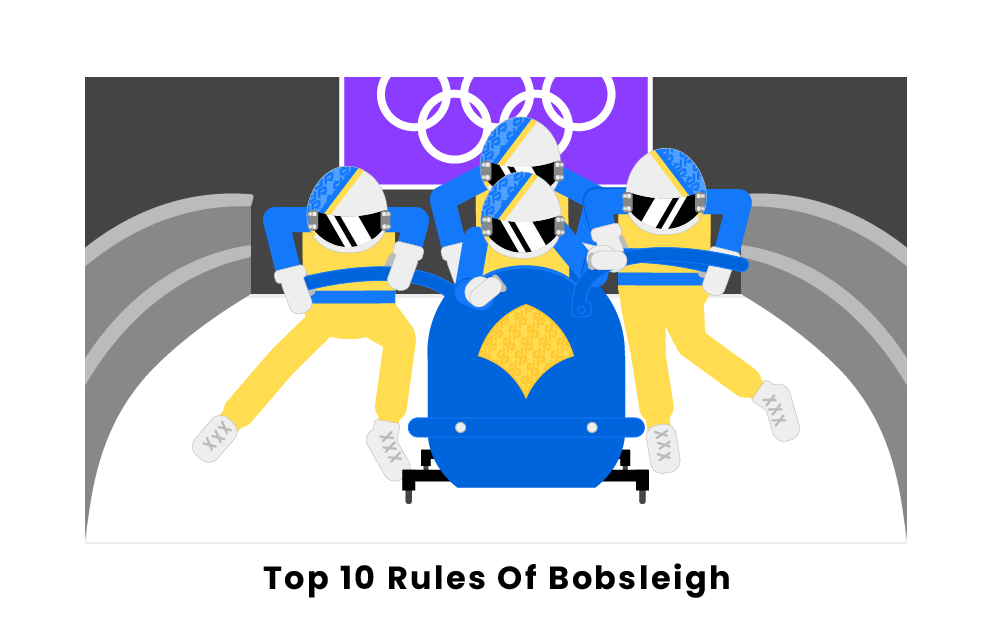 Bobsleigh, also known as bobsled, is an extremely high-speed winter sport that takes place on a long, winding, slippery track of ice. Races consist of between one and four athletes whose goal is to cross the finish line and achieve the fastest time. Keep reading to learn about the top 10 most important rules of bobsleigh.

What are the most important rules of bobsleigh?

In the Olympics, there are four bobsleigh events. The four bobsleigh events are a two-man event, a four-man event, a two-woman event, and a one-woman (monobob) event. In the two-man and two-woman events, there is a pilot and a brakeman. In the four-man event, there is a pilot, a brakeman, and two crewmen. In the women’s monobob event, there is one pilot. Each discipline is held on the same track, meaning every event will cover the same distance. Additionally, the timing system and general rules are consistent throughout each event. 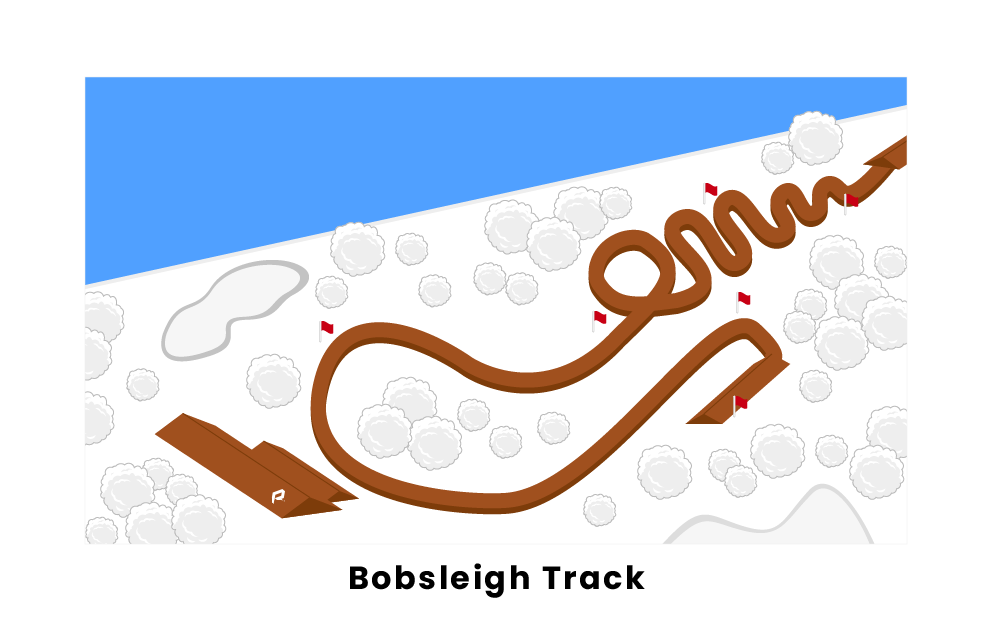 As one of the fastest sports in the Winter Olympics, alongside luge and skeleton, bobsleigh tracks must meet certain parameters to ensure the sport can be as safe as possible. The length of a bobsleigh track is typically between 1200 meters and 1600 meters. The track, made of concrete covered in ice, must be made so that a sled can reach from 80 miles per hour to 100 miles per hour within the first 250 meters. A bobsleigh track must also feature at least 15 turns, a labyrinth section (three quick turns in close proximity), and a straight section. Additionally, the track should be on a downward sloping elevation, dropping from 110 meters to 125 meters over the length of the track.

In a high-speed sport such as bobsleigh, safety precautions are of the utmost importance. Both safety gear and rules are required in order to ensure each athlete’s safety. Every athlete wears a plastic helmet, goggles, spiked shoes, and a tight-fit uniform. The spiked shoes are for traction on the slippery ice since the athletes are running before getting into the sled. Every brakeman wears a protective (Kevlar) vest to protect them from burns during friction between the sled and the ice. 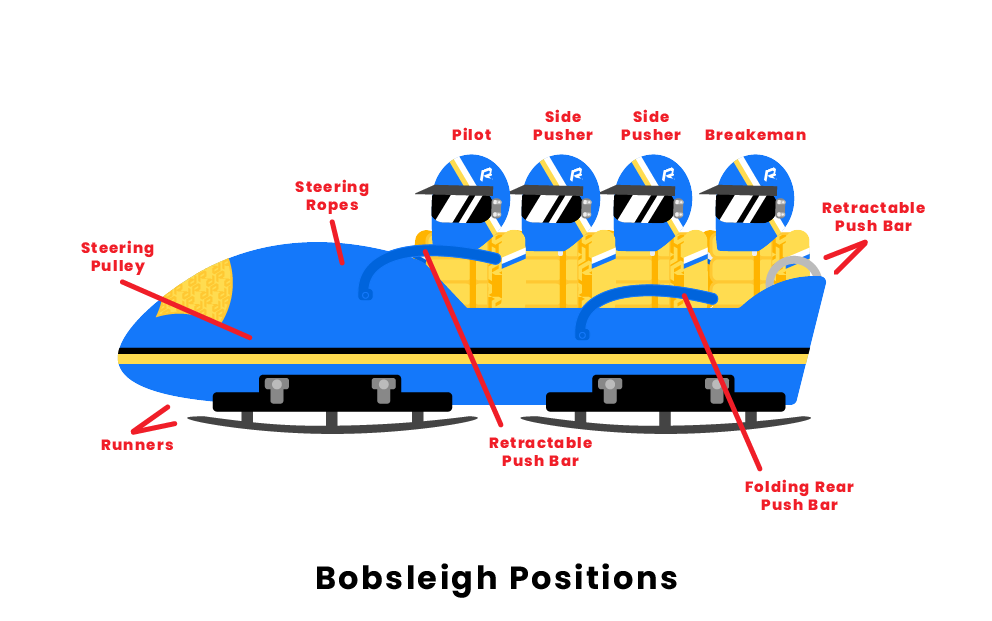 The positions are essentially the same in the different bobsleigh events, with varying amounts of athletes in the sled. The athletes are always arranged in a straight line from the front to the back of the sled. In the two-person bobsled events, there is one pilot and one brakeman. The pilot’s role is to steer the sleigh along the ice track by pulling on the right and left D-ring handles. The brakeman’s role is to slow the sled down when approaching turns and stop the sled at the end of the track. In four-person events, two crewmen help push the sled to gain speed before jumping in and helping the sled maintain its balance. Players that are not the driver keep their heads tucked in during the ride to ensure balance.

Bobsled scoring is based on time, so it is important the races are timed correctly. The races are timed using computers to ensure accuracy. A race begins when the front of the sled goes past the electric eye, which essentially creates an electronic starting line. The sleds are timed throughout their paths on the iced track and finish the race when they pass the finish line. The timing is measured to the hundredth of a second. If any number of teams have the same time, they tie in scoring and are awarded the same medal.

Bobsledding is scored based on the time it takes the sled to complete the race. In the Olympics, a team will race four times over two days. These four times are added together to create the total time, which scoring is based on. All it takes for a team to complete a race is that the sled passes the finish line, no matter if it crashed and was sliding, flipped on its side. While extremely rare, if there is a tie in Olympic bobsleigh, the teams would both be awarded the medal.

In bobsleigh, substitute athletes are occasionally needed if an athlete is injured or ill. Since bobsledding is such a fast sport, the ice track is designed so that if there is a crash and an athlete is injured, they can be promptly escorted off no matter where on the track they are. Except for the pilot, any position can be replaced with a substitute from the same team. To make a substitution, the team captain must provide a written request, and the team doctor or race doctor must present a medical certificate. 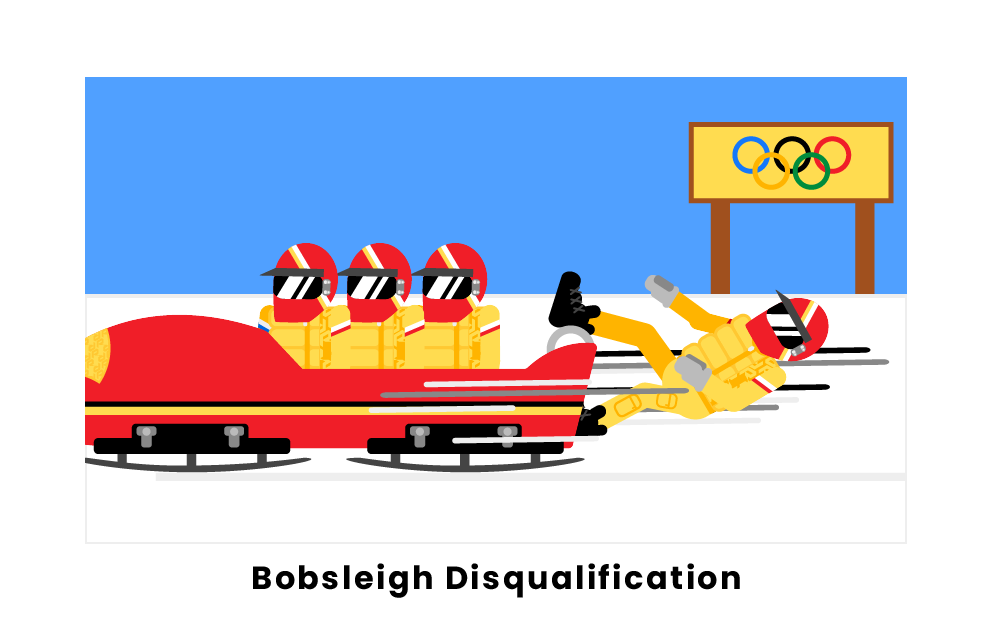 There are a few instances that would result in a bobsled team being disqualified from a race. One reason for disqualification could be if the runners that support the sled are more than 4 degrees above or below their standard temperature because this affects the sled’s speed. The temperature of the runners is measured before each race. Another cause of disqualification from a race is if the sled’s weight, including the athletes inside it, is over the permitted maximum weight. Depending on the event, the bobsled has different weight standards. If a sled crashes or is flipped upside down, causing a player to be thrown from the sled, the team is disqualified as well.

To qualify to compete in the Winter Olympics, an athlete must be ranked highly in the world rankings. These rankings are largely determined by performance in other major international competitions. There are 170 spots for Olympic athletes in bobsleigh: 124 spots for men and 46 for women. In order to qualify as a pilot, an athlete must have competed in eight races on three distinct tracks, ranked in at least five of the races on two separate tracks, and ranked in the top 50 (men’s) or 40 (women’s).

Bobsleigh is an international winter sport that takes place on a long, winding, downhill track of ice. Bobsleigh originated in St. Moritz, Switzerland, and is now an Olympic sport. It is an extremely fast-paced race, with heavy sleds and athletes who wear protective gear to ensure their safety. There are many rules in bobsleigh meant to keep it safe and entertaining, but the simple premise is that the team who reaches the finish line in the least amount of time wins the race.

What are the dimensions of an Olympic bobsleigh track?

Though the lengths of various Olympic bobsleigh tracks have differed in the past, every track is typically between 1200 and 1600 meters. Olympic bobsled tracks must also be slightly downhill, with an elevation change of between 8-15% from start to finish. They have to contain both straight sections as well as numerous curves. Specifically, a bobsled track must contain a labyrinth, a part of the track that has three consecutive tight turns. Bobsled tracks are made of concrete and metal, covered in ice. However, one track, the St. Moritz-Celerina in St. Moritz, Switzerland, is made of natural snow and ice.

What is the consequence for falling off the sled in bobsleigh?

Along with disqualification, falling off of the sled in bobsleigh could cause serious injury to one or more athletes. Additionally, competitors will be disqualified for falling off their sled mid-race. Bobsleds travel down the ice at such a fast velocity and are so heavy that it is very severe when a sled crashes and throws an athlete off. Concussions and burns are common bobsleigh injuries because when the athletes are thrown off, their bodies still travel at extremely fast speeds down the track and create a lot of friction.