What is Freestyle BMX? 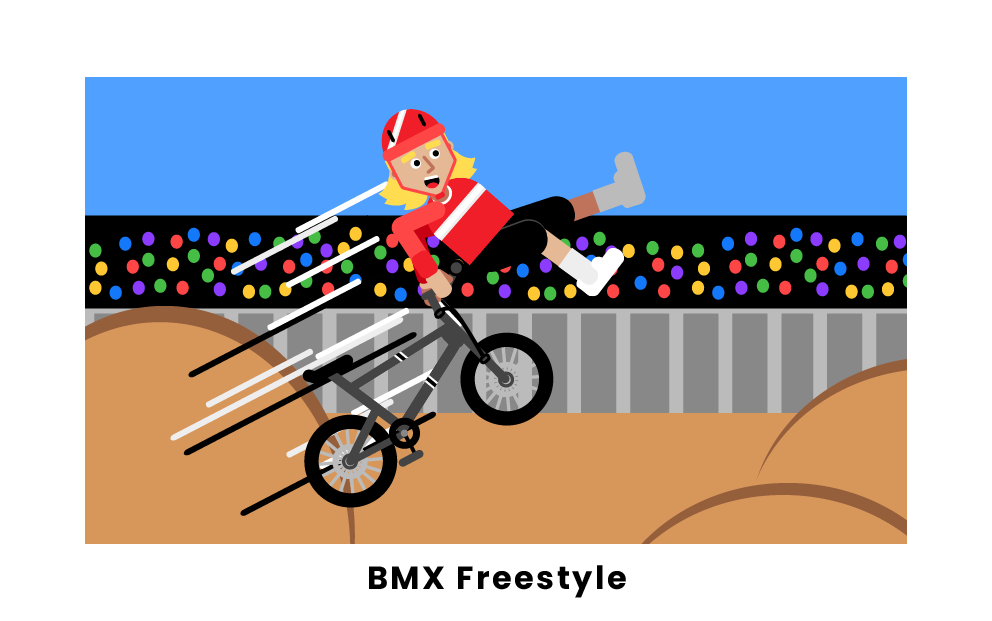 Freestyle BMX is a sport where bicyclists ride and perform tricks or routines using specialized, all-terrain bicycles known as BMX bicycles. BMX (short for “bicycle motocross”) bicycles were first invented in the 1970’s and were designed as cheap alternatives to motocross bicycles. BMX bicycles were created with lighter frames, better springs, and stronger tires to accommodate faster speeds, greater tricks, and variable terrains. In 1972, BMX bicycles became extremely popular in the United States, with many people modifying and building their own off-road bicycles. This inspired manufacturers to create newer and cheaper BMX models to respond to the growing demand.  Among the more notable BMX manufacturers in the early 1970’s was Haro Bikes, a Mountain and BMX bicycle manufacturing company founded by Bob Haro, who is credited with popularizing freestyle BMX in the United States.

Freestyle BMX is a popular televised sport, and in 2021, the sport gained new status when it first debuted at the delayed 2020 Olympic Games in Tokyo, Japan. In the first-ever Olympic freestyle BMX park events, Men’s Gold, Silver, and Bronze Medals were won by Logan Martin of Australia, Daniel Dhers of Venezuela, and Declan Brooks of Great Britain. Women’s Gold, Silver, and Bronze Medals were won by Charlotte Worthington of Great Britain, Hannah Roberts of the United States of America, and Nikita Ducarroz of Switzerland.

What is freestyle BMX?

Freestyle BMX is an extreme sport where cyclists on lightweight, modified BMX bicycles perform elaborate routines and tricks. BMX first emerged as a sport in the 1970’s and quickly became popular worldwide. Bob Haro, the founder of Haro Bikes, is credited with the sport’s initial popularity. A popular televised sport, freestyle BMX made its Olympic debut at the 2020 Games in Tokyo, Japan.

What are the biggest freestyle BMX events?

One of the largest and most popular freestyle BMX events is the annual X Games, broadcast by ESPN. The first X Games were held in Rhode Island, USA in 1995, and included sports like freestyle BMX and extreme skateboarding. Today, both Summer and Winter X Games are held, with the winter games including extreme sports like skiing and snowboarding. Other well-known BMX events include the annual USA BMX Freestyle National Championship.

What equipment do I need for freestyle BMX?

To perform BMX safely, there are a number of essential pieces of equipment. Most important is the riding helmet, which is recommended to be a full-face helmet to protect the face, mouth, and teeth and must pass CPSC standards. Regulations require that BMX riders wear a long-sleeved shirt, but most bicyclists also choose to wear elbow and forearm pads, as these body parts are the most exposed in BMX freestyling. Knee and shin pads are also a common choice, and some riders even choose to wear neck guards. A good pair of BMX gloves, specially made to grip the bicycle, are a must, as are goggles, BMX pants, and a BMX jersey. Of course, it is also important for BMX riders to choose a sturdy and well-made bicycle to perform their tricks.

Pages Related to What is Freestyle BMX?