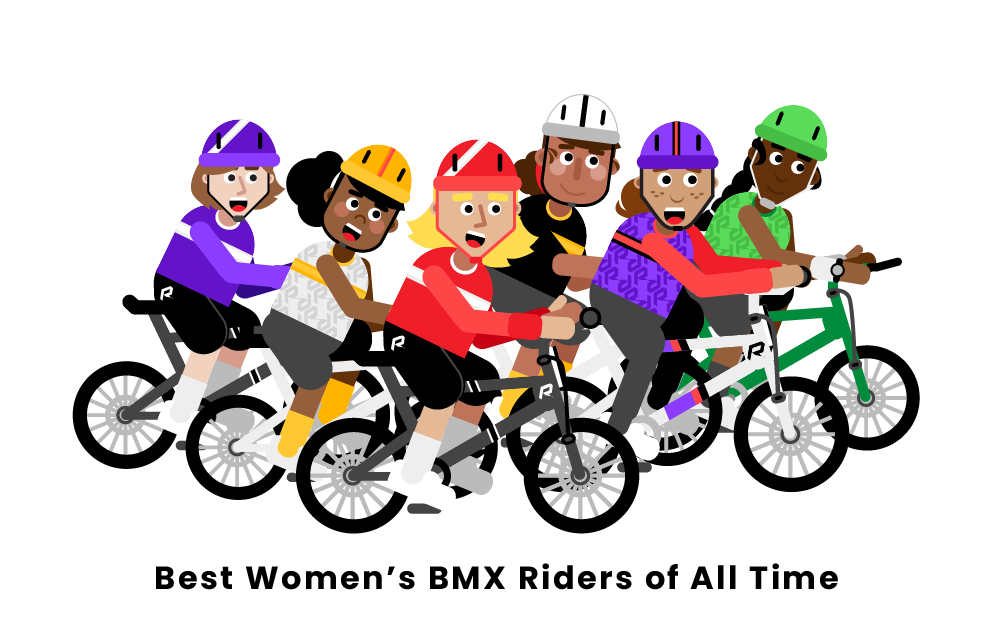 BMX is a relatively new cycling sport that was invented during the early 1970s. It is an intense sport that requires a high degree of skill to navigate obstacles at high speeds during races. BMX was only introduced to the Olympics in 2008; however, women have competed in the sport for years before that. Keep reading to learn about the best women’s BMX riders of all time.

Who are the best women’s BMX riders of all time?

Mariana Pajón, also commonly referred to as “The Queen of BMX,” is one of the most highly regarded BMX riders in the sport’s history. The Colombian athlete is the first from her country to win two Olympic gold medals and the female to earn the most Olympic medals in the sport. She has also won six World Championships. Pajón started riding when she was just four years old, and at nine years old, she won her first competition against all-male athletes. Even as a junior, she consistently won titles as an athlete. Her exceptional career allowed her to have a BMX Supercross Complex in her hometown of Medellin be named after her.

Gabriela Díaz is a skilled Argentine BMX cyclist. She is most known for her incredible feat of earning five UCI BMX World Championship medals: three gold, one silver, and one bronze. She has won many competitions throughout her career and is commonly referred to as one of the most decorated female BMX athletes. She used to hold the Guinness World Record for most UCI BMX World Championships won by a female athlete. At the 2007 Pan American Games, Díaz was the first Argentine athlete to win a gold in the women’s BMX competitions.

Reade is a British BMX racer and track cyclist. Throughout her athletic career, she has won five UCI BMX World Championships in the elite women category and has also won two gold medals in the UCI Track Cycling World Championships. Reade began racing at ten years old, and at just 17 years old, she raced in the men’s National BMX series. In 2016, she set a new Guinness World Record for being the fastest person ever to ride a bicycle around a “wall of death” - a barrel-shaped cylinder made of wooden planks.

Sarah Walker is an Olympic BMX rider from New Zealand. She won a silver medal at the 2012 Summer Olympic Games and wanted to compete again in 2016. However, due to an injury, she was unable to compete and served on the International Olympic Committee Athlete’s Commission. Although Walker has suffered many injuries during her career, including a serious head injury in 2014, she was able to win nine UCI World Championship medals between 2008 to 2015. Outside of her World Championship medals and successful athletic career, Walker has served on multiple IOC committees and is a member of the UCI BMX Commission. She was also selected to be a New Zealand Olympic Ambassador.

At just five years old, Natarsha Williams began her BMX racing career. She is a talented Australian BMX rider who has won several junior and professional titles. She was a part of the Australian team that competed in the first UCI World Championships and became the first to receive the UCI Elite Women's Rainbow Jersey. After winning multiple World Cup titles, she moved to America to become a full-time BMX rider. She won the Female Australian Cyclist of the Year award and was well known for her BMX jumping skills.

Willy Kanis is a Dutch professional BMX cyclist. She began racing because her brother also participated in the sport. Her primary focus is cycling, and she has placed in championships in the team sprint, individual sprint, and the Keirin disciplines. In 2012, Yvonne Hijgennar and Hansis created a national record in the Netherlands on the cycling track in the team sprint event. Kanis’ professional athletic career spanned from 2003 to 2012. Outside of BMX racing, Kanis has also raced on the bobsled. In fact, she nearly qualified for the 2014 Sochi Winter Olympics.

Who is the best women’s BMX rider of all time?

Mariana Pajón is the best women’s BMX rider of all time. She has earned the most Olympic medals out of any female BMX rider, with three. Her success in representing Colombia at the Olympics led to a BMX complex being named after her in her hometown. She is currently the only Colombian athlete to win two Olympic medals. Pajón has also won ten World Championship medals, as well as Pan American Games and Supercross World Cup titles.

What women’s BMX rider has earned the most Olympic gold medals?

Mariana Pajón is the women’s BMX rider that has earned the most Olympic gold medals with a total of two gold medals. Since BMX was only introduced to the Olympics in 2008, there have only been four opportunities to receive a gold medal in the event thus far. In the 2012 London and 2016 Rio Olympic Games, Pajón won consecutive gold medals in BMX riding. Most recently, Pajón competed in the Tokyo 2020 Summer Olympics and won a silver medal. She also was Colombia’s flag-bearer during the 2012 Olympics.