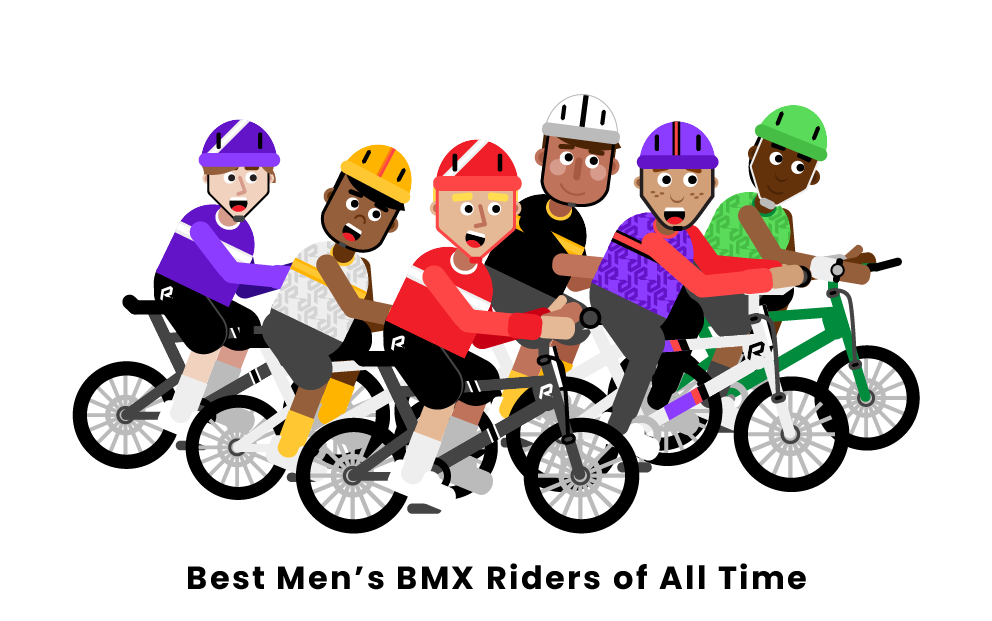 BMX is an intense, high-energy cycling sport. It is a relatively new sport founded in the 1960s and 1970s. In 1981, the International BMX Federation was founded, setting the stage for international competition. In 2008, the sport was added to the Summer Olympics. As the sport continues to evolve, certain BMX Riders have distinguished themselves as some of the best ever. Read more to learn about the top six best men’s BMX riders of all time.

Who are the best men’s BMX riders of all time?

Mat Hoffman, commonly referred to as “The Condor,” is considered one of the best vertical ramp riders in the history of BMX. Throughout his athletic career, he has invented more than 100 tricks. He is also credited with being the first rider to complete a variety of moves, including a double peg grind down a handrail. At only 15 years old, he became one of the youngest riders to join the BMX freestyle circuit when he was hired to ride for Haro Bikes. In 1991, Hoffman began competing in the pro division, which is when he launched new competitions for BMX riders to compete in. Currently, he runs the brand Hoffman BMX bikes and is the president of the International BMX Freestyle Federation, the governing body for international BMX Freestyle events.

Ryan Nyquist is known as one of the most skilled BMX riders and has had incredible performances in BMX competitions throughout his athletic career. Nyquist holds the record for the most Dew Tour Final appearances, with his total of 60 starts. He also was awarded the BMX Plus Dirt Jumper of the Year Award in 2004. He has been competing professionally in the sport for over 25 years, which is a significantly longer time compared to other BMX athletes. In fact, he began riding when he was three years old. Nyquist is known for doing barspin variations that require a high level of technical precision. He has also recently begun training for mountain biking.

Garett Reynolds is an extremely accomplished BMX rider. At just 13 years old, Reynolds began entering professional competitions, and at 15, started to succeed immensely at the Dew Tour and X Games. He’s known for his effortless biking style and ability to perform highly technical tricks, especially in the BMX street discipline. Furthermore, Reynolds has earned a place on the podium at every X Games BMX Street contest, which further illustrates his success. He also holds the world record for the most gold medals won in the BMX Street discipline at the X Games, with 14. He now has his own bike company, called Fiend.

Dave Mirra was an accomplished BMX rider, particularly in the X Games. He began competing at 13 years old when he joined the Haro Bikes team. He also participated in rallycross automobile racing. Sadly, he committed suicide in 2016. Scientists think his Chronic Traumatic Encephalopathy from head injuries may have contributed to his death. Years after his death, he is still highly regarded in the sport. Mirra held the record for most X Games medals in history for a period of time. In fact, since the X Games began in 1995, Mirra won a medal at every X Games except one from 1995 to 2009.

At just 11 years old, Mike Aitken began riding BMX competitively. He is well regarded for his smooth technique on the bike and his ability to gain high air on his jumps. He has excelled in BMX dirt competitions, including the Dew Tour. He has also participated in the X Games and was awarded the number one Dirt Jumper at the NORA Cup. In 2008, Aitken suffered a severe head injury while riding with friends. He has since recovered from the injury and continues to do promotional work in the realm of BMX riding.

Daniel Dhers is a famous Venezuelan BMX rider known for his success in the X Games and Dew Action Sports Tour. Despite his late beginning (compared to other BMX riders on this list) to competing professionally when he was 18 years old, he has participated in several international BMX competitions. In fact, he was the first-ever FISE World Series Champion and won a silver medal at the Tokyo 2020 Olympics. Outside of his career, he is known for mentoring younger BMX riders. In 2013, he also opened a public skateboarding and BMX park in North Carolina.

Who is the best men’s BMX rider of all time?

Mat Hoffman is the best men’s BMX rider of all time. He has accumulated six X Games medals during his athletic career and has had a lasting impact on the history of the sport. Hoffman utilized his expertise in BMX riding to found the X Games, creating a space for BMX riders to compete on an international level. Hoffman was also the first person to ride an oversized ramp, and has been inducted into the Oklahoma Sports Hall of Fame.

What men’s BMX rider has won the most X Games gold medals?

Dave Mirra, Jamie Bestwick, and Garrett Reynolds all currently hold the world record for the most gold medals earned in the X Games. All three BMX riders have won a total of 14 gold medals each. Even more impressive, Dave Mirra achieved this feat in only nine years. The only other summer X Games competitor that has won 14 gold medals is Bob Burnquist, who competed in skateboarding events from 2000 to 2015.

Kyle Bennett, an American BMX rider, holds the record for the most gold medals at the UCI BMX World Championships. Bennet has won three gold medals in his career. He won one in 2002 at Sao Paulo, Brazil, one in Perth, Australia, and one in Victoria, Canada. Bennet was on the 2008 USA Olympic BMX team and was also a prominent cyclist. Sadly, he died in an accident in 2012.