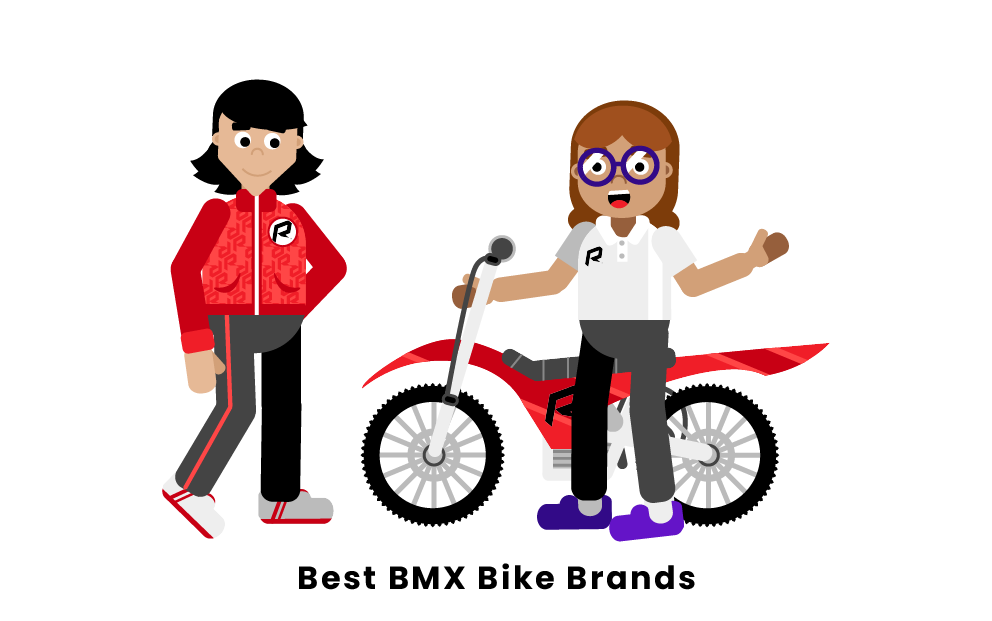 BMX bikes are a popular way for kids to get around and have fun outside, but plenty of adults love them too. Descended from bikes used in all-terrain dirt racing, BMX bikes are as popular as ever now that the trick-oriented freestyle BMX discipline has dominated the sport. Here are some of the top BMX bike brands today, ranging from basic bargains to top-level rides for the pros.

What are the most popular BMX bike brands?

Haro Bikes is a BMX and mountain bike brand based in Torrance, CA. Bob Haro founded the company in 1978 as Haro Designs, manufacturing number plates for BMX racing. Haro expanded and began designing bikes, selling their first complete BMX bike in 1983. Bob Haro was an elite BMX rider and his displays of groundbreaking tricks in competitions, as well as his innovative frame designs, helped lay the groundwork of freestyle BMX as a sport. Today, Haro sells BMX bikes, mountain bikes, commuters, e-bikes, and children’s bikes, as well as road bikes under the brand Masi and cruisers branded as Del Sol. They also produce an upscale sub-brand of BMX bikes, parts, and accessories called Premium Products. Over the years, Haro has sponsored some of the most successful freestyle BMX riders in the sport, including Ryan Nyquist, Dave Mirra, Dennis McCoy, Eddie Fiola, Matt Hoffman, Donovan Ritter, Marc McGlynn, R.L. Osborn, Mike Dominguez, ​​Bob Morales, and Rich Sigur.

Eastern Bikes is a boutique BMX bike brand operating out of Raleigh and Charlotte, North Carolina. The company was started in 1996 by BMX riders Jon Byers and Mike Corley. They still own the brand today, and most of the employees continue to be BMX riders themselves. Eastern is known for innovations in freestyle BMX bikes, such as the frame cutouts used in their lightweight titanium Grim Reaper frame, numerous advances in hub design and construction, and the use of plastic hub guards for protection when grinding. Today, Eastern sells a range of BMX bikes, frames, and parts, as well as hardtail mountain bike models and cruisers. Eastern sponsors a factory BMX racing team, a freestyle team, and a factory test team. Sponsored Eastern BMX riders include racers Adam Banton, Kelly Bolton, Craig Mast, Daniel Donges, and Brian Wizmerski, as well as freestyle riders Cody Jennings, Seamus McKeon, Nick Anderson, Josh Perry, Darren Bouldin, Kenneth Tencio, Luke Padelski, Josh Roberson, Zach Kring, Tommy Myall, Russell Summerville, and Robbie Taylor.

Elite BMX Company is an American BMX bike brand. In operation since 2016, Elite BMX is based in South El Monte, California. The brand is known for its affordable entry-level BMX bikes, such as the Stealth model. Elite BMX only sells steel frame bicycles, with manufacturing duties handled by ISD Distribution. In addition to entry-level bikes, Elite BMX also offers higher-end BMX bikes that offer exceptional value for their performance and component specifications. According to online user and expert reviews, Elite BMX bikes are a great option for children who want to get into the sport, especially the Stealth. Some outlets crown the Stealth as the best cheap BMX bike option on the market. This full range of BMX bikes is complemented by a rigid frame cruiser, as well as Elite BMX-branded parts and clothing. The brand sponsors a freestyle BMX team. Elite BMX-sponsored riders include factory team members, Ryan Guettler and Justin Pursley.

Kink BMX Company is a BMX bike brand based in Rochester, New York. Kink BMX was started in 1994 by Zack Phillips, at the time only 16 years old, as a small business fabricating and selling freestyle BMX components to riders. Today, Kink sells several models of professional-grade BMX bikes in a variety of frame and wheel sizes, as well as a full line of parts, accessories, and clothing. Their range-topping model is the Williams, named after Kink factory team rider Nathan Williams, who helped design the bike to be as close to the one he rides in competition as possible. Kink is a major sponsor of BMX riders all over the globe. They sponsor a professional freestyle BMX factory team, as well as provide sponsorship for an international team and an amateur team. Some of the pro freestyle riders sponsored by Kink are Casey Starling, Jacob Cable, Calvin Kosovich, Hobie Doan, Dan Collier, Travis Hughes, and Nathan Williams.

Sunday Bikes is a Norwalk, California-based BMX bike brand known for their brightly-colored bikes and innovative frame designs. Sunday’s flagship bike is the Soundwave Special, and it is one of the highest-quality, best-specified, and most expensive complete BMX bikes on the market. Also at the top of Sunday’s range is the Broc Raiford Darkwave Authentic, which is an exact replica of factory team rider Broc Raiford’s personal competition bike, including left-hand drive and all aftermarket components. Sunday was founded in 2005 when they began selling forks and handlebars made with a groundbreaking heat-treatment process. This was followed up the next year by their now-iconic Sunday frame, the first in the industry to feature hollow dropouts. Sunday is an enormous supporter of freestyle BMX riders, sponsoring a professional factory team, an amateur team, and an international team. Some riders sponsored by Sunday include Maca Perez Grasset, Jake Seeley, Julian Arteaga, Erik Elstran, Brett Silva, and Broc Raiford.