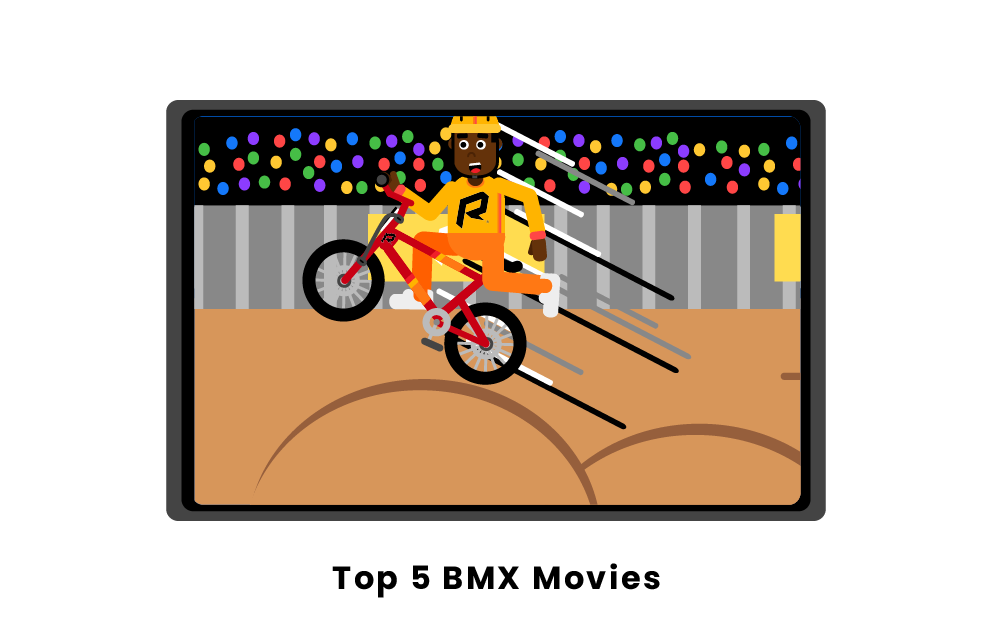 What are the most popular Bmx movies?

This documentary, part of ESPN’s 30 for 30 series, focuses on the rise and subsequent fall of the popularity of BMX since the 1980s. The film follows BMX pioneer Mat Hoffman as he details his impact and the evolution of BMX. This sport has a history filled with risk and adrenaline, and Hoffman’s ambition highlights the integrity of the athletes. In an attempt to grow the sport and bring it into the mainstream, Hoffman took some of the biggest risks in any sport, and it paid off at times.

The Birth of Big Air has a number of name-brand movie people contributing to this ode to BMX. The director, Jeff Tremaine, directed most of the Jackass movies, bringing the absurdity of the extreme to ESPN. Speaking of Jackass, legendary risk-taker Johnny Knoxville has a producer credit. Also, renowned film and music video artist Spike Jonze also fields a producer credit. These names show the depth and care put into this amazing BMX film

Rad is a movie that was misunderstood from the start, but eventually, found the love of fans from around the world. Rad had humble beginnings as an insanely ‘80s film in the best way possible with its lighting and outfits, but it only grossed $2 million in theatres. The people who did see Rad loved it and made it known. On the popular critical website Rotten Tomatoes, Rad has one of the biggest discrepancies between critic score and user score, which both average the ratings of each entity, with a critic score of 29 percent and a user rating of 90 percent. These numbers show how audiences have related to the movie since BMX has flourished in semi-mainstream culture.

The plot plays to the counterculture themes of BMX and extreme sports in general. During the film, the protagonist, Cru Jones, rides with his friends and does odd jobs to pass the time before he gets a chance to race at “Helltrack,” an important BMX race. Jones disregards his SAT test and wants to make his mark on the BMX scene. This movie shows the community that comes from BMX racing and previewed the popularity the sport would eventually gain.

BMX in Nigeria is a perfect documentary for either long-time BMX fans or people who are new to the sport. The film delves into the up-and-coming BMX scene in Nigeria. Three of the major players in this country are followed, Starboy, KK Money, and S-King, and they take the viewer on a tour of one of the most unique places to bike. The tricks performed are impressive and show the way this new BMX community is innovating the sport.

This movie succeeds because of the balance between BMX clips and establishing shots of the setting. The way the movie is shot and edited is beautiful and really takes the viewer through the streets of Nigeria. While it is in theory a BMX documentary, there is ample social commentary and emotion throughout the film. Even those who are not familiar with BMX can watch this documentary and enjoy it, a testament to the filmmakers’ skills and voice.

4. Joe Kid on a Stingray

Joe Kid on a Stingray is one of the definitive pieces of art to outline the history of the BMX sport. This documentary starts from the humble beginnings of the sports by going back to when teenagers messed with their bikes enough to produce an adrenaline pumping but dangerous sport that they did not know would take the world by storm in a few decades. This evolution from the classic Schwinn Sting-Ray bike to a phenomenon that found the sport featured everywhere from Sports Illustrated to ESPN’s X Games.

Even the music fits the aura of the BMX community. The music comes from Hellcat Records, a label known for signing various types of punk and other genres out of the mainstream. The film does not shy away from the dangers and shortcomings of the sport, especially in its early days, but rather uses them to show the growth and community that came out of a few kids wanting to make their bikes into motorcycles.

This post-apocalyptic action-adventure film that plays to the sentiment of movies like Rad and Mad Max at the same time has become an underground joy for both BMX and non-BMX fans alike. The setting is the “Wastelands” on Earth in 1997 in a world void of water and run by a tyrant, Zeus. The protagonist, a comic book and BMX loving boy called “The Kid,” must make decisions that decide the fate of his community. After selling his bike for comic books and water, he decides to take the persona of his hero, Turbo Rider, after finding his armor.

This movie is important in BMX circles because of its absurd yet heartfelt tone. With its group of villains, superheroes, and cowboys sprinkled throughout the story, the heroes are interesting and loveable. “Turbo Kid” shows that even in a post-apocalyptic wasteland with enough dirt hills and terrain to make any BMX-junkie joyous, some things are bigger than sports.