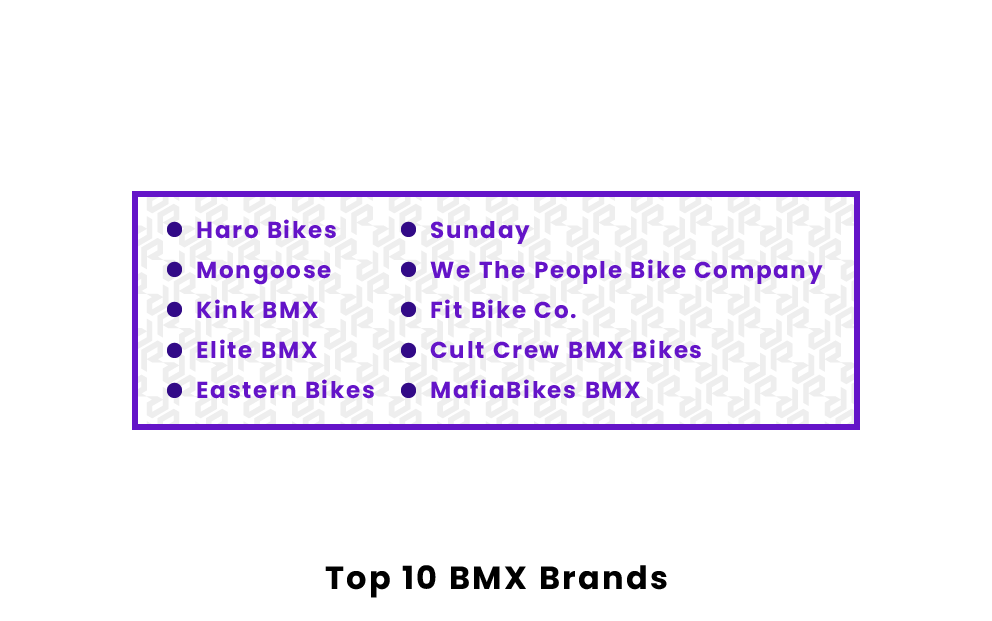 What are the most popular BMX brands?

Haro Bikes is easily one of the most popular brands within the BMX industry, specializing in bikes for all styles and ages. The company started in 1978 when Bob Haro, a Californian surfer, skater, and biker, started designing BMX number plates in his garage. In 1981, Bob Haro made the switch from an accessory-based company to designing bikes and bike frames. To this day, Haro Bikes manufactures BMX bikes, racing bikes, frames, and kids bikes for people all over the world. A basic Haro beginner bike will typically cost around $350, while a more advanced BMX rider would pay around $750. Haro also offers “legendary” bikes, incorporating old styles from the 1980s which can cost up to $1,100. Haro sponsors both BMX style professionals and racers, including:

Haro Bikes is one of the oldest companies on the market, yet they still continue to revolutionize the BMX industry to this day.

Mongoose Bicycles is another leader in BMX brands, selling bikes, apparel, and even scooters. The company started in 1974 when Skip Hess first developed one of the strongest wheels on the market, since it was made out of magnesium alloy. Just a year later in 1975, Skip released the first model of Mongoose BMX bikes. Unlike other companies at the time, Mongoose frames could support bikers driving faster and jumping higher.

Mongoose is known internationally for its high presence in BMX sports. Not only were they the exclusive bike sponsor for the Mountain Dew Action Sports Tour, but they also began hosting their own sports contests in 2012 called the Mongoose Jam. Mongoose has some very reputable names on their team, including:

Although their bikes are priced higher compared to other brands in the industry, Mongoose Bikes has grown to be a recognizable brand all over the world.

Kink BMX is a smaller company based out of Rochester, New York that focuses on top-notch, professional BMX bikes. Their bikes are known to be built with the strongest and lightest materials in the industry, while also maintaining a very sleek look that the riders enjoy. Kink BMX was founded in 1998, however their first fully complete bike was not released until 2007. The high end bikes, such as the Williams model which is based off of professional BMX rider Nathan Williams, can cost anywhere up to $800. Other riders that represent the Kink BMX brand include:

Kink BMX also has a selection of bikes for beginner BMX riders, which are all typically under $300. The brand also sells a collection of clothing apparel, branded merch, and even featured videos created by Kink Media and their sponsored riders. Although their company is fairly new to the industry and only sold in the United State, Kink BMX has still made itself a reputable brand within the BMX industry.

Elite BMX is another very reliable brand within the industry, creating affordable and long-lasting BMX bikes. Although the company is very new, they quickly earned a great reputation from competitive riders. Elite BMX offers many different bike lines, including the CMNDR, DESTRO, and STEALTH bikes. Each bike has a unique build, giving riders the option to choose which suits them best. Each bike line ranges in price, with the STEALTH bikes costing around $250 and the CMNDR bikes around $450.

Elite BMX is also unique in their children’s bicycles, offering professional freestyle bikes for younger riders who want to compete. They offer two different wheel sizes, so those who’ve never ridden a bike and those with experience both have options.  Since the company is less than 5 years old, they do not currently sponsor any professional riders. For lower prices compared to other companies, Elite BMX is a rising company in the industry offering very light and durable bikes.

Eastern Bikes is known to be one of the greatest manufacturers for all types of bikes within the BMX industry. When the company was created in 1996 by Keith King, Jon Byers, and Mike Corley, the only goal in mind was to build the most durable frame possible. After experimenting for almost 10 years, Eastern Bikes finally released the Grim Reaper frame, which was the most innovative and durable frame on the market. Eastern Bikes offers a variety of different makes and models, with the prices typically hovering around $500 each. Eastern Bikes sponsors many different BMX and trail riders, including:

Although Eastern Bikes has a wonderful bike line for freestyle BMX riding, the company also offers many downhill mountain bikes. Eastern’s ability to offer all types of bikes all over the world is what makes them one of the greatest brands on the market.

Sunday Bikes is a leader in the bike frame area of Bmx, creating lightweight and durable frames since 2005. Sunday Bikes work with bike dealers from all over the world, and they actually offer their bikes in all 7 continents. When their company started, they were quickly known for their innovative designs and talented rider team, including:

Sunday Bikes is unique in their ability to sell all of the individual parts of a bike, from pedals to brakes. Riders who work on their own bikes tend to be frequent buyers of their products, since they understand the mechanics of their own bike. Sunday Bikes is one of the greatest brands because they have built a strong presence nationally within the industry by offering bikes for every type of biking activity, including downhill, BMX, racing, and leisure.

7. We The People Bike Company

We The People was founded in Germany by Klaus Dyba and Harry Schmitt in 1996. When the company was formed, Klaus and Harry wanted to focus on two values: functionality and quality. To this day, they continue to make some of the strongest and most precise-handling bikes on the market.

The We The People Bike Company team consists of world renowned competitive BMX bikers, including:

We The People is very active in social media promotion, using Instagram and a company blog to keep their followers informed about updates. While they do offer full BMX freestyle set ups, they also offer individual parts. We The People release different series of bikes, each containing 4-6 bike models. These series can range from beginner bikes in the icon series to top of the line professional models in the elite series. We The People is a very trusted brand for BMX riders and they continue to release high quality bikes over time.

Fit Bike Co. was founded in 1999 by an already established company, S&M Bikes, in Santa Ana California. In the early 2000s, Fit Bike Co. quickly assembled an all star biking team consisting of professionals riders such as:

Fit Bike Co. offers a wide variety of bikes, from both mountain bikes to professional BMX rides. The typical price of a Fit Bike Co. bike ranges around $450 for their newly released 2021 models.

In 2010, Fit Trippin’ Volume 1 was released, which was their first biker film with all their sponsored professionals. Since then, Fit Bike Co. has released numerous short movies about the BMX sport. Since 1999, they have emerged in the industry as a very reliable brand for manufacturing quality BMX bikes all over the world.

Cult Crew BMX is a brand new company to manufacture BMX bikes, however, in the past decade alone they have shown their ability to ramp up production within the industry. In 2010, professional rider Robbie Morales left S&M bikes with his team of riders to start Cult. Within the first year, they had bicycle models in production and were even working on their first team video.

Since 2010, Cult has released numerous bike models for professional BMX riders, as well as even a bike ramp called a ‘Cult Kicker.’ Robbie Morales says that the team of riders also helps build the business, from video production to market. His team consists of BMX stars such as:

Morales split from his old company S&M because he wanted to return to his roots of quality bike components. Rather than using large manufacturing facilities, he built Cult so that his team of friends could make hand-made, quality bikes.

MafiaBikes was established in 2009 by a team of bike enthusiasts and professional riders who wanted to create affordable, durable bikes. With their motto being, ‘kids on bikes,’ MafiaBikes aims to manufacture BMX bikes for those just starting out or with a little bit of experience. However, they do offer a small collection of more advanced freestyle bikes. Their team of professional riders consists of:

MafiaBikes is unique in their different bike types, offering freestyle BMX bikes, large bikes, mountain bikes, street bikes, jump bikes, and mini bikes. Even though they are a fairly new company, MafiaBikes has made a significant impact on the bike culture through their innovative and creative designs.

What are the best BMX brands?

The best BMX brands are those who consecutively create durable, light-weight bikes and use a strong team of professional riders to promote their brand. Riders are always looking for the best possible ride and build from a bike. The best BMX brands include Haro Bikes, Mongoose, Kink BMX, Elite BMX, and Eastern Bikes. They have all made a long-lasting impact on the bike design, efficiency, and sport.

What is the best BMX bike?

The best BMX is the Mongoose Legion Freestyle BMX bike because it is a perfect mix between a beginner bike and professional ride. The aluminium U-brake makes it really easy to maneuver around while you are riding it.  They are also very sturdy, so riders won’t have to worry about the bike breaking down while riding it. Mongoose is a very reputable company with bikes that have built brand loyalty for over 30 years.

Who makes the best BMX frame?

Eastern Bikes is known within the industry to create the most durable frames for riders. The better the frame is, the more impact it can withstand from faster speeds and higher jumps. The best BMX frame that Eastern Bikes created was the Grim Reaper frame, due to the innovative design of it. Riders will typically purchase an Eastern Bikes frame and equip it with parts from other companies, since the frame is so reliable.

Is Elite a good BMX brand?

Elite BMX is a great brand that hasn’t been around for too long, yet still continue to make positive contributions to the BMX world. Their company offers many different builds, depending on the bikers style of riding. Elite also has a large collection of children’s freestyle bikes, so it is a great company to buy from if you are just getting into BMX biking. Although Elite doesn’t sponsor anyone currently, they are actively seeking professional riders to represent their brand.