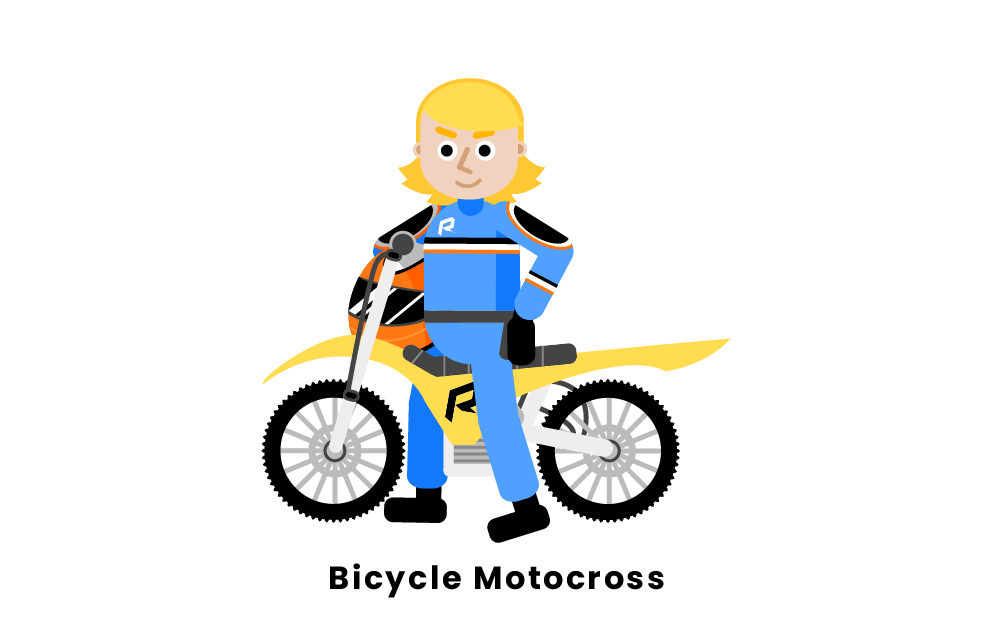 Bicycle Motocross, "BMX" has been a popular sport around the world as early as the 1970s, originating in Southern California. It was created as an inexpensive alternative way of motocross. The first glance of a BMX bike is similar to a regular bicycle, however, its lightweight design makes it possible to do an infinite amount of tricks. These tricks are often performed in front of large audiences. BMX Cycling was chosen to be a part of the 2016 Summer Olympic Games in Rio de Janeiro, Brazil. It was also chosen to be a part of the 2020 Olympic Games in Tokyo, Japan. BMX is a vastly popular sport with many diverse options for casual use or competitive play.

The sport of BMX materialized when young kids in the early 1970s were trying to imitate their favorite motorcycle racers. This type of imitation led to innovating a completely new sport. It involved "getting air" and performing jaw-dropping tricks. At first, the sport was called "Pedal-cross," but it eventually became known as Bicycle Motocross (BMX). By 1977, many BMX races were formed across the country, stretching to the east coast. Since these events were loosely organized, an organized structure was needed. In response, the American Bicycle Association (ABA) was created for that purpose.

The makeup of a BMX bike is almost a cross between a regular bicycle and a mountain bike. This is due to the fact that BMX's have stronger springs and tires like a mountain bike. Also, the lightweight structure of a BMX bike makes it possible to race at high speeds, compared to its other bicycle counterparts. This makes it very versatile when performing. These stunts can be performed in somewhere as simple as the local skate park or in rugged, dirt terrains. The high-speed, non-stop action is also very entertaining for crowds to watch and keeps them on their toes when watching a performance.

Competitive BMX riding is performed on the highest stage of competition, the Olympics. The basic format for BMX racing includes eight riders that are released from a gate. Those riders race around a track in a one-lap, winner-takes all competition. In larger BMX events, the competition is separated into three phases: the time trials, the qualifiers, and the final. In the 'time trial' heat, riders compete individually against the clock to decide what seeding that rider will have for the qualifiers. The qualification process consists of multiple races, however, only the top four racers will advance. This system will continue until there are eight competitors left for the final race.

What does "BMX" stand for?

BMX stands for "Bicycle Moto Cross." The abbreviation itself stands for a smaller, lightweight bike. These bikes are able to withstand much more rigorous riding.

What is the best BMX brand for overall use?

Haro Bikes are often considered the best brand for BMX bikes. Haro has been around since 1978 and has many types of bikes, frames, and parts. This brand, like most others, sells freestyling and racing bikes. Haro also sells apparel, such as hats and t-shirts, on their website. The bikes are sold for as low as $300 and the most expensive bike is $1,200. Haro also sells bikes for kids and apparel to go along with it.

Are there classes for BMX beginners?

BMX classes are separated into groups based on age and gender. Boys will always be in a class with boys. Girls will have that same rule, but if there aren't enough girls to fill a class, they will be put in the boys class. Riders can learn how to use a BMX as early as toddler age. Toddlers usually use balance bikes when learning.

What are some good BMX bikes?

A lot of BMX bikes are designed for any level of rider, however some brands are directed towards different audiences. For beginner BMX riders, the Mongoose Legion L20 is a great starter bike! It's priced very affordably at $200 USD and is extremely lightweight. Another cheaper option is the Eastern Cobra. It's a very good starter bike like the L20, however the components are much higher quality. This means that the bike will last much longer than its competitors. The Sunday Street Sweeper Pro BMX Bike is based upon a Jake Seeley signature frame. Seeley is very accomplished within the BMX industry. What make his signature special are the freecoasters that are some of highest quality on the market. Often when a BMX rider gets very experienced, that rider will want to build their own bike to their own specifications.