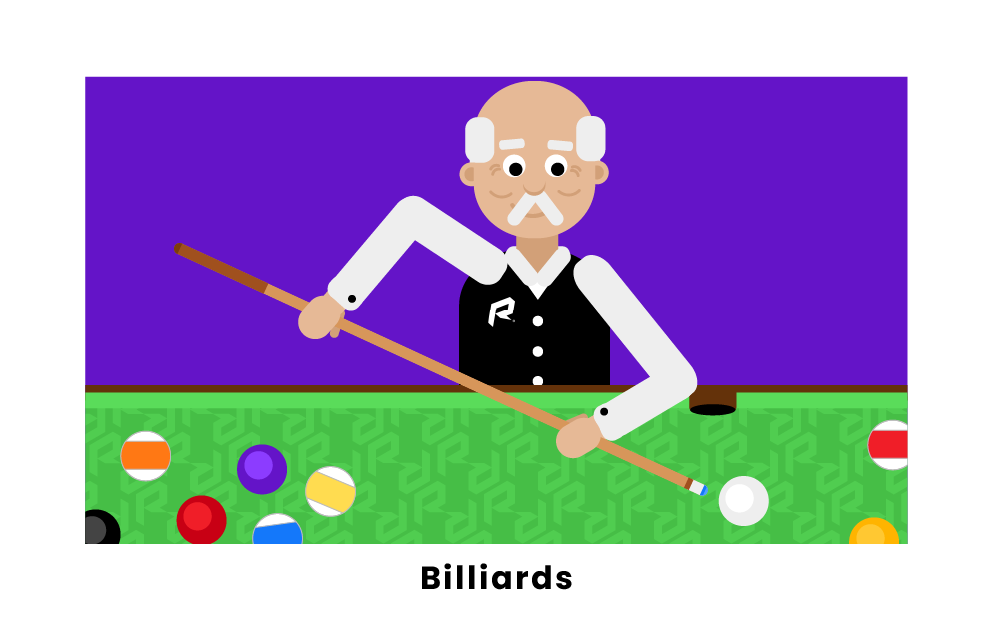 Billiards, also known as pool, is a game played in both casual and competitive settings. There are sets of solid and striped balls, and the game is played with a long stick. The goal is to get your assigned set of balls into the pockets located on the table, followed by the black 8-ball at the end. There are many variations of billiards as well as competitions for trick shots.

Billiards has a long and rich history stemming from a lawn game similar to croquet in the 15th century. The green surface of the pool table is meant to emulate grass, since the game was brought indoors. The game was left to simply the pool balls and the pockets of the table by the time it reached the 18th century. The first billiards rule book was published in 1675. Modern 8-ball pool was invented around 1900. 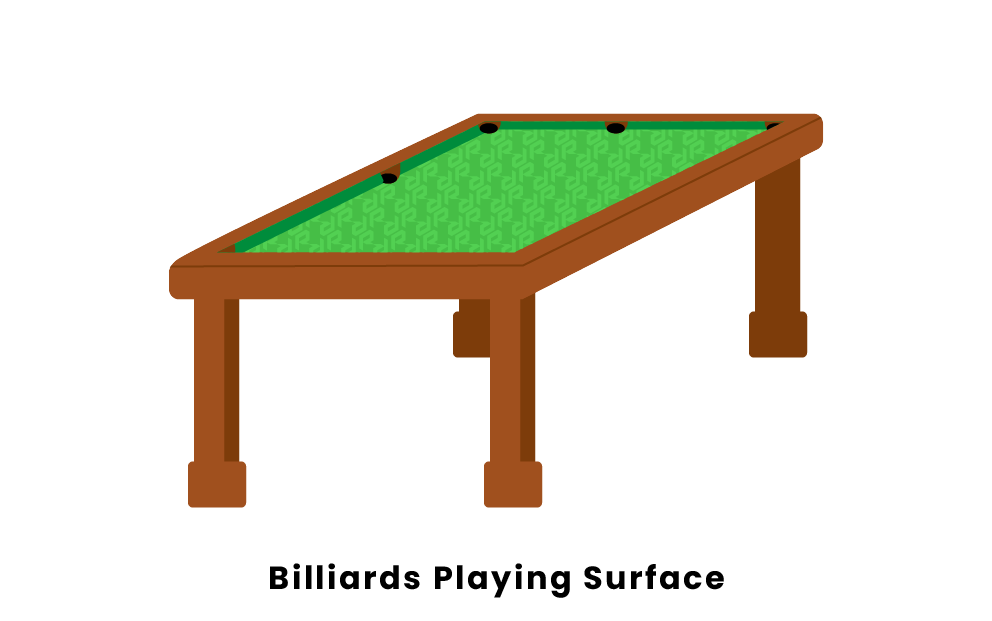 A pool table is typically made out of wood and has six pockets around it. The green felt surface is meant to replicate grass as the game of billiards was derived from a lawn game. The pockets are deep enough to hold multiple balls, and the opening is just big enough for a ball to pass through. The surface is relatively hard on the edges so gauging power is important. 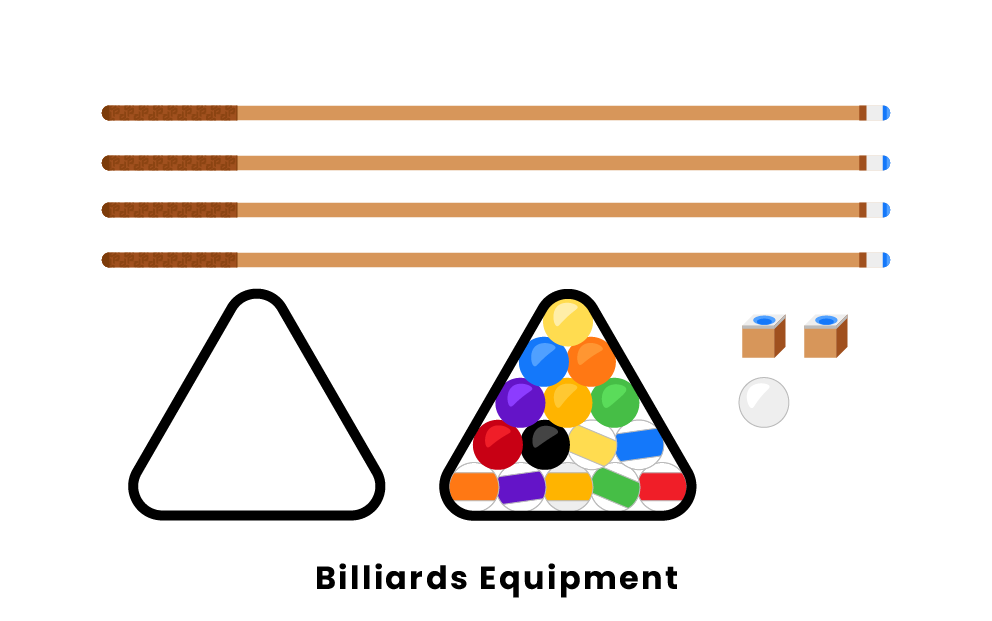 While billiards is fairly simple, there is still equipment you should have in order to improve your game. Beyond the cue sticks and pool balls come things like chalk, gloves and other accessories. The list below will show you the most important pieces of equipment you need before playing a billiards game.

Here is the essential Billiards equipment you should have:

The goal of billiards is to score more points than your opponent. This is done by sinking all of your assigned balls into the pockets on the table. You must leave the 8-ball for last, and if you hit it in before then, you lose the game. Billiards is offensive and defensive, as you should calculate your shots so that your opponent’s next shot is difficult. This game is very precision based and there is little room for error. 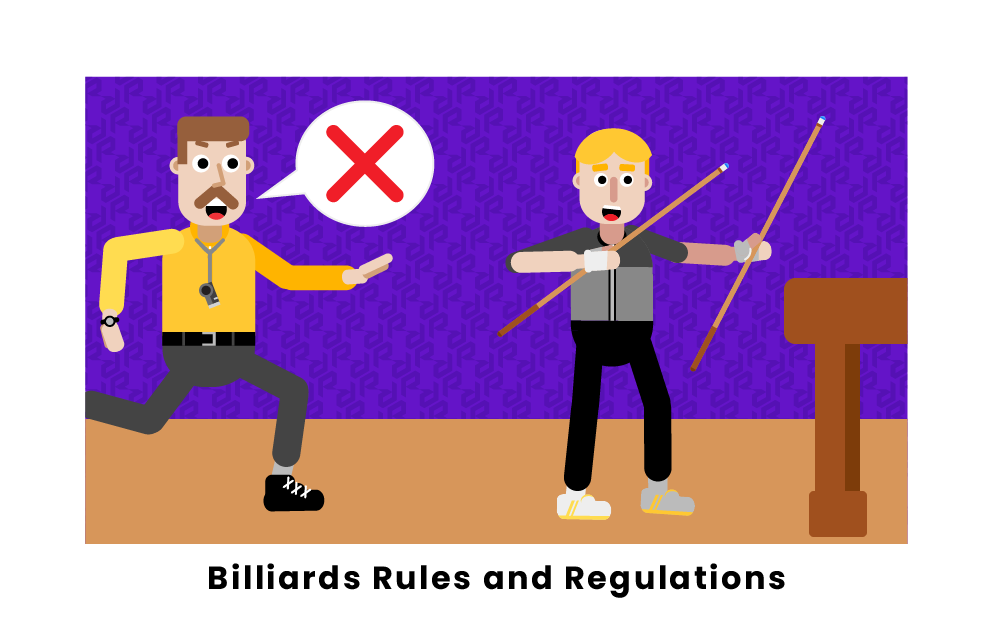 There are some main rules to billiards that are important to know if you are a first time player. The balls are racked at the beginning of each game and one player will break with the cue ball. If a player sinks the cue ball, the opponent can move the cue ball around for his next shot. If a player sinks the 8-ball before the rest of their balls, they lose the game. Players also often call their shots, naming the pocket at which they are aiming.

Here are the most important Billiards rules you should know:

There is a bunch of strategy when it comes to billiards. Most importantly, you want to make sure you hit your shots but also make it hard for your opponent. Sometimes it is better to go for a more difficult shot yourself if it means your opponent will have a tough time as well. Another form of strategy is using the table’s rails to shoot balls to pockets at a weird angle.

Here are the most important Billiards strategies you should know: 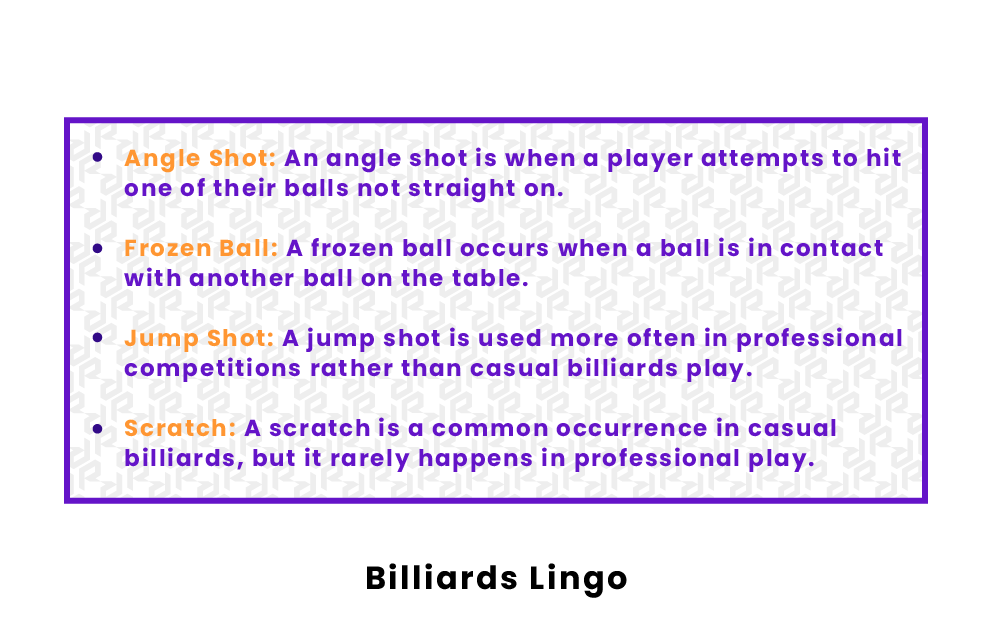 Here is the common lingo and slang in Billiards:

An angle shot is when a player attempts to hit one of their balls not straight on. Angle shots are not easy to successfully complete, but they are rewarding as they often provide good positioning for future shots. The angle shot can also be referred to as a cut shot.

A frozen ball occurs when a ball is in contact with another ball on the table. This is another tough shot to hit because you can also make the other ball go in, which may or may not be good depending on if it is yours or not. Frozen balls often happen early on in the game since there are still a lot of balls left on the table.

A jump shot is used more often in professional competitions rather than casual billiards play. It happens when a player deliberately hits the cue ball into the air in order to reach one of their balls. This is a difficult skill to master and can be disastrous if not done correctly.

A scratch is a common occurrence in casual billiards, but it rarely happens in professional play. It happens when a player sinks the cue ball into a pocket. This results in the opponent being able to move the cue ball before they take their shot, giving them a slight advantage for their turn. 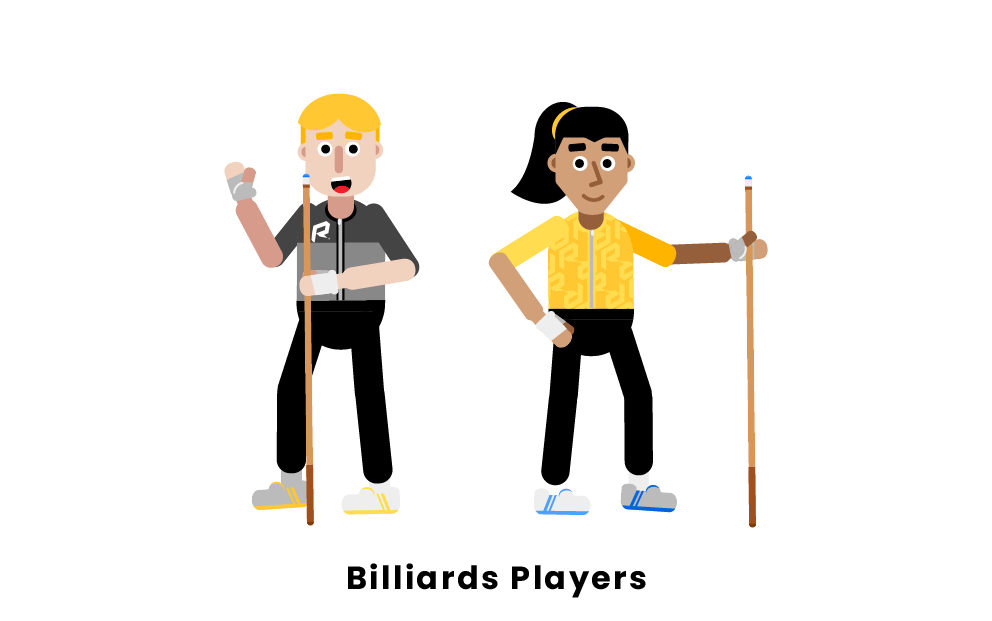 There have been lots of famous billiards players over the years, but the best of the best are known for their precision and successful careers. While most of the well known players are male, some female billiards players have risen to popularity. The list below will showcase some of the most seasoned players that billiards has ever seen.

Here are the most famous Billiards players you should know:

There are 3 main billiards leagues that operate in the United States. There are also Canada members who participate in these leagues, but they are mostly limited to United States competitions. Most of the major events are produced by the BCA Pool League, which is headquartered in Nevada.

Here are the most popular Billiards leagues you should know: 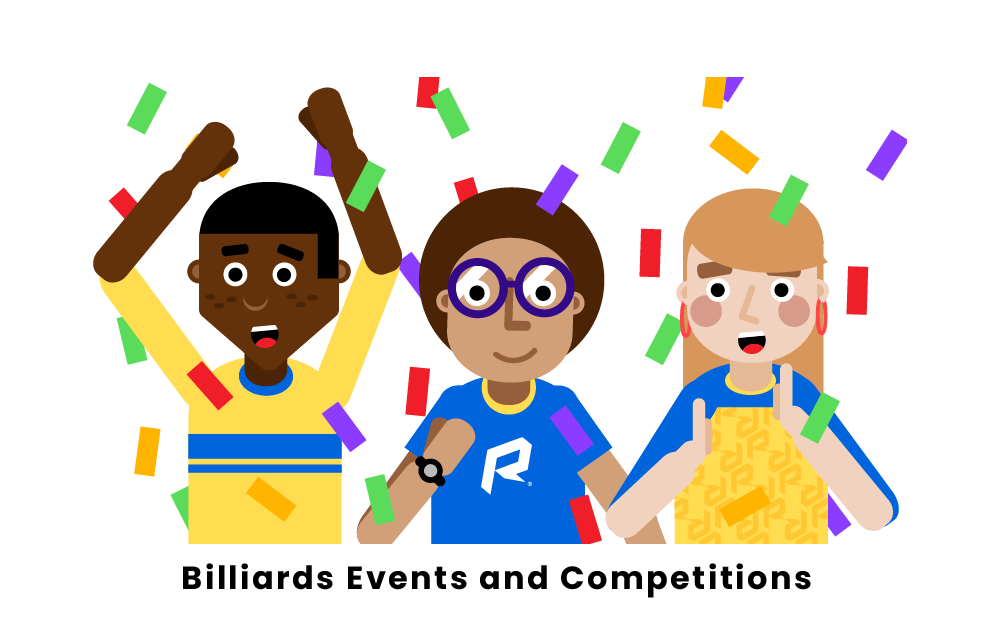 There are many events when it comes to billiards, especially since there are different variations of the game. There are championships for 8-ball, 9-ball, and 10-ball billiards. Unique events like trick shot competitions are also associated with the game of billiards. Normally the events have small crowds and are televised on stations like ESPN.

Here are the most popular tournaments in Billiards:

What is a break?

A break in billiards is when a player hits the cue ball into the formation of balls in order to start the game.

What is a scratch?

A scratch is when a player hits the cue ball into a pocket without hitting anything else or when the cue ball does not make contact with another ball.

How do you use chalk?

You use chalk on your cue stick by rubbing the chalk on the end where you hit the ball. Rub in a circular motion.

How do you win a game of Billiards?

You win a game of billiards by hitting all of your assigned balls into the pockets, followed by the 8-ball.

Pages Related to What is Billiards?