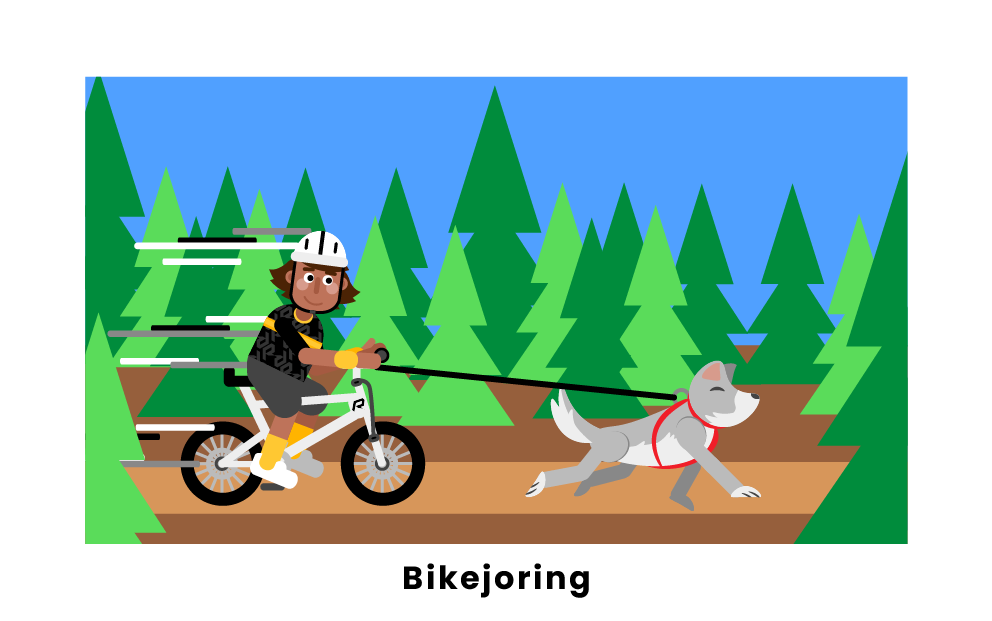 Bikejoring incorporates (mountain) biking and dog pulling all in one sport. In bikejoring, dogs pull their owners along paths and trails attached to a leash alongside or in front of a biker. Originating in Europe, it is a popular way for people to exercise, compete, and have fun with their dogs!

Bikejoring can be considered a form of dogsledding but in dry, non-snowy climates. The sport gets its name from skijoring, which involves dogs pulling skiers. In fact, bikejoring can be used to train out-of-season sled-racing dogs.

Owners and their dogs can compete in various competitions, both domestic and international, timed and direct. These are governed by the International Federation of Sleddog Sports (IFSS) and the International Canicross Federation (ICF). Alternatively, bikejoring can be done for leisure. The most popular dog breeds for bikejoring include Huskies, Pitbulls, and Alaskan Malamutes.

Where are the best places to go bikejoring?

The best places to go bikejoring are relatively flat and stable terrain, namely dirt or grass trails. One should avoid concrete or pavement as they are tough on a dog’s paws and joints.  However, this terrain is suitable for beginners going on short, slow rides. Additionally, one should always go bikejoring in dry conditions to avoid potential crashes. Bikejorers should also plan out their routes carefully in order to avoid the risk of running into distractions or dangerous obstacles.

What equipment do I need to go bikejoring?

To go bikejoring, one needs a bicycle (typically a mountain bike), a bike antenna (bikejoring arm), and a leash/line for their dog. The leash will extend out from the bike antenna, attaching to the dog’s harness. It is important to make sure that the harness worn by any dog during a bikejoring session is both comfortable and allows ample range of motion. A bike helmet, goggles, and gloves are also necessary for the rider. For dogs, one can apply paw wax or dog booties to protect them from rugged terrain.

Pages Related to About Bikejoring