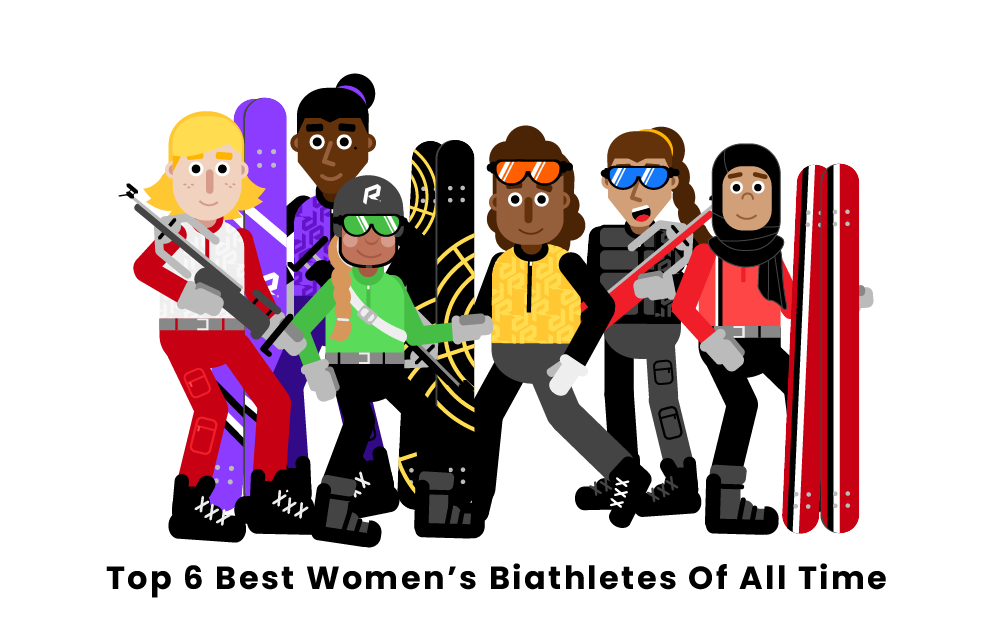 Biathlon is a complex sport as it requires skilled athletic ability and precision in two different sports: cross-country skiing and shooting. In one race, athletes first race around a closed cross-country ski course. As they race, they stop at designated spots to shoot at targets. Biathlon has been an official Winter Olympic sport since 1960. Read more to learn about the top six best female biathletes of all time.

Who are the best women’s biathlon athletes of all time?

Frequently known as “Rotkäppchen,” which is German for “Little Red Riding Hood,” due to her iconic red hair and cap, Kati Wilhelm is one of the most iconic female biathletes. Her seven Olympic medals make her the most decorated female biathlete of all time. Wilhelm competed in four Olympic Games for the German national team during her career. In fact, she became one of the most popular athletes in Germany, as she was frequently featured on magazine covers and in TV shows. Like many other biathlon athletes, she cross-country skied from a young age, then tried out biathlons later in life. After a long, successful career, Wilhlem retired after winning her seventh Olympic medal at the 2010 Vancouver games.

Uschi Disl is one of the most famous and well-decorated female biathletes in the sport’s history. Her athletic career lasted from 1990 to 2006, and during that time, she competed for the German national team in five Olympic Games. She earned at least one medal in the biathlon relay in every Olympics she competed in. Shortly after her Olympic debut, her teammates began calling her “Turbo-Disl,” a nickname well-deserved due to her talent. Disl also had a strong career in the Biathlon World Championship and World Cup, earning 19 world Championship medals and over 100 appearances on the World Cup podium.

Darya Domracheva is a relatively recent and well-known biathlete. From a young age, Domracheva demonstrated her skill in biathlon when she regularly competed and won against boys at the Nyagan Biathlon School. At just 20 years old, she competed in the Biathlon World Cup for the first time. After earning multiple podium finishes that season, she set her sights on becoming an Olympic champion. She made her Olympic debut at the Vancouver 2010 Olympic Games and competed at a total of three Olympic Games for the Belarus national team. In the 2014 - 2015 season, she was ranked the number one biathlete in the world.

Nicknamed “Gold Lena,” Magdalena Neuner is a famous Olympic biathlete. She won two gold medals and one silver medal at the 2010 Vancouver Winter Olympic Games with the German national team. Before competing at the Olympics, she had an impressive biathlon career during which she earned numerous World Championship and World Cup titles. She is also regarded as one of the best cross-country skiers in the world. In 2012, Neuner retired from the sport, stating she wanted to focus on coaching and eventually build a family.

Magdalena Forsberg is a famous Swedish biathlete. After competing on Sweden’s Olympic cross-country team in 1992, she decided to try biathlon and quickly became recognized for her talented skiing and precise shooting skills. At the Olympic Games in 2002, she was the flagbearer for the Swedish national team at the opening ceremonies. Forsberg ranked first in the Biathlon World Cup from 1997-2002 and was recognized as one of the best female biathletes of the 20th century. She held the record for overall World Cup points until 2012, when Magdalena Neuner beat her record.

Anastasiya Kuzmima is a famous Olympic biathlete who competed on the Slovakia national team. She made her Olympic debut at the 2010 Vancouver Olympic Games and has won six Olympic medals throughout her career. Aside from the Olympics, Kazumina has shown success at the Biathlon World Championships. She has earned three World Championship medals and has appeared on 31 Biathlon World Cup podiums. Before her biathlon career, Kuzmina was a cross-country skier. After she switched to biathlon, she admitted that she struggled with shooting right until the end of her career.

Who is the greatest women’s biathlete of all time?

Kati Wilhelm is the greatest women’s biathlete of all time. Her accomplishments that span over a 10-year career in the sport illustrate her extreme talent. Not only did her seven Olympic medals earn her the title of most decorated Olympian female biathlete, she also earned 5 World Championship wins and 29 gold World Cup Podium appearances. She also earned a Big Crystal Globe trophy in 2005, which is awarded to the athlete with the largest total score from the World Cup Season.

Who holds the record for World Cup individual race victories in women’s biathlon?

Magdalena Forsberg holds the record for most World Cup individual race victories in women’s biathlon. During her athletic career, she won 42 individual races over a series of World Cups and earned a total of 73 World Cup podium appearances.

Who has the most women’s Biathlon World Championship gold medals?

Pages Related to Top 6 Best Women's Biathletes Of All Time