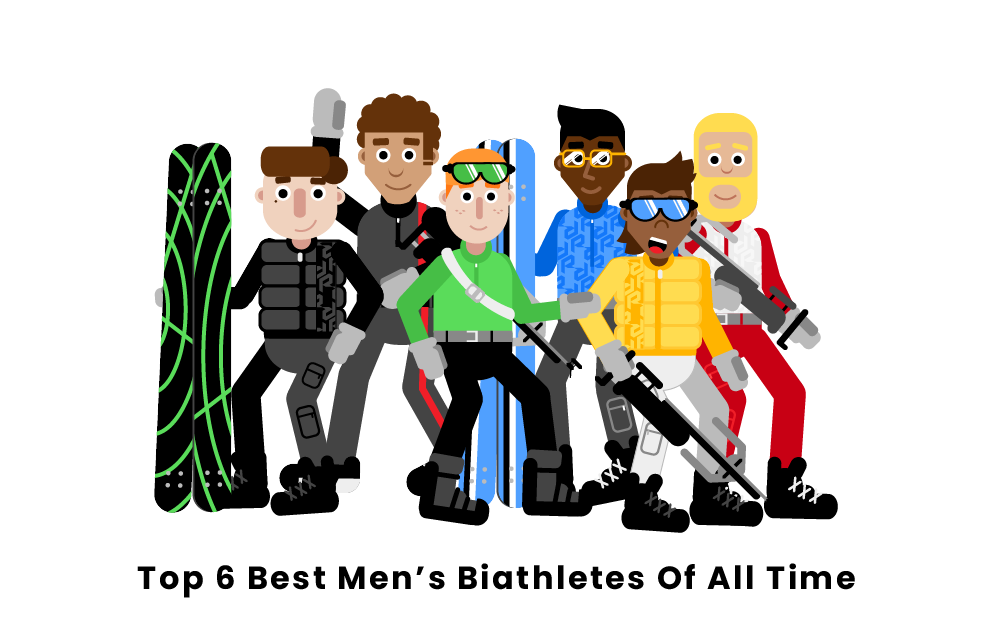 Biathlon is a Nordic skiing winter sport that is considered a mix between cross country skiing and rifle shooting. Biathletes compete in a multitude of different biathlon variations from sprints to relays in an attempt to ski a certain distance while at points stopping to shoot at targets. Certain biathletes have separated themselves from their competitors with incredible achievements in the sport. Here are the top six best men's biathletes of all time.

Who are the best men's biathlon athletes of all time?

Ole Einar Bjørndalen was born in Drammen, Norway, on January 27th, 1974. At age 16, he left home to train in both cross country and biathlon before joining the Norway Olympic Biathlon team in 1994. In his highly accomplished career, Bjørndalen competed in six different Olympic Games from 1994 to 2014. Over this 20 year span, he won 13 Olympic medals on his way to becoming the most decorated male Winter Olympian of all time.

Martin Fourcade is a French biathlete born in Ceret, France, on September 14th, 1988. Fourcade began his biathlon career in 2002 and joined the French biathlon team in 2006. By 2010, Fourcade competed in his first Winter Olympics in Vancouver, winning a silver medal. Fourcade rose to stardom in the 2014 and 2018 Winter Olympics by securing two gold medals and a silver medal in Sochi and three gold medals in PyeongChang.

Frank Ullrich is a German biathlete born on January 24th, 1958, in Trusetal, Germany. Growing up, Ullrich's father was a biathlon referee, which set him on his course to becoming one of the best to play the sport. During his career from 1966 to 1987, Ullrich won four Olympic medals across three Olympic Games (1976 to 1984), with his best performance coming in the 1980 games in Lake Placid, in which he won one gold and two silver medals. After his wife's passing, Ullrich retired from competition to become a trainer for the German national team.

French biathlete Raphaël Poirée was born on August 9th, 1974 in Rives, France. With an active career from 1995 to 2007, Poirée is one of the most successful biathletes of all time with four World Cup titles and nine World Championship wins. The only thing missing from Poirée's resume is an Olympic gold medal, despite securing a total of three medals, one silver, and two bronze, across three Olympic Games (1998, 2002, 2006).

Russian biathlete Alexander Tikhonov was born on January 2nd, 1947, in Uyskoye, Russia. Tikhonov participated in four Olympic Games from 1968 to 1980, winning an individual silver medal in the first and a team relay gold medal in all four. In addition to his success in the Olympics, Tikhonov also secured nine Biathlon World Championships gold medals and was the first-ever World Cup Champion in 1977. After his biathlon career, in 2002, Tikhonov was elected vice president of the International Biathlon Union.

German biathlete Ricco Gross was born on August 22nd, 1970, in Bad Schlema, Germany. He started as strictly a cross country skier before switching to biathlon at 13. He made his World Cup debut at the age of 20 before his Olympic debut in 1992. In his career, Gross went on to compete in five Olympic Games from 1992 to 2006, winning eight medals, four of which were gold. Gross was also a nine-time World Champion and World Cup champion. After his own biathlon career, Gross turned to coaching and is currently the head coach of the Australian national team.

Who has the most gold medals in men's Olympic biathlon history?

Ole Einar Bjørndalen has the most gold medals in men's Olympic biathlon history at a total of 13 medals. This includes eight gold medals, four silver medals, and one bronze medal in his decorated Olympic career. Bjørndalen accomplished this feat across the span of six different Olympic Games from 1994 to 2014, with his most successful Olympics being the 2002 Olympics in Salt Lake City, where he won four gold medals.

What are the largest men's biathlon events in the world?

Who has won the most gold medals in the men's Biathlon World Championships?

Ole Einar Bjørndalen has the most gold medals in the men's Biathlon World Championships with 18 first-place finishes. These medals were a result of victories across multiple biathlon events, including four in the sprint (10KM), four in the pursuit (12.5KM), six in the relay (4 x 7.5KM), two in the mass start (15KM), one in the individual (20KM), and one team medal.

Pages Related to Top 6 Best Men's Biathletes Of All Time