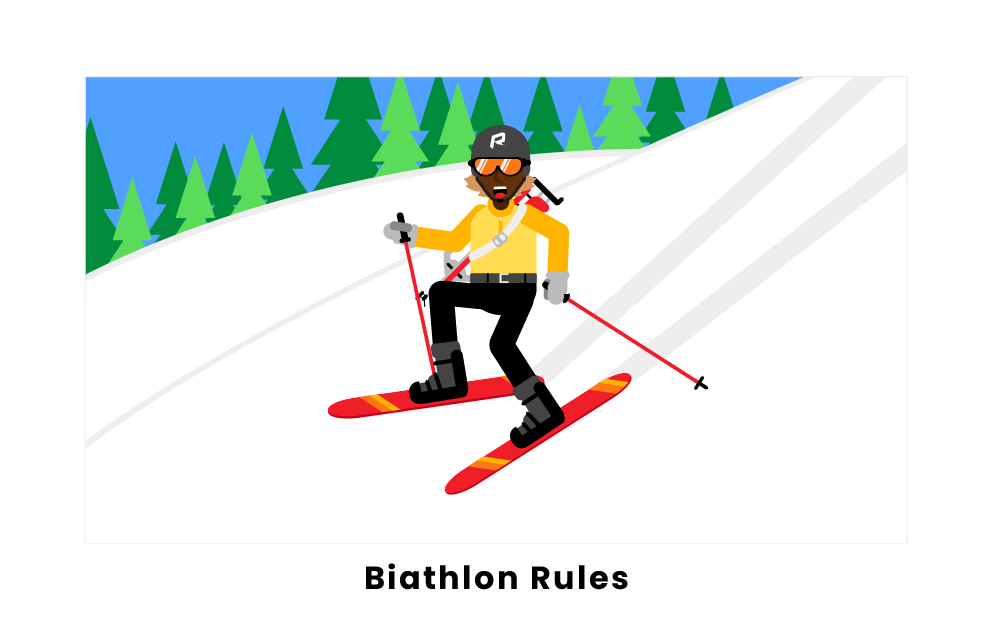 Biathlon is one of the most exciting and unique winter sports. Combining strenuous cross country skiing with precise rifle target shooting, biathlon started as a Norwegian military exercise and developed into a sport. Here is a list of the top 10 rules of biathlon to help make sense of this unusual and historic competition.

What are the most important rules of biathlon?

There are eight different types of biathlon races: individual, sprint, super sprint, pursuit, mass start, relay, mixed relay, and single mixed relay. Individual races are the traditional format, with competitors starting at regular intervals, skiing five laps over 15 or 20km, and shooting four times. Sprints and super sprints are shorter races with three ski laps and only two shooting bouts. Pursuit is similar to individual, but with starting intervals determined by a previous heat. The mass start formats are similar in length to individual races, but with all competitors starting simultaneously. Relay races feature four skiers who each ski a leg over three laps, with two shooting bouts separating the laps. Mixed relay is the same, but with a team of two women and two men; single mixed relays use teams of one woman and one man.

Biathlon tracks must feature a start and finish area, a shooting range, a penalty loop, and a relay hand-over zone, all on level ground and in close proximity, to allow optimal spectator and television viewing. There are several standard loop lengths for biathlon tracks, each corresponding to particular events. Super sprint races are held on 800m loops, relay and pursuit races on 2.5km loops, mass starts on 3km loops, sprints on 3.3km loops, and individual races on 4km loops. The amount of vertical climb in a course also varies based on event length, but all courses must have no more than 80m elevation change between the highest and lowest points of the course.

In a biathlon race, competitors must yield to faster skiers who wish to overtake them from behind. In order to initiate a pass, an overtaking skier yells “track” to alert the skier in front of their presence and desire to pass. The skier being overtaken must immediately yield the racing line upon hearing any voice signal, even if the course is wide enough to pass using a different line. However, these rules do not apply during the final 50m of a competition or the final 50m before the relay hand-over zone. In these end-of-segment situations, skiers are not obliged to yield to those behind.

There are two shooting positions in biathlon competitions: standing and prone. Every biathlon event requires at least one shooting bout in each position. The sequence of prone and standing shooting bouts varies by event and is determined by the type of competition. For example, an individual race features four shooting bouts, alternating between prone and standing. In the prone position, shooters must lie on the snow, with only their hands, shoulder, and cheek in contact with the rifle, keeping the wrist of the supporting arm above the snow surface. The standing position requires competitors to stand unsupported with only their hands, cheek, shoulder, and chest in contact with the rifle. Biathletes must keep their skis on while shooting in either position

During a biathlon, skiers must carry their rifles on their backs using the attached shoulder straps, with the barrel pointing upward. Biathletes use .22 caliber bolt action rifles and carry four magazines of five rounds each on their persons. The rifles must pass a pre-race inspection and weigh at least 3.5kg, with at least 0.5kg of trigger resistance. A rifle that becomes so damaged during competition that it cannot be carried on the skier’s back must be safely carried by hand to the shooting range and exchanged for the team’s reserve rifle. Rifles may only be fired, repaired, or exchanged at the shooting range.

All types of cross country skiing techniques may be used in a biathlon competition. This includes the classic technique, in which skiers keep their skis within a set of tracks, using downward and outward pressure on the skis to propel themselves. Also permitted is the free technique, in which skiers are not required to remain in tracks and may employ skate skiing. The free technique is preferred and used nearly exclusively by competitors at the highest level of biathlon. Relay, mass start, and group start races feature tracks immediately after the start line; in these sections with tracks, only classic technique is permitted. Skiers must carry their rifles and ammunition at all times.

Biathlon is essentially a cross country ski race with shooting rounds interspersed throughout. In mass start, relay, and pursuit events, the first competitor to cross the finish line is the winner. In individual and sprint events, which use interval starts, the skier who completes the course in the shortest time is declared the winner, with slower times earning lower finishing positions accordingly. The total time over the course includes time spent in shooting bouts as well as any time required to complete penalty loops or any time penalties assessed. In IBU Cup and World Cup competitions, the first-place finisher receives 60 points, with lower placing finishers receiving decreasing amounts down to one point for 40th.

In biathlon competitions, penalties are assessed against competitors who fail to hit all of the required targets during the shooting bouts. Biathletes must hit five targets during each shooting bout, usually requiring them to hit a target with every round fired. Depending on the type of event, missed targets result in either a time penalty being assessed or the competitor being required to ski around a penalty loop before proceeding along the course. Missed shots in individual races are punished by a one-minute time penalty being added for each missed shot. A missed shot in sprint, pursuit, mass start, and relay competitions results in the competitor skiing a 150m penalty loop following the shooting bout.

In the Olympics, competing nations are permitted to send between two and six biathletes of each sex, depending on that nation’s ranking in the World Cup Nations Cup standings, with higher-ranked nations receiving more quota places. Biathletes can qualify for the Olympics by competing in eligible biathlons in the preceding season. Achieving two top-half finishes in the Junior World Cup or participation in two races among the IBU Cup, world championships, European championships, or World Cup events with a maximum of 150 qualifying points will make an athlete eligible. If athletes have competed in more than two eligible competitions, they must not have earned more than 180 IBU points in order to qualify for the Olympics.

What is a biathlon?

A biathlon is a winter snow sports competition that combines cross country skiing with target rifle shooting. Biathlons are races or timed competitions consisting of alternating laps skied around a course and rounds of target shooting. Biathlon competitors, called biathletes, must carry their rifles on their backs during the skiing portion. They must also keep their skis attached during the shooting portion. Biathlons take the form of individual races or relay team competitions with same-sex or mixed-sex teams. Several biathlon formats exist with varying lengths between 2.4 and 20 km.

What happens if you get lapped during a biathlon?

Depending on the event, you may be forced to withdraw from competition if you get lapped during a biathlon. Sprint, pursuit, and mass start races all require athletes to withdraw if the leader laps them before they have begun their next shooting bout. This rule does not apply to individual biathlons. In relays, any team that has not begun their final shooting bout when the leader finishes will be stopped and awarded the finishing place they occupied at the last split timing point.

What is the penalty for missing the target in biathlon?

The penalty for missing the target in biathlon is having seconds added to your finishing time. In individual races, this takes the form of a one-minute time penalty being automatically assessed at the end. Other formats punish each missed target with a lap around a 75m or 150m penalty loop before the skier may proceed with the competition, thus adding to their overall time. A 150m penalty loop takes an elite biathlete 20 to 30 seconds to complete.