How Does Scoring Work in Biathlon? 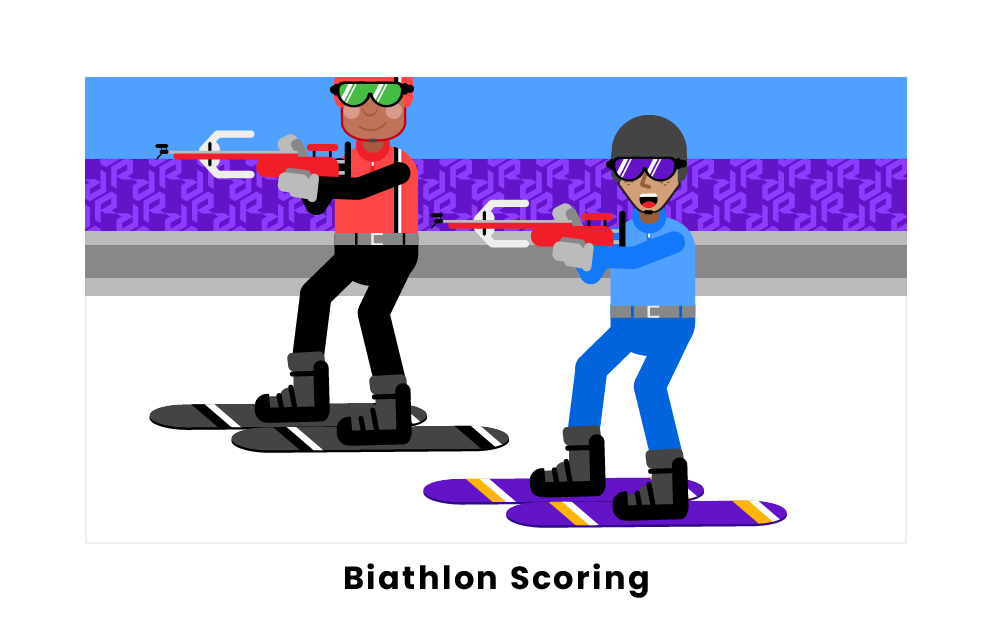 Biathlon combines cross country skiing and rifle shooting into one exciting competition. The exceptional athleticism and focus required by the athletes are entertaining to watch but can be confusing for new fans to learn. Read more to learn about the scoring system used in biathlon.

There are five different types of events in biathlon: individual, sprint, relay, pursuit, and mass start. In each event, the skiing distances, number of targets, or shooting style (prone vs standing) may differ, but the end goal is the same, to finish first. The shooting portion is scored using an electronic pulse system for all biathlon competitions. The targets have plates behind them that detect each time they are hit and send a pulse that raises a flag to indicate how many hits have been scored. This scoring system allows officials to distribute penalty laps or added time to athletes who missed their targets.

The scoring for each type of biathlon event is as follows:

Athletes can be given penalty time for a variety of reasons. The most common penalty is for missing a target during the shooting rounds, resulting in a one-minute penalty or a mandated run through a 150-meter penalty lap located just beyond the shooting area. If the athlete were to skip that lap and proceed to the next skiing area, they would receive a two-minute penalty. They can also be assessed a two-minute penalty for using the incorrect skiing technique (freestyle instead of classical), not firing all five of their rounds during the shooting segment, or not giving way when a competitor has requested to pass during the skiing portion of the competition.

Officials have many responsibilities with regards to scoring in biathlon. They must ensure that athletes start on time, as many of the events have staggered starts, and they must apply penalties to athletes that start early. They are also responsible for performing pre and post-event inspections of skis and rifles to ensure athletes use safe and legal equipment. Equipment violations could lead to penalty time or even disqualification. Officials are also responsible for enforcing rules of the competition, such as allowing a pursuing competitor to pass during the skiing portion of the competition or making sure that athletes always have the rifles on their back with the barrel facing upwards during the skiing portion.

What is the scoring system in biathlon?

How does the IBU rank biathletes?

How does biathlon scoring work in the Olympics?

In the Olympics, athletes are ranked based on their net times after penalties are applied for both the individual event and the sprint event. For the mass start, pursuit, and relay events, the only thing taken into account is who crosses the finish line first. Scoring in the biathlon during Olympic competition includes a penalty loop of 150 meters for every target missed during the shooting stage of the competition. Lastly, any competitor or team that is lapped during an event must withdraw.

How many targets must be hit in each round in biathlon?

At each shooting area in biathlon, biathletes must hit five targets with five rounds each. Depending on the event and the round, some targets will need to be hit from the prone position while others will need to be hit from the standing position. The athletes only have enough ammunition for one shot per target and face a time penalty or 150m penalty lap if they fail to hit each target. However, in relay events, competitors get three additional rounds if they miss a target on their first five shots. These extra rounds will need to be manually loaded, and if there are still unhit targets remaining after the extra shots, they must take the 150m penalty lap.

Pages Related to How Does Scoring Work in Biathlon?