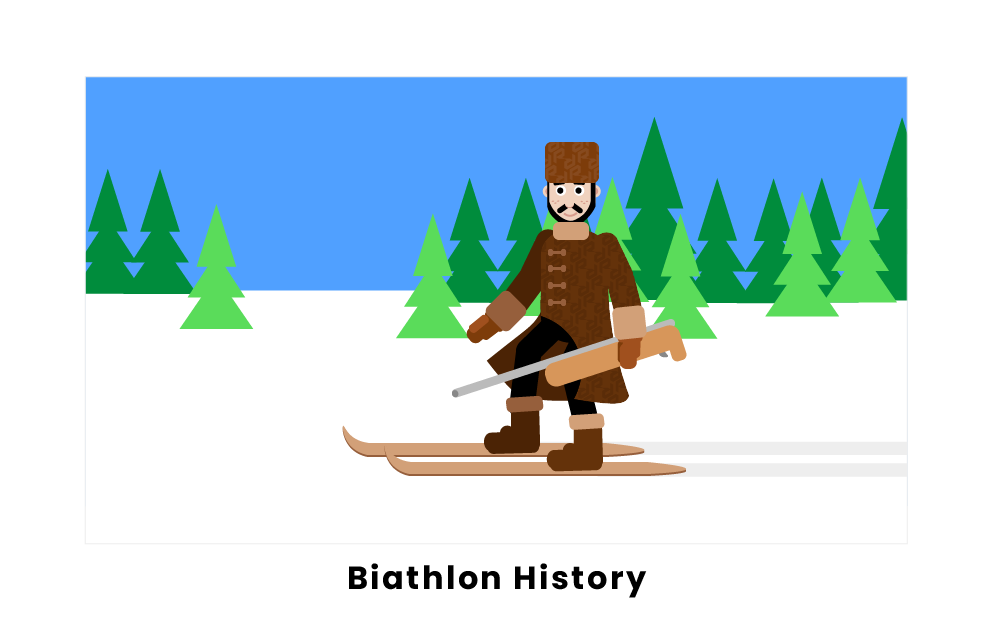 Biathlon is a fascinating and intense winter sport with a military and hunting background. This unique competition that combines cross country skiing with precision rifle target shooting started as an army training exercise in Norway. Strongly linked with the Olympics, biathlon was part of the first Winter Games, and it has developed to include several exciting formats.

While biathlon is largely viewed as a modern sport, it draws influence from ancient forms of hunting and transportation dating back thousands of years. Read on to learn more about the history of biathlon.

The origin of biathlon lies in Scandinavia around 2000 BCE. Indigenous people who had already been using a primitive form of cross country skiing as transportation began hunting for game from their skis, as recorded by cave paintings in Norway. By the thirteenth century, Norway, Sweden, and other Nordic countries had incorporated ski troops into their militaries, marking the first instance of organized skiers carrying weapons.

The first competition that resembles modern biathlon was organized by a general in the Danish army named Schack Carl Rantzau. In 1767, while overseeing the Danish forces in Norway, he designed four different ski events for his ski troops to compete in. One of the contests required soldiers to shoot at targets between 40-50 paces away while skiing downhill as fast as possible.

Although public ski competitions were held throughout northern Europe in the nineteenth century, the first major international biathlon competition occurred in 1924, at the inaugural Olympic Winter Games in Chamonix, France. Among the four skiing events was military patrol, which required a group of four athletes to ski 25km while carrying backpacks and rifles, which they fired over several rounds as part of the competition.

Over the next thirty years, military patrol was included in the Olympics in three Winter Games, but only as a demonstration event. The Union Internationale de Pentathlon Moderne et Biathlon was formed in 1948 as the international governing body of biathlon and modern pentathlon competitions. Then in 1955, the IOC recognized biathlon as an official Olympic sport, setting it up for inclusion in a Winter Games, which soon happened in the 1960 Winter Games in Squaw Valley, California.

The first expansion to Olympic biathlon came in 1968 when men’s relay was added to the list of events at the Grenoble Winter Olympics. The 10km sprint event followed at the Lake Placid Winter Games in 1980. Equivalent women’s biathlon events were added to the competition at the Albertville Winter Olympics in 1992.

The pursuit format was first included in the 2002 Salt Lake City Winter Games, and the mass start events debuted at the Turin Winter Olympics in 2006. The most recent addition to Olympic biathlon events is the mixed relay, with teams composed of two male and two female biathletes, first seen at the Sochi Winter Games in 2014.

What is the history of biathlon?

Biathlon traces its roots to Scandinavia, where indigenous people hunted on skis millennia ago, and armies adopted ski troops in the thirteenth century. The first biathlon occurred as part of a military ski competition organized in Norway in 1767, in which competing soldiers had to shoot at targets while skiing downhill. Biathlon was an event in the first Winter Olympics in 1924; at that time it was called military patrol. The sport was first included in its modern format in the 1960 Olympics.

Biathlon was invented by Carl Schack Rantzau, a Danish nobleman who joined the army as a teenager after falling into debt at a young age. Eventually, Rantzau rose through the ranks, becoming the general in charge of Denmark’s forces in Norway. He disliked this post, and so he created four categories of military ski competition as a diversion. One of these categories was shooting at prescribed targets while skiing downhill at maximum speed, a direct predecessor to modern biathlon.

Where did biathlon start?

Biathlon started in Norway, in the mountains along the border it shares with Sweden. Armed troops on skis had been a part of national militaries throughout Scandinavia since the thirteenth century. However, in 1767, a Danish general serving in Norway organized a multi-discipline military skiing competition, with one of the events involving rifle target shooting while skiing downhill. This was the first biathlon-style competition. The 1924 Winter Olympics in Chamonix, France, was the venue for the first international biathlon competition following rules resembling modern biathlons.

Pages Related to History of Biathlon