What is Beach Volleyball? 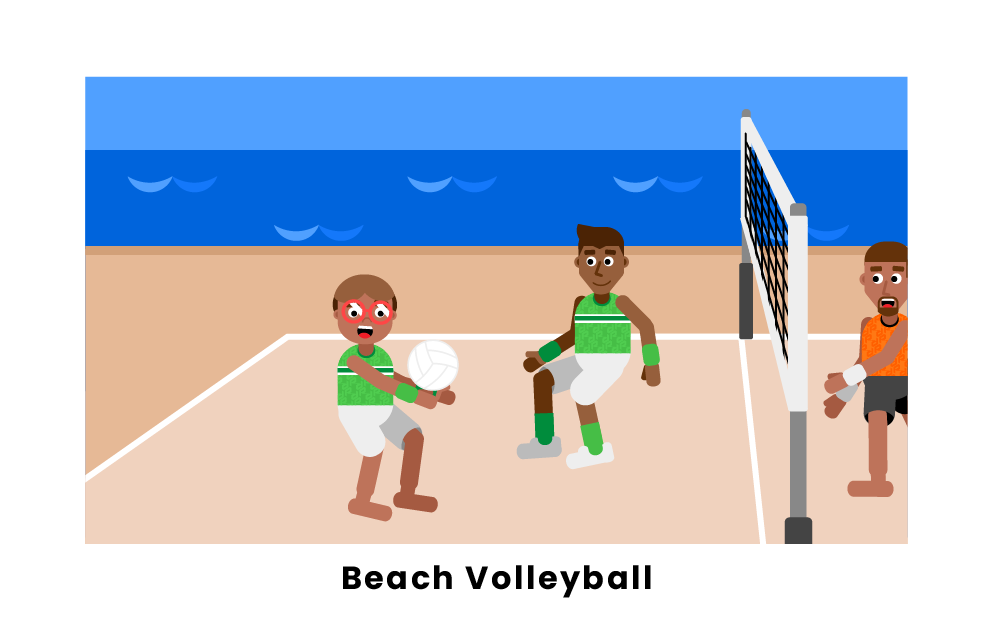 Beach volleyball is a team sport in which players take turns hitting a volleyball back and forth over a net using their hands and arms. Beach volleyball closely resembles traditional indoor volleyball, with the two main differences being the playing surface and the number of players per team: it is played on sand and in teams of pairs. Today, beach volleyball is a fairly common recreational and competitive sport played by nations from all over the world. 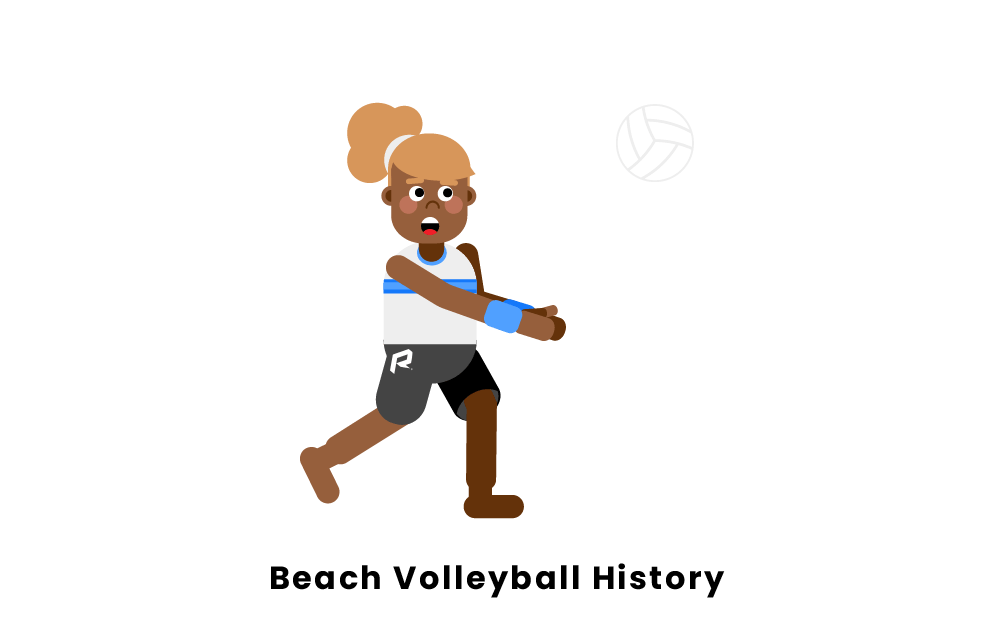 Beach volleyball first began in a recreational capacity on the beaches of Santa Monica, California in the 1920s.

In the United States, the sport gained popularity amidst the Great Depression of the 1930s. The first men's pairs competitions were held in the 1940s, and by the 1950s there was a circuit competition held throughout California.

Beach volleyball continued to grow, intersecting with American pop culture and attracting sponsorships in the 1960s. It first appeared in the Olympics at the 1996 games in Atlanta, and has been a mainstay ever since. 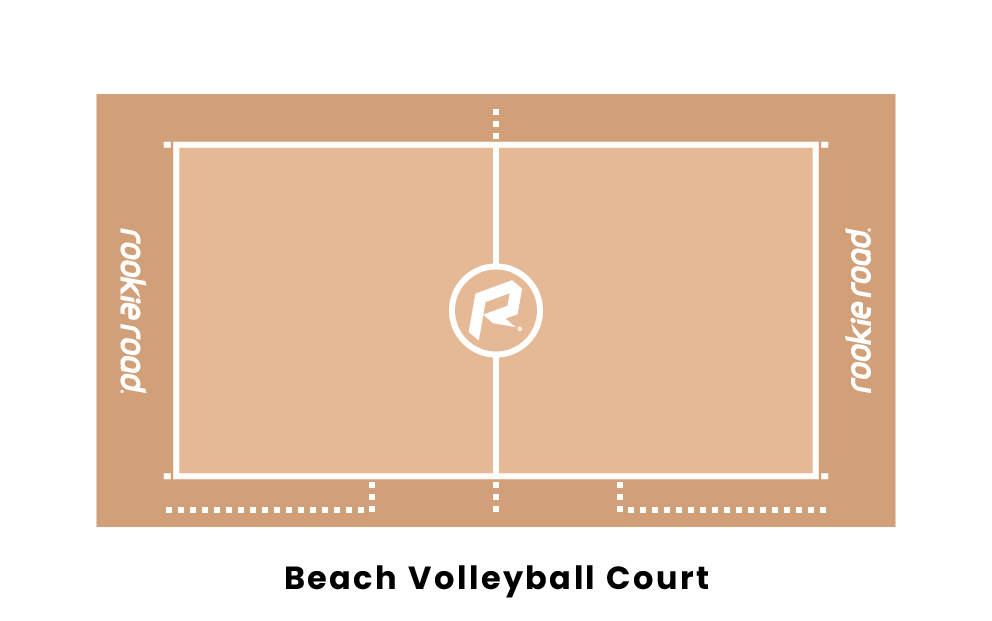 Beach volleyball is played on natural or imported sand. The sand must be flat, of a certain fineness, and free from any possibly harmful debris. Beach volleyball sand must also be a minimum of 40cm deep to accommodate player movement.

An official FIVB-sanctioned beach volleyball court is a 16 by 8 meter rectangle.

The lines on beach volleyball courts are made of fabric strips held down by anchors. These are designed to keep the dimensions of the court intact while not being trip hazards. 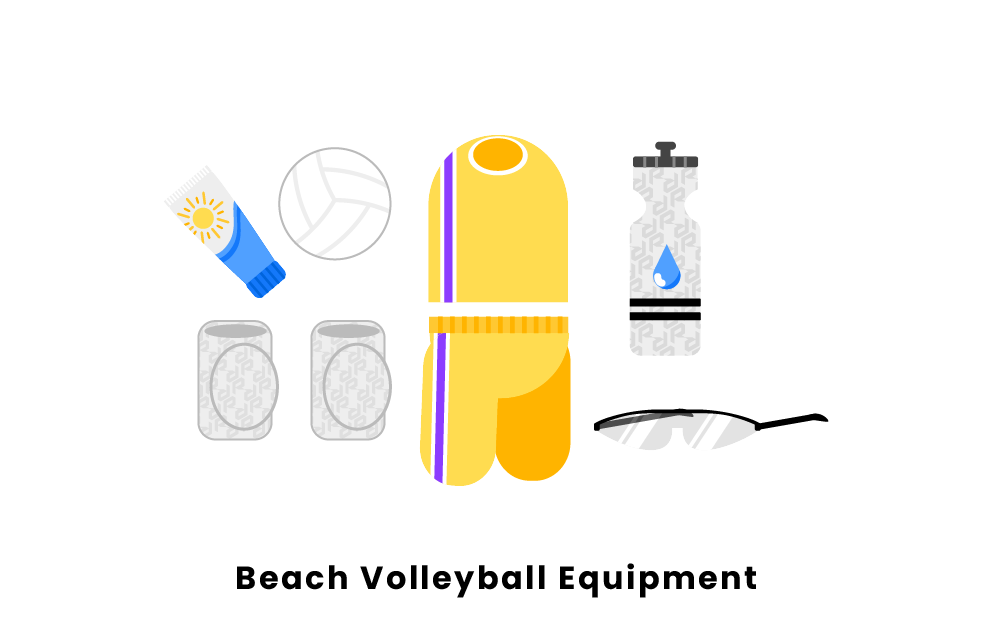 The ball is a 66 to 68 centimeter sphere made of flexible and waterproof material. The net is 8.5 by 1 meters in size and made of canvas, cable, and a mesh net.

Player uniforms include shorts and a tank top, although some players are allowed to compete without a shirt or tank top. In most beach volleyball competitions, men are often shirtless or wear tank tops, while women usually wear athletic or swim tops. 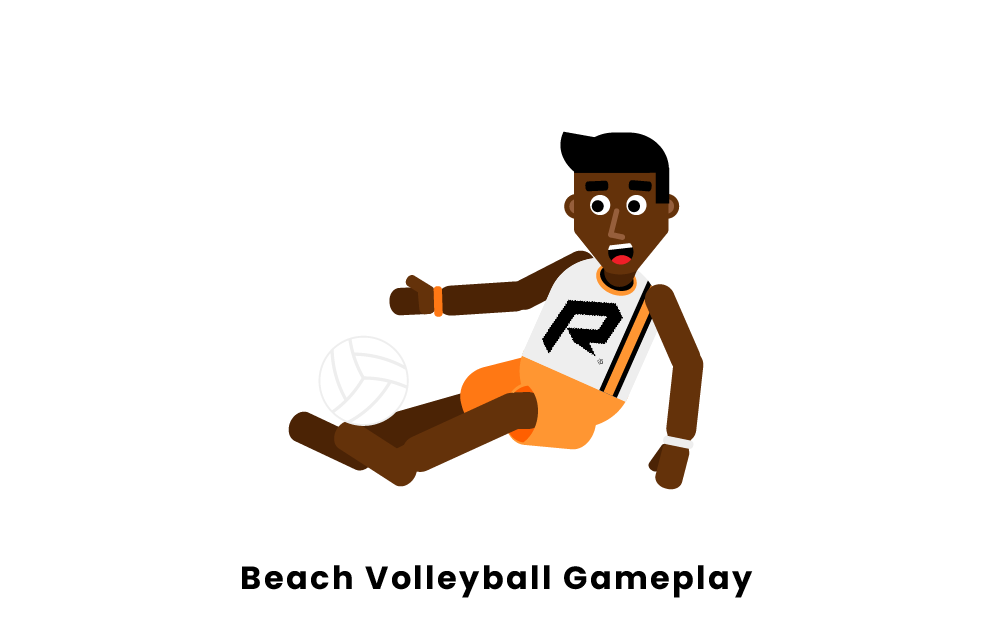 Beach volleyball is scored using points and sets to win matches. A team must get to 21 points to win a set. The first team to win two sets wins the match. If the two teams split the first two sets, a third set is played to 15 points.

Each set must be won by at least two points. Therefore, a set that is tied 20-20 continues until one team has a two-point advantage.

Points are scored when the ball lands in the opposing team's court. Points are also awarded for opponent faults or penalties. 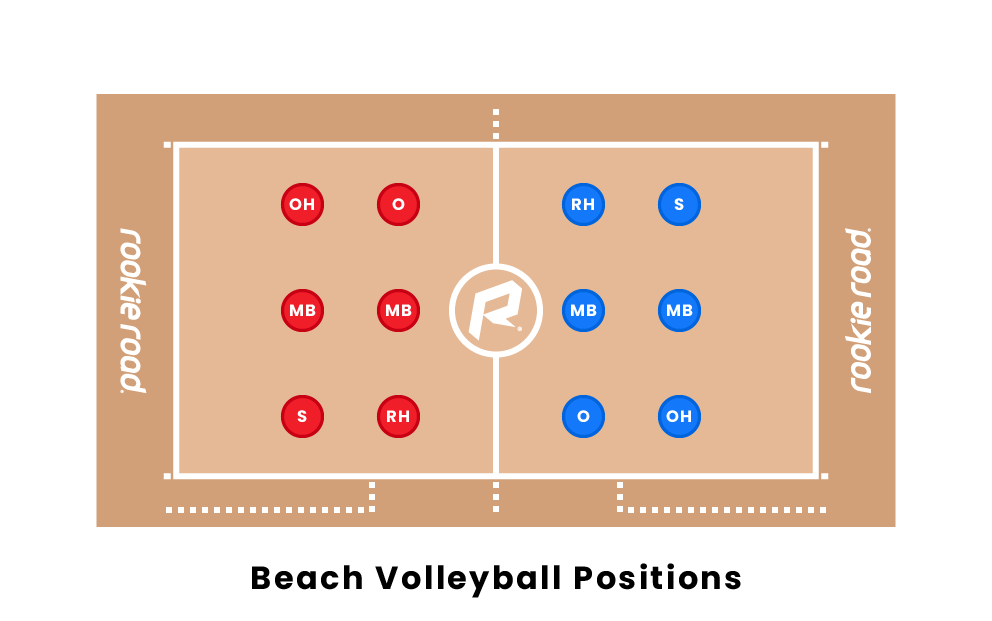 There are no set positions in beach volleyball, but each team usually has a designated desired server. The only mandatory difference between two teammates is having a team captain.

The server is responsible for putting the ball into play from the service area. Service responsibility rotates every time a team regains possession from their opponent.

The only positional regulation in beach volleyball is that when the service is struck, all other players must be inside the lines of the court.

The rules of beach volleyball are expressed in faults. A fault is any action that does not comply with the way the game is played. Faults award points to the opposing team.

Assisted Hit Fault: A player uses equipment or another player as assistance to hit the ball.

Double Contact Fault: A player hits the ball multiple times in a row.

Four Hits Fault: An infraction where a team hits the ball more than three times in order to return it.

Service Order Fault: A team does not comply with the service order.

Screening Fault: The teammate of the server prevents the opposing team from seeing the service.

Simultaneous Contacts: Two teammates hit the ball at the same time. This is not a fault, but it does count as two separate hits.

Blocking Faults: Blocking an opponent's serve, touching the opponent's space during a block, and blocking from outside the antenna are all blocking faults. 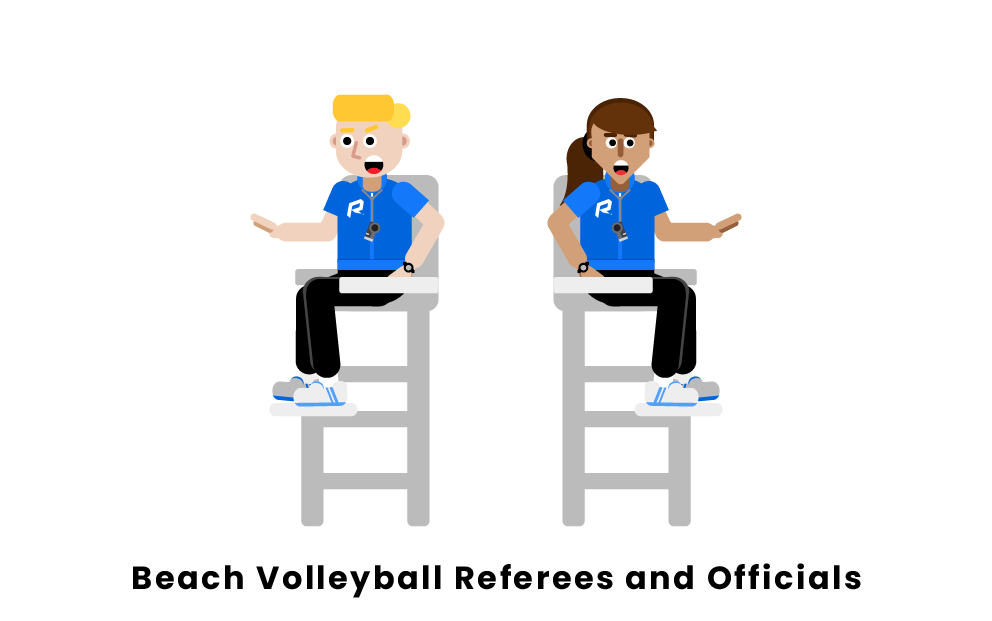 Beach volleyball referees are tasked with allowing the players to entertain the crowd while staying within the framework of the rules.

There are five to seven referees in a standard referee corps:

The 1st and 2nd referees are in charge of blowing their whistles to indicate faults. The scorer keeps track of the score sheet, while the line judges dictate whether hits are in or out. 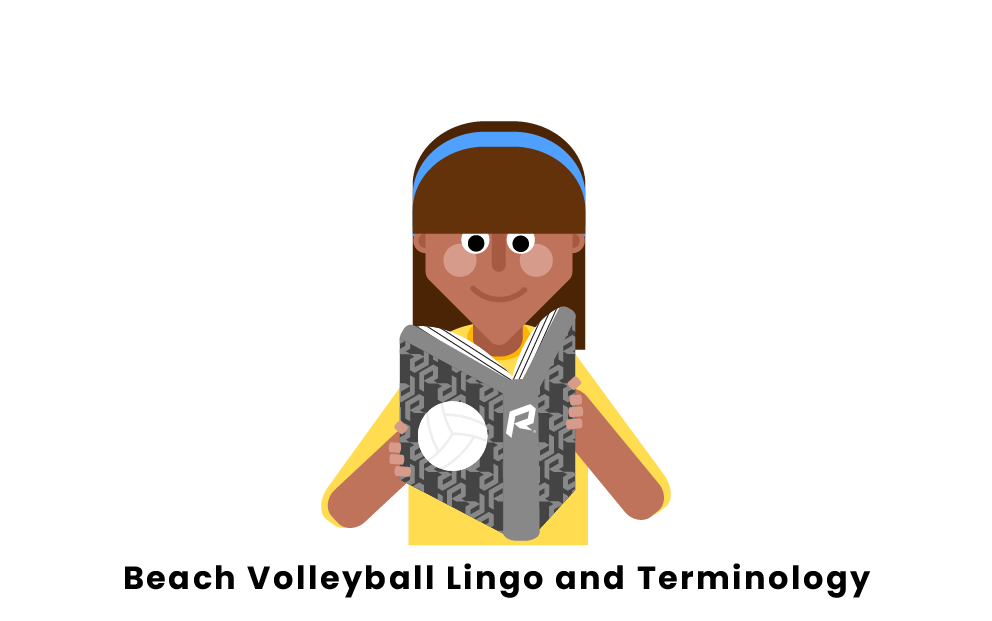 Beach volleyball shares much of its terminology with traditional volleyball. Some of this lingo is listed below:

Ace: A serve that earns a point.

Default: A game that is forfeited by one team because they do not have enough players.

Dink: A soft shot that flies just over a block.

Floater: A serve that glides over the net unevenly.

Joust: When the ball is hit by two opponents at the same time above the net.

Kong: A one-handed block, as made popular by Randy Stoklos.

Off-Hand: A right-handed player who is on the right side of the court.

On-Hand: A right-handed player who is on the left side of the court.

Rally: The ball getting hit back and forth between each team. The end of a rally signals the end of a point.

Roof Block: A block that makes the ball drop straight down.

Six Pack: A ball that hits someone in the face.

Spike: A ball hit hard and with a downward trajectory.

Wipe-off: A ball that grazes a defender's block. 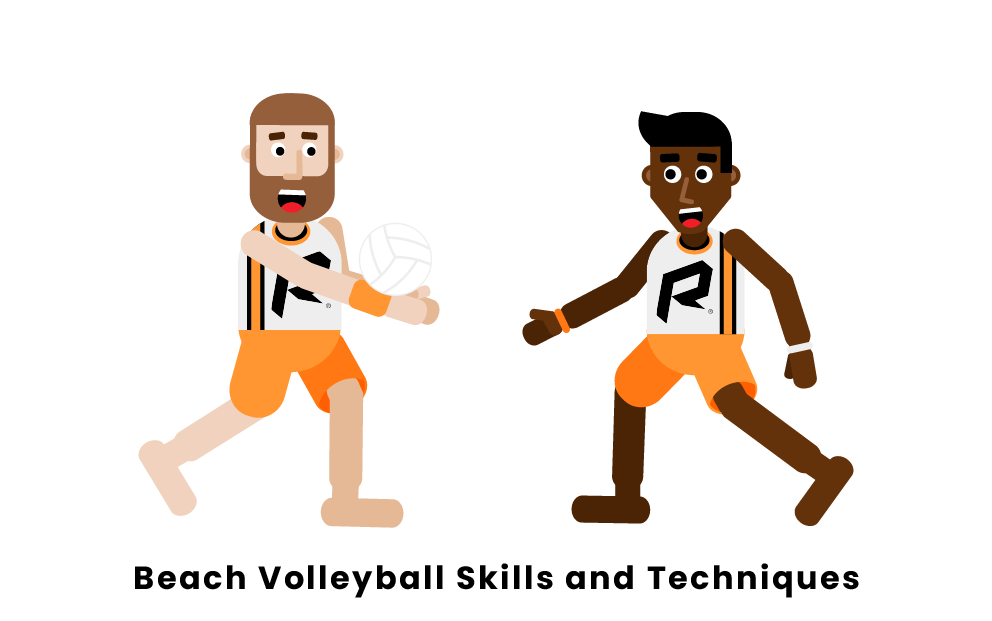 The skills required for beach volleyball are, again, very similar to those in volleyball. While these skills can be hard to acquire, they are consistently honed in training over time.

The main skills required in beach volleyball are blocking, setting, and hitting the ball. Digging, passing, and serving are other important components as well. 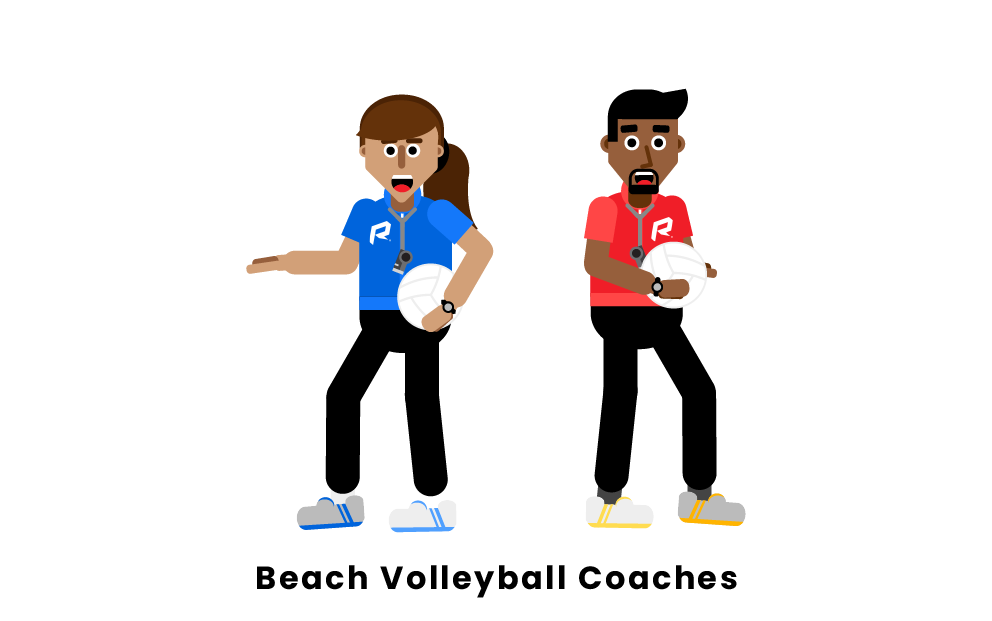 Beach volleyball coaches are usually former beach volleyball players who are committed to passing down what they have learned and helping teams win in a different capacity than playing. 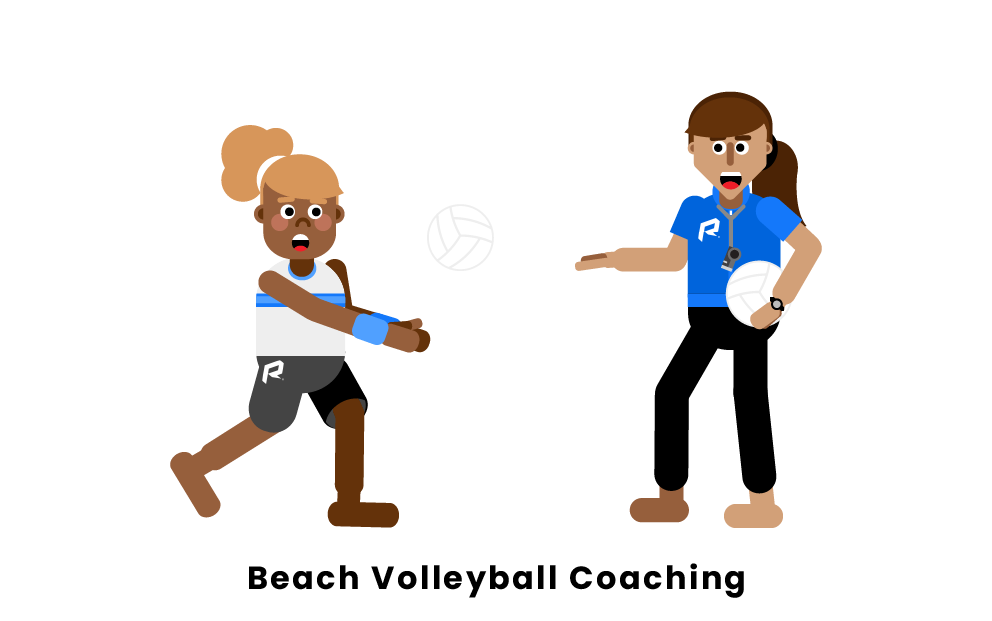 Motivation, preparation, and maintaining focus are three key aspects of a beach volleyball coach's job. The players must be excited to play, prepared to make the right decisions, and focused enough to make the plays needed to win the match. 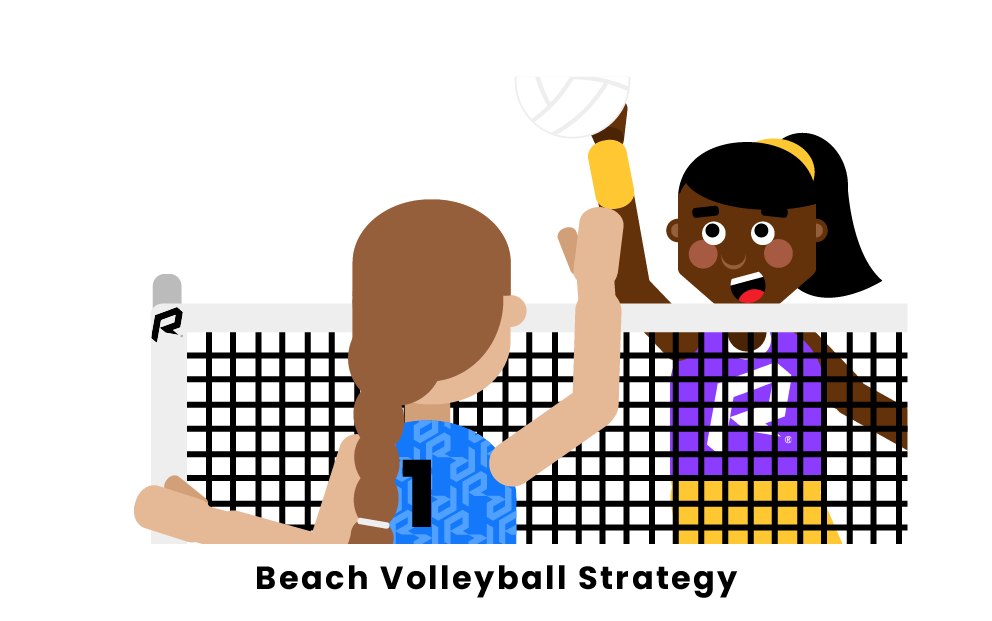 Beach volleyball players develop certain strategies for improving their chances of winning matches as they gain experience and evaluate their performances over time.

One common strategy is controlling the serve. Serving the ball can be a huge advantage to one team if used correctly. For example, if one player is particularly poor at returning, a smart server might target this weak link more often. Service direction can also be used to try to confuse the opposing team into a fault.

Communication is a major part of any successful beach volleyball team. Letting your opponent know what's going on is a huge advantage, since many unforced errors are caused by two teammates not being on the same page.

Finally, reading the opponent's hitting motion is a valuable strategy for gaining a competitive advantage. Even a small shift in hitting motion can be a big hint as to where the ball is going. 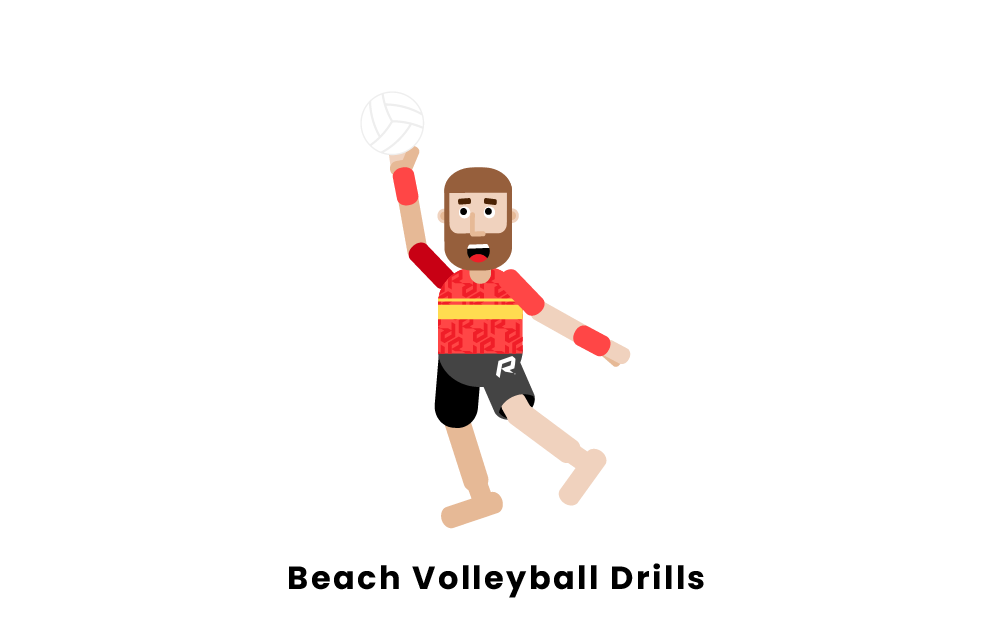 The best way to get better at beach volleyball is by playing in actual games. However, there are still some drills you can practice to improve your game outside of playing an actual game:

Short Court Soccer Touch: A two person drill that makes each player use a part of the body other than their arm before hitting it over. This makes players more aware of the different types of hits they can do while also adding unpredictability to each over.

Vollis: Short for volley tennis, this drill consists of two players serving to each other. Good for improving serving and returning skills. 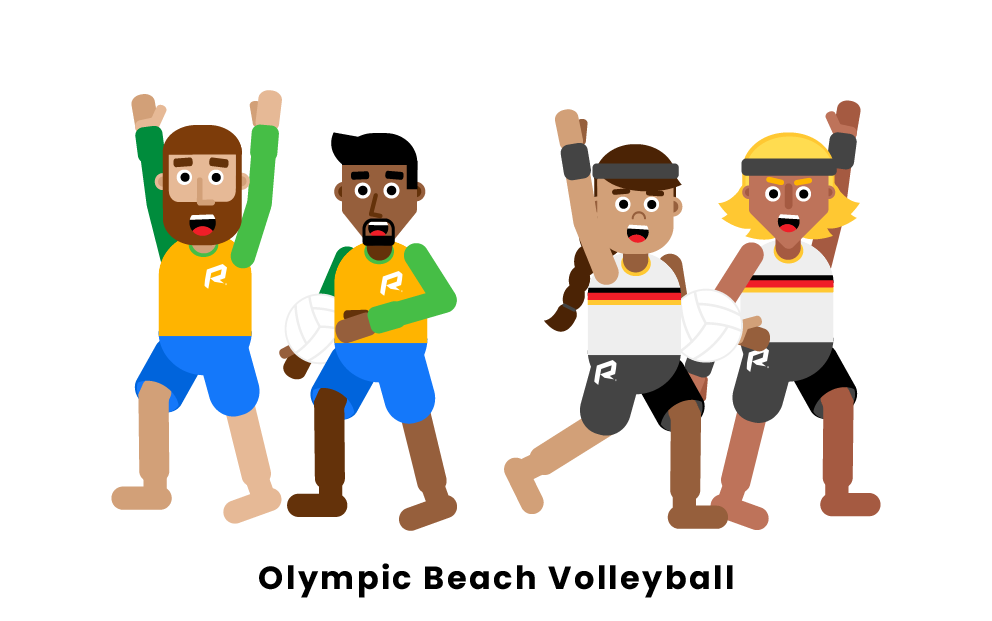 Olympic beach volleyball is considered to be the highest level of competition within the sport.

Beach volleyball was first introduced to the Olympics as a demonstration sport in 1992, in which both men and women's teams competed. Both men's and women's competitions were included in the full slate of games by 1996, and have been included ever since.

Americans and Brazilians have historically dominated Olympic beach volleyball, combining to win 9 out of the possible 12 gold medals. 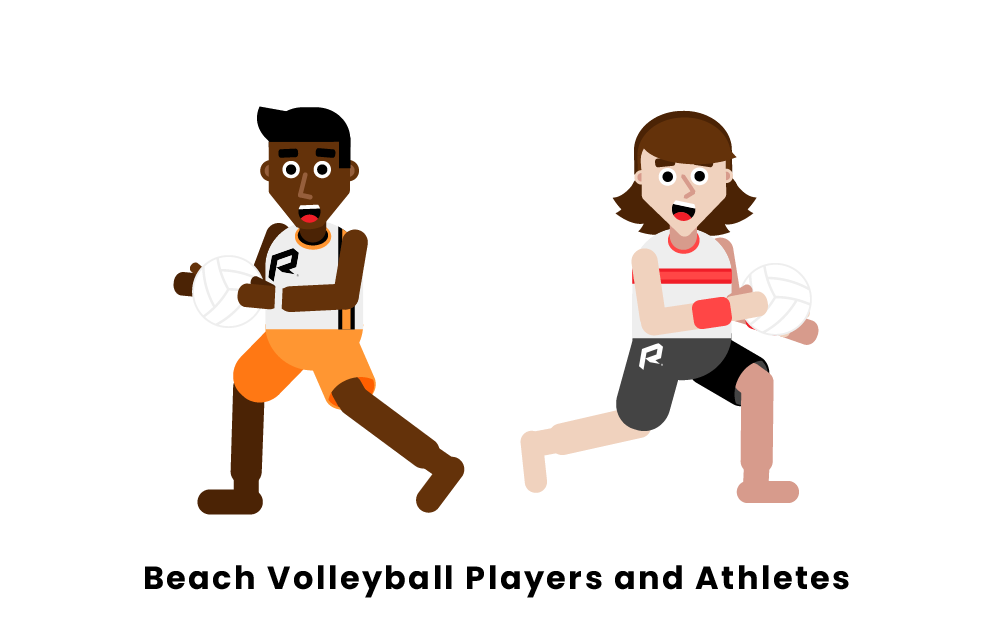 Even though beach volleyball is a relatively new sport, it still has its share of star players. Below is a list of players who demonstrated dominance in the sand. Many of them even played together. 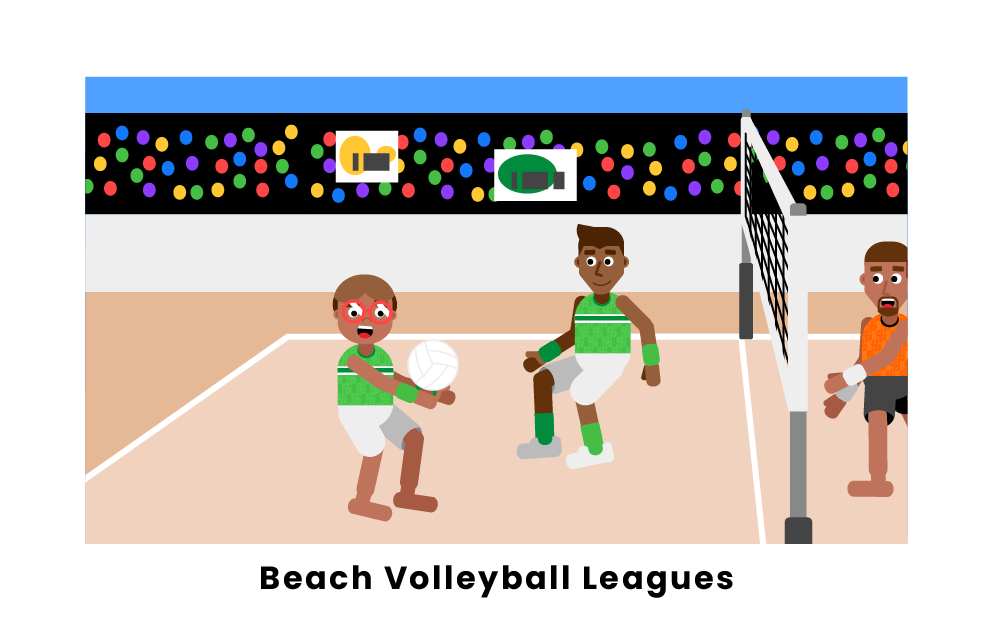 The main competition format of beach volleyball is a tour or tournament. Tours are more similar to leagues, whereas tournaments are on shorter schedules and eliminate teams much quicker. 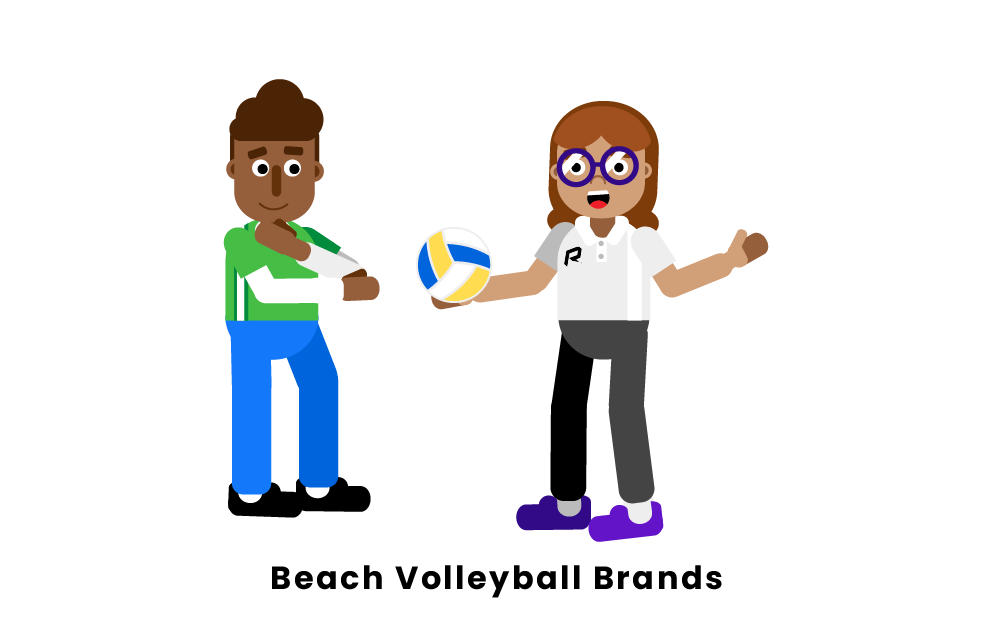 The biggest brands in beach volleyball are the competitions and equipment brands that are ever-present in the game. The Fédération Internationale de Volleyball (FIVB) is the biggest regular stage for world-class players, while USA Volleyball encompasses a massive conglomerate of indoor and outdoor volleyball teams and competitions throughout the United States.

Mikasa is the official producer of the beach volleyballs used for FIVB and the most recent Olympic competitions. However, Spalding, Wilson, and Tachikara are also prominent beach volleyball brands. 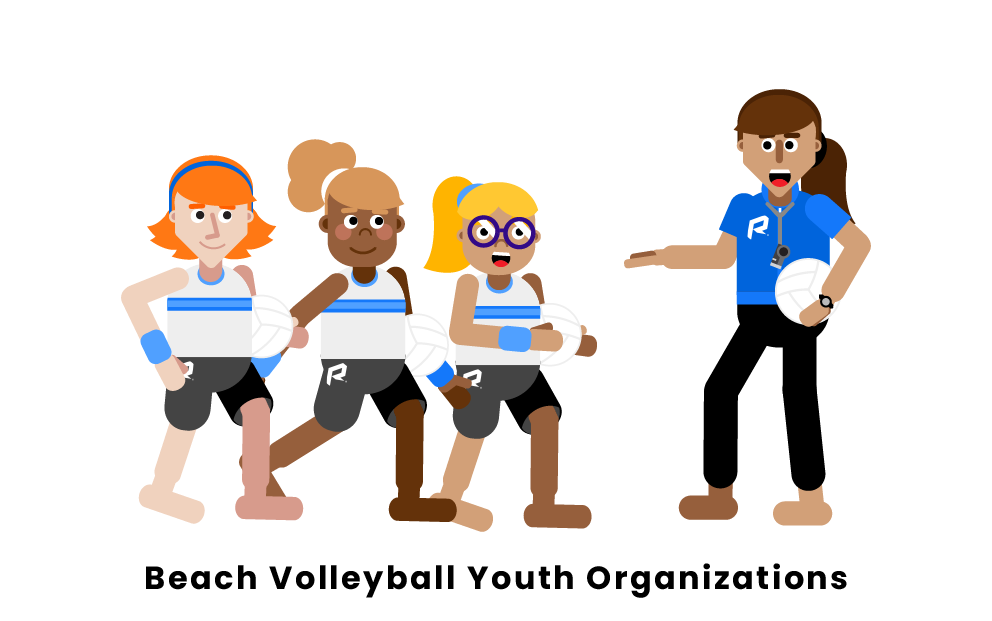 Passing down the skills and passion for beach volleyball is important for keeping the future of the sport intact. Thankfully, there are youth beach volleyball organizations to help foster a learning and appreciation for the sport.

These organizations offer competitions, clinics, tips, coaches, information about the game, and much more to help get young players involved. 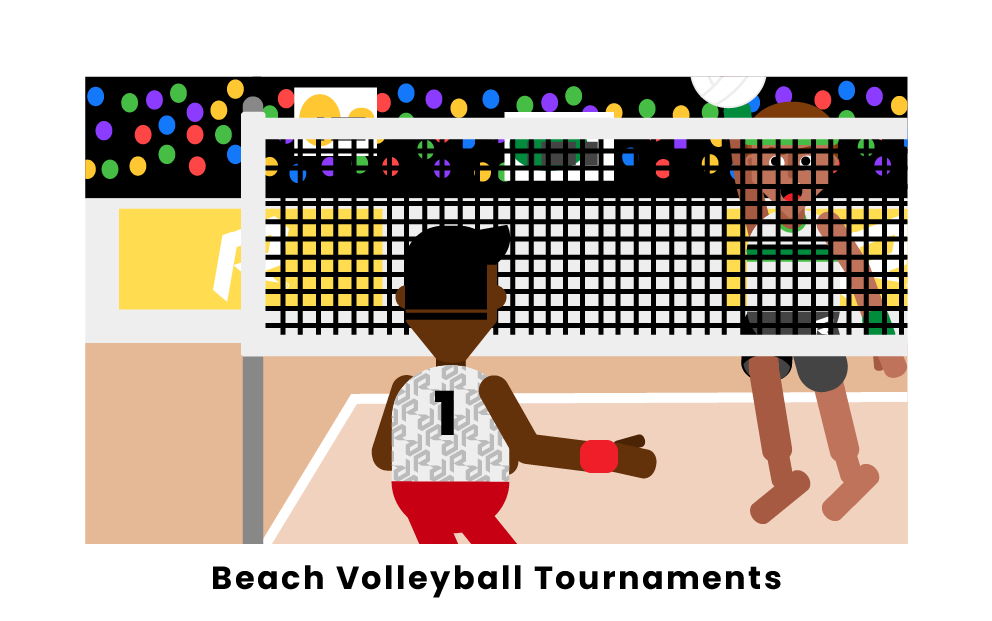 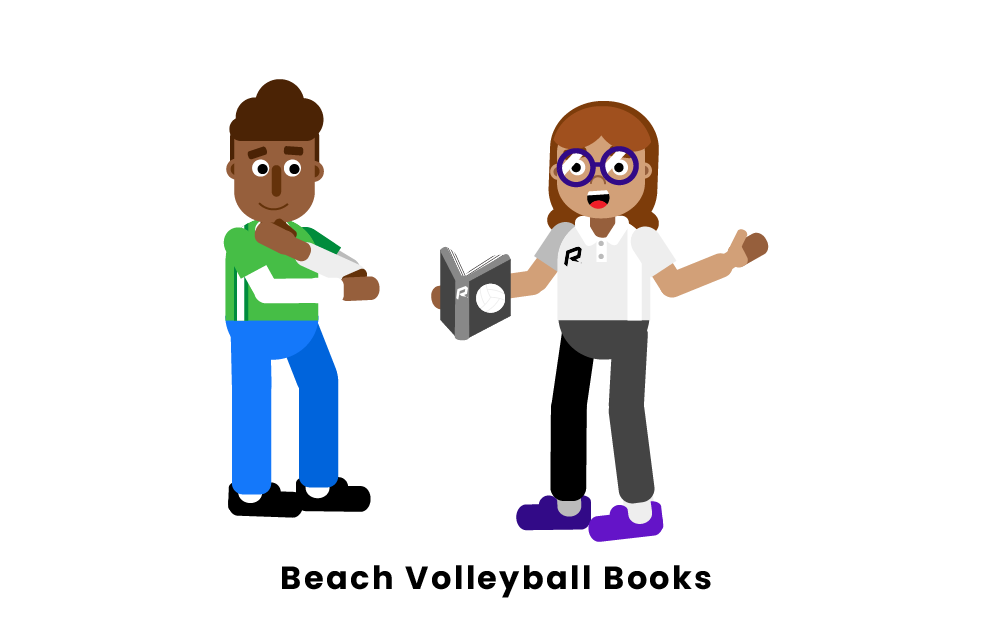 Beach volleyball may be classified as a niche sport, but it certainly has its share of quality literary works.

Beach volleyball books can touch on the game itself, a specific story related to beach volleyball, or how-to books on improving one's game through practice.

These books are often written by former players and coaches, such as Karch Kiraly, or journalists close to the game. 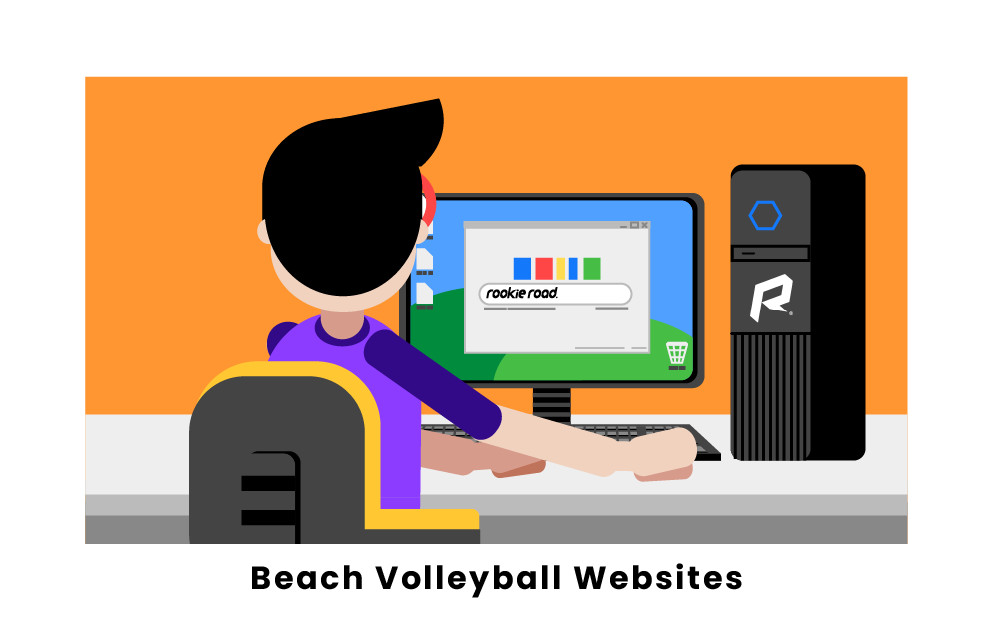 The quickest way to get involved with beach volleyball is through the internet! Check out these online resources to explore the world of beach volleyball. Whether buying equipment, getting information about various competitions, signing up to play, or simply becoming more familiar with the game, these websites will help you get more involved:

What are the rules of beach volleyball?

The basic rules of beach volleyball are to hit the ball over the net and inbounds without catching or scooping it. Anything other than this is likely considered a fault. Each fault awards a point to the opposing team.

Each point starts with a serve. Players must serve the ball from behind the end line to the opponent's inbound area and obey the service order.

The first team to 21 wins a set, and the first team to two sets wins the match. If a third set is needed, it is played to 15. Each set must be won by two or more points.

Beach volleyball can be a very difficult sport to learn. Many beach volleyball players have prior experience with traditional indoor volleyball, and this can be a good starting point as the two sports share similar hitting skills.

How is beach volleyball different from regular volleyball?

What do you wear to beach volleyball?

Pages Related to What is Beach Volleyball?