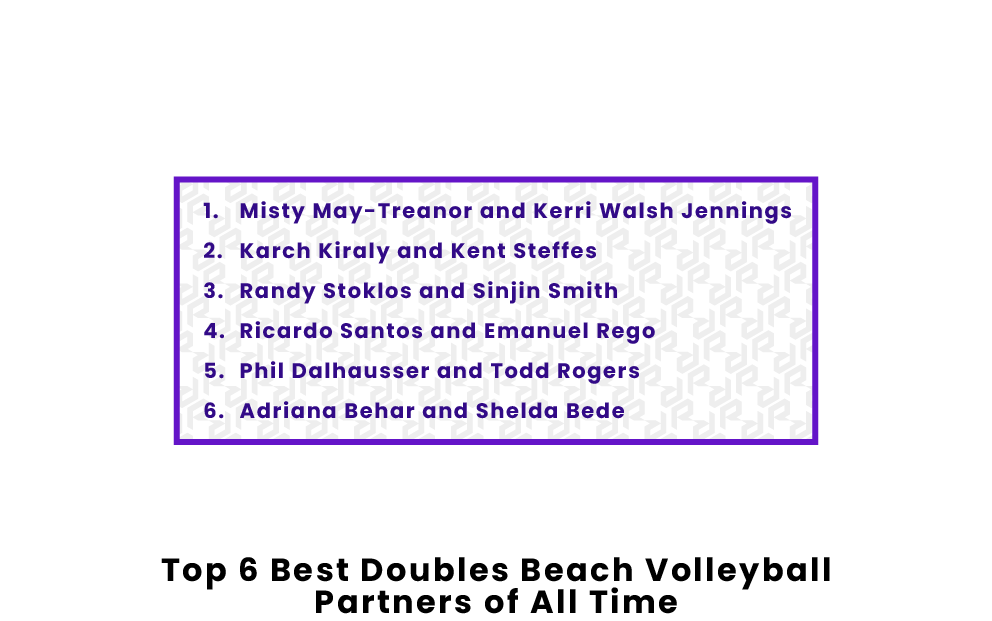 Although beach volleyball is newer to the Olympics than most events, with its inaugural year in 1996, it has a long history of remarkable athletes that have helped gain the sport international prestige. The game requires a captivating combination of speed, strength, and collaboration that is no better exemplified than by the teams listed here. Below is our ranking of the six best doubles beach volleyball partners of all time.

Who are the best doubles beach volleyball partners in the world?

When it comes to beach volleyball, Misty May-Treanor and Kerri Walsh Jennings have become synonymous with the sport. Their partnership began in their early 20s and lasted almost 12 years, during which they were absolutely dominant. They exploded onto the scene as a team in 2001 on the Fédération Internationale de Volleyball tour and were named champions in 2002.

At their peak, the duo had a winning streak of 112 matches and 19 tournaments. They were named FIVB Beach Volleyball World Champions in 2003, 2005, and 2007 and secured Olympic gold in 2004, 2008, and 2012.  In addition to both of their obvious athletic prowess, throughout their career, the pair has displayed a level of commitment, mental strength, and collaborative spirit that has kept them on the Olympic podium longer than any other beach volleyball team in history.

The pair was dominant in the early 1990s and won 63 of 75 matches during a stretch at their peak. In 1997 they decided to split, and Steffes retired just two years later. Kiraly went on to continue competing until 2007. The pair won 110 AVP tournaments together, made Olympic history, and are remembered as one of beach volleyball's greatest partnerships.

Stoklos and Smith began their legendary partnership in 1982 and went on to win 114 of their record 235 tournaments together. They partnered for over a decade and helped to broaden the global acceptance of beach volleyball. They won the very first FIVB tournament in Rio and went on to win ten of the 12 they participated in over the years.

Although their tenure was before beach volleyball made it to the Olympics, few players have had such a monumental impact on the sport, and in 2022 the team is still credited with the most wins of all time, with 114 professional tournament wins. They were on the podium 80% of their careers, and fans were shocked when the pair parted ways in 1993.

Ricardo Santos and Emanuel Rego first partnered in 2002 and steadily rose through the ranks, winning the World Championship in 2003 before claiming gold in the Athens Olympics in 2004. During their partnership, they made the podium 58 times and claimed 44 titles.

They went on to win bronze in the Beijing Olympics before the pair split up in 2009. They made a brief comeback as a duo from 2014-2015, just before Rego’s retirement in 2016. Rego stepped away from the sport with a record seventy-five FIVB titles and five Olympic appearances to his credit. Santos extended his career significantly on the AVP tour and hopes to end it at some point after playing alongside his son Pedro, who plays in the Brazilian tour.

Phil Dalhausser and Todd Rogers formed their team in 2006, and in just their second season together, they claimed the FIVB World Championship. They earned the Olympic gold medal at the 2008 Beijing games, the third American men’s team in history to do so after the US lost to Brazil in 2004.

They secured the AVP tour Championship five times and were the first beach volleyball men’s team in history to win the Fédération Internationale de Volleyball World Championship. The pair helped define beach volleyball’s new era. In 2012 after a highly successful seven-year run, Dalhausser made the decision to switch teammates as Rogers began cutting back on his playing time.

Adriana Behar and Shelda Bede have been a staple of the international scene, partnering in 1995. The two had had little success paired with other players but, when combined, became a dynamic force on the sand. The pair's journey was almost over before it began when Bede was in a car accident. She suffered extreme damage to her right hand and was told she would never play again, but rather learned to hit with her left and went on to have a remarkable career.

In the late 1990s, the pair were consistently placing second or first and are still one of the most successful international teams in history. During their dominant career that spanned almost a decade, they collected 31 FIVB international beach volleyball tournament wins, including an impressive streak from 1997 to 2001 and two silver medals at the Sydney and Athens Olympics.

Who are the best doubles beach volleyball players in the world?

Misty May-Treanor and Kerri Walsh Jennings are widely considered the best doubles beach volleyball players in the world. They’ve competed against many of the greats and hold a record three Olympic gold medals, which they won consecutively in 2004, 2008, and 2012.

Who has won the most doubles beach volleyball matches?