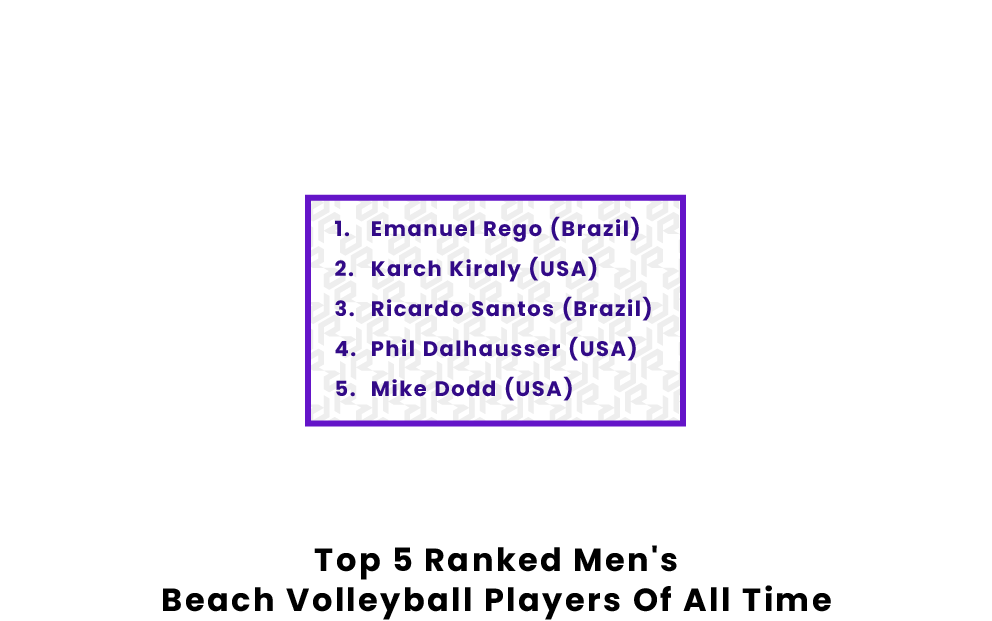 Beach volleyball is a highly competitive sport that has been played for over a hundred years. The sport takes place on a sand court with a net in the middle to divide both sides. Each team consists of two players who must work together to score points by landing the ball within the boundaries of their opponent’s side of the court. Beach volleyball is played both recreationally and professionally, and has been an official Olympic sport since 1996. Below are some of the world’s best men’s beach volleyball players to ever play the sport.

Who are the best men’s beach volleyball players of all time?

When talking about beach volleyball, it is impossible not to mention Emanuel Rego. Emanuel, arguably the best Men's Beach Volleyball Player of all time, has won every single trophy a beach volleyball player can win, with over 150 first-place finishes through his 20-year career. Emanuel's greatness is not only seen through his medals but also through his consistency throughout the years. He participated in five different Olympic Games, winning a gold medal, silver medal, and bronze medal. His last participation was in 2012, where he won the silver medal at the age of 38.

In addition, Emanuel also has 3 FIVB Beach Volleyball World Championship titles, including one played in Brazil in front of his own nation. Although his numbers speak for themselves, Emanuel's behavior on the sand contributes to his consideration as one of the best to ever play the sport. Emanuel was a very calm and analytical player, leading by gaining the respect of everyone in the beach volleyball world.

The most successful period of Emanuel's career was while partnering with another of Beach Volleyball greats, Ricardo Santos. Together, the double won the Olympic Gold in Athens 2004 and have a 289-55 FIVB record in their time together. Ricardo and Emanuel are widely regarded as the best beach volleyball double ever. Besides Ricardo, Emanuel had other partners and was successful with every single one of them, another proof of his talent, leadership, and consistency. Curiously, Emanuel was inspired to start beach volleyball after watching the next player on our list, Karch Kiraly.

Few players, if any, have been as successful on the court and on the sand as Karch Kiraly, and few will ever be. Kiraly is an athlete of extreme skill and dedication, which allowed him to become the "sport-changing" athlete that he has become. After winning two Olympic gold medals and two FIVB MVP awards as an indoor volleyball player, Kiraly decided to change scenes, retiring from the court and getting into the sand and beach volleyball at the age of 32. He had played beach volleyball before, during his teen years, but never professionally.

Kiraly's first partner was Kent Steffes, playing in the American-based AVP tour, winning 74 AVP opens during his first four seasons. As beach volleyball became an Olympic Sport in 1996, Kiraly and Steffes were a dominating force, winning the first-ever men's beach volleyball Olympic gold medal, his third volleyball Olympic Gold. Playing through his 40s, Kiraly continued to be a dominant player, making his presence felt on the AVP tour and beating significantly younger players.

Karch Kiraly's playing style was legendary. He was one of those players who understands what being an athlete really means and what it takes to achieve success in the sport. He was known as a fierce competitor with an unflinching focus, whose skill and natural talent, in addition to the discipline and will, made him one of the best volleyball players ever.

With probably the coolest nickname in beach volleyball, Ricardo "The Block Machine" Santos is one of the most skilled players in beach volleyball history. Ricardo’s blocking ability was his greatest strength, but he was still with a complete package when it came to attacking. Santos won the FIVB Offensive Player of the Year three times. The balance between defense and offense is a big part of Ricardo's success. The athlete has won numerous individual awards because of his skills while also managing to win countless competitions with many different partners.

Ricardo's best double during his career was unquestionably with Emanuel Rego, who is also present on this list. After playing for 20 years and participating in four editions of the Olympic Games, Ricardo made his debut at the AVP, defeating important doubles and gaining notoriety despite being past his prime. The beach volleyball legend won the AVP's Newcomer of the year award. In the first three seasons in the AVP, Ricardo has finished third in all of them, making it to the podium.

Phil Dalhausser is the kind of player who is always working on his game, looking to improve all aspects of it. Proof of that is seen in his many, many individual awards mentioned above. Phil has won FIVB's Best Hitter, Best Spiker, Best Server, Best Setter, among others. If all those different awards weren't enough to show you that Phil was always evolving his game, he also won FIVB's Most Improved Player in 2006, at the prime of his career. Like the other players in this list, Phil Dalhausser is a beach volleyball legend and has the reputation, awards, statistics, and tournament wins to back that up.

Mike Dodd is one of beach volleyball’s greatest players not only because of his accomplishments on the sand court, but also because of his legacy and impact on the sport outside of it. After a successful playing career, Mike Dodd did not get away from beach volleyball, but instead stayed involved. Dodd's playing career started at a very young age. At 16, he already showed he had the talent to be a top beach volleyball player. At college, Dodd was also a star basketball player, proof of his athleticism and talent for sports. He ended up being selected in the NBA draft by the San Diego Clippers. Luckily for volleyball fans, he chose beach volleyball over basketball, where he found extensive success.

Dodd started playing professionally in the early 1980s when beach volleyball was not as big as it is today and saw the sport grow before his eyes. During the 80's, Dodd won 6 Manhattan Beach Opens in 8 years, with his partner Tim Hovland. At a time where beach volleyball had less international presence, Dodd was absolutely dominant in the United States, winning a total of 72 events in his home country throughout his career. Still, when the time came, he also proved his value internationally, finishing second in the 1996 Olympic Games.

From a different time, Mike Dodd was a raw volleyball player who trash-talked and wanted to win more than anything. He brought that personality to his post-beach volleyball career. Dodd coached men's and women's beach volleyball for Italy and the United States. He also served as an analyst for television during the Olympics and even went on to become the AVP's commissioner. Mike Dodd has truly made his mark in beach volleyball, and will likely continue to do so.

Sean Rosenthal is a renowned beach volleyball veteran and former Olympian. He is often referred to as “Rosie”, but has also garnered the nickname “Superman” for his impressive jumping ability. Sean began his professional career at the young age of 17, choosing to join the AVP in lieu of college. Early in his career, he won the AVP’s Best Server award in 2002 and was also named as FIVB’s Top Rookie in 2006. As his career progressed, Rosenthal built an impressive resume consisting of 10 FIVB Gold Medals, 12 AVP first place tournament finishes, and 60 AVP podium finishes over 20 years. In 2012, Rosie earned FIVB’s Most Outstanding Player award while his duo with Jake Gibb took home the FIVB Tour Championship and was named FIVB Team of the Year. He also represented the USA along with Gibb in the 2008 and 2012 Olympics, with their team placing fifth both times. Sean Rosenthal will be entering his 21st season as a professional beach volleyball player, boasting longevity that most athletes in the sport haven’t been able to sustain.

Todd Rogers is a highly decorated beach volleyball player, who won 52 AVP titles, 24 FIVB gold medals, and Olympic gold at Beijing 2008. He also represented the United States at the London 2012 Olympics, but did not take home a medal. He and partner Phil Dalhausser were one of the most dominant beach volleyball duos of all time, winning gold together in Beijing, along with earning AVP “Team of the Year” honors three times.

Jake Spiker Gibb (yes, that’s really his middle name) is an American beach volleyball player on the AVP Tour. Unlike most other beach volleyball superstars, Gibb did not start playing the sport until he was 21 years old. He has represented the United States in four separate Olympic games: Beijing 2008, London 2012, Rio 2016, and Tokyo 2020. He and his old partner, Sean Rosenthal, go down as one of the best duos in the history of the sport. In more recent years, he has partnered with Taylor Crabb, amassing eight AVP titles and earning the “Team of the Year” honor in 2019.

Which men’s beach volleyball player holds the record for most career wins?

How much money do beach volleyball players make?

What country has won the most Olympic gold medals in men’s beach volleyball?

The winningest country in the history of men’s beach volleyball is the United States. They hold this distinction with a total of three Olympic gold medals, earned in 1996, 2000, and 2008. This string of success was attained on the back of all time greats like Karch Kiraly and Phil Dalhausser. The country in second place in terms of Olympic success in men’s beach volleyball is Brazil, which has earned a total of two Olympic gold medals in the sport. Their medals were earned in the 2004 and 2016 Summer Olympics.