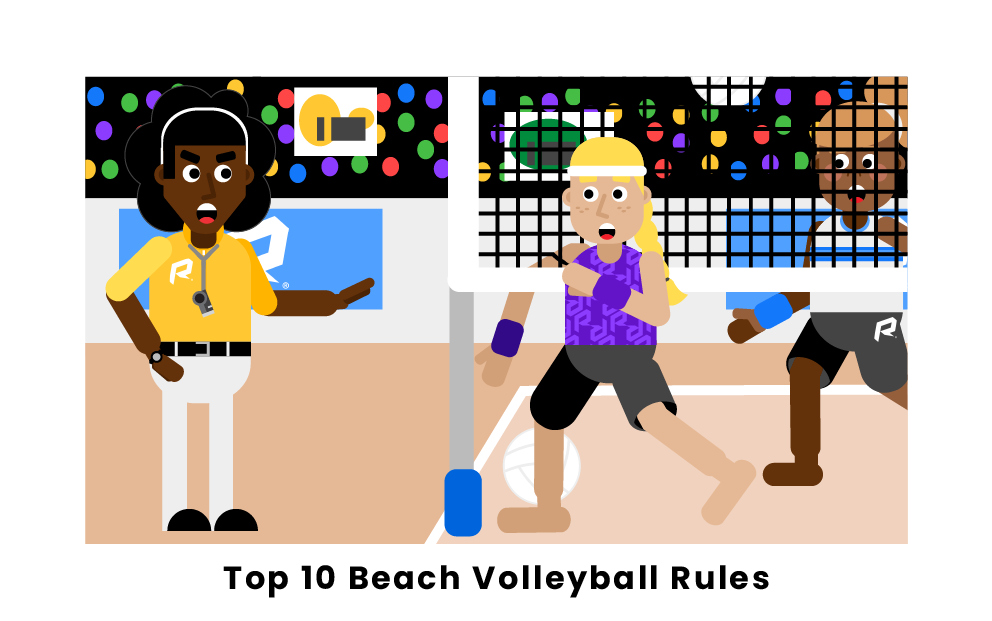 What are the most important beach volleyball rules?

The objective of the game is to successfully ground the ball on your opponent’s side. The term ground refers to the ball landing in the sand. The ball must land, in bounds, in the sand on your opponent’s side to be considered a point. If a ball grounds on the sand outside of the boundaries, the last person to touch the ball will reward a point to the other team. Other points may be awarded due to the faults or penalties awarded to your opponents. While you are aiming to ground the ball on your opponent’s side, you are trying to prevent that from happening on your side of the court. It is a game of defense and attack. You must be strategic when attacking and be prepared to defend after you serve. Do not allow the ball to hit the sand on your side of the net or it will result in a point for your competitors! It is very similar to normal volleyball, but there are some slightly different game rules and you get to be outside on the sand and enjoying the sun!

The most important equipment of this sport is the actual volleyball! You want to make sure you have the correct type of ball when playing beach volleyball, as the ball is different compared to indoor volleyball. The ball is typically white or colorful in order to be easily seen by competitors. You can choose from a collection of beach volleyballs at your local sporting goods store. The ball needs to be made of a flexible material to avoid absorbing moisture. This flexible material is mostly in case of any rain or other unpredictable weather conditions that may occur while playing. Typically, the ball is slightly heavier and larger than a normal volleyball.

The most important difference is that beach volleyballs are typically less inflated than normal volleyballs. According to the International Federation of Volleyball, the inside pressure of a beach volleyball must be between 0.175 and 0.225 kg/cm2. Less inflation allows for a better grip and is easier for competitors to play with on an uneven playing surface like sand!

In beach volleyball, the number of participants from each competing side consists of only two players. This allows for a total of 4 players on the court. The players that are presented on the official scoresheet are the only individuals eligible to compete in the match. The two players are required to play barefoot, unless specified otherwise by the officials. Some participants may want to wear protective material on their feet due to certain weather conditions like hot sand on the court. In competition, the players on the same team must wear uniforms of the same color and style. The jerseys need to be numbered 1 and 2 respectively on the front of the jersey and must be displayed on the chest. If a player is competing without a jersey, their number will be visible on the front of their shorts. If these requirements are not met, an official may not allow for the match to start.

A team can earn a point in one of three ways. The first way to earn a point is simply grounding the ball on the playing court of your opponent. The second way to earn a point is if an opponent performs a fault. Four hits and if the same player hits a ball twice in succession are examples of faults. The last way to earn a point is if an opponent contracts a penalty. Some examples of penalties include delay of game or rude conduct. Officials will be taking score throughout the entirety of the match. There is typically a center referee and at least two other referees on either side checking for balls played out of bounds. All of these potential opportunities to gain points are left up to the discretion of the officials.

6. Three Hits Per Side Rule

When a ball is served over to one side, the defending team is allowed a maximum of three hits before having to return it back to the other side. A hit is when a player makes physical contact with the ball in order to keep it in play. Hits vary in each rally. A player can serve, spike, dig, set, and bump in a game of volleyball. The three hits typically start with a dig or pass into a set and then followed by a kill or a spike! Each rally is unique and may not even need three hits! If a team is unable to return the ball in 3 hits or less, they will be penalized with a fault. Make sure your teammate understands the rules and you don’t have more than 3 hits per rally!

No player can touch the ball two times in succession. This means if you hit the ball, you are not allowed to touch it twice in a row. If you hit the ball up and it doesn’t go over the net, your teammate is the only one allowed to touch it! Players want to make sure they either clear the ball over the net to their opponent or set their partners up with a great pass. This is called a Double Contact fault if a player touches the ball twice in succession. The ball is able to hit multiple parts of the body and count as a hit, only if they are hit at the same time. Sometimes you will even see players using their feet or head to keep a ball in play! You want to hit the ball when it’s your turn, but be sure to make room for your teammate as you are not allowed to hit it twice in a row!

Outside of a regular speed hit, you are not allowed to send the ball across the net with an open hand. It is not legal to tip the ball or make an offspeed hit with an open hand; it will result in a penalty and a point being rewarded to the other side. This type of illegal hit is called “finger action,” and if it occurs, the officials will call you for a penalty. In beach volleyball, you aren’t allowed to hit the ball open-handed, be very careful with your hand movements. It is important to remember this rule to avoid any penalties that will give your opponents a point advantage!

When setting a ball in beach volleyball, you are not allowed to have spin on the ball. This is unique for beach volleyball and a different rule from indoor volleyball. The spin must be very minimal or you will be called for a penalty. Spin helps a player control the flight of the ball in play, specifically when serving. You are allowed to have spin on the ball when serving, but not when setting the ball. Although, it is clear when setting, no spinning is allowed! This is one of the many offenses the officials are looking for, be careful when setting to have no spin on it.

The net divides the court in half. The ball must be sent over the net and land within the designated boundaries in order to be eligible for a point. The ball is permitted to touch the net, but the players are not. Players are allowed to come close to the net, for instances of blocking and attacking. However, if a competitor comes in physical contact with the net while in the action of playing a ball, it results in a fault. A player may not be able to touch the net themselves, but the ball is still in play even if it hits the net. There are many instances of the ball being hit into the net and the players scrambling to try to keep the ball from landing on their side! For beach volleyball, you are able to cross the centerline underneath the net to retrieve a ball only if you do not interfere with your opponent. This is prohibited in indoor volleyball.

Can you set in beach volleyball?

Setting is allowed in beach volleyball and is considered a very important part of the game. Players are not allowed to spin the ball while setting. Hands are much tighter together for a more effective set, all while keeping balance on the unbalanced sand. It is more difficult to set in beach volleyball due to the uneven surface of the sand, but with practice it will become easier and easier. Setting is a necessary technique!

Are you allowed time-outs or substitutions?

Since there are only two players on each team, no substitutions are allowed. Teams are allowed only one time-out per set and it must be called by the captain of the pair. This allows for players to catch their breath and strategize their next play to win the upcoming set. The timing of calling a timeout is important as it could slow the momentum of the game and give a team time to recollect themselves.

What score does beach volleyball go to?

A game is won by the pair of two that first wins two sets. Each set goes to 21 points, except a third set. If there is a third set, that means it is currently a 1-1 tie, therefore the game is only played to 15 points. A set can only be won if the leading team is winning by two or more points. No winner until you are up by at least two points!