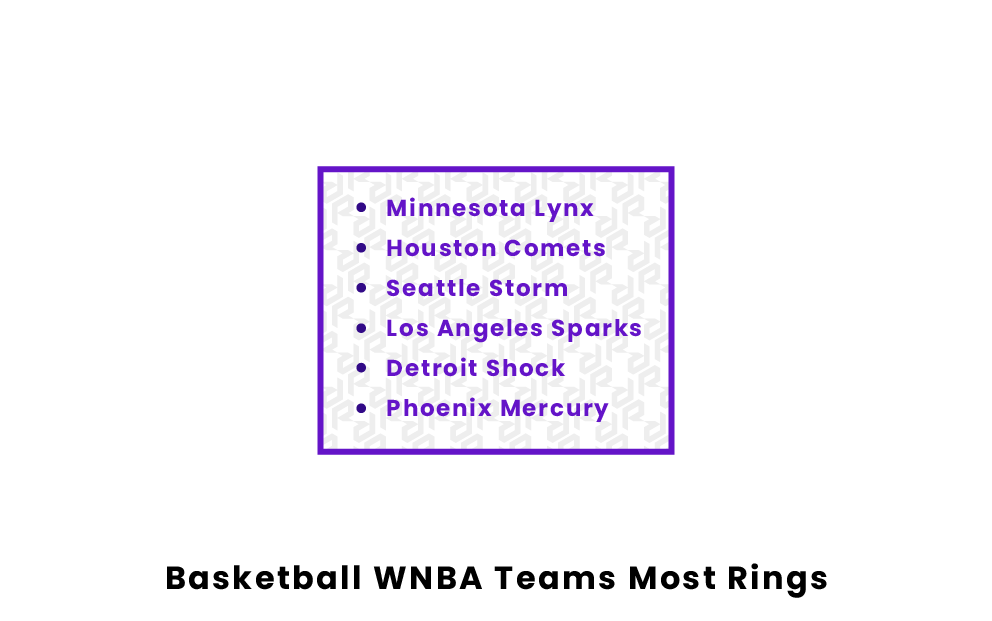 Every year, the WNBA Finals is hosted as a best-of-five series between the last two teams remaining in the playoffs. After playing 36 regular-season games and up to three rounds of postseason play, both teams compete to win it all. To learn more about which WNBA franchises have won the most rings in the league’s 26-year history, keep reading below.

Which WNBA teams have won the most Championship Rings?

The Minnesota Lynx have won four WNBA Championships in franchise history. They were the most dominant team in the WNBA in the 2010s, making it to the Finals six times from 2011-2017. They won four of those titles, tying them for the most rings of any franchise in league history. They won their most recent championship in 2017, led by MVP Sylvia Fowles when they took down the Los Angeles Sparks in five games to claim ring number four.

The Houston Comets are tied for the most WNBA Championships, with four. When the league was first founded in 1996, no team was more dominant than the Houston Comets. They went to the Finals in each of the first four seasons of the WNBA, winning them all in consecutive order. No other WNBA team in history has “four-peated” like the Comets did, though they fell on hard times during the Great Recession in 2008. With many people struggling financially, the team lost ownership and could not find a new owner, so they were forced to fold and disband from the league.

Tied with two other teams, the Seattle Storm have won the most WNBA Championships in history, with four. One of the best current teams in the WNBA, the Seattle Storm had a bit more spacing between their titles than the Comets did. They first won in 2004 but didn’t make it back to the Finals until 2010, when they won again. After a few years of mediocre basketball, they returned to win ring number three in 2018, and shortly after, they tied the league record with their fourth championship in 2020.

The Los Angeles Sparks have won three WNBA Championships. They were another team that started out hot following the WNBA’s creation. They went to the Western Conference Finals in both 1999 and 2000, but the following year they finally got over the hump. They would make three straight Finals appearances from 2001-2003, winning back-to-back in 2001 and 2002. 14 years later, they made their fourth Finals and won the 2016 championship, giving them three rings. They made it back the next year but lost to the Minnesota Lynx.

The Detroit Shock have also won three WNBA Championships, before moving cities a few times. The Detroit Shock was one of the best teams in the young WNBA. They made it to their first Finals in 2003 and won, but they weren’t done there. From 2006-2008, they appeared in three straight Finals, winning once in 2006 and again in 2008. However, following the next season, the team moved to Tulsa, and in 2016 they moved to Dallas and rebranded as the Dallas Wings. Since moving from Detroit, the team has not made it back to the Conference Finals.

The Phoenix Mercury have won three WNBA Championships in franchise history. In 1998, the second year of WNBA play, the Phoenix Mercury made it all the way to the Finals, only to lose to the Houston Comets. They were not very competitive for the next decade, but in 2007 they finished as the number one overall seed and won their first WNBA title. They would also secure the top seed in both the 2009 and 2014 seasons, also going on to win the Finals in both of those years. In 2021 as the fourth seed, they made an improbable run to reach the Finals yet again, but they were defeated by the Chicago Sky.

Which WNBA players have the most rings?

The player with the most rings in the WNBA currently is Sue Bird, with four. Bird has played her whole 20-year career with the Seattle Storm, leading them as their point guard to four titles over the past two decades. She is a 12-time All-Star and will make the Hall of Fame when she retires as one of the most legendary players in WNBA history.

Which WNBA team has won the most rings?

There are three teams tied with four rings in league history: the Houston Comets, the Seattle Storm, and the Minnesota Lynx. The Comets won all four of their rings in the first four years of the WNBA’s existence from 1997-2000. The Storm took a bit longer to win theirs, taking their first home in 2004, then winning again in 2010, 2018, and 2020. The Lynx dominated the 2010 decade, winning all four of their rings from 2011-2017.

Which WNBA teams have never won a ring?

Currently, there are six WNBA teams that have never won a ring: the Atlanta Dream, the Connecticut Sun, the Indiana Fever, the Las Vegas Aces, the New York Liberty, and the Washington Mystics. The Liberty holds the record for most Finals appearances without a ring with four. The Las Vegas Aces have the least amount of Finals appearances, making it just once in 2020 when they were swept by the Storm.