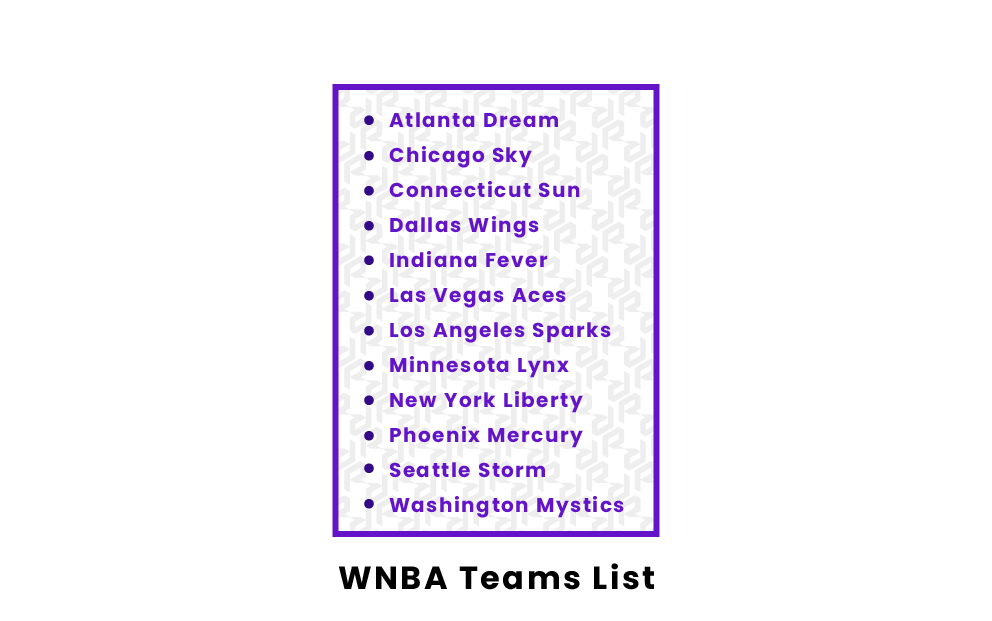 The Women's National Basketball Association (WNBA) is a professional sports league located in the United States of America. The league began in 1997 and currently has 12 teams split into two conferences: Eastern and Western. Eight of the 12 teams qualify for the playoffs each season, which take place over three rounds. The first round of the playoffs is a best-of-three series, while the semifinals and championship are best-of-five games.

What Are The Teams In The WNBA?

The Atlanta Dream were added to the WNBA as an expansion team in 2007. There was some concern about the interest level of fans in Atlanta, since the NBA Atlanta Hawks were struggling to draw crowds at the time.

The Dream have appeared in two WNBA Championships, in 2011 and 2013. In both finals, the Dream were swept by the Minnesota Lynx.

Chicago was awarded a WNBA team in 2005. Dave Cowens was named the first head coach and general manager of the team. Cowens, a former NBA player and coach, was 56 at the time.

The Sky have made it to the WNBA Finals twice, in 2014 and 2021. The Sky lost the 2014 finals 3-0 to the Phoenix Mercury. However, the Sky got their revenge in 2021, beating Phoenix for the franchise’s first-ever championship title.

The Sky are notoriously a tough team to play in the playoffs. Despite only making the playoffs eight times, the Sky have advanced to at least the semifinals five times.

The Connecticut Sun were originally founded as the Orlando Miracle in 1999, when the WNBA expanded from 10 to 12 teams. However, the team struggled financially and was eventually purchased in 2003 by the Mohegan Indian Tribe, the first Native American Tribe to own a professional sports franchise.

Following the purchase, the franchise was moved to Uncasville, Connecticut. The team was rebranded, taking on the name the “Connecticut Sun.” This is largely influenced by the Mohegan Sun Casino, also owned by the Mohegan Indian Tribe.

The Dallas Wings are one of the original WNBA franchises, although they first came into the league as the Detroit Shock. In 2009, the team relocated to Tulsa, keeping the nickname “Shock.” They moved again in 2015, this time becoming the Dallas Wings.

The most notable coach in the franchise’s history is Bill Laimbeer, who posted a 137-93 record from 2002 to 2009 coaching the squad, which was then the Detroit Shock. The franchise won all three of their championship titles under Bill Laimbeer in 2003, 2006, and 2008.

The Indiana Fever were one of the first expansion teams in WNBA history, added prior to the 2000 season. The Fever qualified for the playoffs 13 times in their first 17 years of existence, before entering a six-year playoff drought.

The Aces won their first-ever championship in franchise history in 2022, defeating the Connecticut Sun 3-1.

The first game of the inaugural season of the WNBA was played between the New York Liberty and the Los Angeles Sparks in Los Angeles.  Penny Toler, a player for the Sparks, scored the first-ever basket in WNBA history.

The Sparks moved from their original arena, The Forum, to the Staples Center in 2000. The new arena proved fitting for the squad, as they won back-to-back championships in their first two years in the new stadium. The Sparks nearly managed a three-peat, but fell one game short.

In 2016, the Sparks were once again crowned champions. Sparks’ player Nneka Ogwumike scored the championship-winning basket with three seconds remaining in a winner-take-all Game Five.

The Minnesota Lynx are one of the most successful WNBA franchises, with four WNBA championships: 2011, 2013, 2015, and 2017. The team is owned by Glen Taylor, who is also the majority owner of the NBA team the Minnesota Timberwolves.

New York was one of the original WNBA teams, and got the privilege of signing one of the first-ever WNBA players: Rebecca Lobo. Lobo was a superstar in college at UConn, and was highly-touted when the WNBA was formed. Unfortunately, Lobo was injured just two years into her professional career, and eventually had to retire due to lingering health issues.

The Liberty have the most finals appearances without a championship out of all WNBA franchises. They suffered four finals defeats, in 1997, 1999, 2000, and 2002.

The Phoenix Mercury are one of the original WNBA teams, and have played since the 1997 season. The Mercury appeared in the second-ever WNBA Championship, where they were defeated by the Houston Comets 2-1.

The Phoenix Mercury have won three WNBA Championships and appeared in five. Phoenix made the playoffs in three of their first four seasons before suffering a six-season playoff drought from 2000-2005. Since the drought, Phoenix has made the playoffs in 14 of the following 16 seasons.

The Seattle Storm were founded by Ginger Ackerley and her husband, Barry, prior to the start of the 2000 season. The Storm took over the stadium of a former ABL team: the Seattle Reign.

The Seattle Storm have four WNBA Championships, which is tied for first (the other teams with four championships are Minnesota and Houston).

The Washington Mystics are a WNBA team located in the nation’s capital: Washington D.C. The Mystics were one of the first expansion teams added to the WNBA. Washington won just three games their first season and lost 27. In 2000, their third season, the Mystics made the playoffs for the first time.

The Mystics lost the finals in 2018 and then rebounded to win the championship the following season in 2019.