Who are the Miami Heat's Biggest Rivals? 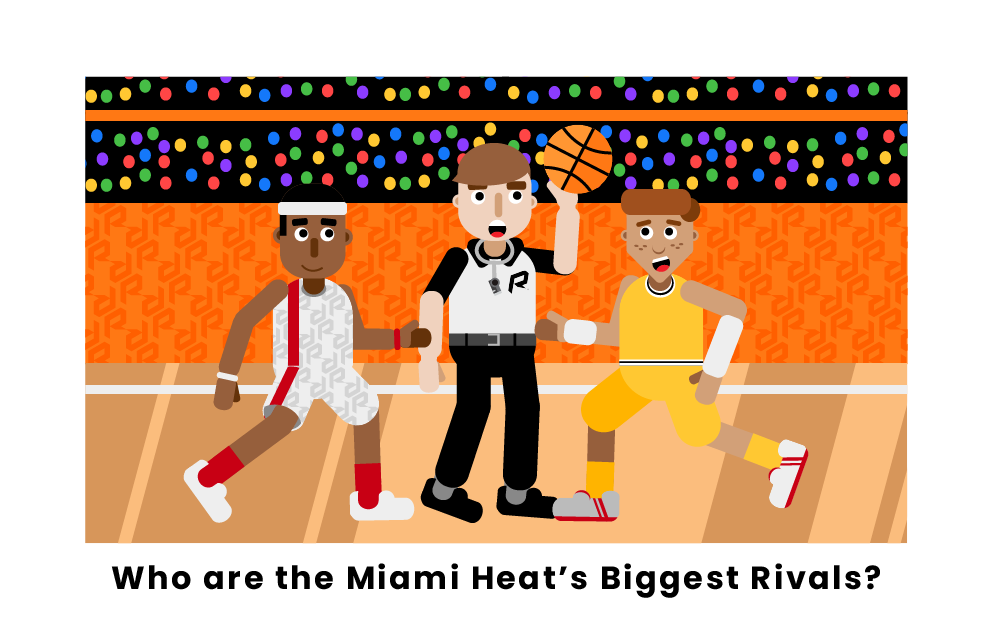 The Miami Heat’s biggest rivals are the New York Knicks, the Boston Celtics, and the Indiana Pacers. The Miami Heat are one of the NBA’s most popular franchises. This team has done it all, from featuring legendary players such as LeBron James and Dwyane Wade to winning three championships within seven years. Perhaps the best of the Miami Heat’s history comes from their rivalries with different teams over the years.

The rivalry between the Miami Heat and the New York Knicks began during the late 90s, a time where the Eastern Conference was finally becoming free from the reign of Michael Jordan and the Chicago Bulls. This rivalry was considered a historic one, as it was the only time two teams met in four straight postseasons, and each series went to a winner-take-all game. From 1997 to 2000, the Knicks vs Heat matchup was a staple in the Eastern Conference. The Knicks, led by Hall of Famer Patrick Ewing and a terrific supporting cast, were always on the verge of breaking through to the NBA Finals. With a similarly talented team with All-NBA performers Tim Hardaway and Alonzo Mourning, the Heat were also competing for the top spot in the Eastern Conference. One of the biggest games of the rivalry was Game 5 in the first round of the 1999 NBA Playoffs. Miami was the number 1 seed in the East, while the Knicks barely made it at number 8. However, the Knicks rallied to pull off a historic upset and beat the Heat on a game-winning floater by Knicks guard Allan Houston.

The Miami Heat and Boston Celtics rivalry came about during the early 2010s. In 2010,  the Dwyane Wade-led Heat took on a Celtics team that featured Paul Pierce, Kevin Garnett, and Ray Allen. The Celtics beat the Heat in five games and eventually went to the NBA Finals to face the Los Angeles Lakers. The following offseason saw the Heat acquire LeBron James and Chris Bosh in free agency to join Dwyane Wade. The Celtics have been consistently one of the top teams in the East, but the Heat were looking to cement themselves as the conference’s dominant team. In the 2011 playoffs, the Heat and Celtics met in the Eastern Conference Semifinals. The Heat got their revenge, beating the Celtics in five games. The third playoff matchup between these teams came in the following year’s Eastern Conference Finals. One of the biggest games in the rivalry came from LeBron in Game 6, where he dropped 45 points, 15 rebounds, and 5 assists to force a Game 7, where the Heat ultimately won the series.

The rivalry between the Miami Heat and the Indiana Pacers was advertised as the NBA’s next-best rivalry. With the Miami Heat’s Finals appearance in 2011, they proved to the NBA that they were a force to be reckoned with. The Indiana Pacers were the next up-and-coming team in the East, with young superstar Paul George and a solid supporting cast. In the 2012 Eastern Conference semifinals, the Pacers and Heat met in the playoffs, and the Heat beat the Pacers in six games. The following year saw them meet again in the Eastern Conference Finals, this time going to seven games. In that series, LeBron James averaged 30 points per game, with dominant performances to win the series for the Heat. The next matchup in 2014 was once again in the Eastern Conference Finals, where the Heat triumphed once again in six games. Although the Heat dominated this rivalry, it was one of the most intense and talent-filled rivalries in the modern NBA.

Are the Miami Heat and Dallas Mavericks rivals?

The Miami Heat and Dallas Mavericks are considered rivals due to their two historic NBA Finals in 2006 and 2011. In 2006, a young Dwayne Wade and veteran Hall of Famer Shaquille O’Neal led the Heat to the NBA Finals to take on the Dallas Mavericks. Dallas had been a force to be reckoned with for years, having many successful seasons but never making it to the Finals. In this matchup, Dwyane Wade had one of the best finals performances of his career, averaging 35 points, 8 rebounds, and 4 assists to propel the Heat over the Mavericks. In 2011, the same matchup appeared in the Finals, but the Mavericks were ready this time. Led by Dirk Nowitzki, the Mavericks beat the Heat in 6 games, cementing an upset victory to win their lone championship in franchise history.

Who is the Miami Heat’s biggest rival?

The Heat’s biggest rival is the Boston Celtics. While other rivalries within the Heat’s history have been spectacular in their own right, the rivalry between the Celtics has been the most consequential in recent memory. The Heat and Celtics matchups in the playoffs often would determine who would make it to the NBA Finals from the Eastern Conference. Both teams were considered within the upper echelons of the conference, so their battles had significant ramifications on who would become the NBA Champion that year.

Why are the Miami Heat and Boston Celtics rivals?

The Miami Heat and Boston Celtics are rivals mainly due to their playoff battles during the LeBron James era of the Miami Heat’s history. Many media members believed that LeBron James joined the Heat because he couldn’t beat the Celtics on his former team, the Cleveland Cavaliers. Both teams featured superstar-filled rosters that made this rivalry extremely entertaining. As a result, there was always tension when the two teams faced each other in the playoffs. In the 2011 playoffs, the Heat beat the Celtics handily in five games. However, in 2012, the Celtics played the Heat again and were on the verge of winning the series in Game 6. LeBron James had to have an incredible 45 point, 15 rebound performance to beat the Celtics in Game 6 and ultimately win the series in Game 7.

Pages Related to Who are the Miami Heat's Biggest Rivals?