Who are the Boston Celtics' Biggest NBA Rivals? 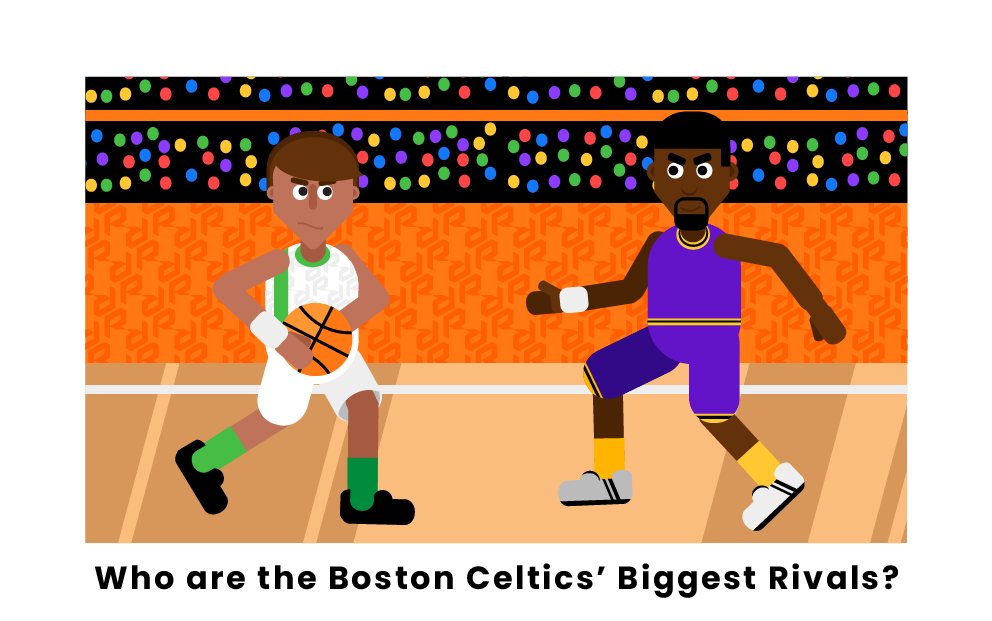 The Boston Celtics’ biggest rivals are the Los Angeles Lakers, Philadelphia 76ers, and the Miami Heat. The Boston Celtics are one of the NBA’s most storied franchises. They are tied for the most NBA Championships with 17, and the franchise is littered with Hall of Fame players from Bill Russell to Paul Pierce. But what really defines the Celtics are all the rivalries they have been a part of during their history.

The Boston Celtics and Los Angeles Lakers rivalry is the NBA’s premier rivalry, as it spans almost the entirety of the league’s history. With 17 championships each, these teams have always been competing at a high level. The Celtics and Lakers met in the NBA Finals a record-setting 12 times. Each of those meetings came with legendary duels between some of the NBA’s greatest players. In the 60s, the Celtics were loaded with some all-time great players, including Bill Russell, John Havlicek, and Sam Jones. The Lakers had greats like Jerry West and Elgin Baylor, but during this era, the Celtics dominated. They won all six of their Finals matchups against the Lakers. Once the 80s arrived, the Lakers were looking to finally win against the Celtics in the NBA Finals. Led by Hall of Famer Magic Johnson, Los Angeles took on the Celtics and Hall of Famer Larry Bird in three finals during the 80s. In 1985, the Lakers finally won against the Celtics. More recently, in 2008 and 2010, the two teams played for the championship as well, with the Celtics winning the first and the Lakers winning the second.

The Boston Celtics and Philadelphia 76ers rivalry is one of the biggest rivalries in the Eastern Conference. No two franchises have met more times in the playoffs than these two, a staggering 21 times in their history. This can also be considered one of the league’s longest rivalries, as their first matchup occurred in 1953. Back then, the 76ers were known as the Syracuse Nationals. They played in the playoffs a total of seven times within nine years, a stretch where Hall of Famer Bob Cousy and the Celtics won four out of seven. From 1965 to 1968, the now Philadelphia 76ers took on the Boston Celtics in the Eastern Conference Finals each year, a testament to how dominant these two teams were during the time.

Legendary players led both teams. The matchups in the 60s were headlined by 76ers center Wilt Chamberlain and Celtics center Bill Russell. In the 80s the two teams met four times, where they split the matchups with two wins apiece. Larry Bird, Robert Parish, and Kevin McHale led the Celtics, while Moses Malone and Julius Erving led the 76ers. Each of these marquee players was on the NBA's 75th Anniversary Team.

The Boston Celtics vs Miami Heat rivalry is a more recent rivalry compared to other rivalries in the NBA. The rivalry began in the early 2010s due to LeBron James’ move in free agency to the Miami Heat. Once he joined Dwyane Wade and the Heat, along with Chris Bosh, the media expected the Heat to be at the top of the Eastern Conference and contending for championships. However, the Boston Celtics just came off an NBA Championship in 2008 and another trip to the NBA Finals in 2010, where they lost. In the mind of the Celtics, they were still the best in the East and wanted to show the rest of the league that.

The two teams met in 2011, where the Heat quickly showed the defending East Champs that there was a new top team to beat. Miami won in five games. The two teams played again in the Conference Finals the following year, but it was not as easy for the Heat. Boston had a commanding 3-2 lead going into Game 6, where they could close out the series and head back to the NBA Finals for the third time in six years. LeBron James, however, had other plans. He had a historic performance scoring 45 points to force a Game 7 against Boston, ultimately propelling the Heat to victory.

Are the Boston Celtics and New York Knicks rivals?

The Boston Celtics and New York Knicks are considered rivals in the NBA. Not only are they in the same division in the Eastern Conference, but they also are two of the founding NBA teams that are still in their original city. They have been playing in the same respective cities since their inception, and they have had many matchups over the years. In a total of 14 playoff matchups as of 2021, they have split those games evenly, with each team winning seven series.

Who is the Boston Celtics’ biggest rival?

The Boston Celtics’ biggest rivals are the Los Angeles Lakers. This rivalry is considered the premier rivalry in NBA history because of all the incredible matchups they have had in the NBA Finals. They’ve met a record-setting 12 in the NBA Finals, where the Celtics have won nine out of those twelve games. This rivalry also comes from the fact that they both have 17 championships and have historically had great players and teams. From players like Kobe Bryant, Magic Johnson, and Kareem Abdul-Jabbar for the Lakers to Larry Bird, Bill Russell, and Paul Pierce for the Celtics, there was always Hall of Fame level talent on these teams.

Why are the Boston Celtics and Los Angeles Lakers rivals?

The Boston Celtics and the Los Angeles Lakers are rivals because of their history of winning championships and playing against one another for those championships. The two teams have a combined 34 championships split evenly between them. Of those 34 championships, 12 came from epic matchups between the two teams. While the Celtics have won nine out of twelve matchups, each series had memorable moments and games that highlighted the best of what the NBA has to offer.

Pages Related to Who are the Boston Celtics' Biggest NBA Rivals?