Which NBA Teams Have Never Won A Championship? 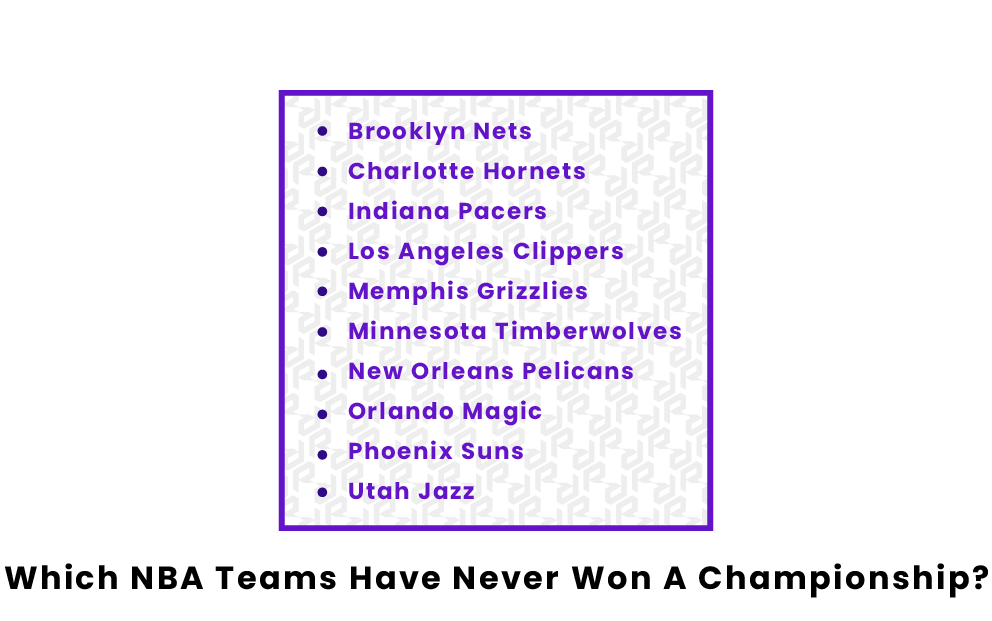 Winning an NBA championship is one of the most difficult feats in sports. The league has 30 teams, all filled with talent from across the globe, and the sport’s smartest minds come to America to coach their rosters to glory. Teams must survive an 82-game season, then advance through three rounds of Playoffs before reaching the Finals. Once there, it’s first to four wins, though not every city has seen their squad conquer that mountain. In fact, more than one-third of the league has never hoisted the Larry O’Brien trophy. Here, we take a look at all of the NBA teams who have never won a championship.

The Nets actually made it to the NBA Finals in consecutive years in 2002 and 2003, but they were unsuccessful both times, losing to the San Antonio Spurs in both years. In 2019, the team traded for Kevin Durant and signed Kyrie Irving, two of the game’s elite offensive players. However, injuries and close losses have prevented this team from advancing any further than the Eastern Conference Finals in recent seasons.

Though six-time champion Michael Jordan owns the Charlotte Hornets, the franchise itself has never even been to the NBA Finals. They were founded as an expansion team in 2002 as the Charlotte Bobcats and are infamous for owning the worst record of all time when they finished 7-59 during the lockout-shortened 2011-12 season.

The Nuggets did make it to the Finals in 1976, but they were playing in the ABA at the time and lost in six games. They have consistently been playoff contenders, reaching the Conference Finals four times in the past 35 years, but they have not been able to get over the hump.

Like the Nuggets, the Pacers were very successful in the ABA, winning three championships during their time in the now-extinct league. Since merging into the NBA, however, the Pacers have not been as strong, making just one Finals appearance in 2000, which they lost to the Los Angeles Lakers in six games.

For many years, the Clippers were the laughingstock of the NBA, failing to compete for decades at a time. Recently, however, the team has had much more success, though they still remain without an NBA Finals appearance. The only time they advanced to the Western Conference Finals in franchise history was in 2021, though without star Kawhi Leonard, they lost to the Phoenix Suns in six games.

The Grizzlies are one of the younger teams on this list, having been added to the league as an expansion team in 1995. Since then, they have been to the playoffs a number of times but have never made it to the Finals. Their best run came in 2013 when they made it to the Conference Finals, only to get swept by the San Antonio Spurs.

After losing in the Western Conference Finals in 2004, the Timberwolves went on the longest modern playoff drought in the league, failing to get back to the postseason until 2018. That year, they lost in the first round, and shortly afterward, the team was dismantled. The Timberwolves have never made the NBA Finals and are one of the least successful teams in NBA history when it comes to the playoffs.

Originally founded in 1988 as the Charlotte Hornets, the team moved to New Orleans in 2002. Between the two cities, the organization has never appeared in an NBA Finals and, in fact, has never even reached the Western Conference Finals. Their best season came in 2007-08 when they made it to the Western Conference Semifinals against the San Antonio Spurs, but they lost that matchup in Game Seven.

The Magic were one of the few expansion teams to really hit the ground running, making the Playoffs just four years after being added to the league. The next year in 1995, they made it to the Finals against the Houston Rockets, but were swept in four games. They would return in 2009 against the Los Angeles Lakers, but they were not much more successful, losing in five games.

The Suns have been to the NBA Finals three times, the most of any team on this list, but they have the same number of rings as these other teams do. They first advanced to the championship round in 1976, but they were taken down in six games by the Boston Celtics. Nearly thirty years later, they returned to face the Chicago Bulls in the 1993 Finals, but they were once again bested in six matches. In 2021, the team made it back for a third time and faced the Milwaukee Bucks, but, as fate would have it, they lost yet again in six games.

Pages Related to Which NBA Teams Have Never Won A Championship?