Where Is Basketball Most Popular? 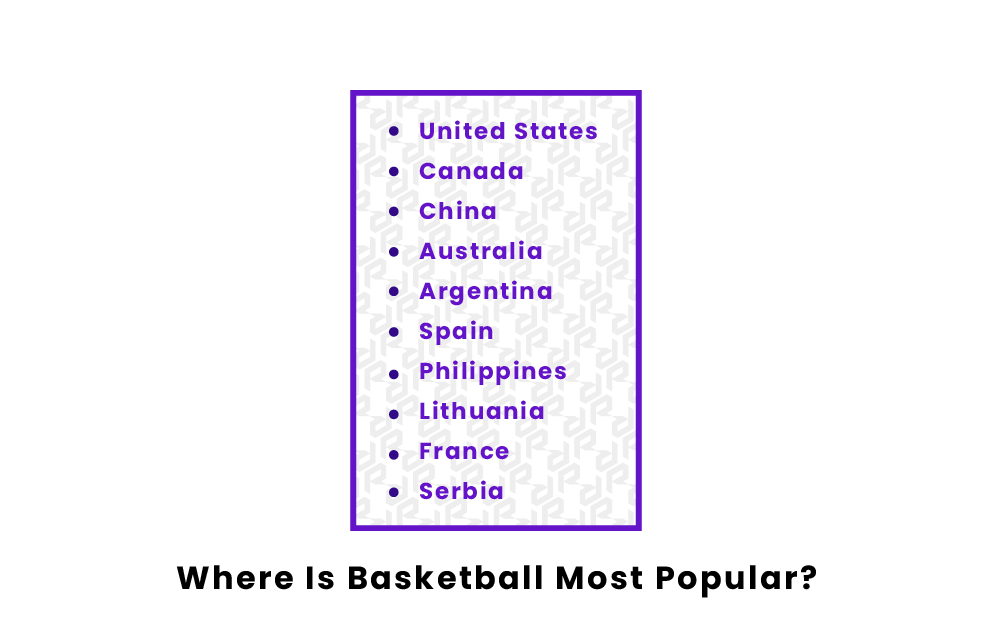 Basketball is one of the most popular sports in the world. Courts can be found in every corner of the Earth, and billions of fans tune in to watch the sport. What makes basketball so unique is that, unlike most other sports, there are strong communities on every continent. It’s rare to find a place where the locals don’t know about basketball, and the game is becoming increasingly global. With more and more international players finding success in the NBA, the game is drawing more fans than ever. Keep reading to learn about where basketball is most popular.

Basketball is most popular in the United States. The U.S. is home to the NBA, the highest-level basketball league in the world. Players from all over the world come to play in the league, which is seen as the most prestigious league for players. Basketball was created in 1891 in Massachusetts, and so the game got its start in the United States.

Basketball players are among the most famous athletes in American pro sports and are usually recognized anywhere they go. LeBron James, one of the game’s greatest players, has over 100 million followers on Instagram, and many other players have followings in the tens of millions. In addition, several NBA stars such as Kevin Durant and Kyrie Irving are active on Twitter, where they engage with fans and detractors alike.

The winner of the NBA Finals, played at the end of each season, is declared the “World Champions,” and for a good reason. The NBA is filled with international players, the best of the best from countries all over, and championship teams usually heavily feature many of these players. Furthermore, the USA National Team routinely dominates at the Summer Olympics, winning the last four gold medals and eight of the last ten. There’s no doubt that the pinnacle of basketball and the sport’s popularity resides in the United States.

Seeing how America is the most popular spot for basketball, it’s no surprise that neighboring Canada also features a rabid basketball scene. The country has produced several NBA players over the years, and there are currently 23 Canadian-born players in the league. Although youth basketball in Canada is filled with future stars, when it comes time for college, many athletes choose to move south to the United States. In fact, no one has ever appeared in an NBA game after playing college basketball in Canada. The sport’s top universities are all located within the U.S., and the ability to easily immigrate prompts Canada’s top players to seek scholarships from American universities.

Another country with an avid appreciation for basketball is China. The country is home to the Chinese Basketball Association, or CBA, one of the top professional leagues in the world. Despite the high level of play seen in the CBA, Chinese players rarely cross over to America. Since 1946, there have been only seven Chinese-born players in the NBA, and there are currently no active Chinese players.

Interestingly enough, it is actually fairly common for players from the U.S. to go to China. Many athletes who are not good enough for the NBA or began playing in the league but could not secure another contract decide to go overseas, and China is a very popular landing spot. In the 2021-2022 season, there were 39 American-born players in the CBA, a number that has been growing for the past few years. In addition, the NBA and China have numerous ties, with players often making trips to China during the offseason as well as there being a large number of NBA fans in the country.

Other countries where basketball is popular include Australia, Argentina, Spain, Serbia, and the Philippines. All of these countries have professional leagues that feature high levels of competition. In addition, countries like France and Lithuania produce impressive basketball talent, with both countries boasting numerous players currently in the NBA. For some countries, the popularity of basketball can be directly tied to one or two superstars in the NBA. Giannis Antetokuonmpo, a two-time league MVP, grew up in Greece and has popularized the sport there with his success in the NBA. Another foreign-born player who has made the game bigger in his home country is Joel Embiid, who was born in Cameroon. The list goes on and on when it comes to players like these, such as Nikola Jokic from Serbia and Luka Doncic from Slovenia, showing that basketball is truly a global game.

Pages Related to Where Is Basketball Most Popular?