What Is The WNBA Draft? 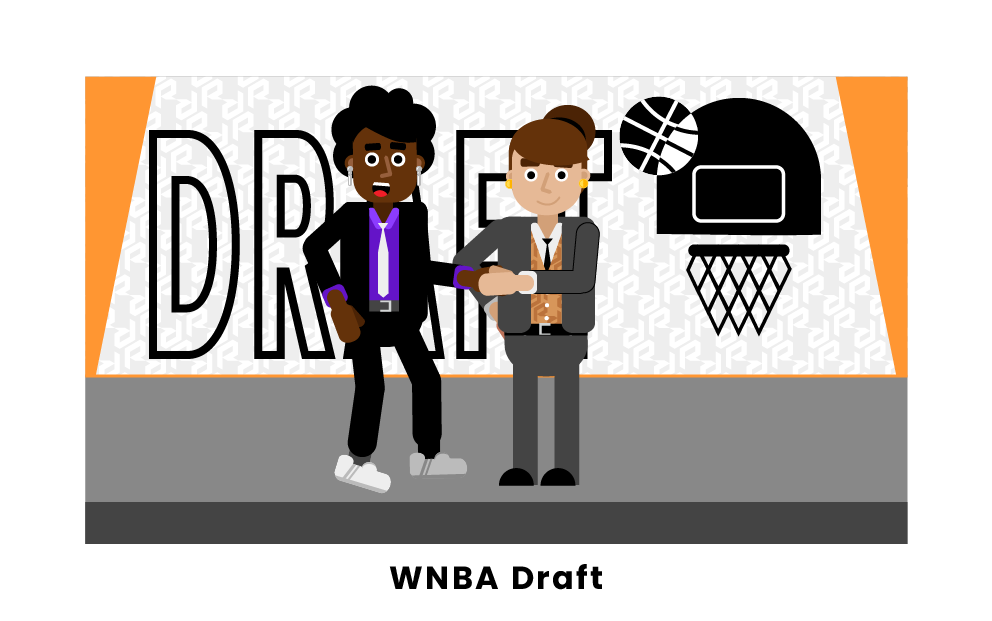 The WNBA draft is an event held once a year following the conclusion of the WNBA season and during the off-season. The date of the draft varies, but it is typically held in April. This event allows all of the existing teams in the league to select players from some of the top college and international basketball programs in a three-round draft. There are 12 selections in each round, one pick allotted per team per round, for a total of 36 players drafted.

The inverse standings from the previous year decide the draft order, with poorly performing teams getting better picks and the well-performing teams getting picks later in the round. However, there is an exception for the top four picks; these are known as "lottery picks” and are drawn randomly to decide the order of the top four picks in the draft. Lottery picks are determined by the cumulative records over the last two seasons of the four teams that didn’t make the past season’s playoffs. The team with the worst record is awarded the best odds for drawing the number one pick, followed by the team with the second-worst record, and so on.

In the lottery format, the team with the worst record over the last two seasons gets a 44.2% chance of receiving the first overall pick, the second-worst team gets a 27.6% chance, third-worst gets a 17.8% chance, and finally, the fourth lottery team receives a 10.4% chance at the first overall selection.

The draft lottery is only implemented in the first round and is not used for the second and third rounds. This means the second and third rounds will be in the exact order of the inverse standings from the past season. Teams are allowed to trade their picks in the draft for other players or picks if they want, and due to this, not every team is guaranteed to make a selection in each round every year.

With only 36 selections allowed each year, the path to the WNBA is a crowded one, and there are specific requirements players must meet to qualify as draft-eligible. Some of these requirements include; the player turning 22 years of age within the draft year (20 for international players), renouncing their college eligibility, and having been four years removed from high school or having graduated from a four-year college.

The first-ever WNBA Draft was held in 1997 and formatted very differently than the draft we see and recognize today. During this draft, 16 players were assigned to individual teams; this draft included notable players such as Cynthia Cooper and Michelle Timms. The next section of the draft was labeled the "WNBA Elite Draft," which allowed former professional players to be selected by the inaugural teams. Following this, a four-round draft of all other prospects was held. This four-round format was then the standard for following drafts, outside of expansion draft. In 2003, the three-round format with 12 selections each round became the standard, and it has stayed that way since.

The first-ever inaugural WNBA Draft was held in 1977, split into three parts, and included the following teams; Houston Comets, Sacramento Monarchs, Los Angeles Sparks, Cleveland Rockers, Utah Starzz, New York Liberty, Charlotte Sting, and the Phoenix Mercury. The first of these parts, the player allocation portion, took place on January 22, 1997, and had 16 players selected during this portion, with Vicky Bullett of Maryland being the first-ever player assigned to the Charlotte Sting, one of the eight original WNBA teams. The second portion took place on  February 27, 1997; the "WNBA Elite draft," and each team was given two selections during this section; Dena Head from Tennessee was selected first overall in this round by the Utah Starzz. The final portion of the first-ever draft occurred on April 28, 1997, with four rounds in total and eight selections each round.

What team has had the most #1 overall picks in the WNBA Draft?

Since the WNBA draft was created in 1997, the Seattle Storm holds the record for having the most number one overall selection(s), with four in total. These players were Lauren Jackson, Canberra Capitals (2001); Sue Bird, Connecticut (2002); Jewell Loyd, Notre Dame (2015); and Breanna Stewart, Connecticut (2016). This shows that getting the number one overall pick in the WNBA requires more than just a poor record; it also requires some luck.

What College team has produced the most #1 overall picks in the WNBA Draft?

UConn holds the record for having the most players selected first overall, with a stunning five number one selections. These selections included legendary players Sue Bird, Seattle Storm (2002); Diana Taurasi, Phoenix Mercury (2004); Tina Charles, Connecticut Sun (2010); Maya Moore, Minnesota Lynx (2011); and Breanna Stewart, Seattle Storm (2016). UConn also has the distinction of having the most players taken in the first round overall, with an equally impressive 25 players taken since 1997.

Pages Related to What Is The WNBA Draft?