What Is The NBA Draft? 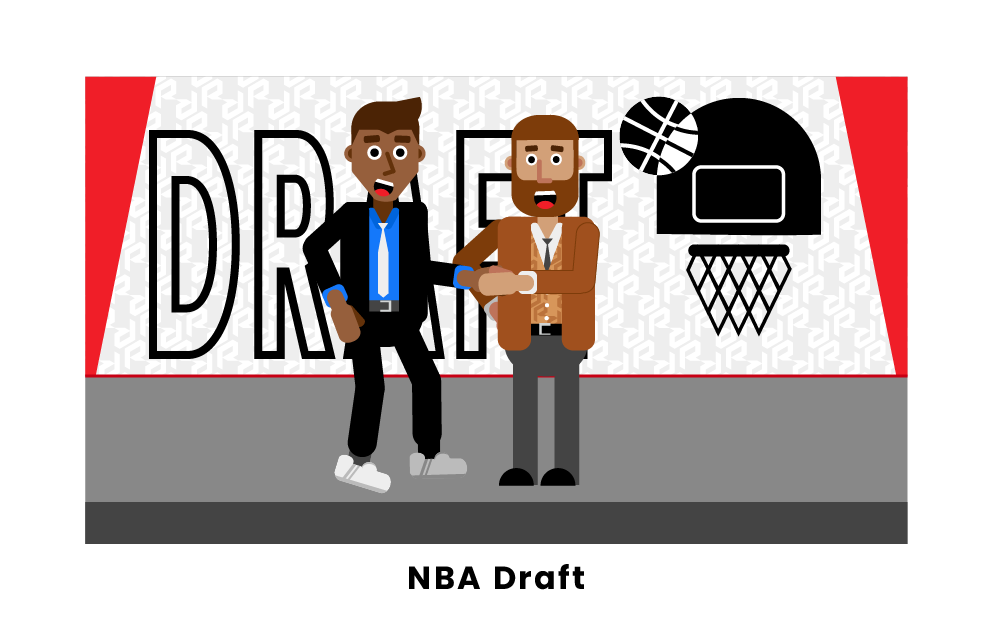 The NBA draft is an annual event held in June after the NBA finals conclude each year. Basketball’s rising stars from around the world hope to be part of the lucky group selected by NBA teams and start their professional journey, while many others go undrafted.

The NBA draft dates all the way back to 1947, when Clifton McNeeley was the first overall pick of the Pittsburgh Ironmen. Over the decades, many things have changed in the NBA, and the draft has evolved along with the league. For example, the draft was reduced to just three rounds in 1988, and the following year, just two rounds, a format that the league has stuck to this day. Prior to that point, it had been ten rounds until 1985, when it became seven rounds. As the league expanded with more teams in the 1990s and 2000s, the draft lottery was expanded as well.

Over the years, the NBA draft has made monumental shifts in the dynamics of the league. For example, in 1984 and 1985, the league saw perhaps its two greatest draft classes of all time, with several future Hall of Fame players drafted. Legends such as Michael Jordan, John Stockton, Charles Barkley, Karl Malone, and Patrick Ewing were taken high in their respective drafts, and those players led by Jordan went on to revolutionize the NBA and transform the lucky teams that were able to draft them. Every year teams hope they can find similarly transcendent players in the draft, and for that reason, it and the lottery presentation have become spectacles marked on every NBA fan’s calendar each year.

The NBA draft lottery began in 1985 after the Board of Governors agreed to change the format of the draft. This new system would allow the non-playoff teams each year to enter the lottery for the best picks in the draft. During the previous 18 years, the worst team from the Eastern and Western Conferences would flip a coin for the top pick in the draft, with the remaining teams placed in the inverse order of their record. This system allowed the worst teams to have the chance at the best incoming rookies each year.

The league spent the next several years making minor tweaks to the lottery process. For example, in 1986, the league decided that the lottery would only determine the top three picks, with the rest decided by record. Then, in 1990, they increased the lottery to include 11 teams. It was in that same draft that a weighted system was adopted to give the teams with the worst records better odds of landing the top pick. In 1994, the now-famous ping pong ball system was put in place. This change also came with improved odds for the team with the worst record, now giving them a 25% chance of landing the top pick in that year’s draft.

As the league continued to add expansion franchises, the lottery continued to grow in turn. In 1995 the lottery was increased to include 13 teams and again in 2004 to make it an even 14. The most recent set of changes occurred in 2017 when the league decided there was a need to address concerns of tanking. With the worst overall record having such considerably higher odds of winning the lottery and landing the first overall pick, there was concern teams at the bottom of the standing would not have enough competitive incentive and would instead try and lose for the top pick. Therefore, it was decided that starting in the 2019 draft, the three teams with the worst records in the league will have even 14% odds of winning the lottery, with the odds for the remaining teams reducing by record. In this current structure, only the top four picks are randomly selected, with the remaining picks being set by inverse order of record.

While the NBA draft lottery determines the draft order of the 14 non-playoff teams each year, the rest of the picks are determined by regular season record and finishing position in the playoffs. This is a similar method to other leagues and is designed to give the teams a chance to catch up with the best in the league by adding higher-rated young talent. However, every year trades shake up the draft order with players and picks being exchanged as every team tries their best to put together the best team they possibly can. Sometimes, picks are exchanged in trades that extend years into the future before anyone knows the order of those drafts.

Pages Related to What Is The NBA Draft?