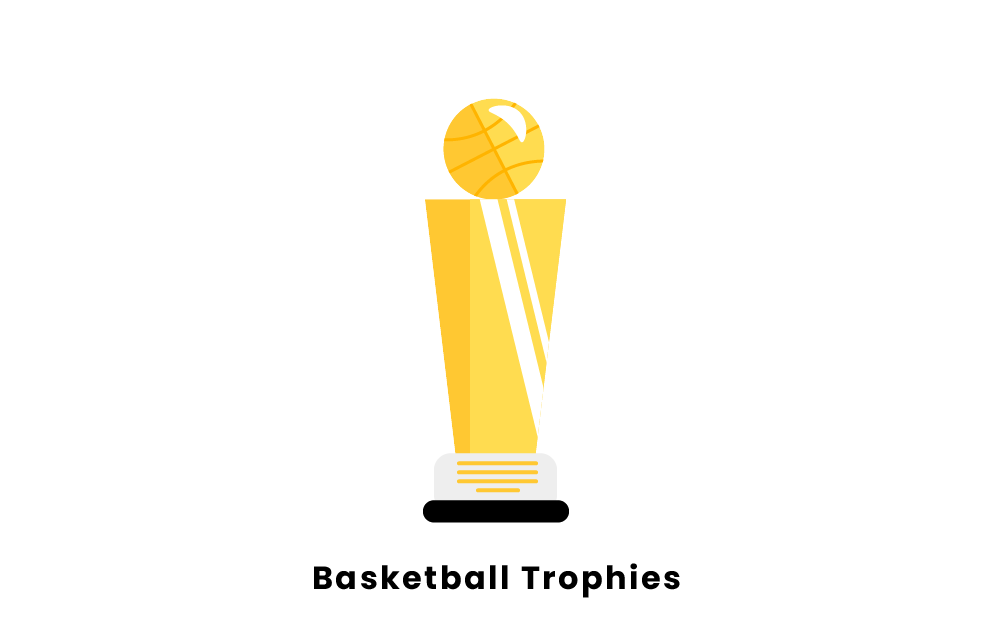 There are many different trophies that basketball players can earn during their careers. They include:

The championship trophy given for basketball is called The Larry O' Brien trophy, and is earned by the NBA team that wins the NBA Postseason.

The trophy itself is in the shape of a basketball net with a single rod extending from the base of the trophy to the ball.

The Larry O'Brien trophy was created in 1978 by the National Basketball Association (NBA). It's name was changed in 1984 in honor of Larry O' Brien, a former NBA Commissioner. Who was the commissioner from 1975-1984 and was later inducted into the basketball hall of fame for his work.

From 1964-1984 the trophy was known as the Walter A. Brown trophy, and before that it was simply called the NBA Finals trophy.This is the only trophy awarded for team success for basketball and also the most important one.

The MVP award is awarded for greatest individual performance in the regular season.

The NBA Finals MVP award is awarded for the greatest individual performance in the NBA Finals.

Defensive Player of the Year Award

The Defensive Player of the year award is given to the best individual defender during the regular season.

Sixth Man of The Year Award

The Sixth Man of the year is awarded to the best player who isn't a starter.

The Most Improved Player award is given to the player with the greatest improvement from their prior season.

The John R. Wooden Award, more simply referred to as the Wooden Award, is an honor given to the best player in college basketball for a given season. The award recognizes the most consistent performers in both men's and women's basketball. It is named after former UCLA head coach John Wooden, who is widely regarded as one of the greatest college basketball coaches of all-time.

While there is no specific criteria for the award other than being deemed "the best" college basketball player in the nation, statistical performance is the most important determining factor in deciding who receives the honor. Wooden Award winners generally post a significant number of points, rebounds and assists (passes leading to a made shot) on a game-to-game basis, leading their respective teams to a winning record by contributing in a variety of different ways.

Aside from being labeled college basketball's player of the year, each Wooden Award winner also receives a trophy and a scholarship grant for their college. Thus, the award has implications beyond the individual player, providing the university with the funds required to admit future athletes that could not otherwise attend the school without financial help.

What are the trophies in the NBA?

Which team has the most NBA trophies?

Who makes the Larry O'Brien Trophy?

The NBA championship trophy has had the same design for over 40 years, and has been made by the same company, Tiffany and Co, since the 1978 season.

How much does the Larry O'Brien trophy weigh?

The trophy itself is two feet tall and made of 16 pounds of sterling silver, with a 24 karat gold overlay on top of the silver.

How much is the Larry O'Brien trophy worth?

So even though the trophy is not entirely all gold it is still very expensive at an estimated $13,500 dollars from the silver plus gold overlay.