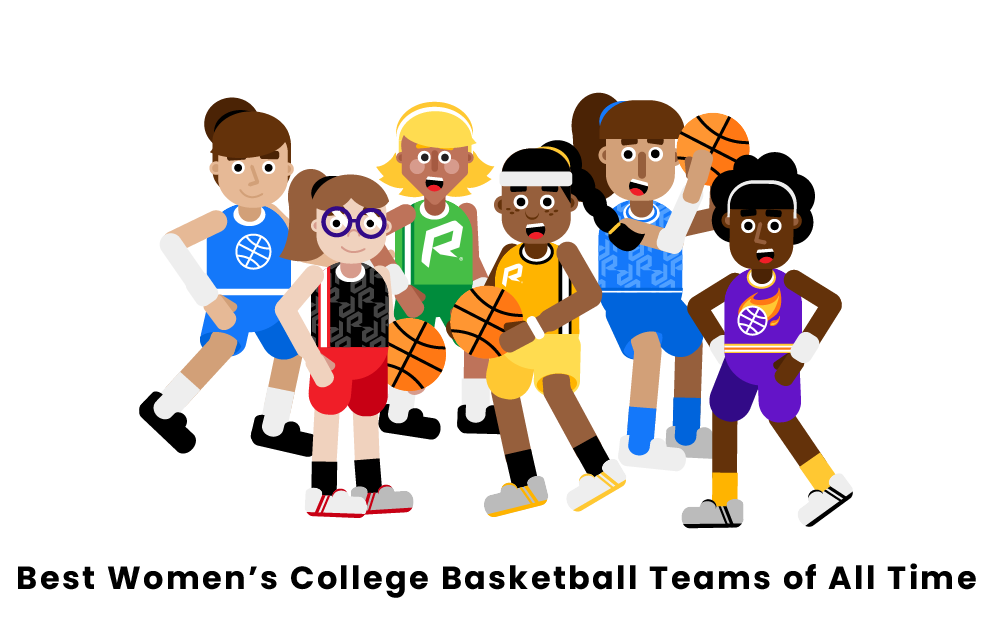 Women’s basketball became an official NCAA Division 1 sport in 1982, and since that time, a few programs have separated themselves from the rest of the country with unrivaled success. Read on to learn about the top six best women’s college basketball programs of all time.

What are the best women’s college basketball teams of all time?

UConn has been the most dominant women’s college basketball program over the past 25 years. They have racked up a record 11 NCAA championships and put together one of the most impressive win streaks in college sports, winning 111 games in a row. They have spent time in the Big East and Atlantic Coastal Conferences and have won a total of 25 conference titles. Their head coach Geno Auriemma is one of the most respected coaches in basketball. He consistently brings in elite talent that wins not just at the NCAA level but professionally and internationally as well. Women such as Sue Bird, Swin Cash and, Asjha Jones belong to a distinguished group of 11 players that have won an NCAA championship, a WNBA title, and Olympic and FIBA World Cup gold medals.

The Tennessee Lady Volunteers are easily one of the greatest women’s basketball programs of all time. Their eight NCAA national championships rank second in history behind UConn, and longtime head coach Pat Summitt is revered as one of the greatest leaders in all of sport. The Lady Vols have won 17 SEC tournaments and over 400 regular-season conference games, playing out of the Southeastern Conference. Perhaps the greatest player in the program’s illustrious history is Candace Parker, who became the first woman to dunk in an NCAA tournament game in 2006 and then went on to lead the 2007 and 2008 Lady Vols to back to back NCAA titles.

The Louisiana Tech Lady Techsters were the first dominant team in women’s college basketball as they earned a spot in each of the first two national championship games. Led by their playmaking point guard Kim Mulkey, the Lady Techsters won the title in 1982 and lost to the University of Southern California by just two points the following year. The Lady Techsters continued to be one of the best programs in the 80’s and 90’s, appearing in the title game four more times and compiling a winning percentage that ranks third all time among all women’s basketball programs.

Stanford has earned their spot on this list by winning three national championships since 1990. Stanford has consistently produced some of the WNBA's best players throughout their storied history, including 13 women drafted in the first round of the WNBA college draft. Two of the best players from that list are sisters Chiney and Nneka Ogwumike. Both sisters became first overall picks after their award-winning college careers ended. That incredible group of talent helped Stanford make 14 final four appearances and win their conference, the PAC-12, 14 times.

Baylor has won three NCAA national championships but has made history in other ways as well. The Lady Bears have won 21 conference titles overall, including ten straight, one of the best marks in history. During that run which started in 2010, the Lady Bears carried a conference record of 168-7, indicating their level of true dominance. In 2016 the Lady Bears set an incredible NCAA record by scoring 140 points in what turned out to be a 108 point victory, the widest margin in the history of Division I women’s basketball. Extraordinary talents such as Brittney Griner have helped to make this run of dominance possible for Baylor.

The University of Texas has only won one NCAA national championship, but they did so in excellent style by finishing the 1986 season 34-0. Throughout their history, they have been one of the dominant teams in the Big 12 conference, winning a total of 22 conference championships. In 2020, the University made a coaching change to try and get the team back on top by hiring two-time national coach of the year winner Vic Schaefer. Overall, the Lady Longhorns have produced elite talent, such as recent first overall pick Charli Collier and two-time Naismith trophy winner Clarissa Davis.

Old Dominion isn’t as notable of a school as some of the other names on this list, but the success of their women’s basketball program is undeniable. The program has a long track record of success, bolstered by their 22 Conference Titles between the Sun Belt Conference and the Colonial Athletic Association. In addition to conference dominance, the program also won the 1965 NCAA Championship and stands eighth all time in total wins amongst all D1 women’s basketball teams. Their most notable player of all time is Nancy Lieberman, affectionately known as “Lady Magic, who is an Olympic silver medalist and WNBA Hall of Famer. Lieberman has the most assists and steals in Old Dominion women’s basketball history.

The South Carolina Gamecocks have rapidly risen through the ranks of women’s basketball in the last two decades, cementing themselves as one of the best programs in women’s basketball history. Most notably, the Gamecocks have secured two NCAA championships (2017 and 2022) which places them in a tie for the fourth-most titles in NCAA history. They’ve also come out victorious in six SEC Tournaments. With so much success, it should come as no surprise that the Gamecocks have produced phenomenal WNBA players such as A’Ja Wilson, Alaina Coates, and Shannon Johnson.

Notre Dame carries legendary status in regard to its athletics, and its women’s basketball team is no exception. The Fighting Irish are two-time NCAA Champions, which is tied for the fourth-most titles all time. They’ve also experienced immense success in conference tournaments, with five ACC Tournament wins, a Big East Tournament win in 2013, the 15th most wins in NCAA women’s basketball history. Top WNBA players to come from Notre Dame include Arike Ogunbowlae, Skylar Diggins-Smith, and Jewell Lloyd.

Which college has the best women’s basketball program?

Currently, the University of Connecticut has the best women’s college basketball program. Since the retirement of Pat Summitt, the legendary University of Tennessee coach, UConn has won four NCAA titles, and from 2009 to 2016, they won six of eight NCAA titles. Their head coach Geno Auriemma is considered to be a legend in his own right, and he consistently helps the team rejuvenate its talent by bringing in top-ranked recruits that have helped the program stay on top.

What was the best individual team in women’s college basketball history?

The 2002 UConn team is the best in women’s college basketball history. They went 39-0 and were only outscored in one half the entire season, the second half of a game they won by 21 points. They won the national championship by 12 points against Oklahoma, and then they sent four players to the WNBA, all of whom were drafted in the top six overall picks. The 2002 UConn team was loaded with talent and leaders like no other team in history.

What college has won the most women’s basketball championships?

Since women's basketball was first accepted as an official NCAA Division I sport in 1982, the University of Connecticut has won 11 NCAA women’s basketball championships, the most of all time, followed by the University of Tennessee with eight titles. UConn won their first NCAA title in 1995, and head coach Geno Auriemma has been at the helm for all 11 wins.