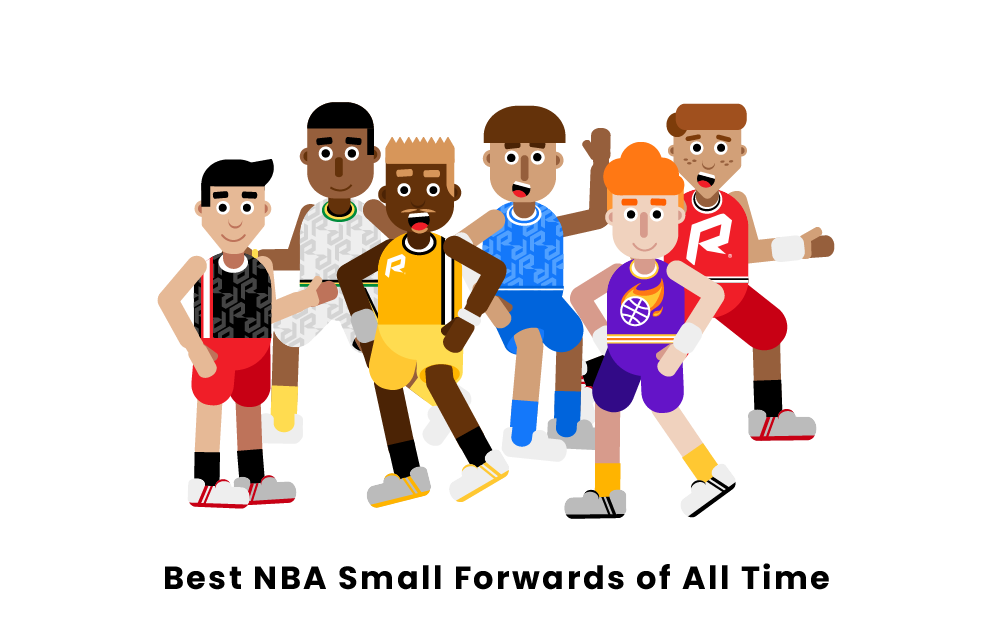 The small forward position in basketball features some of the game’s best and most versatile athletes. Players at this position are asked to do everything for a team, from shooting and rebounding to defending and passing. A good small forward plays like a jack-of-all-trades, but a great small forward masters every aspect. Below are the six best players at the position in NBA history.

Who are the best NBA small forwards of all time?

LeBron James is not only the greatest small forward of all time, many also consider him to be the greatest basketball player, period. James came out of high school as the most touted prospect ever, and he has more than lived up to that billing. He has won four MVP awards, four rings, and four Finals MVP awards so far. He is currently third all-time in points scored, but he is still active and is rapidly approaching second place. James is one of the best all-around players the game has seen, blending elite scoring ability with exceptional rebounding and passing, as well as high-level defense.

Though he may not have the athleticism that others on this list possess, Larry Bird was undoubtedly one of the most skilled players ever to handle a basketball. He was one of the game’s first great three-point shooters, and he constantly filled out every column of the box score. Bird won three championships during his time in Boston and also won three-straight MVP awards, one of only three players ever to do so. He was named an All-Star 12 times and also named to an All-Defense team three times. Bird was inducted into the Naismith Memorial Basketball Hall of Fame in 1998.

Kevin Durant is truly a one-of-a-kind player, combining size with agility to become one of the best scorers in NBA history. Durant has led the league in scoring four times, and many say he is the most effortless scorer in the game. He has averaged 27.1 points per game in his career, the fourth-most of all time. Durant is also able to use his extremely long frame as a rebounder and excellent defender. In 2017 and 2018, he won back-to-back championships and was named Finals MVP for both series.

While Durant’s scoring resume is impressive, there’s one player on this list who has averaged more points per game for their career. Elgin Baylor finished his career averaging 27.4 points per game, but he was also a terrific rebounder. His 11,463 rebounds are the most all-time by a small forward. Baylor was known to put up ridiculous numbers in his prime and was selected as an All-Star 11 times in his career. He also holds the dubious distinction of the most Finals appearances without a ring with seven. Baylor was inducted into the Naismith Memorial Basketball Hall of Fame in 1977.

Julius Erving, known as “Dr. J,” was one of the most athletic and spectacular players of his generation. He had an interesting career path, starting in the ABA, where he played five years before coming over to the NBA and finishing his career. In the ABA, he was named league MVP three times, a five-time All-NBA selection, and won two rings. His accolades in the NBA weren’t too bad either; he won an MVP award in 1981, was a seven-time All-NBA selection, and won a championship in 1983. Irving was inducted into the Naismith Memorial Basketball Hall of Fame in 1993.

Perhaps the greatest sidekick of all time, Scottie Pippen was the Robin to Michael Jordan’s Batman. The two teamed up to win six rings and dominate the NBA during the 1990s. Despite not receiving as much fanfare, Pippen was an outstanding player in his own right. He was a seven-time All-Star who was seen as one of the most well-rounded players in the league. Not only could he score and pass, but Pippen was also a lockdown defender. His ten All-Defensive team nominations are the sixth-most of all time, and he regularly guarded the opposing team’s best player. Pippen was inducted into the Naismith Memorial Basketball Hall of Fame in 2010.

Who is the best NBA small forward of all time?

The best NBA small forward of all time is LeBron James. Although James has a laundry list full of awards, his greatest accomplishment might be his longevity. Even in his late 30s, James is still putting up numbers on par with his career averages and, in 2020, won his fourth ring. His ability to score from anywhere on the court, as well as set up his teammates at any time, has put him in the conversation for greatest of all time.

What NBA small forward has the most points scored all time?

LeBron James has scored the most points of any small forward all time. He currently has scored upwards of 36,000 points. While James has the third-most points right now, that number is likely to change. He is quickly approaching Karl Malone for second place, and should he play another season it’s likely he will pass Kareem Abdul-Jabbar for first. James came into the league as a slasher with excellent finishing ability, but he has since developed a respectable three-point shot.

What NBA small forward has the most rebounds of all time?

Elgin Baylor has the most rebounds of any small forward all-time with 11,463 rebounds. Baylor put up some eye-popping numbers during his prime, pulling down over 14 rebounds per game in each of his first five seasons. What makes this record even more impressive is that Baylor’s career was limited by injuries to only 14 years, far less than many other all-time leaders.