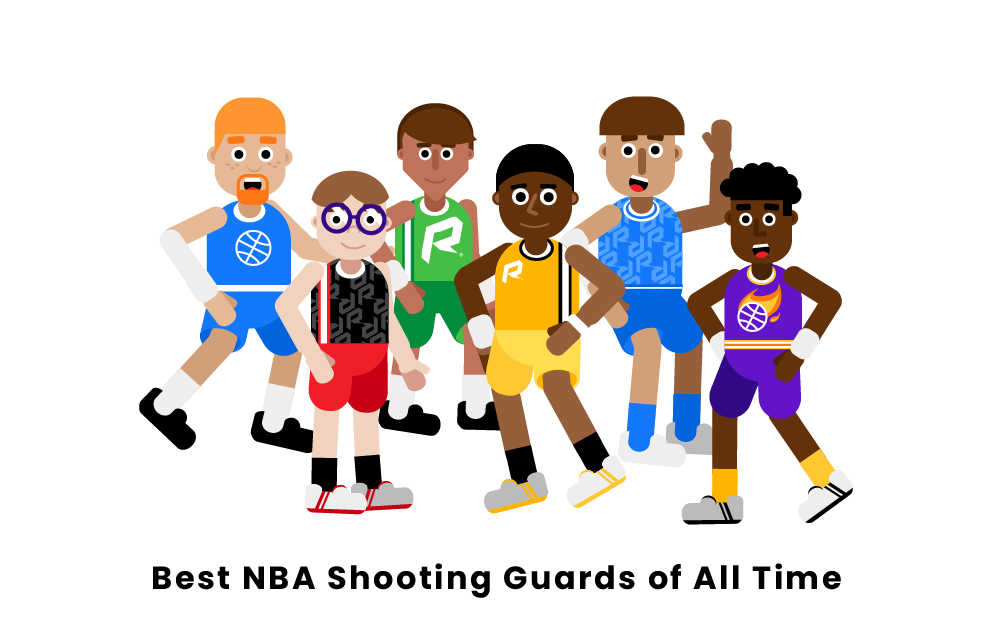 Who are the best NBA shooting guards of all time?

Michael Jordan was born on February 17th, 1963, in New York City, New York, and is often referred to as the greatest NBA player of all time. He began his college career in 1981 at the University of North Carolina, winning the national title his freshman year and player of the year his next two. Jordan was the third overall pick by the Chicago Bulls in 1984 before winning six NBA Championships and five MVP awards during his time with the team, including three consecutive championships from 1991 to 1993 and three consecutive from 1996 to 1998. In between his championship runs, Jordan spent the 1994 and 1995 seasons playing professional baseball for the Chicago White Sox before returning to dominate on the basketball court.

Kobe Bryant was born on August 23rd, 1978, in Philadelphia, Pennsylvania, and has one of the greatest legacies in NBA history. At just 18 years of age, Kobe Bryant was selected 13th overall by the Charlotte Hornets in 1996 before being traded to the Los Angeles Lakers, where he would play his entire career. Bryant concluded his career as the highest scorer in Lakers history, bringing three consecutive championships (2000-2002) to the team and two more in 2009 and 2010. Bryant also achieved 18 NBA All-Star appearances (second-most all-time), two finals MVPs, and an NBA MVP. Bryant tragically lost his life in a helicopter crash in January 2020, but players and fans continue to spread his legacy every day throughout the NBA and sports community.

Dwyane Wade was born on January 17th, 1982, in Chicago, Illinois. Wade played college basketball at Marquette University, which included a Final Four run in the NCAA Tournament in his junior year. In the 2003 NBA Draft, Wade was selected fifth overall by the Miami Heat, where he would spend the majority of his career. In 2006, just his third season in the league, Wade led the Heat to their first-ever NBA Championship and was named Finals MVP. A few years later, Wade teamed up with Lebron James, and together they brought the Heat to four consecutive NBA Finals and back-to-back NBA Championships in 2012 and 2013. Wade bounced around the league for a few years toward the end of his career but would return to the Heat for his final two seasons before retiring in 2019.

Allen Iverson was born on June 7th, 1975, in Hampton, Virginia, and is known as one of the most prolific NBA scorers of all time. In 1996, after two seasons at Georgetown University, Iverson was selected first overall by the Philadelphia 76ers, where he would spend the majority of his career. Iverson was known for his big personality and sheer scoring ability, revolutionizing the shooting guard position and winning four NBA scoring titles. Iverson won NBA MVP in 2001, the same year he took the 76ers to the Finals, where he would fall short of the title. This lack of a championship ring is about the only thing missing from Iverson’s resume.

Clyde Drexler was born on June 22nd, 1962, in New Orleans, Louisiana. Drexler played college basketball for three seasons at the University of Houston, and he would lead the Cougars to a Final Four run and a championship game appearance in his junior year. In the 1993 NBA Draft, Drexler was selected 14th overall by the Portland Trailblazers. He spent most of his career with Portland before joining the Houston Rockets in 1995, where he would win his first and only NBA Championship. Drexler retired as a player at the end of the 1998 season and went on to coach the University of Houston for two years.

Reggie Miller was born on August 24th, 1965, in Riverside, California, and is considered one of the greatest shooters of all time. He revolutionized the game and the shooting guard position with his 3-point shooting. Miller played college basketball at UCLA for four years before being selected 11th overall in the 1987 NBA Draft by the Indiana Pacers, where he would spend his entire 18-year career. While he was unable to lead the Pacers to a title, Miller is widely regarded as the greatest Pacer of all time because of his clutch three-point shooting and ability to lead his team to deep playoff runs. When Miller retired in 2005, he was the all-time NBA 3-point leader; however, this record has since been passed by both Ray Allen and Stephen Curry.

Who is the best NBA shooting guard of all time?

The best NBA shooting guard of all time is Michael Jordan, and he is widely regarded as the greatest NBA player of all time as well. During his 15 seasons in the league, Jordan won six NBA championships, six Finals MVPs, and five NBA MVPs. Jordan’s legendary career also included two Olympic gold medals, NBA Rookie of the Year in 1984, and being selected as an NBA All-Star in 14 out of his 15 seasons.

What NBA shooting guard has the most points scored all time?

What NBA shooting guard has the most assists all time?