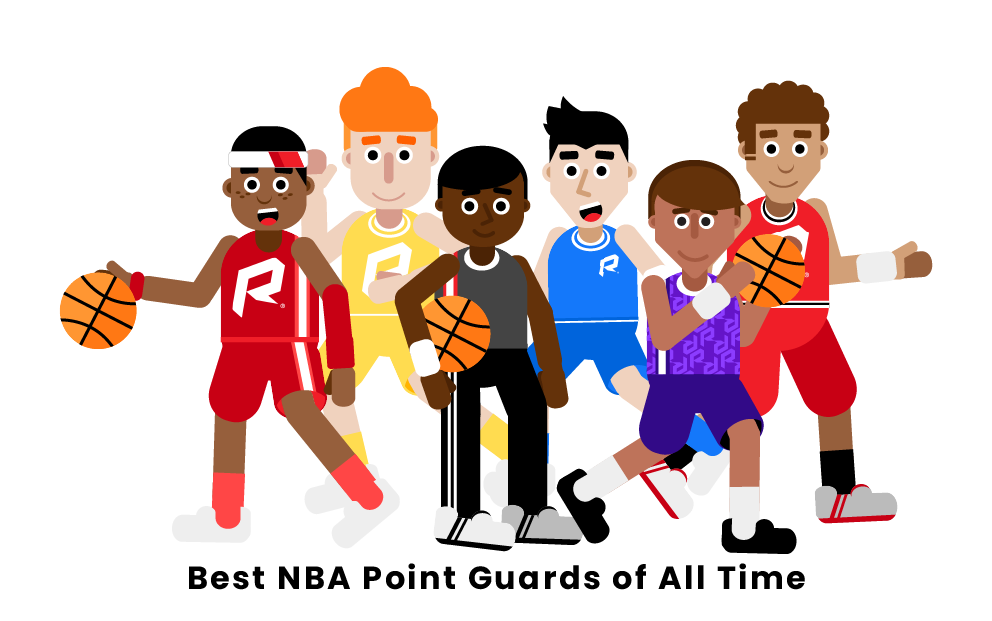 The point guard position in basketball is one of the most important. These players usually have the ball in their hands the most of anyone on the team, and they are tasked with running the offense. Being an elite point guard requires both scoring and playmaking ability, and the best to ever do it brought something extra to the position that was unlike any of their peers. Below are the top six point guards in NBA history.

Who are the best NBA point guards of all time?

Magic Johnson is probably the most emulated point guard in the history of the game. His knack for flashy passes and showtime plays instantly drove him to stardom with the Lakers. He made the All-Star team in 11 of his first 12 seasons and won three MVPs in a four-year span. Johnson led the league in assists four times and finished his career averaging 11.2 per game, the most all-time. Standing at 6’9”, Johnson possessed a rare combination of size and speed that allowed him to dominate across the court throughout his career. In 2002, he was inducted into the Naismith Memorial Basketball Hall of Fame.

Known as the “Big O,” Robertson was another larger-than-life point guard who took over all aspects of the game. During the 1961-1962 season, he became the first player ever to average a triple-double for the whole year, a distinction that stood until 2017. Robertson led the league in assists six times and, in 1964, was named the MVP. He also had a flair for the dramatic; he won three All-Star Game MVPs, tied for second-most all-time. Although he started his career in Cincinnati, Robertson is best-remembered for helping lead the Milwaukee Bucks to their first-ever championship in 1971. In 1980, he was inducted into the Naismith Memorial Basketball Hall of Fame.

Of all the NBA players to step on the court in the past decade, no one has transformed the game as much as Steph Curry. His elite ability to knock down three-point shots quickly earned him a reputation as a great shooter, but Curry took it one step further. He was one of the first players to start shooting from beyond the three-point line, sinking shots from unreal distances. In 2015, he won his first MVP award, and he backed that up by becoming the first-ever player to be unanimously named league MVP in 2016. He has helped lead the Golden State Warriors to three NBA championships and is also the all-time leader in three-pointers made.

If you look up the definition of point guard in the dictionary, you’ll likely see John Stockton’s face. The all-time leader in assists in NBA history, Stockton defined what it meant to run an offense at the highest level. He led the league in assists for nine-straight seasons and was named an All-Star ten times. Though he only averaged 13 points per game for his career, there’s no denying he was one of the most impactful point guards of the last century. Stockton was also an excellent defender, finishing his career with the most steals of all time (3,265). He was inducted into the Naismith Memorial Basketball Hall of Fame in 2009.

The Bad Boy Pistons were one of the toughest teams in the 1980s, and Isiah Thomas was their leader. Known for his toughness, there was also an elegance to Thomas’s game that elevated him to the NBA’s elite. He led the Pistons to three straight Finals appearances from 1988-1990, winning the latter two. He was named Finals MVP in 1990 and also won two All-Star Game MVPs in 1984 and 1986. Thomas was a five-time All-NBA selection and was named to 12 All-Star teams in his career. Unfortunately, injuries limited his playing time, and he was forced to retire at the age of 32. Thomas was inducted into the Naismith Memorial Basketball Hall of Fame in 2000.

Jerry West’s iconic driving pose has been immortalized as the NBA logo, but that’s not all he’s known for. West was a prolific scorer, averaging 27 points per game for his career. He was also one of the most complete players in the game at his time, showcasing an elite ability to rebound, pass, and defend. West helped lead the Lakers to nine Finals appearances, but he was only able to capture one ring in 1972. A 14-time All-Star, West was inducted into the Naismith Memorial Basketball Hall of Fame in 1980.

Who is the best NBA point guard of all time?

The best NBA point guard of all time is Magic Johnson. Johnson’s rare size at the position allowed him to play it unlike anyone else, and his highlight reel passes always left people’s jaws on the floor. In the 1980 Finals as a rookie, Johnson was forced to step in at center for the Lakers, and he responded by winning Finals MVP, the only rookie ever to do so.

What NBA point guard has the most points scored all time?

Oscar Robertson has the most points scored all-time for point guards with 26,710. Robertson was an all-around player, combining size and elite athleticism to dictate the game on the offensive end. He played before the time of the three-point line, but he loved to use his larger frame to dominate in the paint. Robertson averaged over 30 points per game six different times and led the league in scoring during the 1967-68 season.

What NBA point guard has the most assists all time?

John Stockton has the most assists all-time with 15,806. Stockton formed an elite pick and roll combination with teammate Karl Malone during his time in Utah, and he averaged double-digit assist ten times in his career. He is one of the best examples of a pure point guard who can set up the offense with passes that are both unexpected and accurate at the same time.